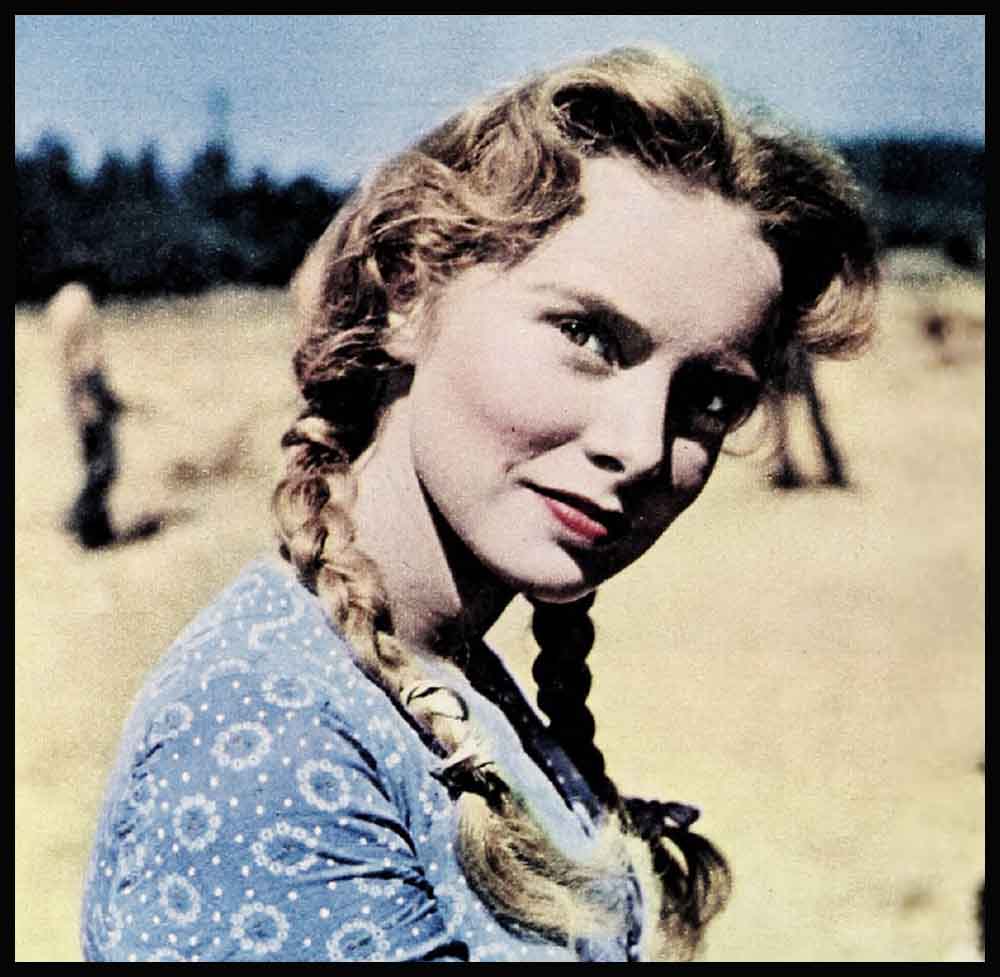 She dressed up in her best college tea frock the day Hollywood sent for her. She spent hours having her hair shampooed and dressed in a high, strictly sophisticated coiffure. In her upswept hair she pinned large purple flowers. And these she complemented with long purple gloves.

“You look fine. You look swell,” the agent said. “But now run home and de-glamorize. No make-up, hair loose—and wear a sweater and skirt.”

She did as he said. An hour later she returned with her honey colored hair loose; looking wistful and natural “Looking,” as Van Johnson says, “the way your grandfather would insist your grandmother looked when she was sixteen.”

Janet is Hollywood’s Cinderella, proof positive that a slim nineteen-year-old, just out of college, recently married, and without a thought in the world of becoming a movie star, can become just that.

It was Norma Shearer who was Janet’s fairy god- mother. Norma, vacationing at a ski lodge at Stockton, California, saw a picture of the receptionist’s daughter wearing ski clothes. “She ought to be in pictures,” Norma said. And, returning to Hollywood, she took the photograph of Janet with her. Within the week Janet herself was in Hollywood, wearing her purple gloves and flowers—until her agent sent her home to let down her hair and wash her face.

The agent knew, you see, that the role for which Janet was being considered was that of an Ozark mountain girl in “The Romance of Rosy Ridge.”

Two weeks later she was on her way to the Santa Cruz mountains for exterior scenes. She pitched hay, hauled water and gathered in the wheat. She learned, also, the gentle art of milking a cow. Her hands, nails broken, soon enough took on the authentic look of a farm girl’s hands.

“Still she was lovely,” according to Van Johnson. “There is something different, almost quaint about her. It takes more than a beauty shop to have a girl look as fresh as Janet did after a day’s threshing.”

Studio limousines transported them from their hotel to the farm where they worked every day. At an unearthly hour. Nevertheless, always, fans were lined up at the fence. Several autograph books were shoved at Janet. “Could we trouble you . . .”

Her face shone. “Oh, it’s no trouble,” she assured them. She was so excited she even forgot to be shy; as shy as she was when the other members of the company sat talking between scenes. At such times she would sit a little distance away knitting. After the first week, however, her husband sat beside her. She got so lonely being away from him, among so many strangers and with so much going on, that he took a job with the company to be near.

It looks as if Hollywood is to be their permanent address too. For when Metro executives saw the rushes of Janet in “The Romance of Rosy Ridge” they decided she was the girl for Walter Pidgeon in “If Winter Comes.” Then she was cast in “Hills of Home.”

From here we’d say it’s a safe bet that Cinderella Leigh’s Hollywood coach will not become a pumpkin.