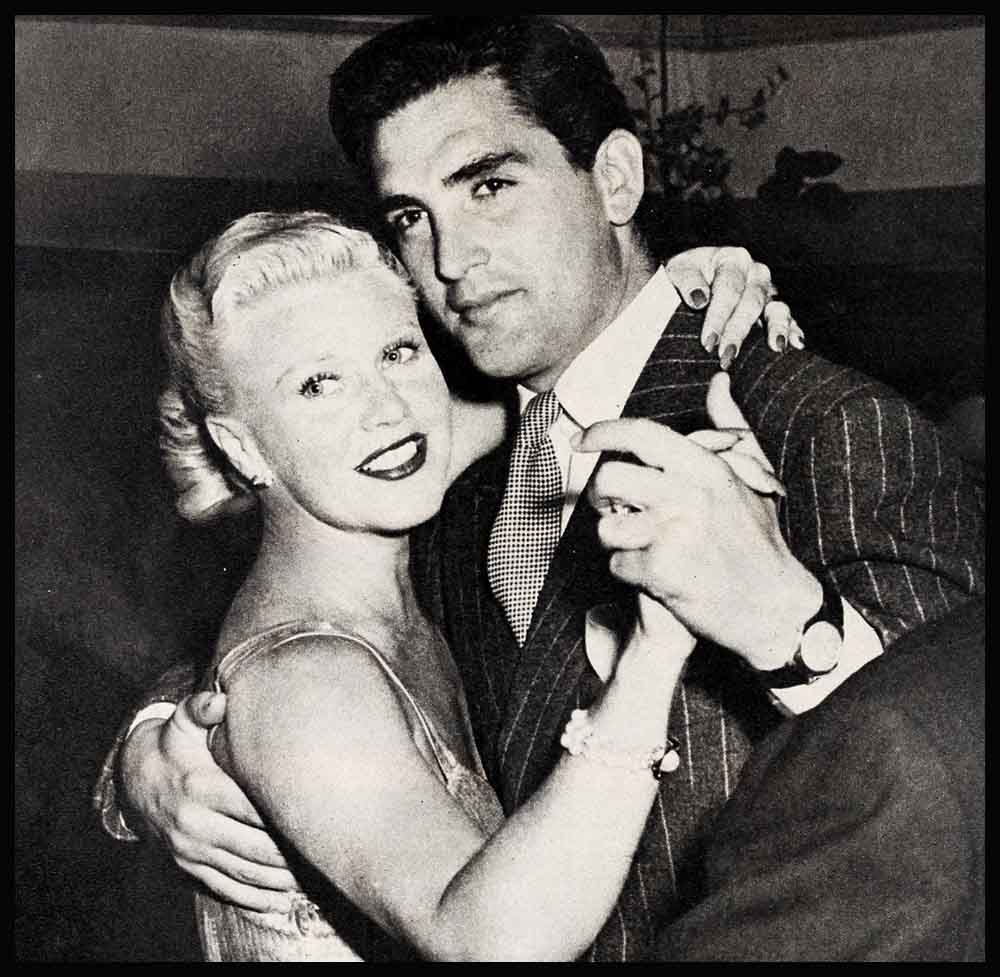 They met in Paris at Maxim’s, they romanced in Europe and Hollywood, they were married in a surprise wedding ceremony at Palm Springs in the culmination of the international romance of the year! Naturally enough, despite the quiet ceremony uniting Ginger Rogers and Jacques Bergerac, it was a wedding which sent all the writers of Hollywood hurrying off to their typewriters.

For there are other aspects to the wedding which pique the interest: it is Ginger’s fourth wedding and it is the first for her husband; Ginger is forty-one years old, and Jacques is not yet twenty-six. Will it work out or will it soon go the way of so many Hollywood marriages? Opinions, with the reasons to back them up, are about evenly divided.

It was late last summer, just after she had finished work on “Monkey Business” and “We’re Not Married,” that Ginger took off on her European vacation, her first visit to France and Italy. In Paris, in the famed Maxim’s restaurant and night spot, Ginger met Jacques—who was, incidentally, the escort of another Hollywood actress, Evelyn Keyes, that evening.

Like all Americans vacationing in Paris for the first time, Ginger had herself a ball—and if she was seen several times in the company of the handsome Jacques, no one gave the matter more than a passing thought. But when Ginger went on to Italy and Jacques followed her there, tongues began to wag. Then it was noted that Ginger and her friends were trying to persuade Jacques that he would do well to come to Hollywood for a try at American movies. (Although he had had a year’s practice as a lawyer, Jacques had previously been in some amateur plays and had studied dramatics in school.)

Ginger returned to Hollywood, and not long afterward, Jacques was in the movie capital, under contract to M-G-M. His photographic tests were excellent and he is perfecting his English for his talkie tests, which are still some months away.

At various times Ginger was seen with Jacques in quiet evening get togethers, and those who saw them began to think, even the scoffers, that perhaps the romance was for real and not for publicity.

Nevertheless, the wedding of Ginger and Jacques, on Saturday, February 7, came as a surprise to all Hollywood. The date was the “anniversary” of their first meeting six months before. Attendants at the wedding were Mr. and Mrs. Bennett Cerf and Mr. and Mrs. Don Haggerty. Ginger wore a taffeta ensemble she described as “cafe au lait” in color, while the groom—now known as “Jacky”—wore a gray business suit. After the ceremony, Ginger said that she was naturally thrilled, adding that a real honeymoon would have to wait about six months because they both had movie commitments. Jack said, in English “which I’m still learning,” that he hopes then to take Ginger to France to meet his parents.

Of interest to her Hollywood acquaintances is the fact that three of Ginger’s four husbands have been named Jack—Jack Culpepper, Jack Briggs and now Jacques Bergerac. The only noncomformist of the quartet is Lew Ayres, Ginger’s second husband.

But of greater interest to Hollywood’s movie colony is the May-December aspect of the wedding. There have been many marriages in the movie colony wherein the bride was a few years older than the groom. Examples that come to mind at once are the weddings of Mary Pickford and Buddy Rogers, Norma Shearer and Marty Arrouge, Greer Garson and Richard Ney, to name only a few. There is, too, the example of Ginger’s previous marriage to Jack Briggs, some years her junior. Of course this marriage ended in the divorce courts, as have some of the others in the May-December classification; but for every such marriage which has failed, there is one which has proved happy and lasting.

Marriage counselors and psychiatrists say that in determining the potential success of a marriage it is the emotional age of both bride and groom which is far more important than the chronological age.

Some experts hold that European men mature more rapidly than Americans and that, therefore, Jacky is much nearer Ginger’s age than his actual years would indicate. Others point out that if Jacky had followed the usual practice of his countrymen, he would have married a girl somewhat younger than himself.

Still others maintain that with an actress the case is very special anyhow, for actresses are usually far younger in appearance and manner than most women of their years. And no one can deny that Ginger has always been able to hold her own in physical appearance when compared to girls many years her junior. It wasn’t too many years ago, for instance, that Ginger masqueraded—and most successfully—as a teenager in “The Major and the Minor.” It is an ironic fact, however, that in her most recent picture, “Forever Female,” Ginger was playing the role of an aging actress at the very same time she was being romanced by the youthful Jacky.

At any rate, even while all Hollywood is speculating as to the eventual outcome of Ginger’s marriage to Jacky, everyone in the movie colony is wishing her well. Ever honest and straightforward, she has always been popular with her co-workers in the movie business. Her honesty itself may be one of the saving factors in her new marriage, for informed marriage counselors state that in weddings in which there is a gap in years between the bride and groom there should never be any lying about the age of either the husband or wife. And Ginger has never tried to pretend that she and Jacky are near the same age.

Hollywood being Hollywood, the career problems of both Ginger and Jacky will undoubtedly have a great effect on the marriage. Whether or not Jacky will succeed in his newly chosen career as a motion picture actor is still problematical. He is just now learning the fundamentals of English—with the loving help of his bride!

As for Ginger’s career, it is in full swing again, after a period of inactivity a few years back. Recognized as an able dramatic actress, an Academy Award winner, she is as much at home in musicals and in comedy as she is in a Kitty Foyle role. Certainly her career problems do not hold the question mark facing Jacky, as yet untried on the screen.

Probably no one has given more thought to these problems—the difference in age, the difference in nationality, the difference in their careers—than have Ginger and Jacky. For Ginger is a practical girl, much too practical not to have faced these problems before dashing off to Palm Springs to marry her handsome Frenchman. Certainly everyone in Hollywood admires Ginger’s courage in reaching out for romance—even those who have grave doubts as to the lasting success of the marriage. And certainly, too, everyone wishes her the best in this marriage which must remain a question-mark for months to come.