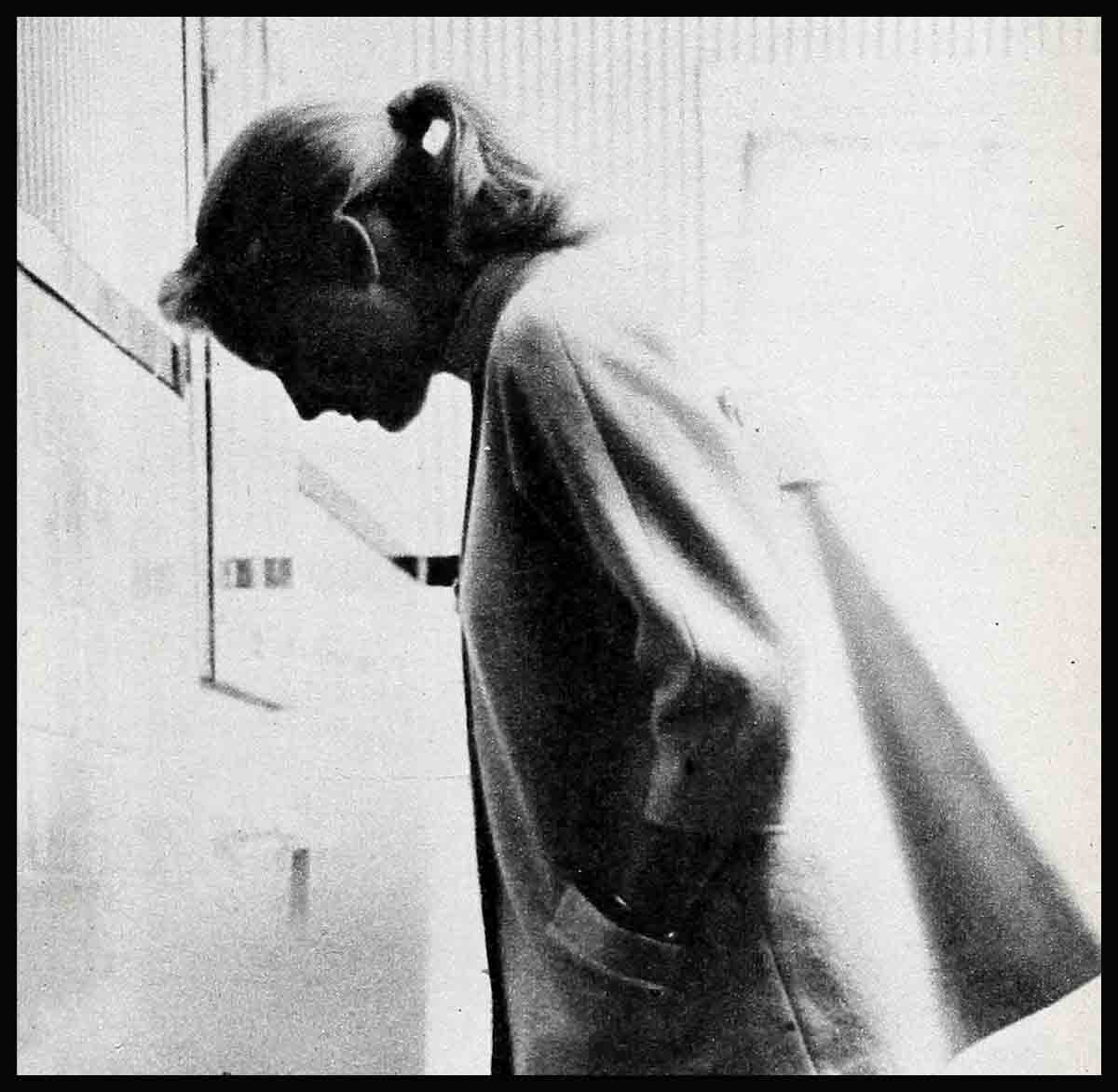 Several months ago, Vera Miles, mother of two and more than somewhat pregnant, instructed her agent to find her a picture that started two weeks after September 22nd—expected delivery date for her third baby!

“Why not?” asks Vera, blonde, delicately beautiful and glowing with energy. “One of the nicest things about being pregnant is that it can do as much for your good looks as a well-supervised nine-month beauty program. Even if you don’t have a perfect figure to start with, you can wind up with one after the birth of your baby.”

Modern obstetricians confirm Vera’s experience. The routine they prescribe to assure healthy pregnancy for both mother and baby is not unlike the health and beauty program regularly followed by actresses and models who must always look their best.

In Vera’s opinion, too many expectant mothers are depressed by secret fears about what childbearing will do to their health and good looks. “Don’t feel guilty and don’t worry!” she says. “And don’t hesitate to tell your doctor how important it is to you to look and feel attractive. He’ll understand and approve.” Wife of actor “Pete” Gordon Scott, Vera is the mother of two daughters by a previous marriage—Debbie, age seven, and Kelley, four and a half years old—in addition to the latest arrival.

“There are good medical reasons,” she says, “why obstetricians today are as concerned about weight as beauty experts. They’ve discovered that toxemia of pregnancy, one of the commonest dangers to expectant mothers, rarely occurs unless the patient is overweight.

“If you are too heavy to start with, your doctor will put you on a diet to normalize your weight. Even if your size is right, he probably won’t permit you to gain more than eighteen pounds. It’s usually alloted this way: three pounds for the first three months and two and a half pounds for each succeeding month. While your doctor is watching your weight to safeguard your health,” Vera points out, “you can make it pay off in a better figure.”

Five feet four and a half inches tall and normally weighing around 112 pounds, Vera had to diet to keep weight on. “I gained only twelve pounds carrying Debbie,” she says, “and after she was born I looked like a rail! Next two times, I made sure to gain the full eighteen pounds.

“Eating for two doesn’t mean twice as much,” warns Vera, whose diet has two objectives—controlling weight and getting the right food. “Babies know what they need for healthy development. If your diet is inadequate, they take what they need at your expense. And that’s when a woman’s health and appearance can be permanently damaged!”

To protect both you and your baby, Vera recommends that your diet include daily portions of eggs, meat or fish, whole grain bread or cereal and three portions each of fruit and vegetables. “Your doctor may also prescribe supplementary vitamin pills,” she adds, “and suggest that you cut out sweets because they tend to destroy your appetite for the foods you need.

“Milk, of course, is a big must, but because of its high fat content, your doctor will decide how much is best for you. If you are a rapid gainer, he may prefer to have you drink skim milk.

“If following your diet grows irksome,” says Vera, “remind yourself that it means better health for your baby now and better looks for you a year from now.”

Meals for the Scotts, whether or not Vera is pregnant, usually include meat, broiled or roasted, a vegetable and a big green salad. For dessert they like plain gelatine made with orange juice or a liquidized fruit. Breakfast is often prepared in a liquidizer and is usually a combination of orange juice, two raw eggs, a little honey, a couple of envelopes of gelatine and a banana. “Tastes delicious,” says Vera, “and I get plenty of nourishment without feeling overstuffed.

“If it hadn’t been for Pete,” she confides, “I’d never have found out about proper nutrition. He’s a firm believer in natural foods and he certainly changed my way of thinking—and eating. I went along first just to please him. But after eating his way for a while, I suddenly began to notice how much better I looked and felt. Even skin blemishes that used to bother me occasionally have disappeared!” Vera now knows enough about diet to write an article on the subject—and has, in a local newspaper. She admits that her doctor was impressed enough to buy a batch for his other patients.

“Don’t be surprised,” Vera cautions, “if you find yourself nodding at any and all hours. It’s one of the major signals of pregnancy and nature’s way of telling you that you need lots of rest. Eight hours of sleep at night are always important for good health and good looks—as anyone who has to face a camera knows. But because of the extra work your body is doing during pregnancy, it needs to be recharged often. Three twenty-minute rest periods during the day do more to pep me up than two additional hours of sleep at night.”

Like the right groceries and enough rest, exercise is another item the expectant mother can borrow from an actress’ normal beauty routine. “Walking in the fresh air is one of the best exercises for pregnant women,” says Vera. “It pays a beauty bonus, too, in fresher skin, sparkling eyes and improved muscle tone. I also swam a lot in our pool and got plenty of exercise painting and hanging wall paper. But don’t overdo,” she warns. “As a precaution against miscarriage, your doctor will remind you to take it easy on days when you would normally have your menstrual period—especially during the first three months.”

An old wives’ tale that Vera does heed is the one about “a tooth for every child.” “Calcium metabolism is affected during pregnancy,” she says, “and extra acid in the mother’s saliva may also weaken the enamel. It’s a good idea to have beginning cavities filled early in your pregnancy. And see your dentist once again before the baby is born so that no new cavities can make much headway.”

A slave, she admits it, to a toothbrush, Vera even carries one in her handbag because she’s always had trouble keeping her teeth free of cavities. Even when she’s not pregnant, she scrubs her teeth after each meal, as well as morning and night, and has taught her daughters to do the same.

About the stretch marks that sometimes appear on abdomen, hips and breasts as the body enlarges, Vera has experienced no problem. “Dry skin may be a factor,” she cautions, “and during pregnancy it’s likely to become even drier.” She uses bath oil to keep her skin supple and enjoys a long, leisurely soak in a lukewarm tub, as much, she says, as some people enjoy eating!

“I rarely take a shower because a bath fulfills two needs—it gets my neck clean and relaxes me. I take a magazine with me and can happily spend thirty minutes to an hour in the tub, depending on how busy I am.”

Vera has decided ideas about how to look pretty while pregnant. “You can’t be much more feminine than when you are having a baby,” she says, “so why not look the part. Even if you’ve always been the glamorous type, this is not the time for dramatic effects with heavy make-up or complicated hair styles. I don’t mean you should go to extremes and let your nose get shiny,” she adds, “but I do like makeup applied for a natural look and a hairdo that is simple, shining and easy to care for.

“Sometimes pregnancy tends to make hair stringy, lose its luster or even fall out a bit. Brushing helps and so do conditioning treatments.” Vera finds that her hair grows faster when pregnant. “For which I’m grateful,” she says, “because Pete likes it long.

“Women who have trouble with brittle, breaking nails during pregnancy can usually strengthen them by eating plain gelatine dissolved in fruit juice or some other liquid,” she advises. “I don’t have this problem, probably because my normal diet is high in protein.”

Vera’s maternity wardrobe features slim skirts and trousers with tops that stand away crisply. “Soft, clinging fabrics look tired,” she says, “and make you look bulgy.” About shoes, she admits that the added weight can be hard on your feet, but prefers flats and occasionally high heels to “sensible” shoes. “I suppose if you’re really smart,” she says, “by the sixth month you’d give in and get a pair of oxfords.”

Vera thinks that too much leisure is what makes nine months seem like nine years to some women. “The minute I get pregnant I get very ambitious,” she says. “I work as long as I can in pictures. Then, when I’m no longer in shape, I do all the things I ordinarily don’t have time for. Last summer, while I was carrying the baby, I papered and painted three rooms, and made curtains, draperies and the girls’ fall school clothes. I also got a lot of reading done,” says Vera who thinks that pregnancy is a good time to provide for the mind as well as the body.

In Vera’s opinion, it’s a mistake to fear for your figure if you want to nurse your baby. “If anything, your breasts will be a little fuller,” she says, “and that’s usually all to the good. If I didn’t nurse my babies, it wouldn’t seem like I had any.”

To prevent sagging, she urges being extra sure of proper support during both pregnancy and nursing. “By the third month,” she says, “it’s time to call it quits with your regular bra and switch to a maternity model that will expand as you do and fit through your entire pregnancy.”

Vera cautions against doing post-natal exercises until your doctor gives you the go-ahead. “He’ll probably suggest that you start on the tenth day after birth,” she says, “and continue for two or three months. The routines he’ll recommend are primarily to strengthen the vaginal muscles and sphincter of the bladder and help the uterus return to normal position. But they will also strengthen abdominal muscles, and help to smooth any bulges on hips and thighs.

“Nerves play a big role in how you look and feel,” says Vera. “You can let being pregnant scare you to death or you can enjoy it as a wonderful adventure. Having a baby is a family affair in our house and the girls shared the entire experience with me. Telling them about the baby was no problem. They’d been begging for one for so long that it was really a matter of saying, ‘Now you’re going to have it—but you’ll have to be patient for a few months.’

“I haven’t kept anything from them and Debbie has known the facts of life for quite a while. I feel that anything she’s ready to ask about, she’s ready to know. We got a little book from our doctor that shows how a baby is conceived, how he lies and how he looks at different stages and we all went through it together.

“I think a little girl’s best preparation for life is to be around her mother when she’s carrying a baby. If she sees what a natural, happy experience it is, she’ll be able to discount later the frightening old wives’ tales she may hear. She’ll see that the right food, enough rest, fresh air, exercise, normal activity and good grooming can make pregnancy the most attractive time of a woman’s life. And I hope she’ll learn that it can be carried over from a nine-month project to a long range program for good health and good looks.”