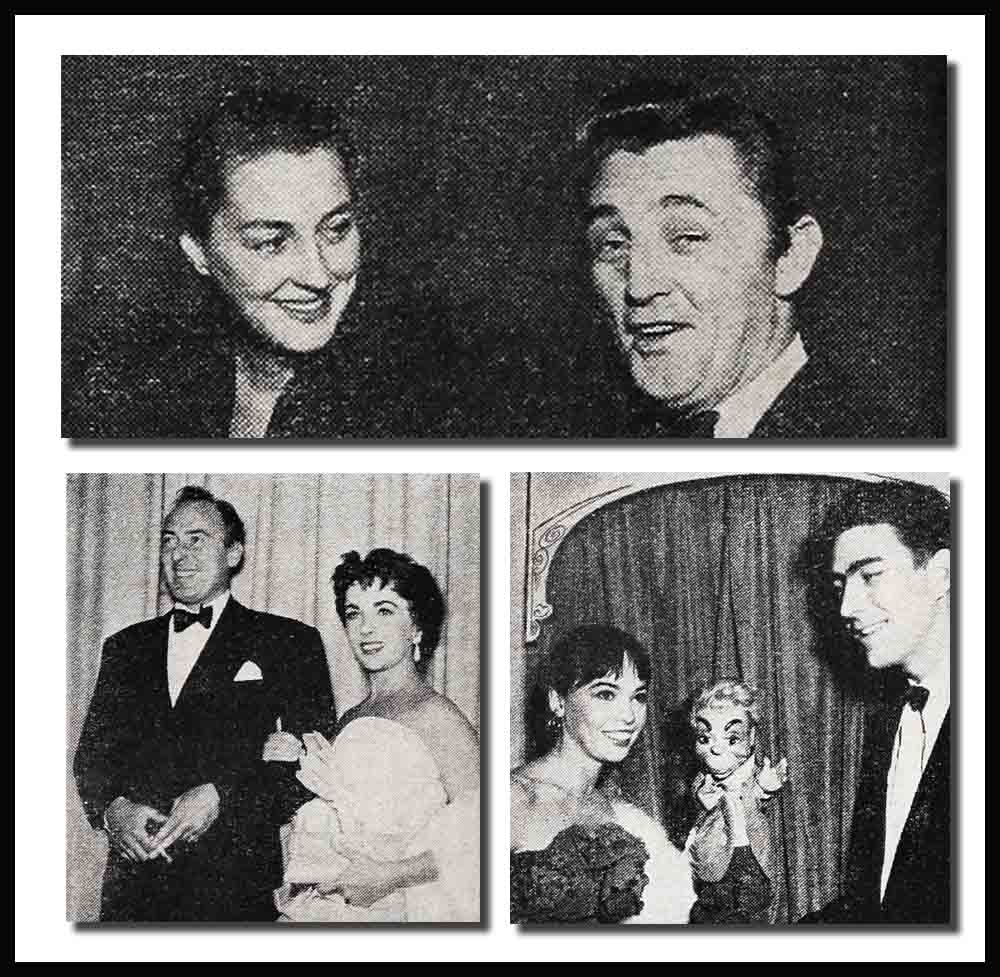 A REAL GALA EVENT was the preem of “Lili.” Besides bringing forth a lot of famous faces, it was one that must always remain a bright spot in Leslie Caron’s memory. That night, Leslie found out that she had become a star! Along with all the giant searchlight stuff, radio broadcasts in the lobby, etc., Leslie played “hostess” to such as Greer Garson, Katie Grayson, Howard Keel, Elizabeth Taylor, a walking dream in strapless, floor-length white organdy, the skirt tiers and tiers of crisp stuff; the Bill Holdens, Bobby Van, and Elaine Stewart.

Beautiful Elaine is getting around these days, and doing the unexpected. Recently she went on location with the company filming “Take the High Ground.” She was the only girl with the troupe and there was an Army camp nearby. So, the Stewart Miss put on a one-girl fashion parade for the boys one afternoon, modeling everything from bathing suits to suits!

And it’s about time I got around to a few fashion notes! One of the most delightful aspects of Hollywood is the outdoor living that most film stars who live in houses rather than apartments, avail themselves of. With or without swimming pools, the glamour pusses usually have a good-sized “plot of ground.” And they dress up—or rather just dress for the outside as much as they do for indoor entertaining.

Judy Garland loves to loll around in a peony-red linen with a strapless bodice and flaring skirt, with matching red linen sandals. When it gets cool, a little matching bolero keeps the shivers from the shoulders. Blonde Eleanor Parker and her husband like to give outdoor buffet suppers in their patio and in the garden, seating guests at individual tables for four. Tables are usually decorated with blooms from their own garden. And the Parker pale beauty on such occasions is usually set off with her favorite black linen dresses, trimmed with bright flowers in yarn embroidery. In the summertime, even a tiny backyard will do for outdoor entertaining—in the movie-star manner. All it takes is imagination in fixing up a table or two.

Speaking of decorations, I honestly can’t remember a more lavish or lovely dinner-dance ever given in this town, than the one tossed by Jane Greer and Ed Lasker in the “Crown Room” at Romanoffs. There were about 200 guests—the girl half, gorgeously gowned—and all gasping at the fabulous flowers and ingenious decor. The big room, so familiar to all, was hardly recognizable. In the “Bon Voyage” scheme, small flags of all nations hung from the ceilings; each table featured flowers set amid landscapes, like miniature stage settings, each of a different land! Having fun till four ayem and dancing to Freddie Karger’s music, were Joan Caulfield and Frank Ross, the Dore Scharys, Joan Fontaine, Rocky Cooper with Rock Hudson, Audrey Totter and Leo Fred, Gloria Grahame, Dorothy McGuire, the Bob Mitchums, Peter Lawford—to name a few!

The “Bon Voyage” party reminds me that Hollywood fashion designers have a special name for the many actresses who are spending so much time traveling these days —whether for pleasure or picture making. They call them “The Suit-Case Trade.” We all know that nylon above all things, packs uncrushably like a dream. But there are pullenty of styles for vacation travel that take up little room and don’t “wilt” when you unpack ’em. Among these are knitted dresses, suits, skirts—even gowns. They can be made with anything from light yarn to “silver threads among the gold” or gleaming narrow silk ribbons.

Odds and Ends: Jeanne Crain, the longest holder-outer in the matter of cutting long tresses, finally sheared ’em to the shortest poodle in town! . . . Janet Leigh, who always wears huge, bouffant-skirted evening gowns, hangs on to them for dear life. She says, “Almost every time I dance, I lose at least one petticoat!” . . . Hedy Lamarr, who’s been doing so for years, still strolls Beverly Hills clad in what seems to be her “uniform”—peasant skirt, peasant blouse, moccasins and a scarf over her head!