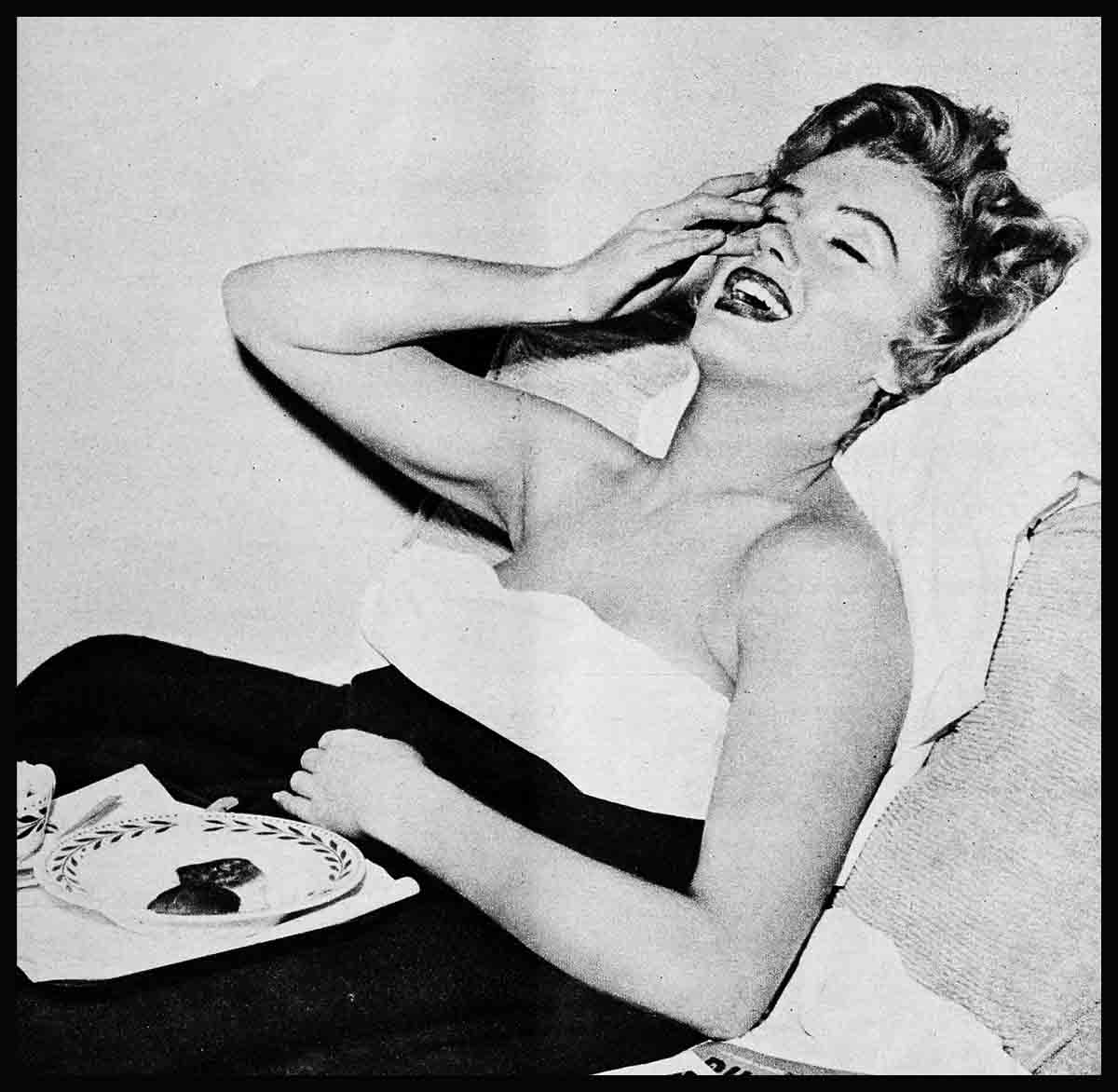 Temptations Of A Bachelor Girl—Marilyn Monroe

I like the life of a bachelor girl—including its temptations. It’s a lot better life than the one I used to have. I can remember when I was practically a nonentity. What else is a girl who doesn’t know much about her background?

Everyone used to tell me what to do and how to do it, with me afraid of myself, always trying to please someone else.

So I find it pleasant now to come and go as I wish, to do what I want to do when I want to do it. However, I wouldn’t say the life of a bachelor girl is all roses. There is, for one thing, the matter of loneliness. . . .

Loneliness offers temptations. Girls who live alone can become so tired waiting for someone to ask them out that they look anywhere for excitement, accept almost any kind of date, go on any kind of party—just to go. They come to settle for too little, to take the easy road instead of growing more mature and becoming stronger. To settle for too little can lead to a wrong marriage, to promiscuousness, to self-deceit. I’ve managed to avoid this danger because my work and other interests keep me mentally and physically occupied. Recently, my days have begun at six in the morning. It’s been seven when I got home to have dinner, study my lines and then work on my school lessons. I’m not supposed to be the type, I know, but I’ve been taking a literature course at UCLA. I’ve gained much from it.

Dates, too, are a problem for the bachelor girl—if she allows them to be. But not long ago when I could think of no one I knew well enough to ask to take me to a party, I went alone. And had a wonderful time.

Another night, dateless, I was pretty depressed. I called a couple of friends to ask them over, but they were busy. I tried listening to records, but wasn’t in the mood. Finally, I got in my car and drove down to the beach. I got over the bleak mood, but I felt like every other bachelor girl—it would have been so nice to have someone to come home to.

A few men may have rather strange ideas about a bachelor girl’s character, feel that because she lives alone she must be a little careless of her reputation. A girl can give this impression, or she can make her moral principles quite clear.

I once heard a bachelor girl say, “You know, it’s so difficult living alone. You have to be twice as careful in what you do and say so as not to give people—men especially—the wrong impression.

I didn’t waste much time in disagreeing with this character, in telling her, “I see no reason for worrying about what other people think or say about me as long as I can face myself. I owe no apologies to anyone and have no intention of going around making explanations.”

Some bachelor girls, of course, act as if they were carrying a sign reading, “The pure of heart.” There’s no point in this attitude either. If you’re going to be on a tightrope when you go out for fear you’ll ay or do something that will give the wrong impression, you’re better off at home. Some girls, of course, adopt the pure in heart attitude after spending most of the evening leading a man on. Then, when he reacts accordingly, they’re oh! so shocked!

A man will take a cue from a girl every time—whether she’s a bachelor girl or not.

On dates, there may be the problem of letting a man know that the evening stops at your front door. However, when a man puts his foot inside your front door and wants to come in, just thank him for a nice evening and—close the door!

I have confidence in men—and their more noble, as well as their baser, instincts. A man wants approval. He won’t force his attentions on you if you make it clear that said attentions are unwelcome.

If he doesn’t go for the quiet explanation of “keep out,” if he argues, gets belligerent, can’t understand why he can’t come in for “a few minutes,” then I lose all interest in protecting his manly feelings. If he asks for a door to be closed in his face—he deserves it.

Some people, I know, disapprove of a bachelor girl entertaining a man at home. I entertain men at home—usually for dinner or for an evening of record-playing. I don’t leave my door open and I don’t have to know a man for two years before I invite him to my apartment. Neither do I say, “Come on up” to someone I’ve just met.

Before I think seriously of marriage, the goal of most bachelor girls, there are, I know, things about myself I’ll have to change.

First I’ll have to do an about-face on my would-be present independence and start establishing some roots. This, I think, will not be difficult since I adapt easily. There’s also my personal carelessness. I come home from the studio, kick off my shoes and leave them where they fall. I may pick them up later and I may not. I go into the kitchen, fix a hurried meal, and sit on the floor by the fire and listen to records as I eat. When it’s time to go to bed, I’m apt to drop my clothes wherever I am.

This might not do if I were married. With a husband.as careless as I am we’d have quite a place. But carelessness is a habit we bachelor girls get into.

I’ll also have to learn to share more before I quit my bachelor girl estate. I’m used to making my own decisions and taking care of my own problems. I’d have to be on guard not to be quite as efficient around my husband. I doubt that any man appreciates a wife who wants to pay all the bills, carve the roast and mix the cocktails.

There’s also the matter of being on time. Because there’s no one around me to keep me posted on my appointments, I often forget to arrive on time. This I understand is something which no husband appreciates.

I don’t plan, however, to put these changes into effect just yet. I’m going to stay a bachelor girl for a while. It’s a wonderful life—in spite of all the temptations.