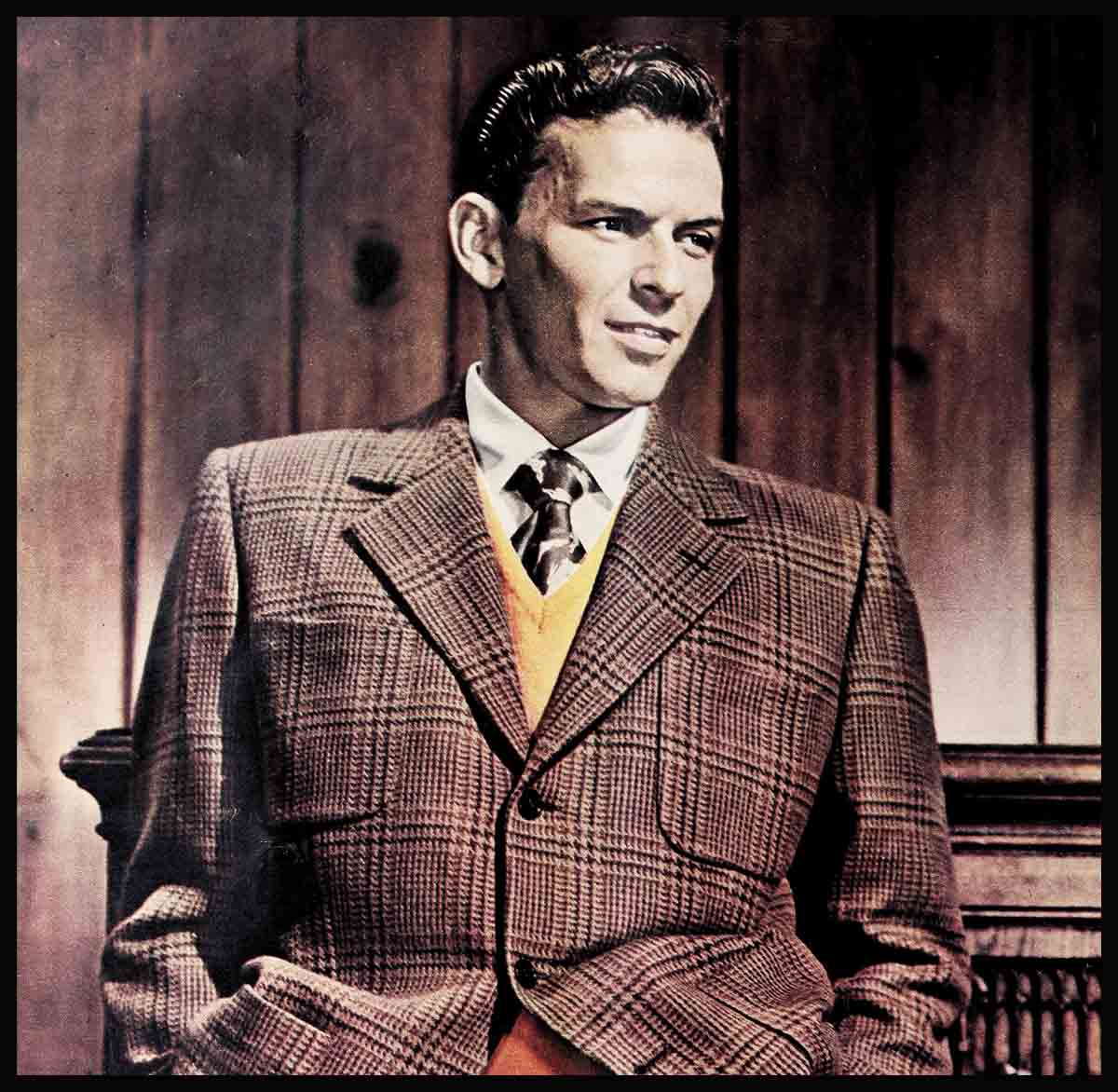 I Want To Talk To You—About Boy Meets Girl

Sometimes talking to all of you, I get to worrying I’ll sound like a Sunday-school teacher. But that’s just the point. I’m not. It isn’t so long ago that I was standing just where you kids are standing now. That’s the reason I can come pretty close to figuring all the wrong things you’re likely to do and all the right things you easily might skip doing. It’s also the reason why I know that some of the errors you may be chalking up against yourself right now can cost you plenty later on.

It’s no cinch to stay on the beam all the time. I know that. Something’s always coming along to throw you. Often enough it’s a boy or a girl. Or worse—a boy or a girl comes along but keeps right on going. That’s really a tough one to take.

I was lucky enough to meet Nancy when I was in high. In her swell friendly kind of a way she’s always helped me to keep my balance; like she does today when she comers me in the morning before I leave home and says, “I’m cooking dinner tonight, Frank. Making your special spaghetti. Be here by six!”

It works every time. And I realize I’ve been getting mixed up in a lot of things and been dashing in for dinner around eight or nine o’clock or telephoning that I’m tied up with the gang and will grab a bite on the rim.

Even when we were kids down at Ocean Grove, where Nancy’s family lived in the summer and where I visited an aunt, she was like that. The first time I saw her she was sitting on her porch steps manicuring her nails. When I whistled she slapped me down hard by ignoring me completely.

Later, when Nancy and I got to know each other, I’d leave the crowd I’d been clowning around with on the beach all day and walk down to where she’d be sitting. She never got down to the beach until the latter part of the afternoon, you see. She always had to help around the house. I used to pester her to leave her work and come down earlier. But she never did. She always smiled, the same quiet way she does today, and said, “I’ll see you later.”

I never mooned around waiting for her. I’ll admit. I was quite a guy in those days, in my own books. Used to play the uke while some girls we fellows thought were hot numbers obliged with Hawaiian dances. Nothing wrong with that, of course—unless you think it’s wrong while you’re doing it or make it wrong hy a lot of exaggerated motions.

Nancy never criticized any of my gang by word or look. Nevertheless she never joined us. I had to join her. She’s always had courage that way—courage to do what she thought was right and what she enjoyed, no matter what anybody else was doing or what or where they were getting doing it. Nancy never went with the crowd unless it was going her way.

This made Nancy smart, of course. Because the sooner we learn to be true to ourselves the better life’s going to be. It isn’t easy to do this. But remember, every time you go against your own nature—whatever this may get you for the time being—you’re making it harder to get back on your individual beam. And that’s the only way anyone can be happy.

One thing you can count on. Kids: Listening to the other fellow and doing as he’s doing never will get you anywhere. Also, no matter what the other fellow is doing or what it’s getting him, if you feel it isn’t for you, skip it. You all know deep down inside of you whether or not a thing is for you. And the faster you learn to be guided by the signals that flash to you from that control room lying inside of you the more grief you will miss.

To show you what I mean, I see a lot of girls on the street and waiting at stage doors who wear much too much make-up. Their hair is so red or so gold that you need sun glasses to take a good look without squinting. Their sweaters hug them tighter than a sausage skin or else make an average sloppy Joe look like a real good fit. When I see girls like this I go around I talking to myself, telling myself to mind my own business, that they’re not my kids. Because, you see, I always feel if somebody could only help these girls get back on the right track before it’s too late they’d have a fair chance for the only kind of a life that ever means happiness to girls as sweet and good as they are underneath.

I have no objections to make-up. I feel that make-up used wisely and intelligently to bring out your good features definitely enhances your appearance. It loses its value, however, when you slap it on indiscriminately. The Indians used to do that and they weren’t anything you would want to go out with on a Saturday date.

After all, in your use of lipstick, for instance . . . Remember, if it was meant just to be smeared on in order to cover your lips manufacturers wouldn’t spend fortunes developing thousands of shades so they could hit the right one for you.

I always figure I can tell about the girls who overdo the business of make-up and acting sophisticated. They’re not popular with the boys and they’re copying the girls they think boys go for. Or else they’re so popular that it’s gone to their heads.

I can hear you saying, “Frankie, quit preaching!” I don’t mean to preach. Kids, I just remember how it was in Jersey where I grew up. And life’s pretty much the same, I’ve found out, wherever you live.

Sure, boys will go out with the girls they call “babes.” But when most men marry they look for girls who will be good wives and mothers. Maybe I’m old fashioned. That would be a laugh. Back in my Jersey days I used to spend a lot of time trying to knock down all the old-fashioned ideas. Don’t ask me how I figured I knew more than older people who had been around more than twice as long and seen more than twice as much. But then I guess the kid who doesn’t think he knows more than his parents just isn’t normal.

I tell you all this so you’ll know the way I feel about the mistakes your letters tell me you’re going to make if you don’t watch your step. . . .

“To begin with, I am fifteen years of age. My parents are strict. They say they are doing it for my good—that although I don’t realize it now, I will later.

“I have often been asked for dates with boys a couple of years older than I am. So far I have refused them. My favorite friend is a year older than I am. Her parents don’t care what she does or how she does it. This friend is trying to get me to go out with boys behind my parents’ back. She preaches to me my parents would not know a thing about it. But so far I have refused because I have learned in all my eleven years of school that honesty is the best policy.

“What do you think, Frankie?”

“I’m fifteen years old and a sophomore in high. I have light brown hair and gray-green eyes. I’m five feet, one and a half inches tall—just a squirt.

“My Mother is leery of me going out with boys, even boys my own age. She wants to know who I am going out with and to be sure and get home right after the show. Usually we go some place and park. Oh sure, that sounds bad. But all we do, Frankie, is talk about people we know, school, studies, shows and then have a goodnight kiss. Really is there anything wrong with that?

“We are only having fun. And we like to pretend we are really in love and so forth. Still we aren’t as dumb as most of the grown-ups think. You can ask most any young couple what they think their love is and they will say puppy love. But puppy love is very sweet and a lot of fun. Frankie, think back to when you were my age and I’m sure you will understand. Please tell me if I’m so very wrong in my attitude.”

I guess being impatient is part of being young. Just the same, it’s a mistake to rush life. Just remember that no matter how old you look, fifteen is too young to go out with older men or to be serious about any boy.

A girl who keeps her sweetness and who doesn’t go oft the deep end can be the biggest help in the world to the right man. I know that I owe a lot of the things I have done to Nancy’s good orderly mind and to the stabilizing influence she always has been in my life.

I was pretty wild and impatient back in the old days. And I sometimes wonder if I’d have gotten by so well if it hadn’t been for the talks Nancy and I used to have sitting on the brownstone steps of her family’s home in Jersey City. She never tried to keep up with me. She just tried gently to pull me back to an even keel. She would show me how I wasn’t going about my ambition to be a singer in the right way, how it wasn’t fancy but dumb to stay out late at night, how you couldn’t let bad breaks start you being rebellious or feeling sorry for yourself.

It also was Nancy who backed me up every inch of the way in my dream of being a singer. She even staked me to bus fare and pocket money when she was working and I wasn’t and she even kept her job after we were married because my job as a singer in a local night club wasn’t too profitable or secure. You see, she had faith in me.

So I say, take it easy, Kids. You may have done wrong things. But you don’t have to do them any more. Just pay strict attention to those signals you get from your own control room deep inside of you and you’ll see how easy it gets to stay on the beam and make a happy landing.

It’s been nice having this visit with you. Let’s look forward to our next chat next month.

Frank Sinatra will be back in October Photoplay for another of these heart-to- heart talks with you.