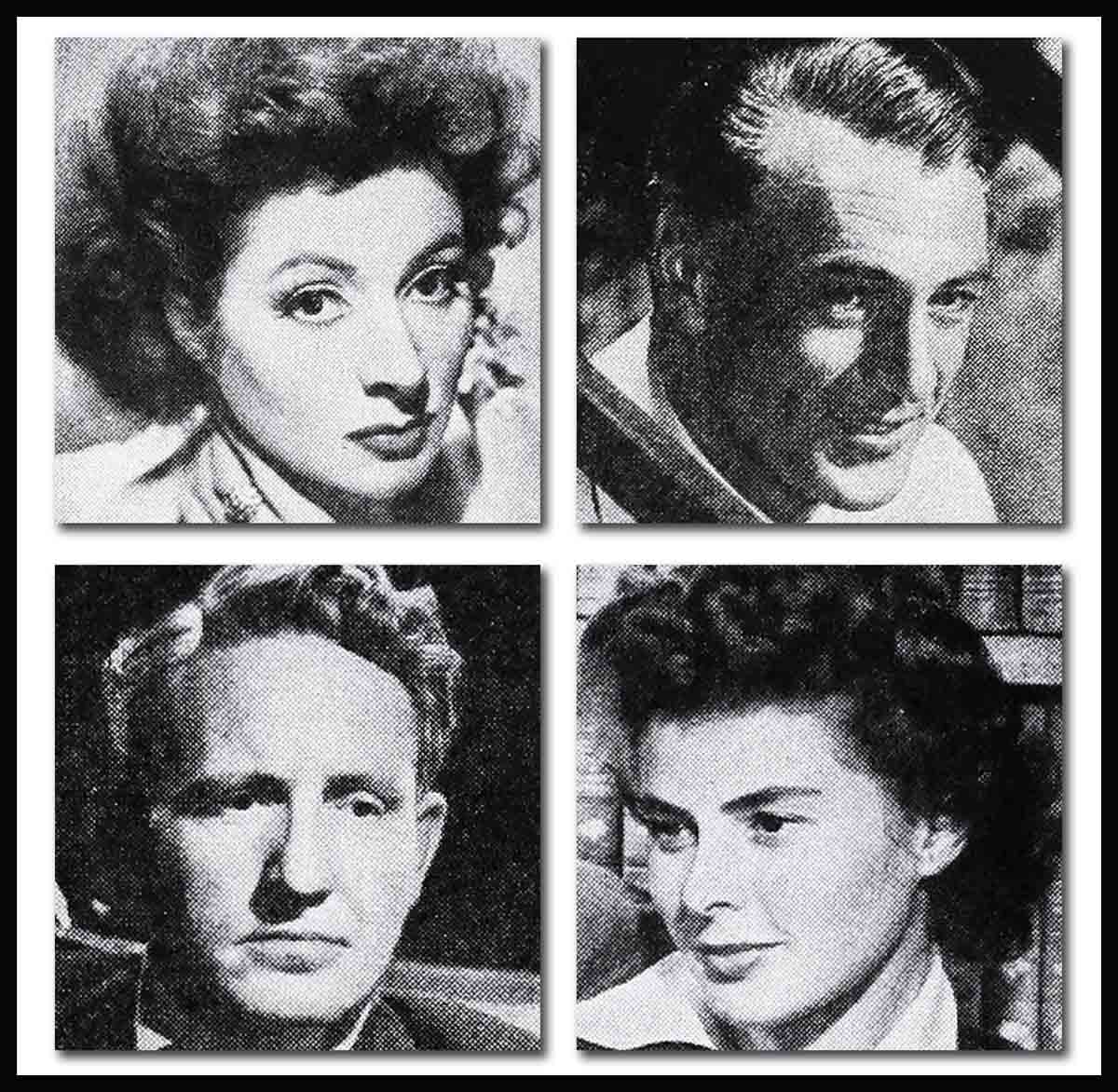 It is Saturday night in your town somewhere in the U.S.A. You have a date tonight—with your best beau, or with the girl down the block, or with your family—to do the same thing Americans all over the nation are doing: Going to the movies.

The line before the theater is a long one; the picture is “The Keys Of The Kingdom.” For two hours you sit absorbed by the powerful story of A. J. Cronin’s novel; you are moved by Gregory Peck’s fine portrayal of Father Chisholm; and when you walk out of that theater you pronounce the film a great motion picture. As a Photoplay reader you are ready perhaps to go on record as saying, “That movie should win Photoplay’s Gold Medal Award for 1945.”

Whether it will or not is right now being determined by a poll which we feel is one of the most scientific and accurate on the American scene. This very minute your counterpart—be he or she doctor, typist, nurse, businessman, schoolgirl—is talking to a pleasant-looking man or woman who has just approached him with, “I’m from Audience Research. Mind answering a few questions?” The result of those answers, added to the thousands of answers from all over the nation—in big cities, small towns, on farms and in factories—will decide what picture and what stars will receive the Photoplay Gold Medal Award for 1945.

This Award is given each year to the best-liked motion picture and the most popular actor and actress of Hollywood. The choice is made by American movie-goers themselves, polled through our Audience Research from coast to coast; and it is the one Award that is the actual expression of the wishes of movie-goers interviewed personally.

At this time, the 1945 race is halfway run. It is an exciting and close one.

Nine pictures head the list as contenders for the Gold Medal this year. They are “The Keys Of The Kingdom,” “Meet Me In St. Louis,” “Music For Millions,” “National Velvet,” “Objective Burma,” “A Song To Remember,” “Thirty Seconds Over Tokyo,” “To Have And Have Not” and “Winged Victory.” (Note that these pictures are listed in alphabetical order and are not ranked on the basis of enjoyment.)

Thus far this year movie-goers have picked these five women stars as their favorites, with others running close

Your favorite is not among them? Well, here’s a point to consider: This list is made of those pictures released in December, 1944, or during the first five months of 1945 and have already been seen by one-third of the movie audience, a requisite that we feel is essential to insure that pictures considered for the Award have had sufficient distribution to give all elements of the movie-going public a chance to see them. But there are still five more films which, although they have not as yet been seen by the one-third minimum, will likely qualify on that score by December. The vote on them is strong enough to suggest that one of them may be the winner of the Gold Medal.

They include: “The Enchanted Cottage,” “God Is My Co-Pilot,” “Thunderhead,” “Tomorrow The World” and “Wilson.”

Now let’s go on to the stars. Which ones have the best chance of winning the Gold Medal? Among the actresses (again arranged alphabetically) are Ingrid Bergman, Bette Davis, Judy Garland, Greer Garson and Betty Grable. Among the actors, Gary Cooper, Bing Crosby, Cary Grant, Bob Hope and Spencer Tracy head the list.

Here’s a revealing sidelight on this list: The four runners-up are Claudette Colbert, Ginger Rogers, Humphrey Bogart and Van Johnson. Will one of these have a chance of receiving the personal tribute of the Gold Medal from movie audiences? The answer to that depends on what all the Mary Smiths and John Does reply to the Audience Research interviewers in the next four months.

Hollywood, in producing its films, naturally wants to please the nation. Before the Audience Research poll was originated, producers had to base their decisions as to what movies to make on box-office returns and their own intuition. Today, through the poll, those same producers can have the direct answer on what pictures the audience will go to see even before the picture has been released.

“A Song To Remember,” one of the contenders for the Award, is a case in point. Before the picture was made Audience Research had found audience interest in a picture based on the life of Chopin to be below average. Columbia Studios made the picture anyway, feeling that the material was there for a fine motion picture and, guided by the early tests, put more stress on Chopin’s music and his romance with Madame Sand. The finished product was in effect a story told with music—Chopin’s music. As the next step. Audience Research previewed the picture and, using methods developed to measure audience reactions, found it to have a very high enjoyment rating. This has since been borne out in its standing as a contender for the Photoplay Award.

With this evidence of the finished picture’s strong appeal Columbia held back the release of “A Song To Remember” in order to pour time and money into publicity and promotion, change the title from ‘‘The Life Of Chopin” to the more popular one, “A Song To Remember” and release it in a super-Hollywood way all over the nation. The result: The American public saw a picture it liked and that picture became a top-of-the-lister for the Photoplay play Gold Medal Award.

Another big question-mark point was ‘‘China Sky.” The film was previewed by the exhibitors and pronounced a failure as a big money-maker. Audience Research, however, discovered that “China Sky” was far from a failure in terms of its drawing power among movie-goers and on the strength of these figures, RKO released the the film in first-run fashion. Box-office results have amply justified their doing so.

Some surprises come up, too, in the list of the leading actors and actresses. Among the men, for instance, two of the biggest money-making actors. Van Johnson and Humphrey Bogart, are mere runners-up. Perhaps by the end of the year they will head the list, but the point to remember is that to do that they must be the first choice of a true cross-section of America. Your lawyer, your schoolmate, your teacher, your mother and you all make the choice together so that, should either of these men win the coveted Medal, he would truly be the man who is chosen first by the American audience.

One big argument the figures in the poll so far seem to settle: Does America want war pictures? That argument has been going on since 1942, with one side saying strongly, “Don’t force us to look at the horrors our boys may be enduring right now;” and another claiming, “It is essential, horrors or no, that we as a nation know what war means.”

You may recall that in our list for the ten top pictures for 1944 seven dealt with war backgrounds. This year the list so far gives us five pictures of the first nine with war backgrounds, three of which are almost unalleviated by any other theme—“Objective Burma,” “Thirty Seconds Over Tokyo” and “Winged Victory”—and three out of the other five potential contenders. In voting for these the public has indicated that they can take their war straight, when it is well done. It’s the bad ones they don’t like.

‘This is true of all so-called “cycles.” It isn’t so much that the “cycle” runs out. It’s that people get tired of poor imitations.

The charge has sometimes been made that the American people, as a nation, are not music-lovers; that their appreciation of music is confined to the juke-box; that their contribution to that group of the world’s arts pales before the great compositions of other nations.

That argument falls down with one look at the list of contenders: Three of the nine, “Meet Me In St. Louis.” “Music For Millions” and “A Song To Remember,” have musical backgrounds. In addition, “A Song To Remember” presents the great classicist, Chopin, and “Music For Millions” was full of the classics with Jose Iturbi, the concert pianist, as one of its star performers.

Perhaps America has been a little too busy building its skyscrapers, its great factories that have helped to win this war; but the choice of those three motion pictures indicates that as a nation, the people have an innate love of music.

As the last months of 1945 roll off the calendar we shall all be watching with greatest interest how you, the movie-going public of America, are voting. For in your hands, and yours alone, lie the answers as to who will be the most popular stars and what will be the most popular picture of the year. When the Photoplay Gold Medal is finally awarded for 1945, it will be, in the truest sense, America speaking.