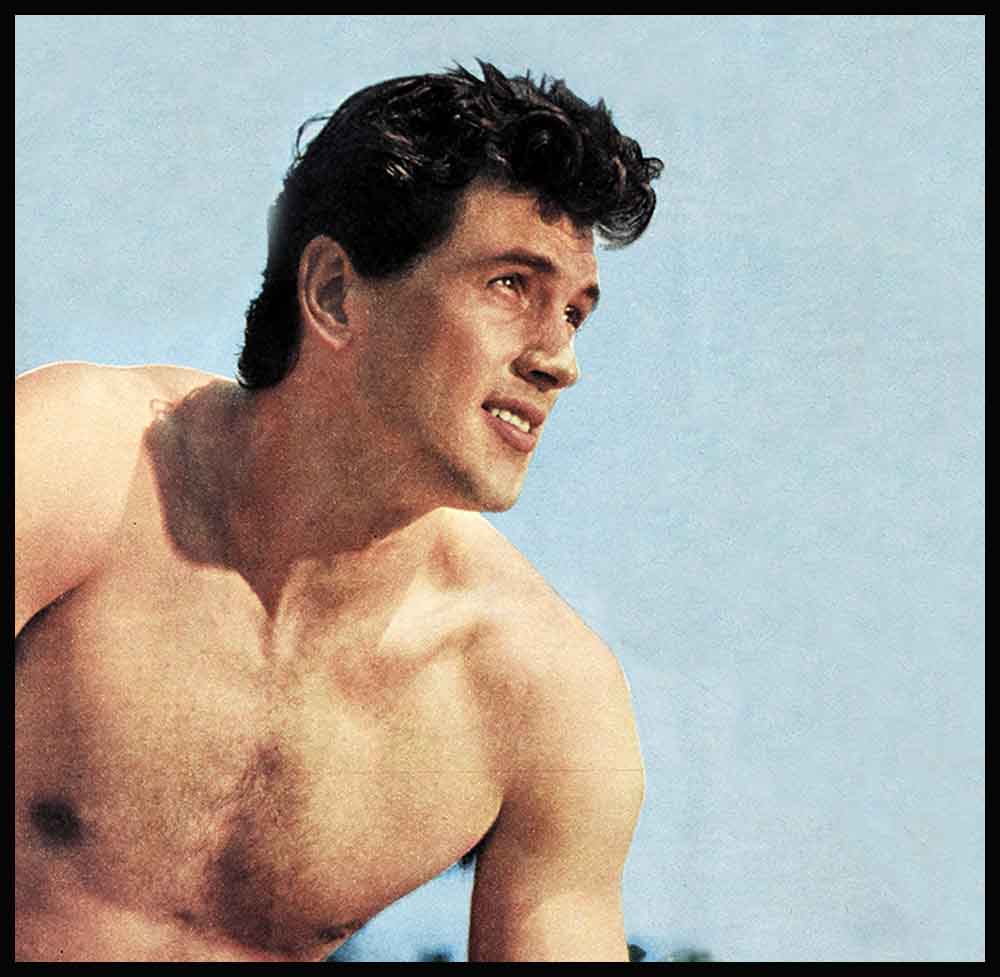 Rock Hudson: “I Was The Shyest Guy In Town”

The first time I ever played a love scene, true to all movie tradition, was also the first time I’d met the leading lady. She was pretty and witty and a star.

I was nobody, but when the script told me to kiss her I did. Very gladly and quite good, I thought.

She said, “If you ever dare do that again, I’ll scratch your eyes out.”

“Do what?” I mumbled, terrified.

The picture was “Peggy.” The star’s name was Diana Lynn. Somebody quickly explained to Diana that I honestly didn’t know what the word “upstage” meant. And that was the beginning of a beautiful friendship.

We can both laugh about it now—but then, and it was only a couple of years ago, I could hardly say a word.

I was too shy. Sounds silly, doesn’t it? But I grew up being shy.

I came to Hollywood in the same dumb stage. I was just out of the Navy. I’d saved up the last two months of my discharge pay to get the fare to Los Angeles. All I wanted to do was to get into the movies—but I was afraid to admit it. I got a job in downtown Los Angeles and I was sure everybody would laugh if I asked how you got to the part of town that is Hollywood.

So help me, it took me six weeks to find that out. Then when I finally did get “discovered” I kept on being so timid, both socially and before the camera, I nearly lost out. If a pal on the Universal-International lot hadn’t tipped me off that either I landed a big part in “The Iron Man” or I was through, I wouldn’t be telling this yarn.

But I am telling it because I know there are a lot of other guys and girls who handicap themselves with this same shyness. So let me give you this fast commercial: If I could get over being shy, anybody can.

There’s another step involved, too, but let’s take the first one first.

In case somebody is snorting, “How can a big ox like Rock Hudson be shy?” let me answer that it comes easy—very easy to anybody oversized. Particularly when you’re growing up.

That’s because you grow up and up and up. From the time you’re seven, you’re the biggest thing in your class—and they expect your brains to match. If you’re like me, they don’t. When I was twelve and in the seventh grade, I was nearly six feet tali.

I looked like a match walking. I weighed a hundred and thirty. Now, at six-foot-four, I weigh two hundred. But then I could barely carry my hands and feet. They were so huge they spread all over everything.

Socially, I was sparkling as lead, too. That word “social” meant something in my home town, Winnetka, Illinois. I love that town, always did, always will. But it is a rich suburb of Chicago and it definitely has two sides of the track. I came from the wrong side.

Yet the best things I know today about good manners, kindliness and gracious living were taught to me by the mother of one of my school chums who lived on the right side.

The big thing about being shy is that it not only spoils your own enjoyment, but the enjoyment of everybody around you. I know now that everyone is generous. We all want to give. But the “give” works both ways. If someone has been kind to you, you should reward them with your appreciation warmly spoken.

In my own case, all I used to be able to do was mumble, “Thanks.” Take the dancing teacher in Winnetka, who gave me free lessons. She was a wonderful teacher and instead of its being the rich kids’ duty to go to her weekly classes, they looked forward to it eagerly. I never could have afforded the lessons, but she spotted me hanging around one day, invited me to dance with her, and then volunteered the other lessons. I was nearly overcome, and to keep it from being too much a thing in my mind, I told myself she liked dancing with me just because she was tall, and the average kid in the class only came to her shoulders. I’m even more grateful to her today than I was then—because now I know that hers was real generosity. But when I was ten, I couldn’t possibly have told her what those lessons meant to me.

Actually, I think it was because I was so shy that I fell so violently in love the first time. I know all the clowning that goes on about so-called puppy love. It wasn’t fun with me. It was deeply serious.

For all the girls, growing up, who feel shy because they are not beautiful, let me say right here that I don’t believe I would have fallen in love with this first love of mine if she had been beautiful.

My girl was much too plump. She didn’t know how to dress. Her skin wasn’t perfect. But—and this was the big thing to me at that time—she was fun. She wasn’t scared. She knew how to have fun. When it wasn’t right there in front of her, something like a party date, let’s say, she went out and made fun for herself and everybody concerned.

There I was, twice her size, exactly her age, but it was she, not I, who dis- covered the break in the hedge of one of Winnetka’s big estates. She was the one who found out we could slip through the hedge and go swimming in the estate pool.

Boy, how beautiful that pool seemed to me then! I thought it was the most beautiful swimming pool there could possibly be—and do you want to know something? Now that I’ve seen hundreds of pools in Hollywood, I’m sure that it was!

It started like a brook, rambling along the back of a hill. Its diving board came out between the branches of a tree. Then the stream widened, spreading out into a wide, round, very deep pool.

Let me tell you that when I finally do marry and have children—lots of children, I hope—the very first thing I shall teach them is sports, all the sports. I think this is especially fine for girls. I don’t know any fellow who wants his girl to be the demon athlete; but when a girl does swim at least reasonably well—when she can take a swing at a golf or a tennis ball— she can meet a guy on a wonderful level of companionship. I shall teach both my sons and my daughters all the games. And while I’m teaching them games, I’ll also try to teach them how to talk—and talk well.

My girl could talk well. And all I could do was lie there by the pool, watch her, and listen.

We went there nearly every day in the summer, even when it rained, my girl and I. When I had the price, I’d bring along some candy bars, and after we’d been swimming, we’d lie on the grass and look down across the lawns at the big house of the estate. It made me dream.