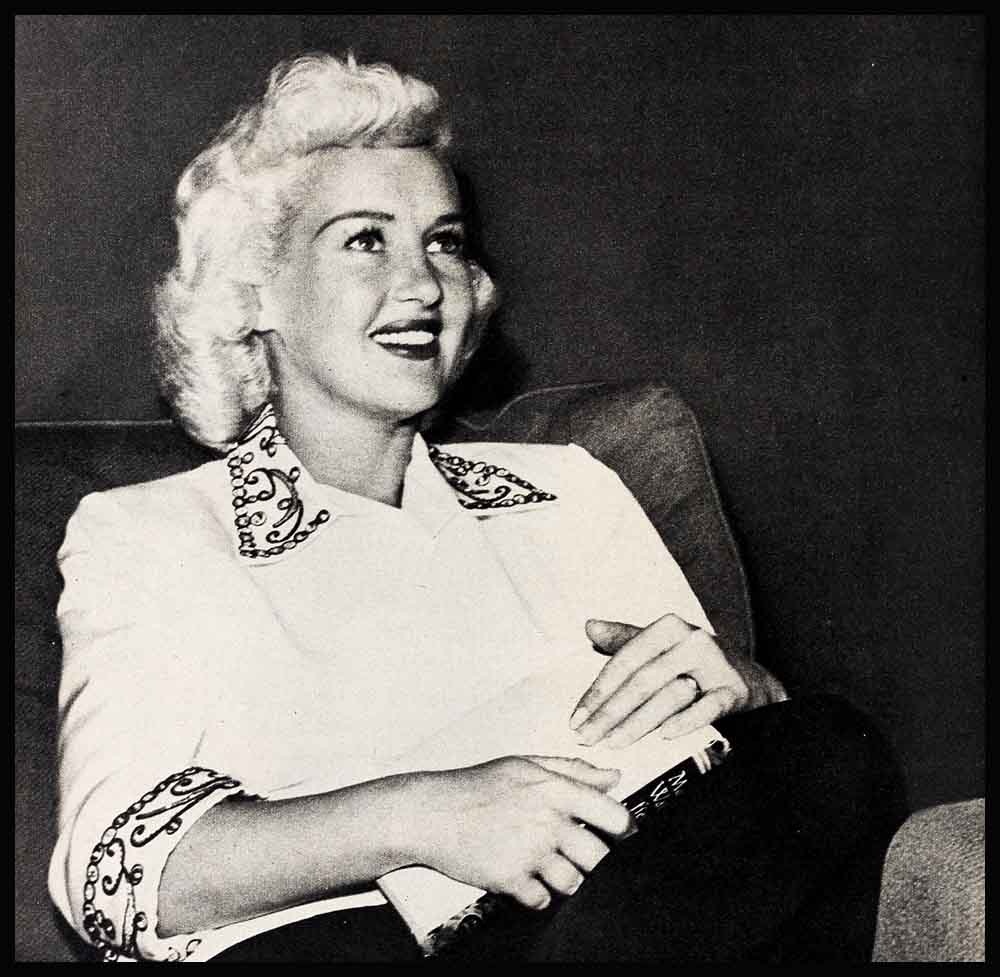 Betty Grable and Dale Robertson had just finished a scene for “The Farmer Takes a Wife” and, at long last, lunch was called. They were late that day—not breaking until after one o’clock. The crew watched as Betty and Dale strolled leisurely off the set. They knew that when the two stars neared the telephone, the pace would quicken. As usual, Betty reached their goal before Dale. “Mothers first,” she reminded him with a grin. “Stand in line, Pa.”

A lengthy conversation later, she put down the receiver. “Everything’s okay at the James’,” she reported. “Now you can check on your daughter.”

“You sure haven’t changed much,” said Dale in mock sadness. He well remembered the time they had appeared together in “Call Me Mister,” and Betty kept the telephone line busy with four and five calls a day to the James residence. “I’m a worrier,” she’d explain. “And it’s so reassuring to hear that everything is all right.”

To most people in Hollywood, Betty is Mrs. Harry James—an extremely talented girl who happens to be a movie star. It’s never been a secret that she prefers home to studio, and during her recent long absence from the screen, it was rumored that she might go into permanent retirement. The idea was no doubt tempting. For during that time, Betty had the opportunity to enjoy her home and children fully for the first time in their lives. She took them on picnics or to the Beverly playground, where there is a miniature train and merry-go-round and Ferris wheel. She took them shopping and, of course, to the races. Both girls naturally love that sport which is such a passion with their parents, and Vicki even pores over the Racing Form and picks her winners. On one occasion, Betty took Vicki with her when she went to the races in San Francisco. “She was so good,” says Betty, “it was like traveling with a girl friend.”

Fame is fine with Betty and she’s grateful for the success she has had. But this other life of Betty’s—her private life—is the one she values above everything else. And she prefers that the spotlight be kept away from Vicki and Jessica. “I want them to lead normal lives,” Betty maintains.

Betty made her own professional debut at the early age of seven and she isn’t sure she wants that sort of childhood for her girls—unless they want it. For instance, when Vicki was six, she took a few piano lessons—from the same teacher who had taught Betty to put over her songs. But Vicki showed little aptitude and no interest and the lessons were stopped. “I didn’t see any point in forcing her,” Betty explains. “I was coaxed to take dancing lessons. My mother would promise me that I could ride horseback if I would take them. That bribe never failed! If I could go riding on Sunday, I’d go to dancing classes weekdays. It worked out fine for me and I’m grateful to my mother.”

It was her mother’s confidence and courage that sustained Betty in the difficult times before she finally established herself as a top star. However, now that Betty Grable is a star who knows the motion picture business backwards and forwards, Mrs. Harry James has one thing on her mind—her family.

According to Betty, her girls are almost exact opposites. Vicki, she thinks, will be tall like her daddy, and she has red hair and a light sprinkling of freckles, whereas Jesse is blond and tiny—more her mother’s build. Vicki, incidentally, is already worrying about the freckles; she wears a cap with visor and more willingly endures applications of zinc oxide than Jesse, three years younger and the tomboy of the family. Both girls sunburn quickly, and their mother has explained that little girls have to take care of their skin. Different as they are, the girls play happily together. Although Jessica struggles to emulate her big sister who can climb higher, swing higher, run faster, and in general do everything better, there is no jealousy.

“I guess I am very lucky,” Betty says, ‘‘to have such good children. They are never a problem. Oh, of course they do things they shouldn’t now and then. The other morning Vicki was running around without her slippers. She knows I have told her not to do that, and that she will be punished. I haven’t had time to do anything about it yet, but she realizes the punishment is coming—that she will be deprived of somethings she wants, and she will accept it.

“I never bribe them. For instance, I would never say, ‘If you do this, I will give you that.’ I believe in making them mind. because I have learned that children are much happier if they are not spoiled. My girls don’t cry. They never have tantrums.”

During the school year, the children go to bed at eight, but in summer, they stay up until nine. And they love it. They keep a regular summer schedule; after breakfast, they go outside to play, come in for lunch at noon, then nap until three. They always have dinner with their parents. After dinner, there is television, or perhaps Vicki will read Jesse a story.

In the James household, every holiday is a special day for the children. Betty decorates the dinner table to suit the occasion, whether it is a birthday or Valentine’s Day. On Hallowe’en, she and Harry wander about the neighborhood with the girls while they ring doorbells and fill their paper” sacks. At Easter, Betty hides the Easter eggs for them, and on the Fourth of July, she buys fireworks and lets the children stay up to see them.

After the long period of being together during her suspension, it was equally hard for Betty and the girls when Mother had to go back to work. But Vicki and Jesse hid their tears, as they always try to do.

That, their mother feels, is typical of her children. They have an almost adult understanding and acceptance of things. They know nothing about glamour—Betty is just “Mommie” to them—but they do understand about her work.

As, for instance, last June, when it was time for the final exercises at Westlake, the girls’ school both children attend, Betty sadly explained that she could not go.

“I could see tears in Vicki’s eyes as she turned away,” Betty remembers, “but she tried to keep me from seeing them, tried to protect me!”

Even when working, Betty spends as much time as possible with her girls. Every Wednesday and Sunday, they dine out, and sometimes go to a movie, if there is a suitable one Betty always washes their hair herself, sets it, and puts each girl under a dryer with a magazine. Like all youngsters, they like to play at being grown-up and their mother, remembering how she used to like to totter around on her sister’s high-heeled shoes, lets them have access to her belongings.

She buys all their clothes, and loves to take them shopping with her. Both girls have definite likes and dislikes, and both love pretty clothes. Harry and Betty seldom go out in the evening and rarely entertain, but on the few occasions when they do dress up in their best, the little girls are thrilled and excited. Recently, when Betty, ready to go out, went in to kiss them good-night, Vicki cried, “Oh. Mommie, you look just like a bride!”

Jesse said softly, “Very, very pretty, Mommie.” They love to feel the material of her dress or wrap, and they always notice if she is wearing anything new, even if it’s only a pair of earrings.

“I don’t get things for Vicki if Jesse can’t have them—like roller skates, for example,” Betty says. “Vicki can swim and Jesse can’t, but I don’t let Vicki go in the pool except with Jesse and me. I never show any favoritism, so there is no jealousy.

“I don’t know much about modern psychology,” Betty will tell you. “I have a lot of fun with my two girls. I don’t talk down to them, I treat them as adults. And they are wonderful company for me when Harry is away. I’ve talked about my method of punishment, which is simply to deprive them of something they want, but actually I very seldom have to resort to it.

“But don’t get the idea that there is anything namby-pamby about them—they are two normal, healthy, active children.”

When she’s working, Betty likes to stay busy. It makes the day move more swiftly toward six o’clock. “This is the happiest hour of my day,” she says. “Every night when I turn into the driveway, I ‘toot’ my horn and out of the front door, they come tumbling—the two girls and the two dogs!”

You don’t need to read any books on psychology to know that here is a happy family—and that the main reason for that happiness is the eagerness with which Betty Grable doffs her glamour with her screen costumes, to play her favorite role, that of Mrs. Harry James, or just “Mommie,” to Vicki and Jesse.