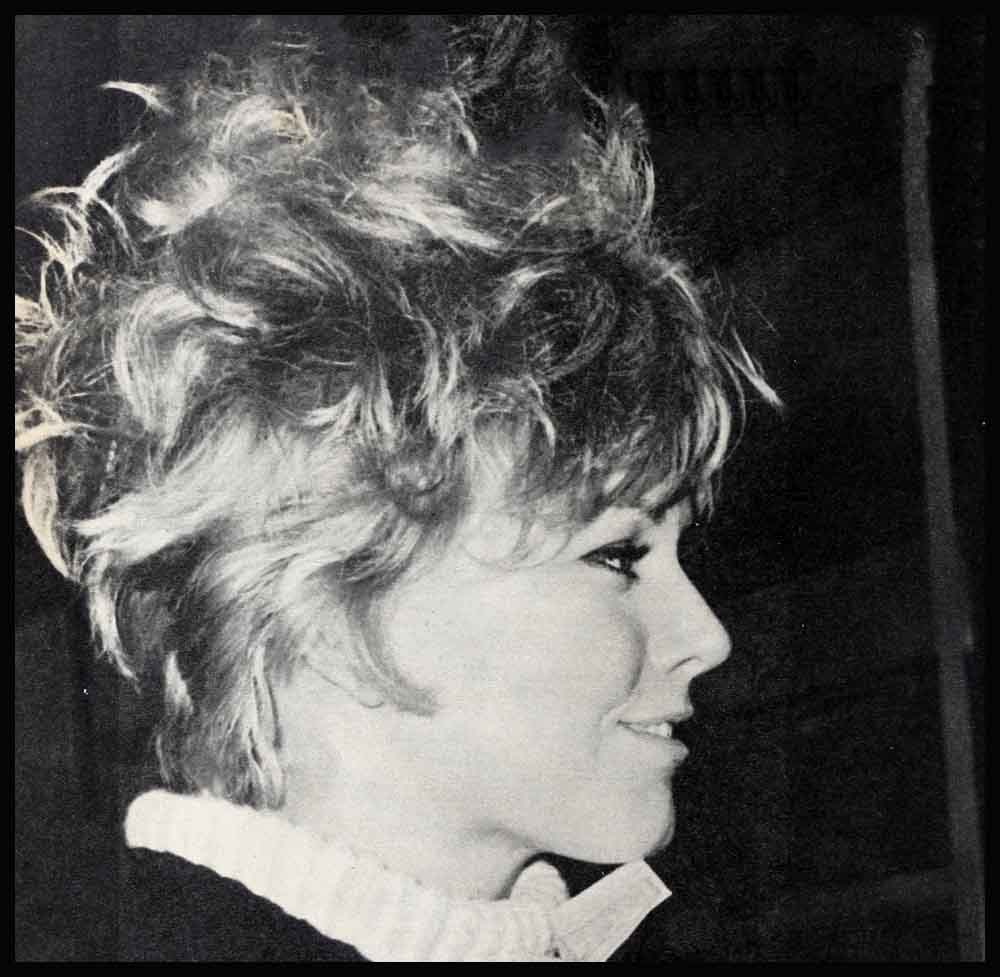 What Kim Brought Home From Paris?

Kim was crying when the flowers came. She was in tears from the loneliness of a strange city, Paris, and she was weeping because she had just read the remnants of a dream splashed in black French headlines.

Now even the French public knew it was over between Kim and director Richard Quine. It was only a news item to the public. But to Kim it was the final, staggering, soul-quaking end to a hope for happiness as Mrs. Quine.

A messenger brought the small, tastefully designed bouquet of roses. The card enclosed implied: “Kim—You and Collette must spend the weekend at Georges’. I will be there. We will have a nice time and forget our problems—Louis.”

Kim had stared out the window of the little Left Bank apartment of her friend Collette Roubon. She regarded the smoky stillness over the River Seine and thought, “It would be a way to forget.”

As Kim told the editors of PHOTOPLAY, “I was tired of tears. I was tired of disappointment in myself and in others. when Dick and I decided we’d be better off apart I knew the announcement would send the reporters and photographers after me in a pack. They knew where my apartment was and a hotel was not a hideaway. When Collette offered to share her place with me, I accepted. I just disappeared. I wanted emotional seclusion. And I got it.

“But the flowers from Louis did something for me. He was right. He is very charming, has a marvelous sense of humor and he has a wonderful unserious way about him, a way of accepting reality but not being disillusioned by it. That’s my big trouble, I guess. Louis and I were both born on February 13. Collette and I spent that weekend at Georges’ and Louis was there. But the notion some people have that there is anything between Louis and myself is nonsense. What they’re saying about us just isn’t true.”

Yet, though Kim rejects reality and he makes light of it. they now must face it head on—because it looks as if, once again, Kim Novak will be pointed out as a “home-wrecker.”

Louis Feraud, thirty-nine, is a Parisian fashion designer, comfortably married with a fine wife and lovely children. He pursues, with unusual success, a profession that has swamped others with failure.

Suddenly with ali the rush of a snapped stitch he has been engulfed in a wave of emotions that comes from a lonely and disillusioned woman, a woman who is considered by some to be more beautiful than Liz Taylor. That woman is Kim Novak.

The whispers of the Novak-Feraud romance spread through Paris like a grass fire in dry season.

Extra-curricular love affairs in other- wise sound marriages are not new to sophisticated Parisians. But in this case an American beauty, Kim Novak, had come to Paris to marry the American movie director, Richard Quine. Suddenly the wedding was postponed. And suddenly Quine was gone and the lonely beauty remained.

How does it happen? Is Kim the victim of a compulsion that lures her to love and then drives her back into the ache of heart and torment of the mind? Every close friend of Kim’s has a different answer.

“She has the warmest, most beautiful body of any woman I have ever known,” says an ex-lover, “but she suffers from one of the most terrible cases of cold feet I’ve ever seen, too. She is a little like a beautiful race horse. She never balks at the start, it’s the finish line that scares her.”

“People just don’t understand Kim,” says a Novak girl friend. “But her problem is very simple. She simply does not believe in the permanency of love. For herself, yes; but it is impossible for her to be sure that the man will be faithful. Hollywood’s done it to her. She once said that her only dread of marriage is that two years after the wedding she’d wake up some morning and find her husband gone and then realize that she had been only the legalized wife to a man who never intended to be true.”

Another girl friend has this to say: “Kim doesn’t know what love is. When I tried to explain to her that no woman really knows what love is, the answer didn’t satisfy her. She insisted that love ; was bound to make her feel different, different from any other feeling she’s ever had. She said she’s never met a man who gave her that feeling long enough to convince her that it would always be there. Maybe she’s right.

“This thing with Feraud. I’ll guarantee you it won’t last three months.”

A man who has known Kim since she was a commercial model, opening and closing display refrigerators, says. “I know Feraud and I know Kim. I can see him losing his head but he is involved with a woman who just never has grown up. Kim is still living in the fairyland of her childhood. Her world abounds with Prince Charmings, gentlemen mysteriously wealthy, adoration, pomp, splendor and adventure.

“Feraud, Pd say, is a fairy godfather. He touches you and you are beautiful. You must remember his success in his profession as a fashion designer depends almost entirely on his imagination, his creativity. He lives in a world remarkably similar, in some aspects, to the world Kim lives in. I’m not at all surprised that they have hit it off so well. I only hope Mrs. j Feraud understands. If she doesn’t, Kim and Louis are in trouble.”

Kim and Louis are in trouble, for Mrs. Feraud doesn’t understand.

So great is Mrs. Feraud’s lack of understanding that according to all reports from Paris she had a long talk with her husband and in calm, certain tones and with words any husband could understand, she said:

“Louis, I am your wife and the mother | of your children. Until now we have been happy. I am grateful for that. For a long time I have ignored the talk and the backstairs gossip about you and this woman from America. But it has now reached the point where I must ask you to deny these terrible rumors. I am sure I need not tell you why.”

Feraud is said to have looked at his wife i helplessly.

The Frenchwoman knew what she had I to say next.

“I will not say anything more about it I then,” she added. “I have only one final question. Whom do you choose, Miss Novak or me!

How long it took him to reply is not known. Whether he ever replied at all, in I words, has not been confirmed. His answer, however, can be found in the fact that a few days later he boarded a plane for Los Angeles and Kim.

The only thing Kim wants

His arrival must have been important to Kim. It was the rare occasion that could draw her from her picturesque hide- away by the Pacific Ocean in Carmel, a small artsy-craftsy community in northern California. Kim came to greet Louis.

Is she in love with Louis?

The question when put to her by Photo- play didn’t seem to shock her. “I’ve been waiting for this,” she said, with a weak smile. “But I am not the reason for Louis’ visit to Los Angeles. What everyone seems to forget very conveniently, is that Louis has just put a new assortment of fine perfumes on the market.”

We asked Kim if, since she was not in love with this man, could she tell us why she has never been in love.

Again she smiled. “How can I answer that without sounding foolish? If I knew why, I’d have done something about it long ago and maybe I’d be a mother by now. What do you think I pray for?”

But, we pointed out, there has been an alleged separation between Louis and his wife and also a rumor that Kim was the cause of it.

“People could say I broke up the marriage of any man and wife. Does that make it true?” she asked. “I have come to meet Louis for—well, I like him. I like him very much. And for a reason that any woman can understand—he is bringing me a wardrobe of beautiful clothes which were not completed before I left Paris. I’m dying to see them.”

Nonetheless, for all Kim’s protests, it is held that Kim was dying to see Louis for a lot more than a look at a new wardrobe.

Did Kim’s interest in Feraud break up her intended marriage to Dick Quine?

“That’s the most ridiculous rumor of all,” Kim said. “I was in love with Richard, I thought. But I guess it wasn’t love. As time went by I realized that Richard and I were so different not even compromises on both our parts would ever reconcile them. I mean that whenever I was with him I felt I had to be somebody other than my self. I had to be what he wanted me to be and to add to the confusion I was never quite sure what he wanted me to be. I think that a woman should make some sacrifices for the man she loves, but some part of her basic nature and personality should remain even if it’s only for simple security. How could I go into a marriage that I knew would demand that I be a totally different woman?

“Louis had nothing to do with it.

“If you really want the truth I will tell it to you. I have known many men, but never one I could love for the rest of my life. when it happens—and it must happen or I will die unhappy, there will be no question about it.”

But there may be if Kim is not careful. For one of the most beautiful women in the world is well on her way to making the mistake that many an ordinary girl makes. It is a philosophy that has turned a thousand would-be wives and mothers into spinsters.

Kim Novak obviously believes that there is no such thing as love—only the promise of it.

Kim has been signed by Seven Arts to play the role of Mildred in “Of Human Bondage,” which will be released by M-G-M.