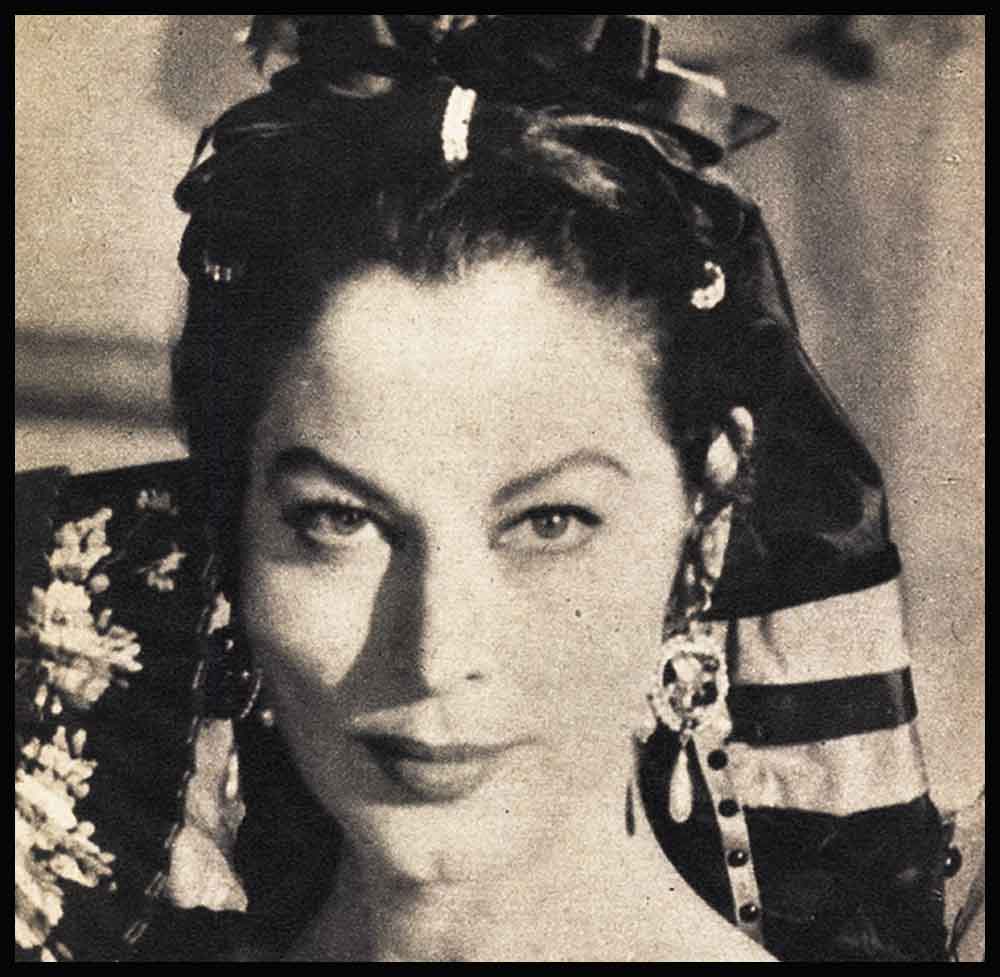 Ava the flamboyant? Ava the sensuous creature of a thousand rumors? Ava the brown haired misunderstood beauty? Ava the insecure? Ava the lonely?

Take your pick, but whatever yon choose as her designation you must remember that Ava Gardner remains the unchallenged queen of Aphrodisia to millions of men all over the world.

As she lay back on a couch in Italy where she was making a movie, those that had been with her for the past few hours watched with the secret amazement and awe that even her close camp followers experience, the complete change in her demeanor and attitude from what it had been — an hour before — and the different thing that it had been an hour before that.

She had done a sharp Flamenco dance earlier, excited, face flushed, thoroughly enjoying herself. Then she went into a deep brood and now she was relaxing on her couch listening with a soft, nostalgic smile on a face that had softened into true remarkable beauty, to Frank Sinatra singing on record, “I Fail in Love Too Easily.”

Is that the theme of her life? Some say quite to the contrary. They allege that she is really a frigid woman out for high kicks and when a man feels the end of her boot, it makes the kick quite the more enjoyable.

She made known to the others that she “loved that song”, and as she listened she drew her skirt above her knees, regarding her legs with an objective indifference not felt by anyone else.

From Sinatra. the eloquent crooner, to some of the eloquent, and in- eloquent Matadors, she has driven many a man mad with love and jealousy. The combination of wildness and practicality is another thing that puzzles her intimates.

In 1954 she expatriated herself to Spain. Living under the generally discredited Generalissimo Franco regime would have little meaning to the politically unconscious Ava. What did have significance is that she is now a permanent foreign resident without income tax. She averages over $7,000 per week for a good part of the year and is reported to have amassed well over a million dollars.

Not bad for what some of her sentimentalist friends characterize as — “a little unhappy girl from the south . . . This cliche is about as fitting for the wildly glamorous Ava as a pair of jeans on one of her bull fighting friends as he goes out to conquer el Torro.

She is really a strange one, really a mutant of her generation and background, and undoubtedly more envied by the clean-cut American girl who would be quick to discredit her verbally, while secretly drearning of living Ava’s glamorous, frenetic existence.

Ava could step back through time, and tomorrow enter and be enthusiastically accepted in the “roaring twenties” world of F. Scott Fitzgerald. Without doubt, she turned in a knowledgeable and excellent performance as the sex-hungry, hard drinking, adorable Brett in Ernest Hemingway’s “The Sun Also Rises,” a bible of that era.

There are acting cults in Hollywood who work like slaves at their art. And they are successful, make a lot of green and “live it up” as much or more than anyone. However, one of their tremendous compensations is a pride in their work and accomplishment.

The actual subject of “acting” to Ava is a moot point. It represents to her only a feed line to a way of life that she demands, and she knows little of the fringe benefits that the sheer work can contribute. She never looks for fringe benefits. She wants the mother lode.

The view of her past marriages is less an insight into what makes Ava tick than it is a further proof of her impetuousity and adventurous illogic.

Mickey Rooney, the enfant terrible; Artie Shaw, the musical and intellectual cowboy; Frank Sinatra, the imperative singing lover. Each one a full-bodied man but certainly a diverse choice of gentlemen.

This history then could be the reason for Ava’s affinity to the love and play boys and the bullfighter.

The Matador, too, is a strange man. He represents a far cry from the Messrs Rooney, Shaw and Sinatra. He represents strangeness, mystery, adventure — Ava’s middle names. He likes to love and he likes to play. To a great extent the succinct and tight-lipped Matadors are the real match for Ava. Whatever they feel behind their thin faces and tight lips they will say only in two places, the bull ring and the bed. While people like Rooney, Shaw and Sinatra will eloquate — the Matadors will wait. After all. it is part of their profession.

When Frankie made a frantic trip to Spain, motivated by the stories he had heard of the romance between the indomitable Luis Miguel Dominguin, thin, insolent looking and very handsome: he was amazed to find not only a man of severe and real potentialities, but a man with a true compassion for Ava. A man who had conquered some 3,000 bulls and was something of a millionaire as well.

To the hero of millions in the Estados Unidos, it must have been quite a shock to see this man look at him as if he had acquired some kind of invisibility and wasn’t quite present at all.

Frank was ignored. He didn’t like this at all and it is quite a comment that free swinging Frank, who really is not afraid of anyone, and who has a liberal sense of excitement, didn’t start punching. It is just that he was so damned hurt by the rebuff he was probably planning a bitter campaign against Hollywood womanhood. He’d show Ava. And according to reports he did — chapter and verse, via transatlantic phone. He told her about his escapades with the willing Hollywood glamour girls and avant-garde Ava ate her heart out.

But in Spain there are always the Matadors.

Ava genuinely loves bull fights and bull fighters. The blood and gore, the wounded horses, the Ole, the of ten unrelenting brutality, the sometimes wounded and courageous Matador — and, of course, most of all, the climatic pleasure, the killing of the bull, fills Ava with passionate and impulsive excitement.

Ava is on the bull fight kick up to her ears. Those that have seen her at these contests of man and beast relay the almost İnconceivable flush of excitement about her that positively appears sensual.

Does the bull represent some charging ugly thing in life trying to snuff her out? Does the vanquishment of the beast signify another victory over this deadly enemy? After all isn’t the world full of stags and bulls? Isn’t life one big bull fight with the world watching and waiting for your bleeding heart — especially if you are a world famous movie star with an international address book of loves and losts.

The sight of a pad and pencil, a press card or even a pushed back hat is enough to send her into an avalanche of fury, employing a vocabulary usually reserved for longshoremen after they have dropped a heavy load on a sore toe.

But the skinny, exotic men in their colorful tights and frilled blouses don’t have to wave a cape to make Ava come running. Not that they don’t stumble over their swords in an attempt to meet Ava. Her romance with the famous Matador Mario Carbe was filled with poetry, written by him — dedicated to Ava. Ava enjoyed Carbe’s poetry as well as his bull ring victories. But Sinatra sent him packing as soon as he arrived in Spain, because Ava s heart still belonged to Frank.

This handsome king of the bull fighters showered his attention on Ava in grand Latin style. This famous, retired, millionaire matador did everything in his power to woo the Hollywood glamour girl It was at Luis’ beautiful ranch outside Madrid that Ava took a fling at the bulls in the “home made” bull ring that Dominquin built for his own amusement.

In a setting of 6,000 acres and a 20 bedroom house, Ava let the bulls come at her in the private ring, as Luis stood protectively by. She handled herself with daring and skill, an ever-present commodity of hers when facing danger or mastering things indigenously Spanish. Again, after she had accomplished this feat there was in her that accelerated emotion, the eyes flashing with excitement, the quality of “this is living,” emanating from her.

In the course of the romantic Dominguin’s courtship, he showered the movie queen with roses and spent long nights at the hospital when she w as ill with a kidney ailment. Despite the rhapsody of this romance, it broke up and the handsome matador married an Italian movie star.

Such affinity and proximity has Ava to the world of bull fighting that she bares a now almost erased scar from an encounter. It happened on the ranch of Angel Peralta. Once again that desire to put her life out on limb caused her to insist on entering the bull ring on a horse. The horse threw her and she was kicked in the face by a young bull.

The accident caused panic because the fact that the star lives by her face and her vanity on the movie set and elsewhere, is legendary. However, the miracle work of top plastic surgeons practically erased the mar.

No one can predict the next chapter in the saga of Ava Gardner; she, probably least of all. There is in this woman a driving force that seems to lack definition. There is quixotic quality in her that battles windmills that can be damaging to the heart, the spirit and the body. All in the name of fun, adventure and danger. She is a woman of experiment in all areas and alongside her beauty. it is one of the secrets of her immense desirability.

Her true capacity to love is really unproven and is not validated by international shenanigans. transcontinental phone calls and overseas letters. She wants affection, but can she truly give in kind? Some offer the cliche that Ava is denied the normal life by her stardom and international fame and publicity, that she really wants and dreams of the simpler phases of life.

Others say that if Ava dreams, it is of bigger bulls and bull fighters, of continuing to make the capitals of the world her playground and the men who populate them her courtiers. And most of all to ward off the inching, corrosion of time.

And as long as there are enough camp followers. lovers, hangers-on, etc. in her entourage to shout an encouraging “Ole” the chances are that Ava will go on her mad, merry exciting way.

It is a quote. EXCLUSIVE MAGAZINE NOVEMBER 1960