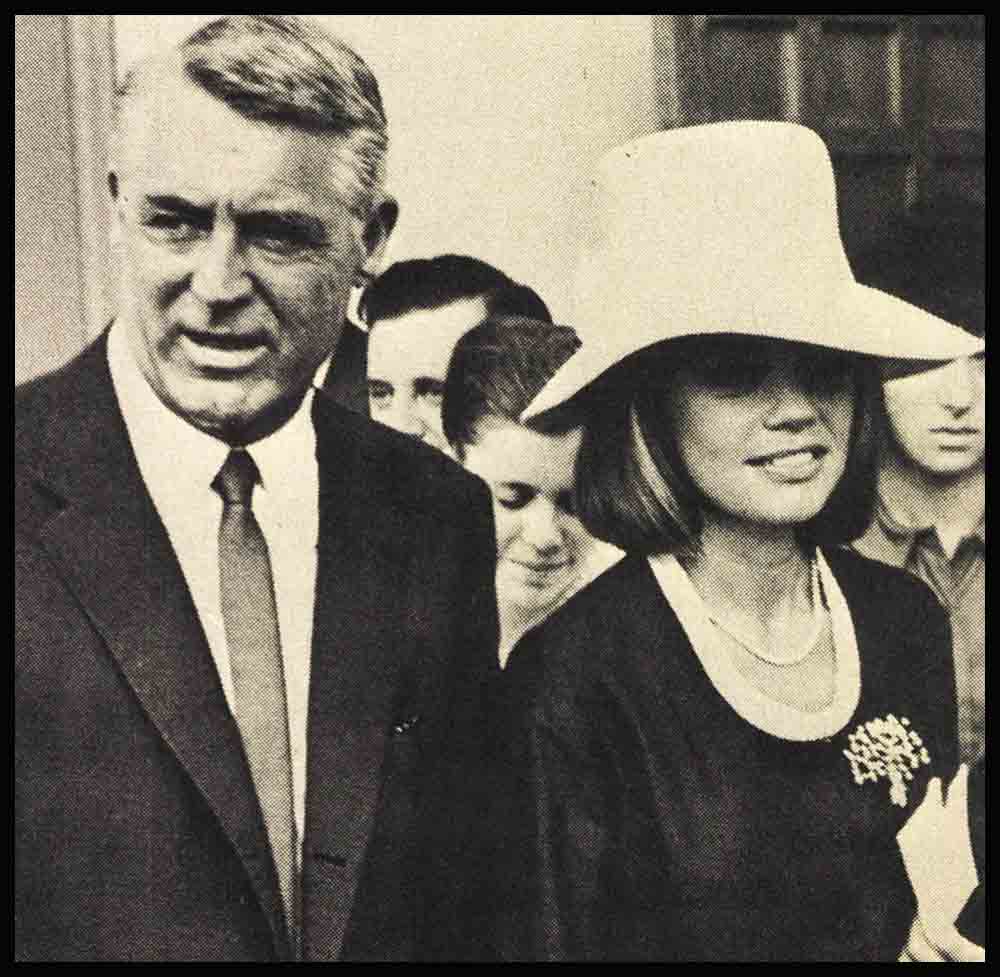 and everything nice-which ones will fail? Which will suffice?

Has Cary Grant been stepping on 4-leaf clovers lately? For it took him 4 years to marry Dyan Cannon (July 22), and 4 marriages to become an expectant father. The famed actor is 62, only 34 years older than his new wife.

Not a “plain Jane” herself, Jane Fonda hitched herself to quite an unplain specimen. Thats what Brigitte Bardot bragged when she was Roger Vadim’s bride. They married Aug. 14 in Las Vegas.

Doug McClure is quite settled in his role on The Virginian (his fourth season); hope his marriage to Helen Crane (Oct. 27) will be as lasting— his 1st two marriages were brief. Helen is former wife of Steve Crane.

Climaxing a four-year courtship that began when Tim Considine and Charlotte Stewart were cast as sweethearts in the TV series My Three Sons, the two were married October 23.

It’s true that Susan Strasberg left her husband, Chris Jones, as of Oct. 19, to go back Home . . . the reason, to tell her parents she’s expecting. The couple live in Los Angeles where Chris is starring in Legend of Jesse James.

Negro singer Leslie Uggams, and Australian businessman, Graham J.K. Pratt, claimed the only obstacle in their 2-yr. courtship was distance. But problem was solved Oct. 16, when they married.

Five husbands and one stabbed boyfriend later, Lana Turner wed businessman, Robert P. Eaton, whom she has beat in marriages by four times. The double ring ceremony on June 22 was held at the groom’s Va. Home.

MARRIAGE ON THE ROCKS

The Good Doctor tried, but couldn’t pull his marriage through. Bride Kathy Kersh filed just 2 months after the nuptials, demanding $5,000-a-month for herself and her baby. A reconciliation failed, divorce was granted.

When a reporter recently queried John Gavin whether he and wife Cicely were reconciled or estranged, he answered, “That’s a nice tie you have on.” John simply refuses to discuss his marital status, but there have been more downs than ups for the couple lately. Married since 1957, they have two darling daughters, Christina and Maria.

The divorce of Betty Grable and bandleader Harry James last October stunned both friends and fans. Married 22 years and the parents of two daughters, theirs seemed an ideal match. But the former pinup girl turned Las Vegas headliner (l.) revealed, “It wasn’t a sudden thing. I thought it over for a long, long time.” Betty charged extreme cruelty, but waived alimony. Just a year before she and Harry were the beaming parents of the bride as daughter Vicki wed William Bivens (r.)

Nick Adams rang in 1965 by dumping his marital woes on unsuspecting viewers on the now defunct Les Crane Show—wife Carol included. Spent rest of the year mending his ways, but to no avail. Carol dissolved the union, Oct. 12, ’65.

Last reports had it that Burt Reynolds and Judy Carne were kaput after two years of marriage. Hopes for a reconciliation are dim as legal proceedings wind up. Conflicting careers picked up the rap for this one.

By far the most joyous news of the year was the birth of a happy, healthy baby girl, Lucy, to Pat Neal and Roald Dahl. Pat carried child through her triple stroke. Tessa and Theo Dahl welcome new baby.

Elizabeth Montgomery and husband William Asher were never so happy when their 1st son, William.. Jr. was born in ’63; but even happier now that he has a brother (Robert), b. Oct. 5.

Michael Ansara beams bald and proud. Bald for the lead in King And I, proud as he takes his first photo with newborn son, Matthew Michael. Mom is Barbara Eden, who gave birth to the nine-pound beauty in Los Angeles’ Good Samaritan Hospital.

Baby Antonio Cimber was the first born to actress Jayne Mansfield and her director husband, Ottaviano Cimber. Jayne had four children by her previous two marriages. One of them, Miklos, takes his 1st look at his brand new stepbrother. Antonio was born in Hollywood’s Cedars of Lebanon Hospital October 17.

John Wayne snuggles up to wife Pilar. The 58-year-old actor and his attractive wife expect their 3rd child in February. Wayne disclosed the good news on the Arizona set of Para’s Eldorado, the 167th movie in which Wayne stars. Not long ago, he had become grandpa for 10th time.

Good friends of Hearst columnist and What’s My Line panelist Dorothy Kilgallen were shocked at her death on Nov. 8th at the age of 52. The cause is blamed on a lethal mixture of sleeping pilIs and alcohol which attacked the central nervous system. Pictured here with Miss Kilgallen, Shelley Winters and Sophie Tucker.

Known as “a heel with charm” on the screen, actor Zachary Scott succumbed to a brain tumor on Oct. 3rd. He was 51 years old. Although he had not been very active for many years in films, Scott had made enough movies to keep his name on marquees and TV sets for a long time. He was always the bad guy, the one with the evil motives in such favorites as Cass Timberlane , Mildred Pierce, Her Kind of Man, and most recently, The Young One.

Rita Johnson, 52, an actress popular for playing “the other woman,” died in Los Angeles on Oct. 31 st. The cause was blamed on a head injury which induced heart failure. In 1948, at the peak of her career, Miss Johnson was severely injured when a hair dryer collapsed on her head. The old injury may have caused her death.

Singer-actress Dorothy Dandridge, who died Sept. 8th at the age of 41, was first reported as having been killed by particles of bone marrow. Two months later it was disclosed that the lovely Negro star took an overdose of “a drug used to quiet people in danger of losing their sanity.” Unlucky at marriage, she was a great success in Carmen Jones, film version of Carmen.

Marie (The Body) McDonald’s death on Oct. 2İst has been listed as a “probable suicide.” It is thought that the 42-year-old actress took an overdose of sleeping pills, much as the late Marilyn Monroe did.

The warmth and gladness of Judy Holliday remain as a testimony to her great talent The 42-year-old actress fought cancer for several years before the disease got the best of her on June 7th. Above, with Bill Holden in Born Yesterday.

The mysterious death of actor Steve Cochran on June 15th aboard his schooner “Rogue” off the coast of Guatemala caused much speculation. The 48- year-old star had drifted off with an all girl crew who reported his death.

The sophisticated lady of the screen, Constance Bennett, was just completing her comeback film for Universal—Madame X—when she was struck down by a cerebral hemorrhage on July 24th at the age of 59.