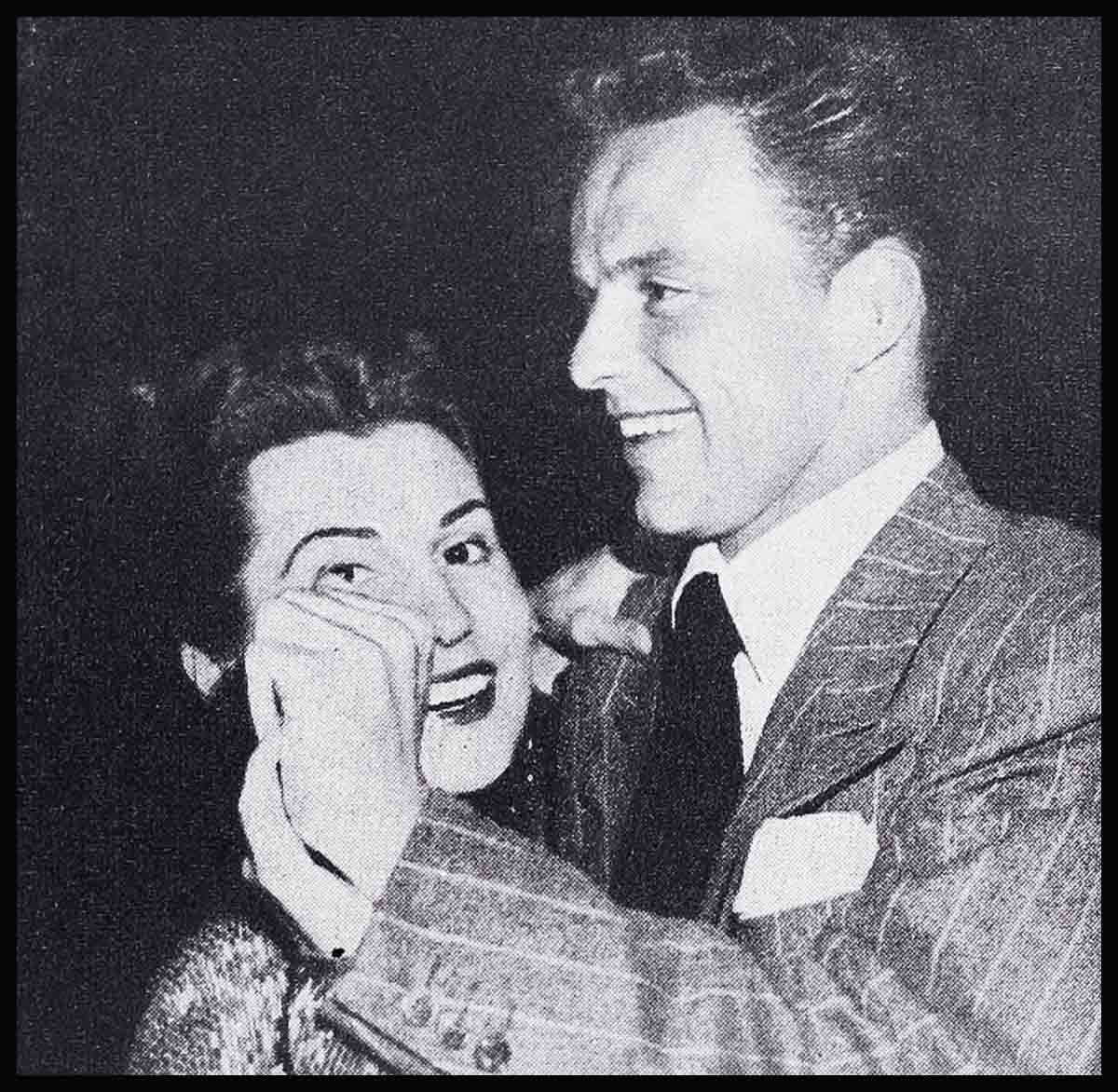 The music was swinging at Slapsie Maxie’s. The dance floor was crowded. But the minute Nancy came in with a group of mutual friends Frank saw her. He danced and talked with the pretty acquaintance who was his partner just as he had before but always he knew where Nancy was and bided the time she would dance close enough for him to speak.

When, inevitably on that small floor, their dancing paths met he stopped before her. “I’ve been hoping,” he said, “you would dance with me.” For a long minute her eyes searched those of her husband’s. Then she moved into his arms. Friends, sad over the differences which had separated them, smiled and looked away. Let them have their chance to make up now before gossip and newspaper publicity and their own imagination and pride should make the hurt deeper and the difference’s greater.

The film colony has known many break-ups in the last few years but none caused the unhappy surprise occasioned by the Sunday-night radio announcement that the Sinatras had parted. On the preceding Thursday, the commentator explained, Frank had packed his belongings and, leaving Nancy and the children at the Toluca Lake home, had taken an apartment in Hollywood.

This brief report seemed an abrupt ending to the family life in which Frank’s audiences long had participated when, at the end of his program, he had always said “Goodnight, Nancy” to his daughter and “Goodnight, Frankie” to his little son.

It is doubtful that Frank left home as the result of a sudden whim or quarrel. Over a period of time it is possible he had come to believe he had outgrown the confines of his home, his wife and their simple living. Like so many men, far older and more experienced than he, his values may have been confused by his transition from poverty to riches and obscurity to fame.

With the announcement of Frank’s break with Nancy his name was linked with the names of several glamour girls. At the Sonja Henie party the day before the story came over the air Lana Turner had been seen dancing with him several times. But Lana, who confesses her heart belongs elsewhere, says she and Frank have been good friends for years. It has been to her that he has talked of his professional troubles, often profiting by her advice. Their friendship, however, has been open. She has been a guest at his home and they have lunched at their mutual studio.

Marilyn Maxwell also came in for her share of rumors, in spite of the fact that Frank claimed neither he nor Marilyn are romantically interested, that there was no particular person in his heart, that it is just that he loved show business and wanted to be with people who share the limelight.

Frank and Nancy were youngsters when they were married. Always it was Nancy who encouraged Frank to go on with his singing, who stayed with him and by him through his lean, discouraging years.

A few years ago when Frank decided to move his family to California he bought the old Mary Astor house on Toluca Lake. Long before Nancy moved into this house, however, while she lived with Frank and their then baby daughter in a bungalow at the Beverly Hills Hotel waiting for their furniture to arrive from New Jersey, her adjustment to Hollywood and the demands of her new life began.

In her quiet way she proceeded to become one of the best-liked women in town. There is a genuine quality about her, a lack of false sophistication that endears her to everyone and in his heart this pleases Frank.

To make certain she kept apace she had her clothes designed by Jean Louis of Columbia Studios. After the Gary Cooper party, she telephoned the designer to thank him for her beautiful frock. “Everyone liked it,” she told him.

JOAN CRAWFORD has always been her idea of beauty and taste and one day after lunch at The Club she hurried home to tell Frank that Joan had leaned over and whispered, “Cute hat!”

Nancy’s good taste is manifested in their home too. The master bedroom is done simply in blue, with a blue rug and a blue quilted headboard and spread on the big oversized bed. The two adjoining dressing rooms contrast attractively. Frank’s is done in a mannish plaid. Nancy’s features feminine frills and ruffles. Little Nancy’s room too is frilly and feminine. And a large crayon drawing of her father that was drawn by a fan hangs over her bed. Little Frank’s room is red gingham with animals and clowns hopping about on the wallpaper and the curtains. The upstairs balcony is divided half into a playroom for the children and half as a guest room with twin beds for any stayer-oners. The living room has a chintzy semi-formality. The dining room is well suited either to family dinners or elaborate parties. It is, however, in the playroom, the only room in which they finally used the furniture shipped from their old home, that they spend most of their time. The two barrel shaped tables with their homey red check cloths are used for dinner tables. Although Mamie lives there as a cook it is Nancy who does all the preparing of food. Italian chicken with its rich sauce or green artichokes with a garlic clove in their folds lend a fragrance to the homey kitchen. And no matter how tempting the food there is always that side dish of cold spaghetti, left over from the day before, at Frank’s place. It is the first thing he tastes at dinner. The first thing he looks for.

Louis B. Mayer, head of the Metro-Goldwyn-Mayer Studios, is one of the many who have felt the warmth and genuine friendliness of this home. When Nancy herself cooked a dinner not long ago for forty guests, including Mr. Mayer, he telephoned the next day to say how much he had liked being there and that he had never enjoyed better food. Both Frank and Nancy glowed under the praise.

It is not a home a man would leave unless his confusion was great. Frank s actions proved this. For only a few days after he moved away he telephoned Nancy to ask if he might visit the children. “Yes, come if you wish.” Nancy told him. “I won’t be there but the children will.”

Little Nancy saw him as his car drove up. In an instant she was in his arms there in the garden. Frank Jr., who will be three this month, is still too young for companionship. But between Frank and his six-year-old daughter is a deep abiding love and understanding.

There was the night, for instance, when Frank badly fluffed a line on the air. He sat alone in the living room when he got nome and Nancy wisely let him alone. “Do you think he’d like me to be with him, Mommy?” little Nancy asked. “Try it, dear,” her mother said. So edging slowly into the room she crept close to her father. Together they sat side by side on the couch not speaking a word but drawing comfort from each other. And it was there Nancy served each of them a dinner tray.

Another evening little Nancy was sent up to bed as usual while Frank studied a new recording. Soon her crying reached the living room and Nancy went upstairs. When her wails again reached the room Frank called to her sternly.

“Come here, Nancy,” Frank said, and she approached hesitatingly, not quite sure of the outcome. Slowly he gathered her in his arms. “What story will it be, Nancy?” he asked. “Will it be Cinderella tonight?”

Life was simple at the Sinatra’s. Dinners on red gingham cloths. Bedtime stories. Frank’s bow ties which Nancy made by hand. The seldom used built-in bar, for the Sinatras are temperate people. Friends, largely people who work with Frank, song writers, radio and theatrical people, to spend a holiday afternoon or an evening. Conversation of music or the same simple homey talk that goes on in thousands of American homes, the house mortgage, the children’s teeth, the monthly bills.

Only recently was there time for restlessness. Before, with Frank and Nancy, poverty, broken hopes and dreams, then a glimmer of hope and finally the hard road up, were things to share. Through it all Nancy never let Frank down. And he was a good husband and a devoted father, even in the little ways. Although his business trips were many he never took his absences from home for granted. Always he returned with a lovely gift for Nancy and exciting toys for the children.

But success, completely realized, was different. And when Frank found the outside temptations, demands and stimulation that came with it were things he couldn’t share he began to suffer from the delusion that only with personal liberation could he hope for happiness.

However, those closest to the Sinatras believe that this mirage of happiness disappeared even as Frank reached for it, that as he closed the door of the Toluca Lake house his need for Nancy and his children and home swept over him.

No one was surprised, therefore, that night at Slapsie Maxie’s when, after a few turns around the floor, Frank danced Nancy to the door, drove her to his apartment where they had a long talk and the next day returned home.

It won’t be easy for Frank and Nancy to hold fast to their marriage. For a long time, as long as Frank’s youth and fame endure perhaps, they will have to be stronger than all the difficulties—the gossip, the temptations, the separations, the nervous tensions—that will beset them. But to sustain them they will have their love of home and children and each other. They will have, too, all the dear customs and traditions born of their eight years of marriage and the long courtship which went before. Traditions like New Year’s Eve, for instance.

It’s good to be able to think that this New Year’s Eve they’ll be together again, that though the fun be at its height on the first stroke of twelve Frank, as always, will seek his wife’s side, kiss her tenderly and say—more solemnly perhaps than ever before, “Happy New Year, Nancy!”