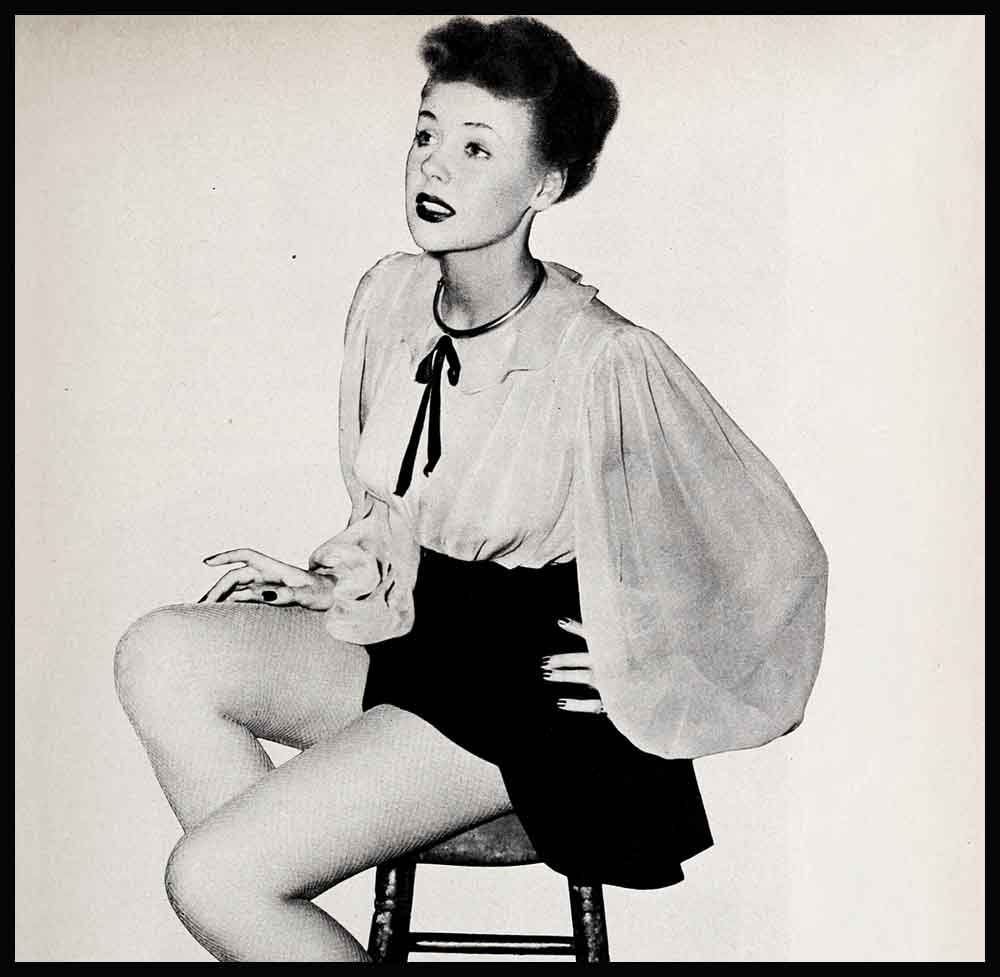 I Learned About Men

Now, for three months I, Marie McDonald, have been Mrs. Harry Karl. I love this guy who has given me his name. What’s more I completely respect and admire him. I’m a lucky girl.

But my having insight enough to appreciate a quiet guy like Harry wasn’t any accident. Cora Marie Frye’s being a model at the age of ten had a lot to do with it. Her stepdad being in the night-club business when she was twelve had more to do with it. And Marie McDonald’s being tagged “The Body” was the topper.

I learned about men from all that. And not at all in the way you think.

I started dancing around to phonograph music when I was four. My parents were divorced when I was six and Mother and I moved from Kentucky, where I made my earthly debut, to Westchester, New York, where my grandparents lived. Their names were—get this—McDonald.

I was an only child and somehow I skipped ever being a “little girl.” I grew up entirely surrounded by adults and I felt silly with kids my own age. By the time I was ten I was a model. People patted me on the top of my dark head and told me I was cute. Me—all I thought of modeling was that it was hard work, standing still that long. And it was. Watching the older girls, I knew I wasn’t going to be a model when I grew up I wanted more than trailing around showrooms every day, smiling at a new set of visiting buyers every afternoon, coming in mornings with rings of weariness under the eyes.

I didn’t know what I wanted until two years later when my mother remarried. Then I yearned for happiness just like hers. She married a man of Italian descent, who is one of the sweetest humans on earth.

Last year, for the first time, I was personally able to contribute to their happiness in a big way. I bought them a house on a little ranch in the San Fernando Valley. Daddy has a vineyard and makes his own wine. Mother has a garden and every night before dinner she goes out and picks fresh vegetables and lettuce. In the mornings, when she discovers some of her home-grown berries for the breakfast tray, she beams as though they were diamonds.

Daddy’s night clubs were not the big gaudy affairs that make millions, but they were typical enough. I saw them from the inside—I could almost say the underside. Nobody had to tell me not to drink after I observed what dopes drinking made of people. When I saw old men out with very young girls and old ladies out with young boys, I didn’t want any of that either. I wanted a real marriage, like my mother now had, with a real home and children.

So I fell in love, like mad, with my first love. I was thirteen by then. He was a lordly twenty-one. I watched him for two years at church at the Lutheran debates. He didn’t notice me at all.

One day I got into my bathing suit and entered a beauty contest. I was fifteen and I emerged the winner, “Miss New York State.” George White, the producer of the famous “Scandals,” was one of the judges. He asked me if I’d like to go into the “Scandals.” I still wanted Jimmy, my debating boy friend, but as he wasn’t giving me a tumble I thought a career the next best thing. Mother let me do w hat I wanted. I’m not sure now that w as so wise, for by entering “The Scandals” I threw over a scholarship to Columbia University which I had earned.

“The Scandals” didn’t run too long. When it folded on Broadway, it went on a tour of the movie houses. I went along with it, rooming with a girl named Axie.

She was a darling and she is still one of my best friends. Axie was all ambition. She tried to push me into studying diction and practicing dancing. She said she was going to be a big star. I said what I wanted w as to marry Jimmy.

So what happened? Axie met Ben Blue, the comedian, and married him. They’ve got a beautiful home n the Valley now, and two lovely children. And until now I’ve had the career.

Jimmy? Oh, I finally did catch him, when I was sixteen. Having caught him, I threw him back, for he wouldn’t let me be myself. He wanted me to act what so many men think all chorus girls are—dumb. Take my word for it. No chorus girl who stays in a big show is dumb. She can’t be and last.

I was hurt and I was bored. I said, “I would like to be a movie actress.” So I came West and I got more gates slammed in my face than I knew existed.

I was bunking with two other girls in a dreary “court” apartment of two rooms—a bedroom with twin beds and a living room furnished with a three-piece “suite.” I slept on the lumpy divan because I was paying the least rent.

If you’ve ever been down to your small change, you know how it is—if you are a girl. Glow with prosperity and the lads make with the dinner dates. But really need to eat and they know it and you have to play cagey and eat fast—and run faster after the check has been paid.

But the pay-off came for me one night when I was invited to a cocktail party that Garwood Van, James Craig and Jimmy Van Heusen were giving for Tommy Dorsey. While everybody else was drinking, I was stuffing my little old tummy full of hors d’oeuvres. Never before or since has any meal seemed so wonderful to me, and when Tommy had to go to the Palladium, where he was playing, I tagged along with the mob, and sat there, dreamy-eyed and content. I was so relaxed that when Tommy came over to our table during intermission, I started singing.

Tommy said, “Hey, I need a voice like yours. It’s too bad I’ve got a plane chartered for tomorrow. Otherwise I’d audition you. But if you are still available when I get back, I’d like to hear you.

I said, “If I’m still available when you get back, there will be so little of me left you won’t be able to hear me.”

Jimmy Van Heusen got it. “Why not audition the kid tonight when you get through?” he said. So that’s how it happened that at three o’clock in the morning I sang “The Breeze and I” and next day flew out with Tommy as his canary.

I sang sentimental numbers night after night, and I wished the words I was crooning were true for me. I returned to Hollywood, when the tour was over, because I figured my tour would make me known to a few casting directors and it had. I got a chance at Universal.

Then the Hollywood wolves found out about me, and girl, oh, girl! You soon discover you can have seven dates in seven days, but don’t take them seriously. You find out your phone number has been handed around—that you are expected to see and be seen. When you are sweet and sincere, they say, “She’s acting.” When you are tossing a little mood around, they say, “What a witch.”

I remember one guy with whom I got into a political discussion. He nearly died. “Baby, you mustn’t be worrying about these things,” he said. I remember another who was mad when I suggested a quiet little place for dinner and then when we went on to Mocambo, said I was just using him for publicity purposes.

They want to show off your face and figure and have people whistle as you go by and say, “Who’s that lucky dog with Marie McDonald?”

They are lavish spenders, but they are not thoughtful. They are much cattier than women and discuss other girls with you, but they curl up if you so much as mention some other man to them. You start out on a twosome with them, and end up in a mob of their friends. They compel you to concentrate on your career—simply because that’s something that you can rely on.

I found this out when I married Vic Orsatti. I had been brought up to be a> good cook and a fine seamstress. I wanted to run a house and I would have been happy to retire completely. But by this time I was “The Body” under contract to Hunt Stromberg, and Vic didn’t w ant me to become just a wife. He wanted me to be “a name,” to always be in the glamour act. But acting wasn’t what I wanted then. The things we wanted as man and wife weren’t the same and so our love died.

Perhaps it sounds silly when an ex-wife says of an ex-husband that they are still good friends. But we are truly that He’s still my agent and I wouldn’t have any one else guide my career.

Strangely enough, I met Harry Karl through Vic, and Ann Miller, who had been in that first ‘Scandals” show with me. It was just after I got my divorce. Harry was so reserved and kind, so different from the Hollywood run of men, that he appealed to me at once.

Maybe that is because. he has nothing to do with Hollywood—but is in the shoe business. His father launched the Karl Shoe Stores which run from Seattle to New Mexico. Harry took over the business when he came out of college.

Harry was like the Standard male, and thought all any Hollywood girl wanted to do w as go out dancing. But when he discovered I cared less than nothing for it, he was happy as a kid. We had parties at my home or his. We went grunion hunting at the beach or cooked wienies with a crowd. We discovered a mutual love of pool and billiards.

Harry and I have worked out a live-and-let-live policy for ourselves. He has his work and he feels it is all right for me to have mine—but his work hasn’t the crazy hours of the movie business and I shall see to it that my career doesn’t cut up my time after five p.m.

For by now, you see, I’ve got the habit of acting. By now I am ambitious. Harry is so sweet. Many a night he sits beside me while I run off old films—the “greats” of the past—like Garbo, from whom every actress can learn so much.

But you see how lucky I’ve been, don’t you? Modeling clothes at ten got me over any wish to be an adult clothes horse. Seeing how night clubs work at twelve made me know the workings of the “mad, mad whirl.” Having a hundred dates in that many nights made me know how wonderful it is to have one steady date in your own home with the man to whom you’re married. And that steady date I want to keep forever and always.