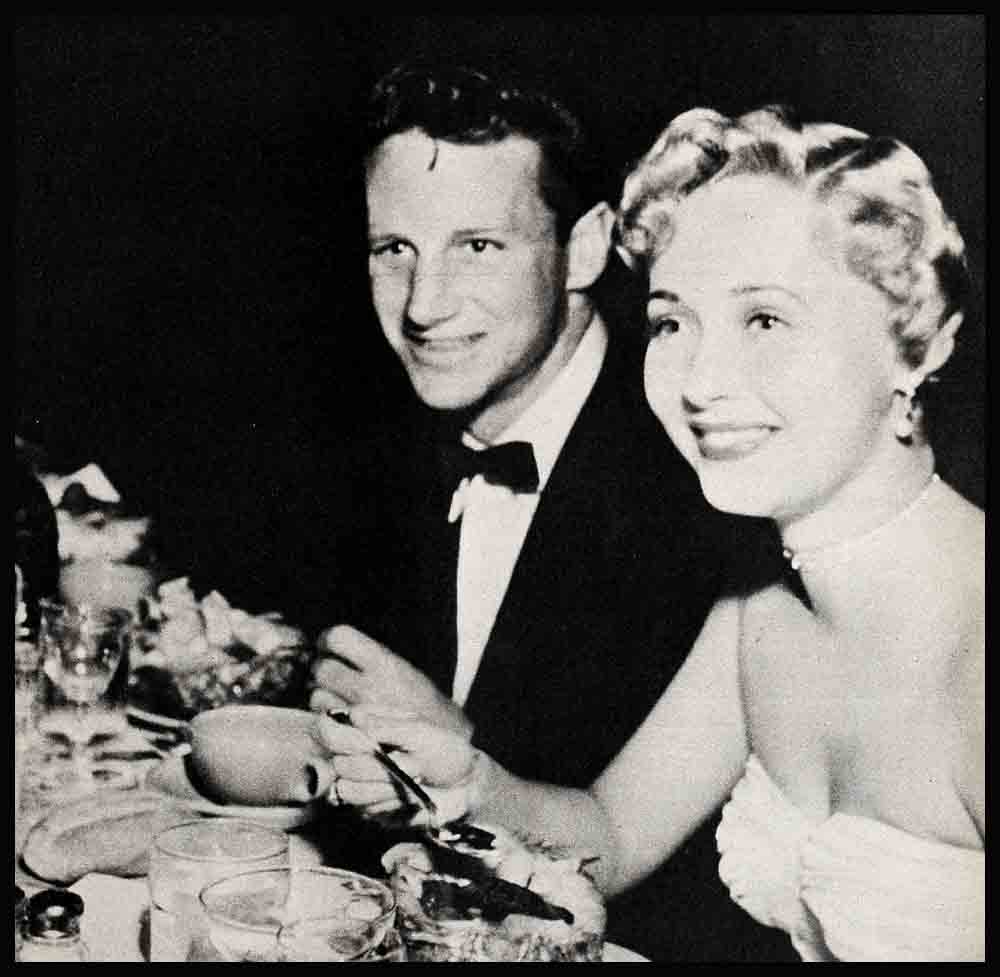 Marriage At The Crossroads

For as long as they’ve been married—ever since November 5, 1949—Jane Powell and Geary Steffen have stood together, their marriage clear and strong as a beacon light in a town where marriages are more often than not apt to suggest suggest stormy, turbulent seas.

So when word of a rift between them was heard, even shockproof Hollywood was shocked.“This,” cried the cynics, “just simply can’t be!” “This,” shouted the dreamers, “is a very bad joke that somebody has dreamed up.” And Jane and Geary, themselves, said only that, yes, there was a little trouble, but that that they were sure with time and patience they could work things out.

Rumor has it that Geary’s jealousy has been at the bottom of their difficulties. And people who worked with Jane and Gene Nelson during the shooting of “Three Sailors and a Girl” say that this jealousy may not be entirely unfounded.

The facts in the case are these: Jane went to work at Warners on loanout from M-G-M only a few short weeks after the birth of her second baby, Suzanne Ilene. In her new picture, “Three Sailors and a Girl,” she was working for the first time with Gene Nelson. Shortly after the completion of the movie, Jane and her husband Geary shocked Hollywood with the admission that everything was not well with their marriage, but they were trying to work out their problems. The next week Jane and Geary appeared together in Hollywood, and when Geary embarked on a new business venture—selling small English cars, in addition to his regular insurance business—Jane was one of his first customers. But only ten days later, as Jane was leaving Hollywood for night-club engagements in Toronto and Las Vegas, she admitted that on her return in six weeks she would most likely file for divorce from Geary.

There are, however, other facts bearing on the case which are vitally important to it. In the meantime, Gene Nelson and his wife Miriam had separated and Miriam had gone to New York. Gene was booked for night-club engagements in Toronto and Las Vegas—and it seemed more than coincidence that Gene would be in each city at the same time Jane was there.

When Jane and Gene started work together, insiders say, it was one of those things that wasn’t planned or expected; the singer and the dancer simply discovered that they liked each other very much.

It was, perhaps, only a coincidence that thereafter when Jane and Geary were seen arguing in public, Gene was usually in the background. At that time, however, Jane and Geary denied that they were having any serious trouble; particularly that Gene might be connected with it. “We even invited Gene out after his wife left him,” Geary said. “He wasn’t too happy.” And Hollywood insiders, wanting to believe that everything was all right with Jane and Geary, asked no further questions.

But there were those rumors that Jane and Gene were spending an astonishing amount of time rehearsing a couple of very torrid dance routines for their picture.

Miriam Nelson, making no statement as to the cause of the trouble in her own household, declared that any chance for a reconciliation seemed remote. She retained a lawyer, saying that she had not yet decided whether to ask for a divorce or for a legal separation. And when Gene tried to call her in New York she was unavailable.

Jane and Geary were vacationing at the Racquet Club in Palm Springs one week- end when the first hint of open trouble came. When Jane returned to Hollywood, she told columnists that she and her husband had argued but that maybe they could “iron everything out”—which is one way of saying in Hollywood that they might come to a real reconciliation, before it was too late. Two evenings later they appeared together at a cocktail party, before most people even realized they had separated. Even those who knew of the rift were loathe to admit that another “perfect marriage” had hit the rocks. The marriage of Jane and Geary, with their years together, and their two lovely children, really stood for something solid in the eyes of most of Hollywood.

Thus it was that Jane’s statement that she expected to file for divorce came as a shocking disappointment to movie-town. But the disagreements between Jane and Geary outweighed everything else, and as Jane left for her own night-club engagements which would keep her away from movie- town for six weeks, she said that on her return she would probably file for divorce from her young husband. Even before she issued her statement insiders were speculating that she might file for divorce in Las Vegas. This Jane denied. She admitted, too, that there was a remote possibility of making up with Geary; if her feelings had changed by the time she came back, Jane said, she and Geary would attempt to patch up their marriage.

Geary has issued no recent statement, but there is no doubt that he has tried desperately to save his marriage, that he would like to give it another try. At first he had planned to accompany Jane on her trip to Toronto and Las Vegas, but these plans changed with Jane’s announcement that she might file for divorce.

How the marital breakups will affect the careers of both Jane and Gene is still a question. Gene is now free from his Warner Brothers contract and has had nightclub offers and offers from other movie studios in Hollywood.

As for Jane, the problem is somewhat different. Although she has been married four years and is the mother of two children, she has faced difficulty in finding mature roles on the screen. Moviegoers, like Hollywood, have always pointed with pride to her marriage as one of the most solid in Hollywood. She has often been cited as an outstanding example of a happy young marriage—and most of Hollywood still hopes that somehow she and Geary will again find their way together, for the sake of the children as well as for their own happiness.