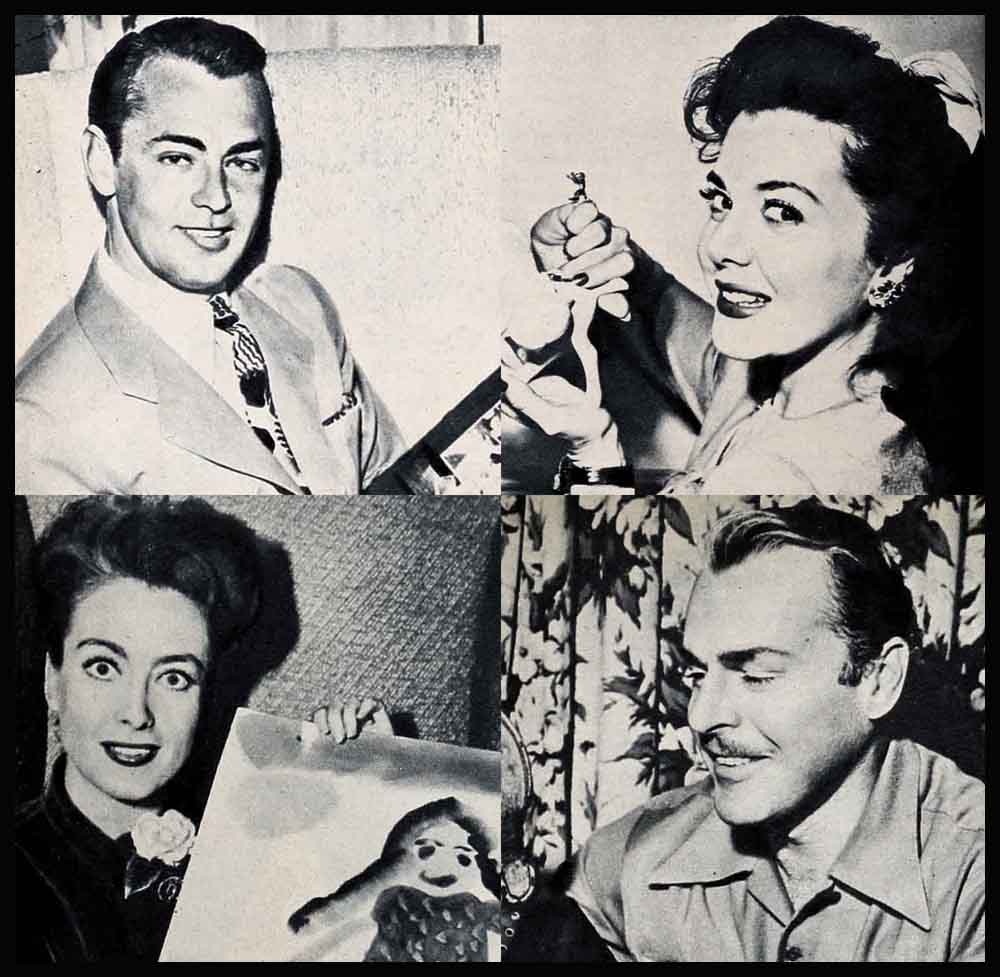 Alan Ladd says: “What I most cherish is the scrapbook my grandmother made for me when I was five. One day as I passed one of those houses with basement windows that open on the Street level a bullying kid, aged about ten, reached out, grabbed my ankle and threw me so hard that I broke my leg. That meant weeks in bed and, always having been active, I wasn’t a very good patient until Grandma thought of the scrapbook. She pasted the most wonderful pictures in it—photos of beautiful girls, views of seagoing yachts and race horses, photos of me and my other small-fry friends. Then we made up stories to go with all the pictures. My convalescence passed by magically after that and I kept making up stories around that book throughout my childhood. I still love the scrapbook for the memory of a wonderful lady who, through it, gave the first wings to my imagination.

Ann Rutherford says: “The monkey thumbing his nose on my right hand led to the white horse with boxing gloves on my left, and thereby hangs my love story. When I was six, I got angry over a silly slight and my grandmother gave me the monkey. ‘This is the way you feel,’ she said, ‘but if you act as you feel, you’ll be just as silly as the monkey. Remember, things will get you angry all your life, but if you use anger constructively you can tum the things that go against you into good things.’ I’ve kept that monkey ever since. And I try never to act like him no matter how I feel. When David May came along, he sent me the white horse saying, kiddingly, that he was my knight on a white charger. Later, after we were married, he sent me the boxing gloves and whenever we have even the mildest tiff, we put flowers in the boxing gloves and laugh away our troubles.”

Brian Donlevy says: “My finest keepsake is a pair of shoes, the first I ever had, as a kid in Ireland. They were hand-made, of the best local leather, with iron-bound tips put on by the blacksmith. And I was told by my mother that if I’d be good in them I’d climb to the heights. They were heavy and clumsy and no modern American kid, including mine, would wear such footwear, but I’m superstitious about them and wouldn’t part with them for anything. I’m so silly about them that. I personally polish them and shine up their iron tips. I think if I ever lost them, I would lose my luck and where would a Mick be without his luck, I ask you?”

Roddy McDowall says: “One night during the ginning of the blitz on London while my mother, my sister I were huddling fearfully under the stairs, we heard the t-a-tat-tat of falling shrapnel and saw the glow that meant piece had hit close to us. When the all-clear sounded we out, afraid we’d find our house on fire. By a miracle wasn’t. The pieces of shrapnel I’m holding had caught onto curtain but somehow had not ignited it. Mother made me them to Hollywood as a reminder that the war is not her, and that I must buy Bonds, conserve and in every way all a fellow my age can to help toward bringing peace.”

Joan Crawford says: “My daughter Christina, then aged four, gave me a work of art which I love more than any thing, though it’s hardly art in the sense that she intended it. But I’ll always treasure it because it was a gift in which truly it was the thought that counted. I had adopted a baby’ boy, Christopher, as her companion and after having him nearly a year, his own people wanted him back again. I’d grown to love him so that I was devastated by the blow. ’Tina wanted to stop my tears and so she produced this somewhat amazing water color as her labor of love, bless her.”