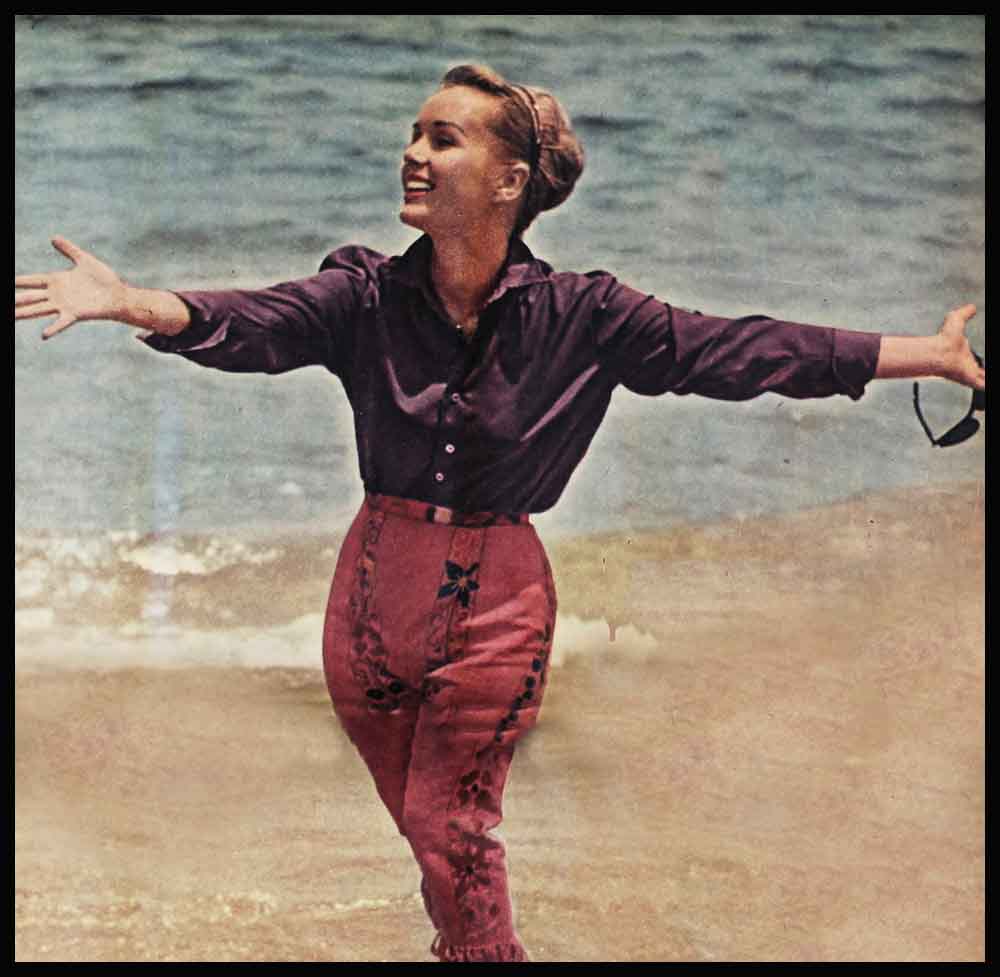 When Should A Married Woman Date?

I guess I’m old-fashioned. I cant help it. I was brought up that way. Although I have been in a divorce court myself, I still don’t believe in divorce. And I don’t believe in married women dating. That is why this has to be the shortest story on record. When should a married woman date? My answer is never!

To me, there is no such thing as a socalled innocent date for a married woman. Of course, I exclude a business lunch with your agent or your income tax man—or an interviewer.

But a dinner date or a party date, the so-called harmless dates when your husband is out of town—never. I don’t believe there can he such a thing.

And my husband Harry feels the same way I do.

“Harry,” I said. “why don’t you call up—? Ask her out to dinner. I know she’s very lonesome. I think it would cheer both of you to go out to Chasen’s and see people.”

I was referring to one of my best girlfriends who was in Hollywood. She was separated from her husband and, I knew, miserable. She is also very attractive.

But that didn’t enter my mind. She was a friend I trusted dearly. The same as I trust Harry.

Soon I found myself pleading with Harry to date my friend. He not only refused but he refused firmly.

Then I thought, how can I argue with him? He thinks exactly as I do. We dropped it right then and there—and I know I’ll never ask him again. Happy that I don’t have to.

Maybe in this sophisticated world of show business, Harry and I sound old-fashioned for even thinking this way.

Maybe we are—and maybe that is why we fell in love.

Harry and I have careers in different worlds—show business and shoe business. He runs more than three hundred shoe Stores in fifteen western States. all movies are not made in Hollywood. There are times when we are separated. I suppose no one could validly criticize us if we had dinner dates with old friends, mutual friends.

But we never do.

When Harry is out of town on business, I devote my time to the children and the Thalians. If I have to go out—for any reason—I make sure—absolutely sure—that I go out with a crowd—my friends and Harry’s friends.

Both Harry and I are fairly well-known around Hollywood. If either of us had a dinner date with an old friend in a public restaurant, what’s to stop an aggressive press agent for the restaurant—not meaning any harm—from using the dinner twosome as a means of getting his cafe mentioned in the gossip columns? Most columnists I know would check me immediately before using such an item—but there are always a few who won’t.

How a marriage ends

Harry and I are both wise to the ways of Hollywood publicity. I don’t think—in fact, I know—nothing like that would cause a stir in our home.

But both Harry and I know many a Hollywood couple now divorced whose marriage started slipping from the moment of the first gossip item.

How many of you divorcees reading this can remember what first caused your marriage to disintegrate? Was it a chance re-mark from a bridge partner? Or a catty dig from some scheming woman?

If delivered with the right inflection of voice, just the hare fact that your husband picked up the local beauty at the station, gave her a ride home and dropped her at her own curbside can sound scandalous.

Divorce is as prevalent in the suburbs and small towns as it is in Hollywood. The only difference is that our troubles get worldwide headlines—yours little more than bridge table circulation.

But the rules of behavior are the same.

The so-called innocent dates can be rationalized and justified with volumes of words and logical explanations.

Even saints have been plagued with temptations. Temptation, in all forms, is part of normal living.

But giving in to it is another thing.

Much of my mail comes from young girls—some married. some not—who ask me how to resist temptation, especially in the form of an especially attractive man.

I have a stock answer—although I don’t consider myself the new Dorothy Dix in any way. I say the best way to avoid temptation is to keep away from the places where you know it’s sure to be found.

Theologians put it another way: To avoid sin, avoid the occasions of sin.

I’ve always been grateful that I had strong religious training in my childhood. I think it’s the one shield, the one buffer against the so-called Hollywood life.

Maybe that is why my husband and my children come first with me—then my career. When my career starts getting in the way of the real things in life, then I hope I have the integrity to re-examine myself.

Drinking is a way of life for some people in Hollywood—as it is in most cities and towns all over the world.

I don’t drink. Not that I am against anyone else’s opinion or different thinking, but I feel I have enough exuberance without it.

Most married women I know do drink. Without meaning to sound like a temperance lecturer, I say any married woman who does drink is asking for trouble if she dates men other than her husband, no matter how innocent her intentions. Alcohol lowers inhibitions. A woman who drinks on a dinner date with another man can ruin her whole life in one night. I’m not saying this happens every time. Fortunately, it happens rarely, because most wives become extra cautious of alcohol in such situations.

Well, as I read this over I see it is not the shortest story on record after all.

—as told to JIM BACON