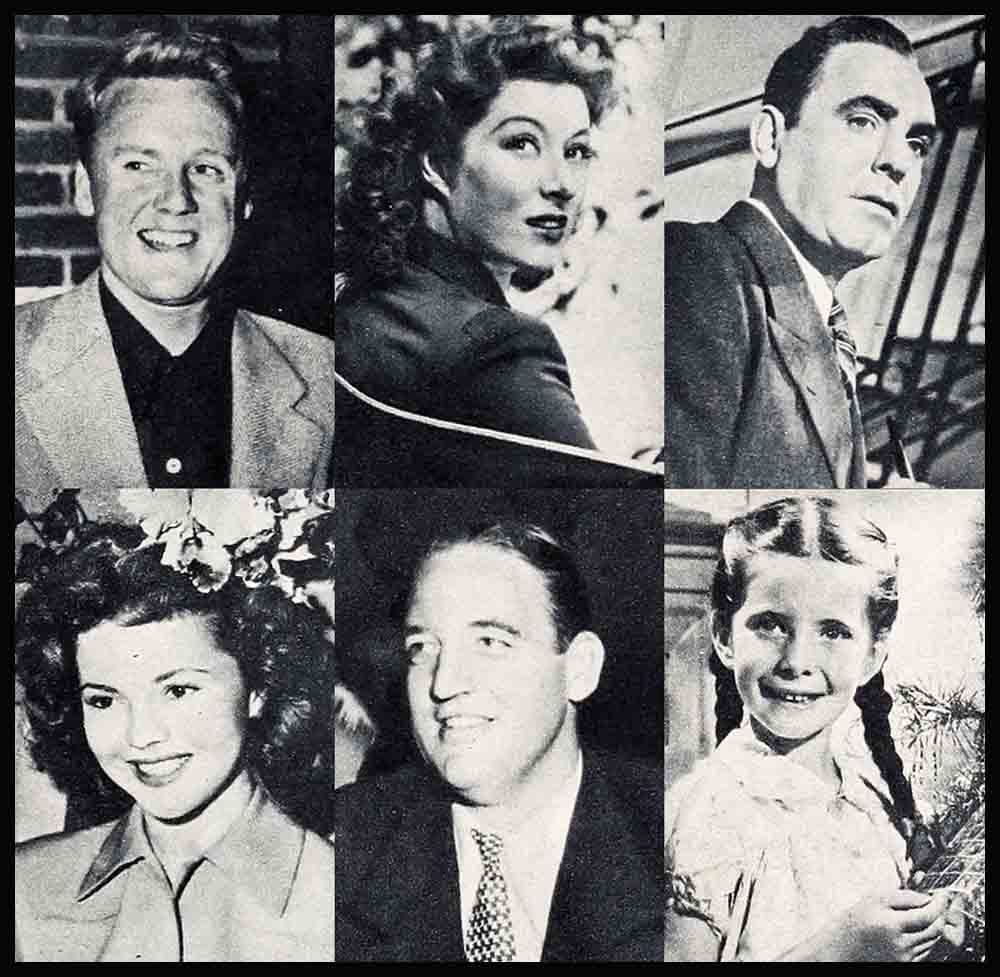 What I Want For Christmas

When I recovered from that auto accident fifteen months ago I told myself that I’d had my share of good luck for a while—so, as far as I’m concerned, there’s nothing I want for Christmas, for I have everything that matters—good health, a good job and good friends.

Of course I haven’t, as yet, the one perfect girl—the wife who would make my bachelor house a home—but girls like that don’t come on Christmas trees.

My Christmas wishes this year are for other people. For Dr. William Branch, the great guy who saved my life when I was smashed up, I’d wish for that vacation he’s always talking about but never getting.

I’d like my dad to have a shiny new station wagon with white-wall tires and lots of chrome. I know it’s impossible until the war ends.

While I’m wishing, I’ll wish that my pal Keenan Wynn will get his Christmas wish—which is a chance to direct a motion picture.

And that’s all, brother.

My Christmas wish is one I know is echoed in the hearts of millions of other women—it is that my husband who is far away fighting—fighting with those millions of other longed-for men so that this world will not turn back into barbarism and darkness—will be home with me again, safe and well.

I wish I could hope to have Richard home this Christmas, but as a naval lieutenant aboard a U. S. destroyer in the Pacific, he will not be back, I know, until the Japanese, as well as the Germans, have been beaten.

This Christmas I shall have to be content with a Christmas letter from “somewhere in the Pacific,” but it will be better than any other gift I could ask for if he tells me he loves me, aches to be home and is taking care of himself so that he can come back unharmed, and soon.

If there weren’t a war on, with the boys praying to get it over fast and come home—and their families praying for their safe return—

If it weren’t necessary to plunk every possible dollar, and even the impossible ones, into War Bonds—

Well, if then, we could permit ourselves to dream a little about less vital and more foolish things, I believe the thing I’d like for Christmas is a new meeting place for my Irish club.

I’d want it to be a big room, sound-proof and air-conditioned to whip out the cigar smoke. I’d like it rock-bottom comfort, with old easy chairs and a raft of tables everyone could put their feet on—and a good old gay-patterned rug that wouldn’t show the cigar ashes. The ash trays, by the by, would have to be the two-foot-diameter variety—and plenty of ’em. And what a loaf it would be to have some push buttons handy for service—and a private phone just in case the meeting lasted too long and someone had to phone the little woman.

But why all this foolishness when we’ve got V-Day to ring up first? I’m putting this old wish-pipe out and waiting for another Christmas.

I was surprised when my brother Jack, who is in the Army Air Corps, and my other brother George, who is in the Marine Air Corps, wrote that they didn’t want anything—not things anyway—for Christmas. All they wanted was a promise from me.

“Shirl,” they said, “it would be a good Christmas for us if we knew that you planned to finish high school.” They said they knew how hard it is to stick lo one’s studies when. so many apparently more important things are going on. They knew it was a temptation for teen-agers to quit school altogether and take a job—a war job—to get it finished faster. They said that was one of the things the boys were fighting for. They were fighting so that our lives would not have to be disrupted. The grown-ups, they said, can handle the war.

I guess the thing that I would like most for Christmas is that laughter and fun would come back for all of us. It seems to me that in wartime so many people are worried about their sons and hushands and sweethearts, and that there isn’t the same free feeling we used to have. And I guess there won’t be until we are at peace. It is not that my friends and I don’t have lots of fun. We do. But we all have the feeling that we have no right to enjoy ourselves thoroughly. I hope that when my little nephew Stanley reaches his sixteenth Christmas, he will not be looking forward to fighting another war.

If I were writing a letter lo Santa Claus it would go something like this:

As one large man to another—surely you know what I mean when I say the only thing I want out of your pack is a new kind of screen role. Okay, I am not exactly a small guy. Neither are you. But do I have to be a mysterious and sinister oversized guy, year after year?

I know. You’re typed, too. But nobody hates a jolly fat man, especially when he’s so free and easy with the presents. But my kind! Little kids whimper when they pass me in the streets.

You’ve probably forgotten, Santa, but I used to he a comedian. Then somebody found out I had a pretty nasty leer in stock. I should have kept it a secret. I’m trapped now. Nothing can save me but a miracle, or a word from you, dear Santa, to the headman at my studio.

Put in a word for me, friend, and I won’t even ask you for those extra red ration points I really need to keep up my strength.

I know exactly what I want for Christmas, and I’m afraid it’s quite a lot. I hope Santa Claus hasn’t put all his money into War Bonds, for I want a fur coat, a pin with rubies and diamonds in it and a soft quilted satin robe with high-heeled mules to match, and . . . and lots more.

I guess I shouldn’t be so greedy.

But, you see, it isn’t for myself I want all these expensive things. Christmas Eve is my mother’s birthday and we always have a wonderful party around the tree. First Mama opens her birthday presents and then I open my Christmas presents. And we have a fire in the fireplace and most of the regular lights turned off so the tree can sparkle and I get to stay up very late—almost till ten o’clock—and it is so exciting!

My mother is so wonderful—I love her so much and I can’t buy very much that’s good enough for her with my dollar a week allowance and, gee, if Santa Claus would only arrange things so I could give her everything she wants, it would be a really wonderful Christmas.

Of course in case there is anything left over for me I would love to have a cuddly teddy bear, or a monkey, or maybe even a panda. I think pandas are cuter than any old doll. But I can save up for a panda if only Santa will help me get that fur coat.