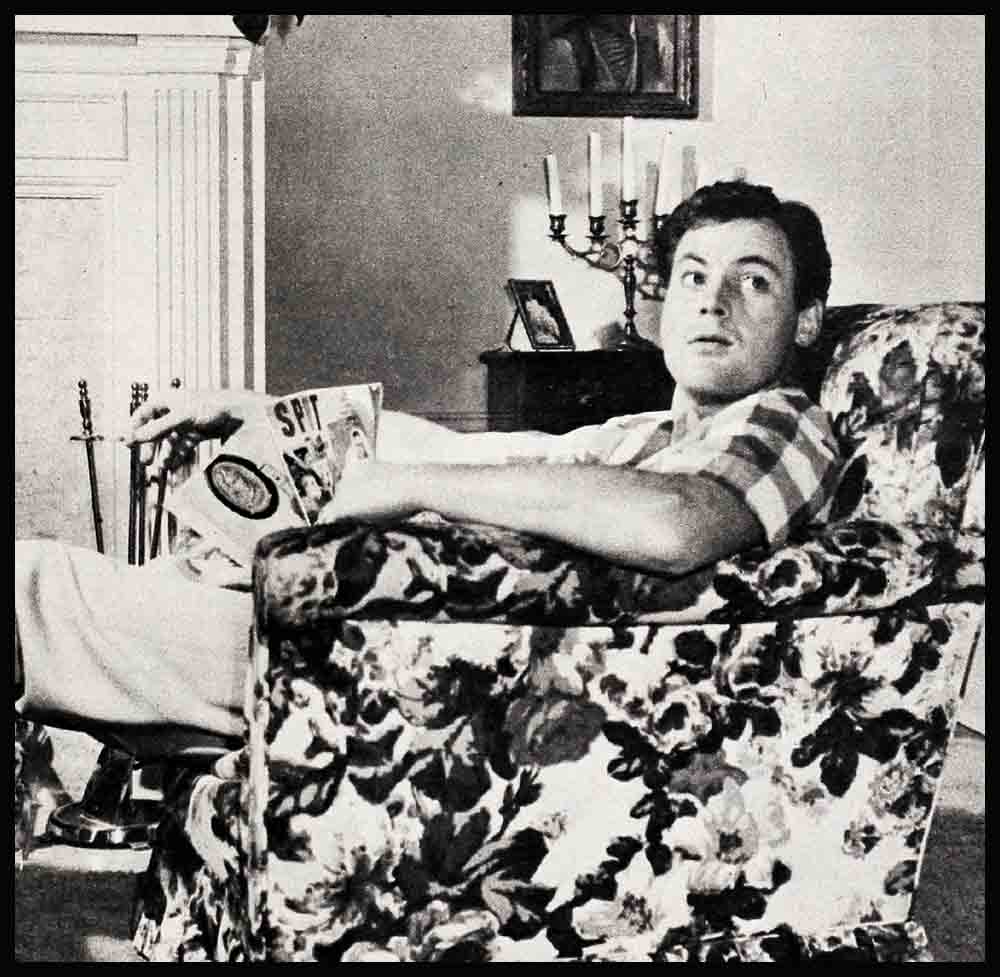 It is astounding to me that John Agar’s private life seems so unhappy and confused at a time when his career is hitting on high. This is not the way things normally go in Hollywood. Usually it’s when a career is going badly that our boys and girls become mixed up and make mistakes they are sorry for later.

Admitting that John was completely cut-up at the time of his divorce from Shirley Temple, still—almost eighteen months have rolled by since then. But, although young, well liked and successful, he has not snapped out of whatever is depressing him.

Frequently, he is seen “stag” at the various night clubs, seeking a table in the background and just watching the people of his own age having fun dining and dancing. Even when he dates a pretty girl he seems preoccupied and not really interested.

Also, it is not unusual for Beverly Hills stay-up-lates to spot young Agar driving his car along the deserted streets until the wee small hours of the morning—alone.

Twice his name has made the news columns—when he was arrested on a drunk driving charge.

I’ve always felt a lot of sympathy in my heart for these young people of our profession who seem to be getting tangled up emotionally and so I was glad of the chance to talk with John when Photoplay asked me to do a story on him.

John today is wary of reporters. He says little and suspiciously considers every question put to him before replying. He is constantly on guard—on the defensive—even a little defiant.

“John,” I said, suddenly, “are you unhappy or worried about something?”

I think the direct approach surprised him. He attempts to keep his face deadpan but my question must have hit home. He flushed slightly and his chin set stubbornly under his tanned skin.

His voice was quite steady, almost disinterested as he replied, “No, I’m all right. I’m trying to work out my life. At least my career is going very well. You know, I’ve made eight pictures and I’m still under contract to David Selznick.”

Obviously, he had made a neat switch from a personal subject to his career.

But Parsons is not that easily sidetracked. Before he could get completely away irom the personal, I asked, “Do you bear any bitterness toward Shirley?”

“No, I have no bitterness,” he answered, carefully. “Life is too short to harbor grudges and I wish only happiness for Shirley in her new marriage. After all, you only get out of life what you put into it. Maybe I didn’t put enough into my marriage to Shirley.”

And that was about the extent of his philosophizing. I asked him if he thought that Shirley, who had been only seventeen when they were married, was too young to appreciate the responsibilities of married life (A Beverly Hills psychiatrist has recently said that teen-age stars are too young to accept the mature responsibilities of marriage and that is why so many of their unions fail. He had also said that teenagers marry to seek independence and freedom from parental control. He argued that seventeen is too young to marry.)

“Do you agree with what he says, John?” I asked.

“I can’t say that I do,” he replied calmly, “I don’t know. My marriage to Shirley Temple belongs to yesterday and I am forgetting it. 1 don’t want to discuss it,” he signed off—and I mean, signed off.

It was obvious John had a chip on his shoulder and was reluctant to trust anyone. He’d arrived an hour late for our appointment saying he had had an accident with his car. And he was politely full of apologies. But I doubted the accident angle. I wondered if he had not been hesitating about coming to my house at all.

“You just told me that you are deeply and sincerely interested in your screen work, John,” I went on. “What about those drunk-driving charges? Those aren’t going to help your career.”

“I was not drunk and I have witnesses to prove it. I am going to fight this in every court in the country if necessary!”

Suddenly, I realized I had put my finger on what is hurting and tearing at this boy. I believe he feels the world is against him There must be so much bottled up inside him which he feels he cannot bring out in his own defense. He must have been deeply hurt at Shirley’s divorce charges. They were unusually strong for a divorce suit even in Hollywood. He made no attempt to state a “side” of his own.

But what he does not seem to realize is that his silence won him much admiration from people who might otherwise have been prone to criticize him.

If I had been a little angered by his attitude when he first arrived, I found myself feeling much more sympathetic. John had not been brought up in a theatrical world. He has had no previous experience in “taking” the goldfish existence and the hard jolts that usually go with fame.

“Do you ever wish that you had gone back to Chicago and taken over the plant your grandfather built?” I asked.

John shook his head. “My father died in 1935 and we sold the meat packing business because there was no one to carry on. I am the oldest of three children. My mother wanted to come to California and, as the head of the house, I was expected to come with her My sister is married and still lives in Chicago. My brother is in Stanford. But we’ve never regretted coming to the Coast to make our home.”

John seems so very fond of all his “people.” His mother, to whom I have talked on several occasions, seems to be a charming woman and I am sure her advice to this boy who seems so hurt by life, is excellent.

John went on to tell me that several years after they moved here, he went into the Air Corps. In fact, he was in the Service when he married Shirley.

“Shirl was only fifteen when I first met her,” he reminisced. “We were married two years later, in 1945.”

There was a nice, gentle smile on his lace—so different from his flare-up when Shirley had been mentioned before.

“How old were you?” I asked. “What difference was there in your ages?”

“I’m thirty now. My birthday is January 31st and my baby’s is the day before, January 30th.”

This was the first time he had mentioned Linda Sue. I had heard that he does not visit her often.

He tightened up again.

“Later I’ll see her a lot—when she is older. Make no mistake—I’ll never let her forget that I am her father.

“She’ll be proud of me,” he said huskily, “I’m going to make sure of that—both as a man and as an actor. As I see my future now—it is to work, work, work. And, in time, in a few years, I will have gained the polish and finesse that comes with experience.”

Was it Shirley who had influenced him to become an actor? I asked him.

He said, “Shirley had nothing to do with it. David Selznick signed me because (I hope) he thought I had possibilities. First, I went to dramatic school. Then I got my first real job in ‘Fort Apache’ with John Ford.”

Since that time John has made seven pictures. (His latest is “Along the Great Divide.”) Careerwise, he’s really doing all right.

But inside—this boy has got to get himself straightened out. This may not come until he meets another girl he can love—to whose understanding his very sensitive personality can respond.

“I can’t answer that”—there was that old stock phrase back again! “I have no plans. I am happy living with my mother. My career and Linda Sue are the important things in my future.”

I’m not sure about that. I think the most important thing in John’s future— is John.

Before we can conquer the world for whatever noble cause, we must first conquer ourselves. We must learn that our experiences should bring us understanding, not bitterness. We must not feel that the world is against us—that is destructive.

So, I would like to see John let down his guard—hold out his hand again to life. I think he would be surprised at the warm answering pressure.