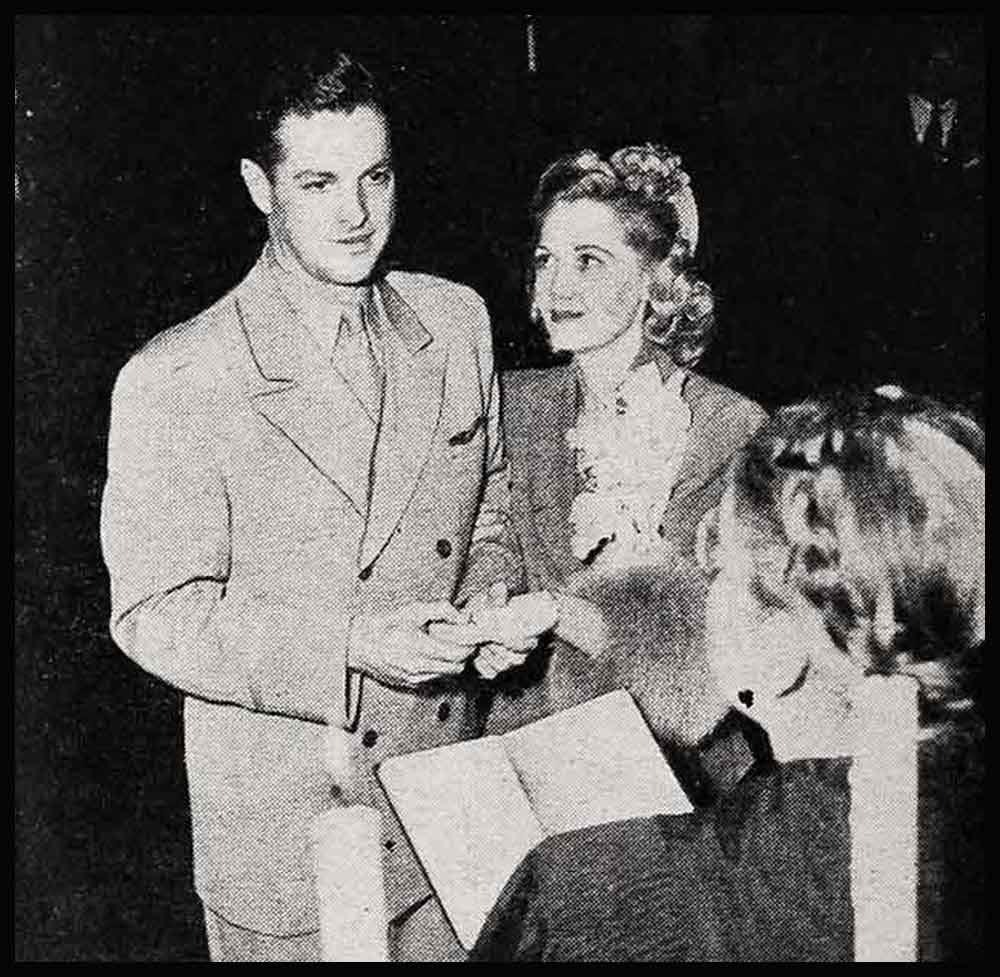 Wedding In The Rain

Outside the rain made a steady accompaniment to the organ music issuing from the chapel. Within, the candlelight flickered on the walls where hung the wings of America’s great fliers—Jimmy Doolittle, Amelia Earhart, Colin Kelly, General Arnold—and came to rest on the wings of another flier as he stood reverently before the altar, holding the hand of the girl beside him. It was the historic St. Francis fliers’ chapel in Riverside, California, where Bob Cummings was now about to take Mary Elliott as his wedded wife.

Five months of events had preceded this hour, events at once as casual and as momentous as such things can be. They began one day when Paul Hesse, Photoplay’s own cover photographer, drove up to the San Fernando Valley home of Robert Cummings. Bob, who gave up his career as a movie star to offer his Services to the Army Air Force, had just returned for the day and was chatting with a few friends when Paul strolled over with a beautiful blonde in tow.

Bob gave the girl a quick double-take, then the talk veered off into general channels. Presently Bob gathered up the girl who had been with him before Paul arrived and the whole party drove into Hollywood for cocktails. But the double-take had not been for naught. Bob made it a point to engage “Miss Elliott” in conversation.

However, Mary Elliott is a little lass who always leaves other girls’ beaus alone. So she was cordial but not chummy with Bob, and when he asked for a date, she said, reprovingly, “Why, Mr. Cummings, you’re engaged!” This was, of course, news to Bob, who wasn’t engaged, or even going steadily with anyone. But other people joined the conversation about that time, and the whole thing was dropped.

“He says he fell in love with me that very first night,” laughs Mary, “but of course he didn’t, because he didn’t see me again for a whole month.”

Bob’s answer to this is that he was working at Mira Loma Flight Academy, Oxnard California, as flight instructor then and only got into town on Sundays. He had dates ahead for two weeks, but on the third week end, he got in touch with Paul Hesse. “I’d certainly like to see Mary Elliott,” said Bob. “Do you think it can be arranged?”

Paul was giving a party that night for Joan Fontaine, so he invited Bob and then called Mary. “But I have a date!” she protested. “Maybe I could drop by afterwards.” Bob waited patiently until eleven o’clock for Mary to show up, and when she did, she was still with her date!

Bob got in only a few words. He made them count. He said: “May I call you?”

Mary was no sooner home and in bed than the phone rang. It was Bob. He invited her to his house the next afternoon to go swimming. “I love to swim, so I accepted,” Mary teases, “even though I had to break a previous date to do it.”

“Darned good thing I had a swimming pool,” counters Bob.

It was a wonderful afternoon. The sun was golden, and so was their mood. Bob was feeling’ relaxed, happy and hungry. At this delicate moment, Mary stretched deliciously, then remarked, “Well, I must be going now.”

“What do you mean?” Bob demanded. “Aren’t you having dinner with me?”

They had just met, but then and there they almost had a fight. It developed that Bob hadn’t made his point clear. He had invited her to go swimming. Mary had broken one date for the afternoon, but she couldn’t break another for that evening. She didn’t go to dinner with Bob.

It looked like a bad beginning, but it was the last time they were apart. “After that,” says Mary, “I broke all my dates.” They really fell in love one night while they were having dinner at the Villa Nova. As Mary listened to Bob speak of things that were dear to him—ideals, principles, a way of life—she realized that he was a very fine man. Their eyes met. There was a moment suspended in midair. A split second later and they were in love.

Bob is a cautious man. In love, he still didn’t just jump in and think afterwards. Marriage is. a serious business. Now and then he would dream up a fake argument to see if he could get Mary mad. He wanted to see how she would act under any and all circumstances.

“Her disposition isn’t just good,” Bob says. “It’s sensational. I couldn’t get her mad. She’s a wonderfully calm person. If something would come up and I would pretend to go into a rage, she’d just kiss me and say, ‘Now don’t you worry about it, dear. You have too much on your mind as it is. I’ll take care of it.’

“She has given up her career. I wouldn’t take one away from a woman who wanted it. That wouldn’t be fair. But I’ve always hoped to find someone who would rather be my wife than a movie star. I did. It seems to me it’s bad to have two careers in one family. You can’t both be tired, with your nerves frayed. One should be serene and rested, able to cope with and smooth out irritations. Well, Mary doesn’t want a career. She wants three children, and me. I’m a lucky guy, and I know it. As if all that weren’t enough, she’s so beautiful!”

Mary is a stage and screen actress who was signed by M-G-M after playing the leading role in the Detroit Company of “My Sister Eileen.” She has appeared in such pictures as “Thousands Cheer,” “Lost Angel,” “Girl Crazy,” “Here Come The Waves” and was starred in the Academy winning short, “Heavenly Music.” The reason you haven’t been reading reams of publicity about her is because she let her career go hang while she went on two Hollywood Victory Committee tours. She spent eighteen weeks overseas.

Sometimes she entertained four thousand men, at other times, only four. She discovered few entertainers went to the Arctic, so she cancelled a planned Sicilian trip, spent three months in the Arctic Circle. “Sicily was more glamorous because it was a war front,” she explained. “I knew the Victory Committee could get a lot of entertainers to go there. But I wasn’t so sure about this faraway part of the world. I wanted to reach as many of the boys in the Arctic as I could. So I stayed, and made my South Pacific tour later.”

That one statement, given humbly, tells you what kind of a girl Bob Cummings married. Knowing these things about her, Bob knew he had found the right girl. When a man feels that way and the lady agrees, there is sure to be a wedding.

Bob, on leave of absence from the Army Air Force to make the Hal Wallis picture, “You Came Along,” knew every day was precious. The ceremony would have to be on a week end. But Bob is a man of action and the details were arranged.

The small wedding party met at Paul Hesse’s studio for the drive to Riverside. Bob had been saving his gasoline coupons for months to make the trip because he had always wanted to be married at the St. Francis fliers’ chapel at the Mission Inn in Riverside. St. Francis, you recall, is the patron saint of the birds.

Bob’s brother, Oscar Cummings, was best man, and the matron of honor was lovely Patricia Hale of New York. She and Mary lived together when they were Conover models in New York. Paul Hesse gave the bride away. Mary’s mother was not well enough to make the trip from South Carolina. But the truly tender part of the ceremony was that it was performed by Bob’s mother, Reverend Ruth Kraft Cummings, who is an ordained minister.

Bob teased her afterwards, because—inadvertently—she had said, “Do you, John,” instead of “Robert.” “Just who got married?” Bob wanted to know, “John or I?” But when you are marrying your own son, you are entitled to blow a line or two.

Before the ceremony, Mary carefully checked herself over. “Let’s see, now,” she said, “something old . . . here it is—this tiger’s eye locket I pinned to my slip; something new, my outfit! Something borrowed . . . Pat’s diamond cross. Something blue—my outfit’s blue. Well, I guess this marriage will keep, and I guess I’ll have the best husband in the whole world!”

All at once, there was music—a moment of panic. “Are my flowers right?” Then Patricia came down the aisle, followed by Mary on the arm of Paul Hesse.

Everyone congratulated them. Bob signed the bronze wings that will hang on the wall with other famous flyers. People had gathered outside, the news having spread that a movie star was being married.

There was a wedding supper and Bob and Mary left for the briefest of honeymoons at Bob’s house—where they had met. Bob carried her over the threshold. The next morning she made him a breakfast of nut waffles and maple syrup, and the next afternoon there was a big reception for them at Paul Hesse’s studio.

This was the surprise marriage of the year. Mary had been away for eighteen weeks overseas so Hollywood didn’t know too much about her. Looking at her beauty, appraising her charm, everyone went around asking: “Who is she? What’s she like?” You’ve probably asked too.