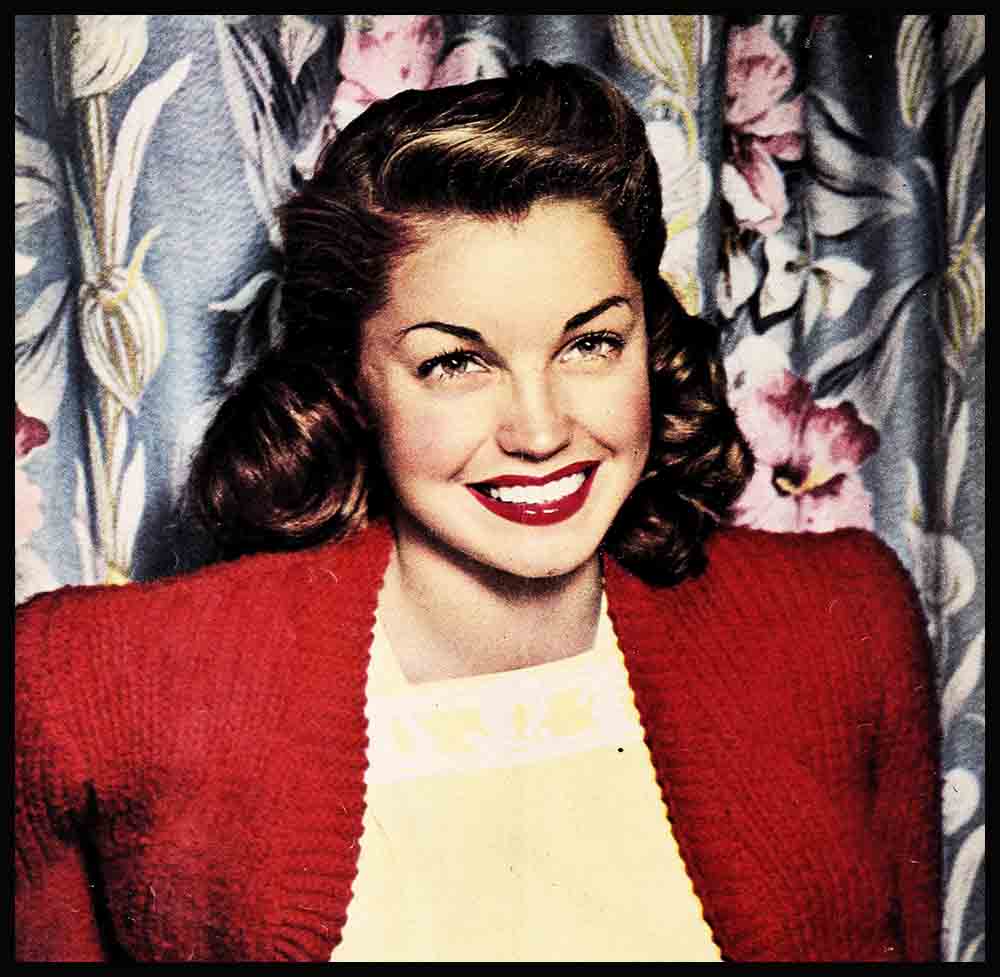 The Essence Of Esther Williams

Your first impression of Esther William is that she is the healthiest female you have ever seen. You give a gander and mental pictures of sailboats, dungarees, flying hair, cold mountain streams, campfires and the like start dancing before your eyes.

This impression, as you may have heard, is not one which you commonly receive in Hollywood. Fake eyelashes, hair which nature had nothing to do with and shapes that have been pounded and squeezed into rigid contours are more the rule in the picture business. All of which may explain why M-G-M did nip-ups to end all nip-ups until Esther was safely under contract.

What does she look like to cause all this furor? Well, she’s tall and so lithe that you search in vain for an extra ounce of—shall we call it “avoirdupois”? She has a swimmer’s broad shoulders, a minute waist, legs that taper the way legs should taper and a magnificent carriage. Plus these details, she has a mop of brown hair with gold lights in it, a skin any cosmetic company would like to claim as its product, brown eyes that actually shine and a grin which lights up all outdoors.

When she first came to Metro, she had not only that healthy look but honest, sane poise about her made you catch your breath “What’s this?” She met people easily. She talked well. She was fun. She laughed at herself and wasn’t too bowled over by the fact that she was about to be a star. And —a refreshing thing—she liked people not because they could do something for her but because she liked them.

She is the same today, even with “Bathing Beauty” chalked up as a solid hit behind her and a glowing career ahead of her.

Strange as it may seem, you can’t tell the story of Esther’s career without telling the story of her marriage, for until recently the two have run hand. in hand. A year and a half before Esther ever entered the M-G-M lot she married Leonard Kovner, not yet through medical school. He had then and still has a brilliant medical future and a passionate adoration for his profession towards which Esther remains humble. She had gone with him for a year before she became a bride.

At the time, she was a star of the Aquacade at the San Francisco Fair, having reached that point by winning more free-style races than there are sticks to shake at them. Only the war prevented her going into the Olympics. She was the sportswriters’ dream: A gal who could not only swim like a feminine Weissmuller but looked terrific while she was doing it. Her picture had been in papers all over the country since she was fourteen, when she had entered and won her first serious competition.

She came from a modest, intelligent family in Los Angeles. Her mother was a power in the city’s government. It had been she, in fact, who put through the recommendation that the kids of Esther’s neighborhood should have a swimming pool, and it was in this pool that her daughter first learned to do an eight-beat crawl. Esther counted towels for the lifeguards; they taught her how to swim—like a man.

So, by the time she reached the Aquacade (where she was starred with the afore-mentioned Weissmuller) America was Williams-conscious. The crowds were enchanted that, due to the fact that there would be no Olympics, she had come to entertain them. The press agents of the show were also enchanted. She was sensational copy.

When the Aquacade closed Esther settled down to being a doctor’s wife. She acquired two spaniels, one named “Angina Pectoris” and the other tagged something even less pronounceable. She dashed about to linen sales, bought second-hand furniture and repainted it, and got most of the paint on her nose. She purchased cook books and discovered that she was rather sharp in the pot-and-pan department. She cleaned and washed and romped with the dogs and chummed with her young husband when he came home at night. And she listened to what he told her about the hospital. She even began to talk like a doctor’s frau. She laughed him out of the blues when an incurably ill patient died. And she gloried with him when he made someone well.

Then came a phone call. It was from a representative of the M-G-M Studios. Could she come and see Mr. Mayer, a voice said. She had been noticed in the Aquacade and they thought she definitely had something for pictures.

Without hesitation, Esther said, “No.”

Then began a series of phone calls which should go down in Hollywood history. Once a month the bell would ring.

“Mr. Mayer would still like to see you,” the voice would say.

“Thank Mr. Mayer,” Esther would reply, “but I don’t want to go into pictures.”

“I’m sorry,” the voice would answer. “I’ll call you next month.”

It did. It called for over six months. Esther and Leonard discussed whether or not she should meet Mr. Mayer. The day came when Esther began to realize that a contract might be a blessing.

“You see I never wished to be a drag on Leonard,” she said. “My hope was that he would feel free to continue his study. He would be different from most young doctors who hurry out of their training in order to support a wife and miss the chance of being really great. I didn’t want him to be worried about me—and I didn’t want to just sit in a house and only be a wife. That makes women dull.”

Well, they talked it over and decided that Esther should see Mr. Mayer.

He asked her what she would like in the way of a contract. She was young but she was smart. So much money, she answered. So much training in acting. Little parts first, to get used to the business. No big splash and then failure, please.

Mr. Mayer yelled, “Done!” and whipped out a contract. That was that.

Since then, Esther has become a star. And once again stardom has exacted its price: The cost of a broken marriage. But this time the reason is a little different.

Naturally, for the past year, with Leonard doing post-graduate work and Esther knocking herself out for M-G-M, schedules were pretty difficult. It got so they even had to make dates with each other. They lived in a little place halfway between the hospital and M-G-M, so that both got a break on gas. Esther got up every morning and made Leonard’s breakfast. She washed the dishes and dashed to work. She ordered food over the phone from the studio and picked it up on the way home. Then, if her husband wasn’t needed at the hospital, she picked him up and drove home. He sat in a big chair reading the baseball scores while she cooked dinner. Because of her enthusiasm for his work, Esther often added to her already overcrowded day by helping him at the hospital, even, on several occasions, working with him in the delivery room.

Meantime the studio discovered from the daily rushes that it had a potential star on its hands in the long, lithe girl who swam like a champ and took direction like a trouper. Esther’s part in the picture was built up. Even the title was changed from “Mr. Co-Ed” to “Bathing Beauty.” Esther was now working desperately hard—week in, week out, even Sundays.

And Leonard was working long hours at the hospital. Both came home completely worn out. There was a night when Leonard brought some friends home, and Esther, good sport that she was, stayed up, entertained the guests and went to the studio for an eight o’clock call without any sleep. No one, no matter how healthy, can stand up under such a schedule.

Both of them were nervous and overtired. They decided that a divorce was the only answer. It wasn’t an easy decision. They’d had four years—for the most part happy. They respected each other.

“It’s a case of two people who didn’t get along,” Esther said. “We both tried—hard.”

Now Esther is living with her mother. Her family has always meant a great deal to her. Besides her parents, she has three sisters and a brother in Los Angeles. Esther has them out to the studio to visit her, always includes them in every party she gives. When the elan gathers for Thanksgiving or Christmas, only signs and a couple of microphones are needed to make it look like a convention.

Leonard is in residence in the hospital. Despite their separation, he is eager for her to make a success of her career. At first he didn’t know whether or not she wanted that sort of life enough to keep at it. Neither did she. And neither of them honestly knew if she would be good enough on the screen ever to become a really big star. But all that was settled at the preview of “Bathing Beauty”—before the divorce was announced.

“We sat way up in the balcony, all scrunched down in our seats so no one would know we were there,” Esther said. “I was terrified, of course. I thought I’d go out and jump into the nearest river if I was really bad. But when the picture w as over and the audience began to applaud. Leonard said, ‘O.K. I’m convinced now. You can be a success.’ From him, that was my own Academy Award.”

Esther is going on. She has chosen the road to stardom. Metro has rewarded her choice by starring her in “Thrill Of A Romance” with Van Johnson, its most potent box-office personality.

And she’ll go on from there winning a real Academy Award if she isn’t careful!