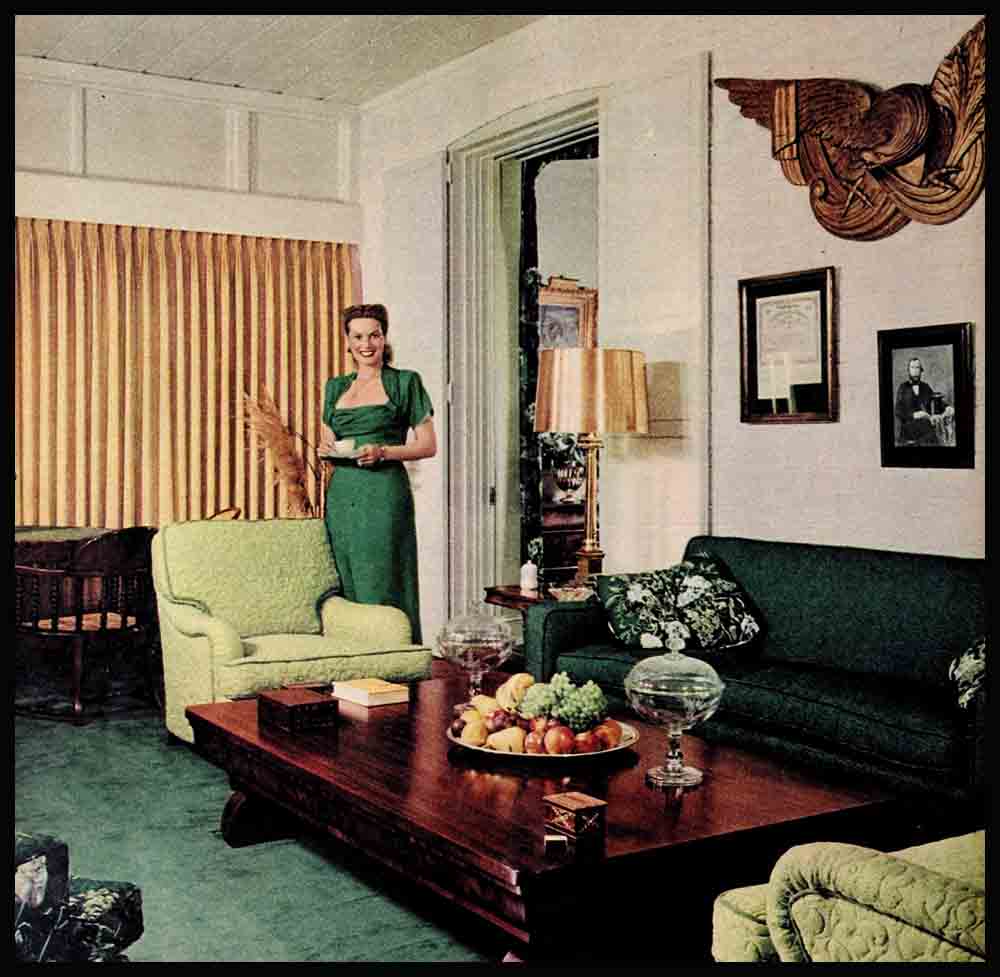 House With A Past

It’s the luck of the Irish that they have the house at all! Proud owners Maureen O’Hara and her husband, director Will Price, firmly believe that. They fell in love with the place when they saw it, but it was beyond their means. By the time they had the money for it, the owners wouldn’t sell. Came the magic day when a real estate dealer called the Prices, “Still interested in that house?” and it was theirs.

Then came the problem: What to put in it. Maureen and Will had some furniture, of course. Just to move the furniture from one house to another now that they had achieved their goal seemed anticlimactic. Yet they most certainly weren’t going to junk their furnishings.

Well, the Prices used what they could in their new abode, reupholstered sofas and chairs and gradually they’re buying other things to fill in, old pieces that will work in well with the new. In fact, a house has a lot more character if it’s filled with the things you love.

Though Maureen and Will came from countries thousands of miles apart, essentially they have the same kind of background, where the accent is on family. Both in Ireland and in the South, everybody is related to everybody else in the county.

Though many miles away from their kinfolk, the Prices are still an active part of the family group. In fact, hardly a year goes by that they don’t make a trip to one homestead or another. And these trips yield their weight in treasures for their Bel-Air home. The grandfather’s clock in the entrance hall was found by Maureen while on a trip to Ireland. But alas, it arrived in pieces, victim of rough handling on the trip. Fortunately, a wonderful craftsman came to her rescue, and you’d never guess now what a shattering experience it had. A table came from Ireland too. A group of spool-back side chairs were found in Mississippi, near Will’s home. The whole house really is a blending of Ireland and the South.

But in color it’s as Irish as the traditional Shamrock. There’s green carpeting throughout the entire downstairs. And in the living room, a love seat wears a deep green textured cotton; the outsize sofa and two lounge chairs repeat the green in the piping and quilting, but have chartreuse cotton upholstering. All of these upholstered pieces came from the old house. Restuffed and reupholstered, they’re as good as new. Take a tip from Maureen O’Hara. once you’ve bought a good furniture piece, it’s good for life! Dark green faille draperies display a floral pattern in varying tones of green, and all of the green is relieved with white walls and ceiling.

You might think that using just one color throughout would be monotonous, but this isn’t so. Green happens to be Maureen’s favorite color. With her tawny hair, green eyes and creamy skin, it brings out her warm coloring. Choose the color that most becomes you and surround yourself with it.

Maureen and Will have another decorating trick worth borrowing. They used the same colors and fabrics in the room which adjoins the living room, the lanai. It was once just a porch but they put in sliding doors, took out a window seat and continue the feeling of the living room, with more informality, of course. This way, there’s continuity between the two rooms, and the furnishings are interchangeable. There’s the same white on walls and ceiling, the same green carpeting. The deep-seated sofa repeats the green texture used in the living room’s love seat, the draperies pick up the chartreuse from the living room’s sofa and chairs, two lounge chairs are covered with the same chartreuse quilted cotton, and two other chairs wear the green faille print that hangs at the living-room windows.

Green as Ireland the room may be, but it has a Southern accent all the same! over the sofa Will placed mementoes of his Southern heritage—Confederate money, looking very handsome indeed on a green mat and in a dark mahogany frame. In the center, a Southern gentleman of the old school, Will’s ancestor, of course, looks dignified, and over the grouping a gilt Confederate eagle spreads his wings.

Maureen and Will aren’t in a tearing hurry to finish furnishing their house. The old piano will do until they find the right one, but they’re looking for a Bechstein. And over it, they’ll need a large picture or wall grouping. Right now they’re trying a pedestal table in front of the fireplace. If they decide to use it, they’ll cut it down, but in the meantime, they’re getting the effect. They chose the outsize coffee table in the lanai in just that way. Maureen found a gigantic library table in a bargain basement, saw its possibilities, had the legs cut off and gave it a refinishing job to bring out the satiny grain.

A real home grows slowly. Christmas and birthdays offer an extra chance for gifts with a real meaning. At an auction, Will bought a picture of a small seaside town in Ireland he felt sure would please Maureen. When she opened the gift, she cried. “You couldn’t have found anything to please me more. How did you know?” By complete chance, the town pictured was where Maureen had spent many a happy childhood vacation. Now it hangs over the small chest beside the living-room fireplace. Of such things is a home made. Beautiful old English wine coolers were Will’s birthday gift to his lovely wife, and on an anniversary he gave her two unusual old altar plates he’d found in Dublin.

The den came almost intact from their other house. The two couches that flank the fireplace wear red cotton shag covers that practically match the deep red carpeting, and for contrast, there are the tailored draperies and cornices, made of green, red and white plaid wool. This wool Will bought for one dollar a yard. It was regular coat fabric, but he saw no reason why it wouldn’t make good draperies and he was so right!

The mahogany step-table rode along on the moving van also, companion to the diminutive captain’s chair, proud possession of six-year-old Bronwyn. With the rich paneling, and two of the walls lined with books from floor to ceiling, the den has great warmth.

In the accessories, this room too mingles Mississippi and Ireland. There’s a striking painting by Marie Hull of a dignified old Negro, and there are some rare old Irish decanters, of china, made around 1600.

The entrance hail greets you with wallpaper of a pale yellow floral design on green ground. This blends with the surrounding rooms: the living room, down two steps at the right; the den almost straight ahead and to the left, two steps down, the gray and green dining room.

Though the dining-room floor has the same green carpeting, its walls are gray, and sheer white curtains are topped with a green and white swag, the same fabric used on the dining chairs. Talking point of the dining room, worth copying, is a small bay lined with mirrors and filled with plants. Architecturally, a large opening was needed at this end to balance the wide opening into the entrance hail, but the mirrored bay substitutes for the usual window. It’s a good trick that gives depth to any room. And you don’t need a bay or alcove to do it. Just mirrors on a wall.

Two console tables hold silver and linen, but Maureen felt that the breakfront would crowd the dining room, so she put it in the entrance hail. Here it’s very much in keeping, yet it’s close enough to the dining room to keep dinnerware and glassware within easy reach. “Try that idea in your home,” advises Maureen. “Sometimes a furniture piece looks better around the corner or in an adjacent room, yet it still can keep your equipment handy.”

The bedroom, bathroom and Maureen’s dressing room are as Irish as can be, with green everywhere. In the bathroom there’s even a map of I eland over the tub.

In the bedroom and dressing room the green’s somewhat muted, with a touch of blue. The carpeting’s white, and so is the ceiling, but walls, woodwork, bedspread and headboard all use the subdued green.

Mahogany pieces occupy wall space, including a secretary where Maureen keeps her treasures. “Here’s the beauty of our family,” said the beautiful Maureen, showing a picture of her lovely sister. Then other pictures, of other members of her family, and a more handsome group you’ll never see. Pictures such as these belong in a bedroom or dressing room and not in the living room. Portraits excepted, of course, for they are considered works of art.

Ali the bedroom furnishings came from the other house, with the exception of the four posters which Maureen and Will found in Mississippi and placed at the four corners of the bed, giving the effect of a huge poster. And a most successful idea it is, too.

The only contrast in the bedroom is in the gay floral draperies and cornices; the same print is used also in Maureen’s dressing room, to cover the chair and cornices.

Maureen has no frills on her dressing table. It’s strictly tailored and businesslike, occupying an alcove at one end of the dressing room. Drawers form the base, it has a mirrored top, and more mirrors from dressing-table top to ceiling. There are shelves for knickknacks and cupboards for cosmetics, with mirrored doors.

Bronwyn’s room forsakes the green also. Yellow roses besprinkle the walls and ceiling, and white cotton carpeting covers the floor. But the big thing is the poster bed, straight from the South—her very first big bed. It’s covered with a quilt made in the well-known flower garden pattern. The closet is a mother’s dream, for it’s the size of a small room and not only has racks for dresses, but plenty of shelves for toys.

Maureen’s and Will’s house is secluded behind a redwood fence backed by shrubs. When the gates are open you can glimpse the red brick exterior that gives no hint of the friendliness inside. But you’ll probably see, too, a bevy of children, Bron and her friends, playing under the trees or dashing up to the pool behind the house.