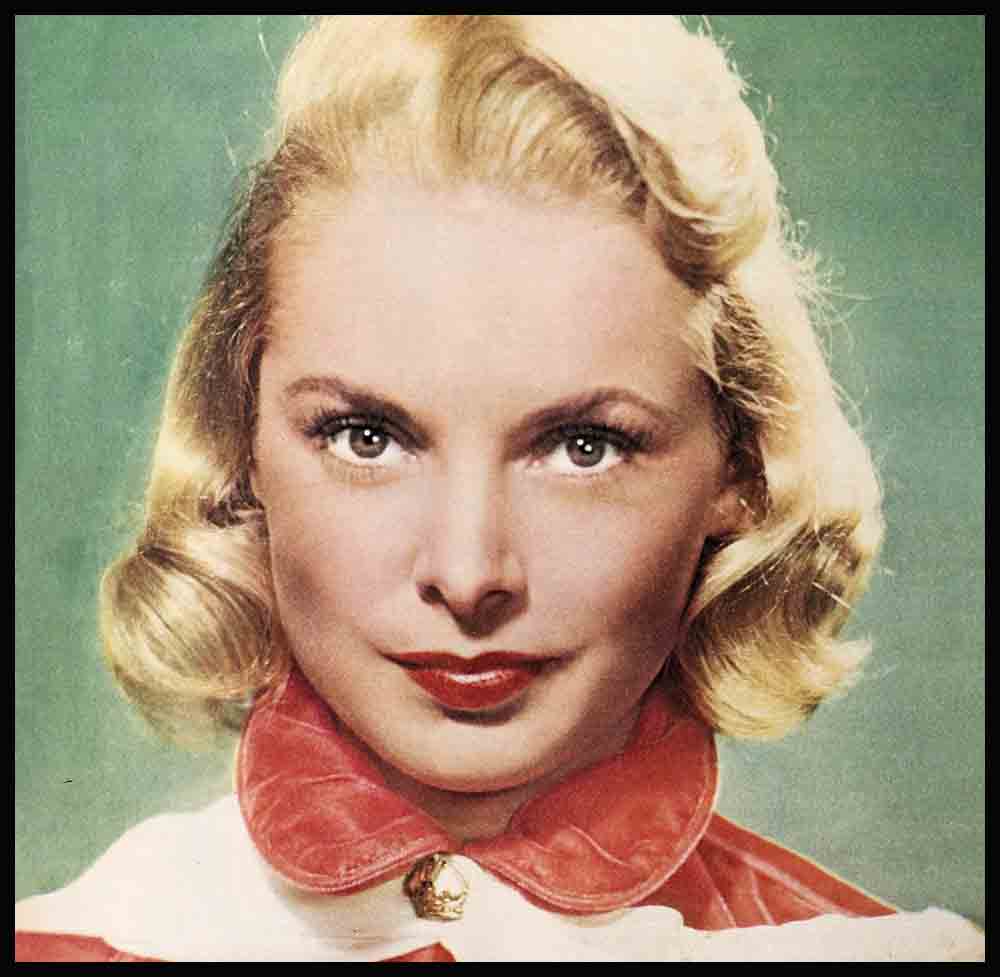 They’d both lived at home. Both were close to their parents. And, except for the fact that both happened to be movie stars their courtship was like that of a couple of kids a million miles from Hollywood. Family-type. Janet Leigh saw movies with Mom Schwartz, Tony Curtis threw darts with Pop Morrison. Before they were married, they talked things over. “Let’s not get lost,” said Tony. “Let’s not have our folks thinking we’ve forgotten them.”

After the wedding, they promptly planned all kinds of wonderful occasions. One evening they took Tony’s family to see a stage production of “Hamlet.” Part-way through the performance, Tony noticed his mother glancing at her watch. “Don’t you like it?” he whispered.

“I like it fine,” she whispered back. “But we’re going to miss your father’s favorite television show.”

They’d set aside Thursday nights for the Schwartzes. A giant earthquake couldn’t have kept them away. Then, at dinner one Schwartz night, the phone rang. Tony’s father answered. “Sure, we’d like to come,” his voice drifted to the table. “Only we can’t. Janet and Bernie are always here on Thursdays.”

“And we were so busy figuring that we were doing them a big favor that we didn’t stop to wonder whether it was convenient,” Tony grinned later.

Next came the Morrisons’ turn. “It’s all set,” Janet told her parents. “Dinner and night-clubbing this evening.”

However, in the middle of the first course, Mrs. Morrison gave her daughter a long, knowing look. “You’re tired, aren’t you?” she asked.

Until this time the conversation had been lagging. It picked up considerably. “As a matter of fact, I’ve had a hard day, too,” her father volunteered.

“That makes three of us,” said Tony.

These days the Curtises call their families often and see them whenever possible. But it’s live and let live rather than do or die. The bond between the sixsome is as strong as ever—and a great deal more comfortable. “Actually,” says Tony, “we all overdid a good intention.”

“None of us believes that a couple can have a mature relationship if their family ties are too close,” says Janet. “A young couple should have the ability to be independent. And parents also appreciate it.

“It was easier for us Morrisons because we’ve always been pretty independent. My folks gave advice only when I asked for it. And when I didn’t take it, it was up to me to come back in a month or two and say whether I was right or wrong. There wasn’t as much of a change for me and my family as there was for Tony and his parents. It was difficult for them to realize that he was a grown man.”

At first the Schwartzes were apprehensive about meeting the movie star, Janet Leigh. Tony had invited her to dinner. Pop Manny set eyes on Janet, shook her hand, and gave Tony a proud slap on the back. “Just like his father!” he said.

Janet and Mom Schwartz took to one another the minute they met. As usual, the family ate in the kitchen. Janet liked the idea. And she still remembers the soup, the roast chicken, the stuffed cabbage. She also remembers how they kept glancing at Manny and Tony as they did away with the food. “It seems we both like to see our men eat,” Janet laughed.

“The important thing when you meet your fellow’s folks is to be yourself,” she says with conviction. “And I guess I was that night. After dinner, we stacked the dishes and Mom Schwartz tried to shoo me into the other room with the men-folk. But they weren’t calling me ‘General Leigh’ at home for nothing. I don’t believe in putting things off, and I won our mock battle. We both did the dishes.”

“I seem to recall being strictly myself when I met the Morrisons,” Tony recalls.

“Mother announced him,” says Janet. “She rushed into my room grinning, ‘He’s here. And he’s so handsome!’ ”

A minor comedy of errors followed. Walking across the lawn Tony had noticed that his heels were digging into the ground with gusto. “Your lawn is awfully soggy,” he remarked to Mr. Morrison by way of striking up a conversation.

“We just had it replanted,” Mr. Morrison informed him gently.

Leaving the house, Tony had words with his date. “Your father is certainly a nice fellow,” he told her. “What a sweet way of saying keep the heck off the grass!”

For a long while, Fred Morrison was non-committal in regard to his future son-in-law. “He’s quite reserved,” says Janet. “And he doesn’t give an opinion for an eternity. He didn’t say whether he liked or disliked Tony. But I can tell when he disapproves and I was fairly certain he didn’t disapprove.”

One night he confirmed her suspicions. She was giving a cocktail party and buffet dinner. She and Tony had known each other for five months and had gone steady for three of them. It had been rumored that they were engaged and an announcement was expected momentarily. Around eleven o’clock, Tony stepped up onto a coffee table. “Silence,” he commanded. “I have an announcement to make.”

“Let’s both do it,” said Janet coyly.

Everyone waited expectantly. “Dinner will now be served,” they chorused.

“Are you going to announce your engagement?” her father asked later.

“No,” he said. That was his way of letting her know that he did like Tony.

Janet has always believed that honesty is the best policy family-wise as well as otherwise. Even in the days before their engagement, she clung to the theory. She’d gone to dinner at the Schwartzes one evening and afterwards she and Mrs. Schwartz were doing the dishes. Janet was upset about an earlier incident and let it be known. “You shouldn’t get mad at Tony,” Mom told her. “He likes you very much.”

“I felt Tony was wrong,” Janet replied. “But that doesn’t mean I don’t love him.”

Janet explained. “We have a lot of things to work out. Just now he’s thinking about his career and I don’t want to clutter his mind.”

“It won’t get cluttered,” Mrs. Schwartz assured her.

“When it happens, it will happen,” said Janet philosophically.

“But you do want to marry Tony, don’t you?” his mother persisted.

Mrs. Schwartz became Janet’s good friend and protector. Once when Janet was visiting, along with a great many Schwartz relatives, she was determined to make certain that everything would go smoothly and left nothing to chance. She didn’t want anyone saying anything that might offend her son’s girl. Consequently, she found herself in the role of go-between. Each time an aunt would so much as look as if she wanted to question Janet, Mrs. Schwartz would arrive on the scene. “What are you going to ask her?” she’d inquire.

Aunt quietly stated one query. “Janet, Aunt wants to know if your hair color is natural,” Mom relayed the message.

“It is right now,” came the answer.

“Certainly it is,” Mom boomed to Tony’s aunt.

It was brother Bobby who was the unknown quantity. He was excited at first because Tony was dating an actress. Later, his tone changed. “Oh, she’s beautiful, but when are we going to play baseball if you’re going with her all the time?” he wanted to know.

Their engagement bewildered him. “What does this mean?” he seemed to be saying. “Will Tony have to move out now?”

Then, too, Janet was a girl and she was going to become a member of the family. After the wedding, Tony would insist, “Kiss your sister.” But Janet put her foot down. “I don’t want to force our friendship,” she told him.

Acceptance did come. Janet knew it when Bobby approached her for advice. He inquired if she thought it was wrong when he didn’t go to bed when his parents wanted him to. “It’s this way,” said Janet. “In growing up you have to do a lot of things you don’t want to do. If you want to remain a child, you’ll fight it. But if you want to become a man, you’ll have to live in the right way now.”

“I have to get up at five,” Janet went on. “I don’t especially want to. I have to be in bed at eight when I’m working because of my job. Your job is to go to school and get the most out of it. And to do that, you have to get your rest.”

Both Janet and Tony thoroughly enjoy being with their in-laws. “Let’s go see your cute, gullible mother,” Tony will suggest. “I have a new joke.”

He and Dad Morrison collaborated on the last one and consider it an outstanding success. They drove the car part-way into the garage and jacked up the rear fender. They made certain that it was at an angle where the jack could not be seen. When Mrs. Morrison arrived on the scene, she noted her son-in-law manfully holding up the car, all by himself. “Janet,” she screamed. “Come see what Tony’s doing.”

Tony’s always walking in with his hand tucked into his sleeve. He tells his mother-in-law that he lost it on the set playing poker and she breaks up. “Best audience I ever had,” he vows.

Janet enjoys Tony’s parents equally as much. She’s always calling for Tony’s favorite recipes and they get together frequently for girl-talk.

Because of her career, Janet’s attempts at housekeeping are limited. But she rules the roost and there’s little doubt about it. When the Curtises moved into their new home, her mother came over to help her get settled. After a while they found themselves disagreeing as to where things should go. “I’m sorry, Mother,” said Janet. “But you do it your way in your house and I’ll do it my way in mine.”

The families are closer than ever in an hour of need. When Tony’s father suffered a heart attack, Mrs. Schwartz called Janet immediately. Janet stayed with her for several days. And she was the one who broke the news to Tony when he returned from a personal-appearance tour.

Even now they keep a close watch over Manny. “We’re going to have to put our foot down,” said Tony. And so they put their feet down. “You brought it all on yourself,” they tell him. “You have to learn your limitations. Calm down, take it easy.”

Tony was in Hawaii on location when Janet’s folks told him that she had lost their baby. “And it’s a good thing, they talked to him first,” she says. “It was easier for him to hear it from them. We were both heartbroken and his first reaction would have set me off again.”

So there’s no doubt about the fact that the Curtis-Schwartz-Morrison families are and always will be inseparable as a unit. Their feelings are mutual. It was that way even before Janet uttered those now famous words over the long distance telephone after their marriage . . . “Hello, Mrs. Schwartz? This is Mrs. Schwartz!”

(Janet is in “Prince Valiant”; Tony, in “Johnny Dark”)