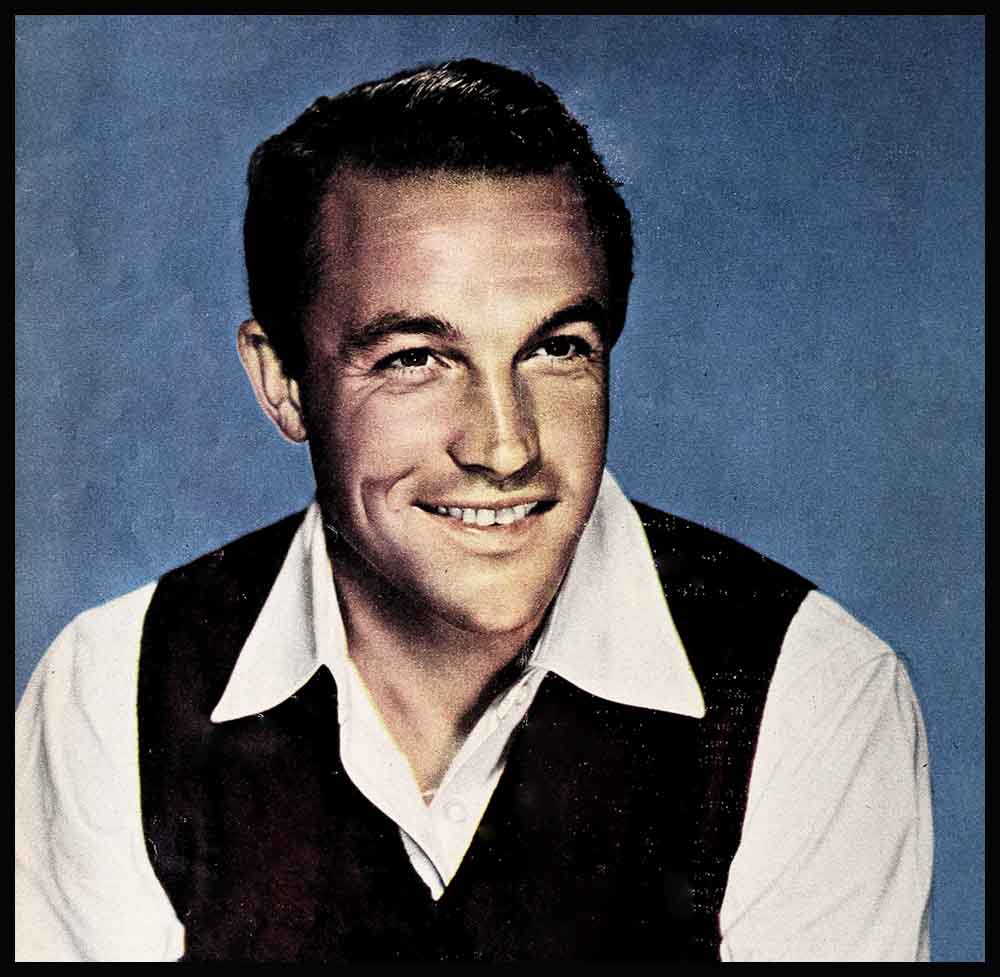 Keeping Up With Kelly

Gene Kelly, Metro-Goldwyn-Mayer’s hoofing heart breaker is one dancer who’ll never be in the groove. That is, not any one groove. For Gene is a hoofer who not only has diamonds in his feet but many carats in his head as well.

Before Uncle Sam tapped him on the shoulder his complex activities kept him busier than a one-handed politician on election day. If you could have shadowed Gene you’d have seen another and far different Kelly, a chamber-of-commerce type of guy or, as he himself says, “just another Brother Elk.”

Come six o’clock every evening, Gene pulled off his dancing slippers, parked them inside the studio lot, rolled up his sleeves and took over his duties as just another citizen. Important duties to him. Such as conferring with different committees, making short-wave broadcasts overseas for the boys, playing a benefit to raise money for a recreation hail to help combat juvenile delinquency, or maybe boning up on some speech he’d been called upon to deliver, possibly at a political rally at the comer of Third and Fairfax in West Hollywood.

Gene is intensely interested in politics and government, in the principles of fair play and security for all, more tolerance and better racial understanding.

Long before this year’s presidential election made it fashionable for movie stars to shine on both sides of the political marquees you could find both this vigorous young American and his vivacious red-haired Betsy hard at work, slugging away to help put across the bill, the proposition, the man they believed in their hearts to be right.

You’ll always find Gene, whether it be politics or anything else, out slugging for the underdog, the little guy.

Recently he went all out bitterly fighting a proposition he felt to be definitely anti-labor and against the little people. He addressed meetings at night and Betsy addressed circulars during the day. She also did house-to-house canvassing in the swank Beverly Hills sector at homes whose residents didn’t dream that the pretty girl in the sweater and skirt—“that nice little Mrs. Kelly”—was the wife of a famous motion-picture star.

Gene’s very proud of his intelligent young partner, his only “beef” on her political activities occurring one evening when he came home hot and tired from rehearsing a tricky routine with Fred Astaire and found she’d forgotten to stock the icebox with beer. Either real or root.

“No wonder men in the past centuries didn’t want their wives to vote!” he kidded. And ducked.

He’s very enthusiastic about the part he believes motion pictures can play in the promotion of peace. And is very thrilled over a letter he received recently from Fred Astaire from overseas—in which Astaire said he’d been to a German prison camp in England and described how excited all the Jerries had gotten at seeing a Hollywood star. “They all wanted autographs!” Fred had written.

Ambitious by nature and proud of the strides he’s made in a picture career in such a short time, he still feels achievement is the important thing. Being a motion-picture star in itself has nothing to do with Gene’s personal philosophy of happiness. As he says, “I don’t care a thing about champagne.

“You can’t buy the really important things,” he explains. “You find that out after a while. Funny, but after you get more money than you’ve ever had you find out you really didn’t need any more than you had anyway,” he says, remembering other happy days in other and less remunerative jobs. Like, say, apprentice bricklayer, soda mixer and concrete mixer. “You can’t buy any more laughs than you had then,” he reminisces.

“Actually the best things in life are free anyway,” says Gene. “The really important things don’t cost anything. Things like sunshine, good stimulating conversation, congenial company, good health and a lot of laughs. We’re lucky enough at our house to know the people who know how to make laughter, how to take it and how to pass it around,” he grins.

That’s plenty evident. From the time the familiar figure of Kelly in his rehearsal togs would come through the door, the commissary at M-G-M would begin to take on the air of a meeting of the local Optimist Club as stars, directors, writers et al would hail him with a “Hey, Gene—”

He’d use up most of his lunch hour shaking hands the width of the room. Then, watching the clock with one eye, he’d bolt down the cream-cheese sandwich the knowing waitress put in front of him and dash off, “speaking” his way out of the commissary again.

Around the lot he’s known as a very intelligent, reasonable, levelheaded person. And with no temperament.

There are a few things that get a rise out of his Irish nature, chief of which is seeing an injustice done anyone. Then, too, conscientious worker that he is, he dislikes lengthy interruptions whenever he’s rehearsing or creating a new routine.

He’s very popular with reporters who cover the Hollywood beat. The only time he’s ever tangled with any reporter was when a columnist dreamed up the fantastic tale that Gene and Betsy were separated. At that very minute the Kellys were having dinner at the home of their close friends, the Richard Whorfs. They laughed it off as too silly even to get mad about—until they got home and found out that they had two long-distance calls waiting, from Gene’s mother in Pittsburgh, and from Betsy’s in New Jersey. They soon found themselves trying frantically to explain to their respective mothers-in-law in three minutes what others have taken a lifetime to solve: Namely, just where reporters get the hat out of which they pull such things.

More than anything else Gene would like to gain still more recognition as an actor and get more dramatic roles such as he had in “The Cross Of Lorraine” and “Christmas Holiday.” That is, the last part of “Christmas Holiday.” Being very self-critical, Gene can’t see himself in light love scenes, although Betsy thought his love scenes with Deanna Durbin were swell. “He thinks he was too coy,” teases Betsy, “but I thought he was really cute in them.” Gene winces. “That’s what I mean,” he says, “I can’t do that light love stuff without looking—cute!”

He’ll take nothing less than perfection in his dancing and works constantly at dreaming up dance routines that on paper look like combined military operations.

You could always find Gene still going strong at three and four a.m. in the pretty blue-toned living room at home, setting the timing, mechanics and pantomime. Nothing he does surprises Betsy any more. She became used to seeing him sitting there in a trance, thinking something out, then suddenly taking off like a streamliner over the furniture around the room.

He thinks Fred Astaire, with whom he does the “Babbitt And Bromide” number in “Ziegfeld Follies” is “the tops.”

They rehearsed six hours a day for this number and every night when they went home each of them would try to dream up something to stump the other one on the next day. Then they’d compare notes. With much kidding.

In “Anchors Aweigh” Gene tangos with Kathryn Grayson, does a charming Mexican number with seven-year-old Sharon MacManus, a sailor routine with Sinatra and has a solo number that should be the show-stopper of all time.

Frankie will tell you that Teacher Kelly is plenty okay. “He has one of the greatest talents in the country,” he says. “Nobody can match him. And he’s so patient!”

All this swoon business—girls squealing whenever he’s announced—still comes as a big surprise to him. The levelheaded, modest Kelly who thinks of himself in terms of a normal, Brother-Elk sort of guy, can’t get used to being mobbed by bobby-sockers and feminine fans. One thing it proves—that they swoon from the feet as well as the voice. Though when his pals kid him about it, the most Kelly will admit to causing is a semi-swoon.

But he causes ’em to keel over, anyway. Keeler-Kelly, they’re calling him now.

Gene loves children and every kid within biking distance of the Kelly house used to come visiting on week ends to play ball, Ping-pong or “Kick the Can” with the Kellys and their friends. You could usually find a goodly portion of Metro’s younger contract list there, too. Such folk as the Keenan Wynns, Nancy Walker, Judy Garland, Bob Walker and the Richard Whorfs.

It made Gene and Betsy very happy for their friends to come over to their house because they’d always rather stay home anyway. They say they had more fun there.

It’s always hard for Gene to tear himself away from the side of his glamour girl—two-year-old Kerry with the soft brown curls and blue, heavily lashed eyes—and his pretty wife who looks to be just a charming kid.

Betsy is quite a dancer in her own right, having starred on Broadway in Saroyan’s “The Beautiful People,” but will tell you that she can’t dance with Gene. “Oh sometimes we clown around,” she says, “but he’s much too good for me!”

Gene, on the other hand, will tell you otherwise. He’s very proud of Betsy’s talent and he wants Betsy definitely to go on with her career now that he is in service.

Both of them hope that Kerry will follow them in show business and are very proud that she can do a whole mild dance routine even now. Whenever she hears music she’ll hang onto a tea table with one chubby hand and start stamping violently.

At which she throws both hands up in the air—and still stamps violently.

Just before Gene went into service, Betsy had gone to New York for a long-delayed visit with her mother, and Kerry and Gene “batched” together at home. Kerry stayed behind with the nurse and her dad, for, as Gene commented, “I just can’t spare both my women, at the same time.”

When he put Betsy on the train they made a bargain to just talk to each other long distance twice a week—late at night when service men wouldn’t need the lines.

“But we were both so lonely that we talked the first four nights out of six,” Gene grinned sheepishly. Always very late at night.

Meanwhile, Kerry took over as lady of the house and business went on nearly as usual at the Kelly home. They had a little domestic routine they would go through every day, beginning when the colored nurse “Mamie” brought Kerry into Gene’s room early in the morning so that she could “talk” to him while he was shaving and getting ready for the studio. Then they would go down to breakfast together, Kerry gossiping cheerfully at the table in what Gene calls the “biggest mass of double-talk you’ve ever heard.” He does, however, recognize her “Da’h” for “Daddy” and it sounds like pretty hot dialogue to him.

He had looked forward to going overseas to entertain the boys. He’s hoofed it a lot on the hospital circuits and has seen just what it means. It was his report to the Hollywood Victory Committee about the need for a regular hospital entertainment tour that helped push the organization of such a unit.

The heaviest-hearted hoofing he’s ever done was a request for “For Me And My Gal” for a boy he knew was going to die the next day. That was one time Kelly had all he could do to keep from crying as he hoofed.

There is a prophetic ring to the fact that Gene’s latest picture is “Anchors Aweigh,” for Gene’s a Navy lad now himself. The Navy may still decide his flying feet are more valuable as morale builders than for swabbing down decks. But whatever the decision, rest assured Kelly will be in there swinging—from the hip or from the heart.