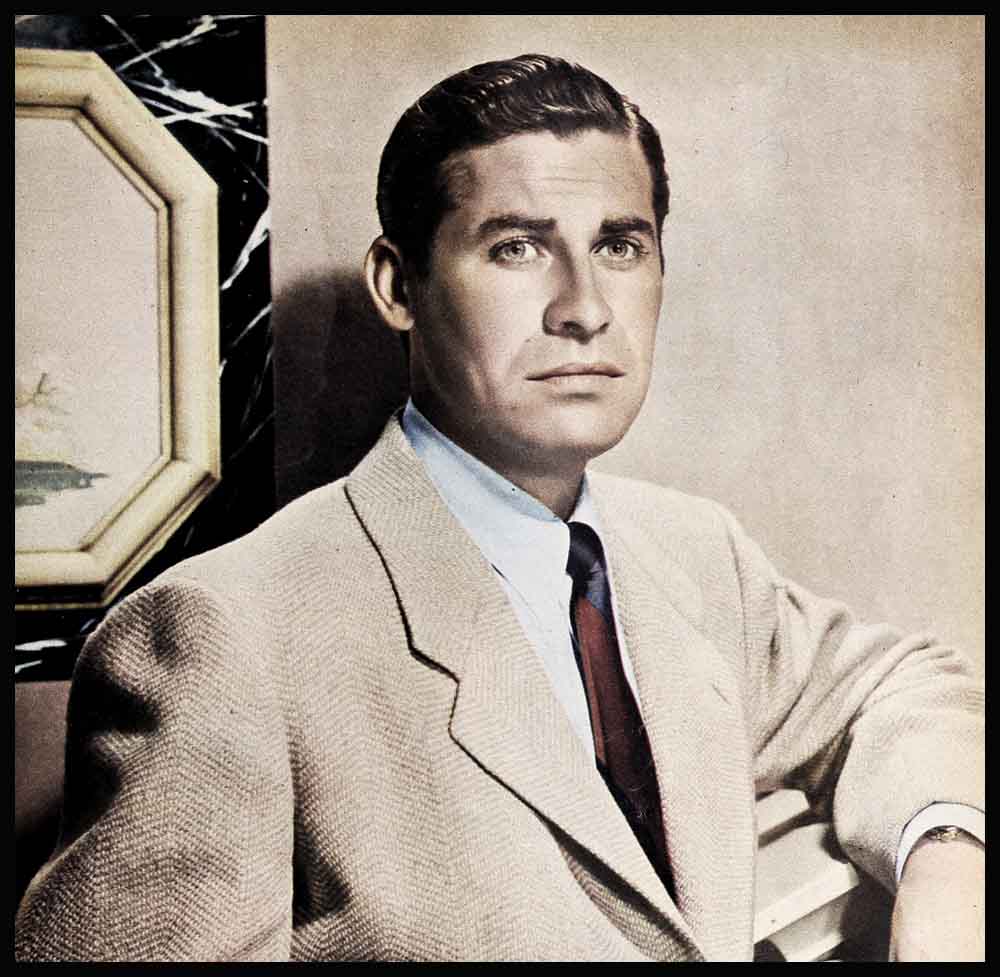 I’ve been very busy investigating John Hodiak. There are two reasons. The first: He is the hottest thing since Sinatra began losing his bobby-soxers to Van Johnson. The second: Anne Baxter. I’ll start with the first one.

Hody is strictly U. S. A. He’s a wonderful sample of democracy at work and what happens when Horatio Alger and the American dream are rolled together. You prob-ably know that he’s the son of Ukrainian immigrants—factory workers. Simple, direct, honest people. They are that and their son is that. Hody has just brought his mother and father out to Hollywood. The first thing Pop did was to go over to Lockheed and get a job on a drill press. Nothing’s different from the way it used to be back in Detroit except that Hody’s working now, too, and the house they’re living in is smaller than the one it took them years to pay for back home.

Hodiak gives you the same feeling people like Gable and Hope and Crosby give you. He’s a right guy. When he’s not working, he never plays anything but himself. And that quality slides over into his work. That’s why you’ll like him in “Sunday Dinner For A Soldier,” the picture he made with Anne. And why they talk about him in that Lana Turner opus, “Marriage Is A Private Affair.”

It’s good to be with him. He makes you feel warm. He laughs easily and it’s a swell laugh. He grins all the time. Add together the tough white teeth and the grin and the mustache and crew cut they gave him for “A Bell For Adano” and you have the makings of a major pin-up boy. I suggested that idea to him—and ducked. He doesn’t want glamour. He’s an actor, not just a leading man. He’s not making up quotes for studio press agents when he says he decided he’d be an actor twenty years ago. That was when he was eleven. He started by way of radio. Then came the screen test which Alfred Hitchcock saw by accident and which put him in “Lifeboat.”

The twenty years didn’t bother him. John is stubborn and patient. He has standards and a sense of values. He knows what he wants and he’s surer than the devil that he’s going to get to it. He’s willing to work, willing to make detours, willing to wait—but he won’t back down. Metro found that out when they first hired him. A big executive called him in, said: “Well, young fellow, the first thing we’re going to do is change your name.” Hody, ignoring the rules of scared, new employee meeting big shot, said: “What for?” The executive sputtered. Hody went calmly on. “It’s been good enough for my father and mother. If you’re going to use my name, I want people to know it’s my parents’ son you’re talking about.”

But with all this patience and calm and sureness, he’s not stolid. He moves quickly, reacts quickly. One thing about him that seems to surprise Hollywood’s seasoned citizens is the fact that he’s a gentleman—an old-fashioned one. There’s something courtly and old-worldish and dignified in the way he talks to women, for example. Watch him in the same room with some of the brasher idols of the day and you realize that Hody has a quality much more valuable than a box-office return.

His success means only four things to him. It means that he’s doing all right so far as Mom and Pop are concerned. It means that he can be a respected actor. It means that he has money enough now to learn music. He’s a music nut in a good way. No pretense about it. He knows more about hot trumpet players than anybody I’ve run across. He also knows what happens when Toscanini gives the downbeat. He just knows it instinctively because by instinct. he is a cultured, sensitive man.

And it means he knows Anne. I think Anne has more talent, charm and good sense than any other youngster in the business. She proves it in the way she picks her friends. People mean a lot to her so she’s very, very careful about them. She’s never gone for glitter, has been a wizard at avoiding phonies and phoniness. She met Hody on the set of “Sunday Dinner For A Soldier” and they’ve been meeting ever since. Not that theirs is an untrammeled romance. There have been and still are some hurdles to be cleared. And neither one will say what’s to be tomorrow. But today’s okay. So is Anne.

And so is Hody.

You have probably guessed by now that I am very glad I investigated Hodiak. I think he’s one of the best things that’s happened to Hollywood in a long time.