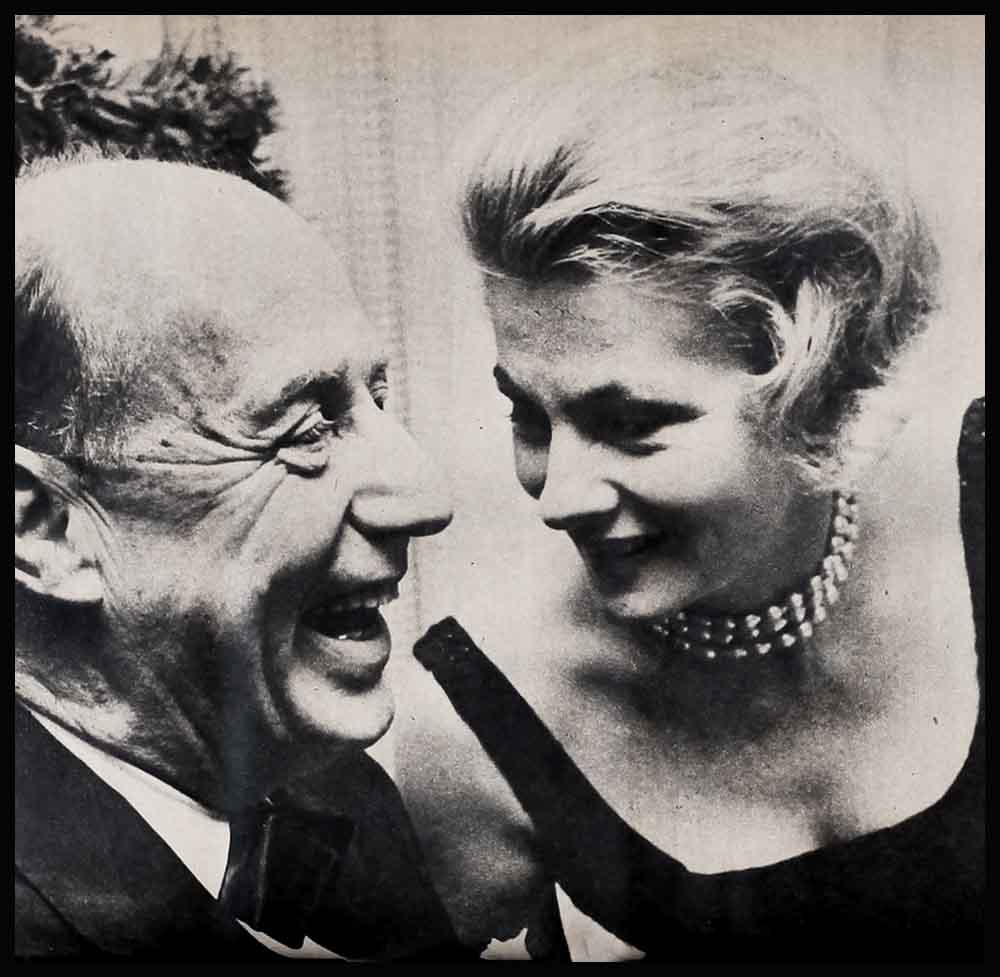 First, there was the photograph on Joan Fontaine’s desk. There it stood.

In the simple frame was a portrait of Adlai Stevenson—a face that is known the world over. And at the bottom of the photograph, in Ambassador Stevenson’s own strong handwriting, was inscribed: “To Joan Fontaine, whom everyone loves.” And beneath it, the signature “Adlai E. Stevenson.”

A diplomat’s diplomatic inscription. The “m” in the word “whom” had been added in what looked like a different color ink as if someone—Joan herself? Ambassador Stevenson?—had realized the grammatical error and corrected it.

Secondly, there was the folder of column items in my briefcase.

“Joan Fontaine, who of ten is escorted by UN Ambassador Adlai Stevenson, refers to him always as ‘The Governot.’ ”

Item—Hedda Hopper in the New York Daily News: “. . . Adlai has a new girlfriend and I won’t make you guess who. It’s Joan Fontaine.”

Item (guilt by association?)—Dorothy Kilgallen in the New York Journal-American, writing about guests who danced The Twist at Eva Gabor and Dick Brown’s Christmas party: “. . . it was unofficially decided that Red Buttons and Joan Fontaine deserved the top prizes in their respective divisions—Red the snakiest twister, Joan the most dignified.”

Thirdly, there was the two-page picture in Life of Ambassador Stevenson laughing heartily at something Joan had said.

Next, there was the statement Joan had made before the columnists began to link her with Ambassador Stevenson. After speaking of her three previous unsuccessful marriages, she had vowed, “The next time, I’m going to get married for myself. I think a diplomat is the sort of man I could be happy with. A diplomat needs a successful and pleasant woman to give parties and he a good hostess. There’s nothing competitive about their careers. This makes for a good relationship.”

Finally, there was Joan herself—about forty-three but looking more like twenty-three, willowy and blonde with amazing eyes, clear, lustrous, cosmetic-advertisement skin and a profile whose perfection no Greek sculptor could have captured in marble. A woman whom almost any man, diplomat or not, would love to look at and I be seen with.

I showed her the column items linking her with Ambassador Stevenson and asked for her reaction.

“You won’t see any more of those,” she said.

“None of those items are of my own doing,” she answered. “I have no press agent. . . . It’s just that whenever any eligible woman is seen with any eligible bachelor, it gets into the papers. If I went out with a married man—which I wouldn’t—the columns would never mention it. Columnists have a ‘thing’ about protecting married men.”

“Then where do the columnists get their information?”

“People just talk,” she said. “If we show up together at a party where there are 200 people, the next day 1.000 people know about it. He’s escorted me only to private parties, yet the guests always seem to have their antennae out for gossip.”

“Do you think the items about you and Mr. Stevenson bother him?” I asked, thinking about Walter Winchell’s statement in the New York Daily Mirror: “Adlai Stevenson’s UN staff whisper how ‘upset’ he was over being linked romantically with Joan Fontaine.”

“I think he feels it’s not very dignified to be seen with any woman regularly and to be talked about publicly, especially when there have never been so many political crises in the world,” she said.

“What can you and he do about the publicity?”

“We just won’t be seen publicly any more,” she said. “That’s the danger. At parties the talk goes out like waves.”

“When did you first meet Mr. Stevenson?”

“Ten years ago,” she replied. Then, seeing my puzzled expression, she laughed. “I’ve known him for ten years, but not closely. After all, we’re fellow Democrats.”

I took two column items from my brief- case and put them on the table. Both were written by Cholly Knickerbocker, Society columnist for the New York Journal-American.

The first stated: “If Adlai Stevenson is upset, as we have read, concerning the recent publicity linking him with beautiful Joan Fontaine, then all we can say is that his job at the UN must he getting to him. Ambassador, you couldn’t have done yourself more good if you’d hired a press agent to get you in the papers.”

The second read: “The story this week linking lovely Joan Fontaine to Ambassador Adlai Stevenson has created a great deal of comment in theatrical, political and social circles. Actually, nothing could he more complimentary to Mr. Stevenson, and it is the sort of publicity that would have helped him considerably when he was running for office. For what better recommendation can there be to an attractive. unattached man than the company of a beautiful woman.”

I asked Joan if there’d been any criticism of her being seen with Mr. Stevenson.

For the first time Joan frowned. Trying to control her temper, she said, “Lots of so-called society people said to my face that it was shocking for a dignified man to be escorting an actress. That made me mad. I think an actress is as dignified as a diplomat or a politician or anyone. It all depends on the person. I’m glad I’m an actress. I’m proud of my family lineage.”

“Just what is society?”

“Just recently I invited a society man to tea,” she said. “I asked him. ‘Do you go to the theater?’ And he answered, ‘Well, you see, I live on the East Side and the theater is way over on the West Side.’ If that’s society, may I never be there.”

Then I showed Joan the photograph of her and Adlai in Life.

“Oh, oh,” she said, “that picture is enough to cause all the furor even if we never saw each other again.”

A different reaction to the picture is one recorded by New York Post columnist Leonard Lyons. He wrote: “Adlai Stevenson’s friends were delighted to see his Life photo with Joan Fontaine. A few years ago at a party here he admired a blonde beauty. A friend whispered, ‘Tomorrow night, if you come to dinner, I’ll have her and six other such beauties there—just for you.’ . . . ‘I can’t, tomorrow night,’ said Stevenson. I’m dining with Nehru.’ . . .‘You turn down seven beauties for Nehru?’ his friend sighed. ‘Now I see why you lost the election.’ ”

I flipped through some of the column items I had with me and asked for her comments.

To the one calling her Ambassador Stevenson’s “new girl-friend” she snapped. “It’s dreadful. Shocking. I can go out with seven different men seven different nights of the week and there’d he no comment. But when I’m escorted by a famous man, suddenly it makes good copy. Why is a romantic connection immediately made when one is seen with a charming escort?”

I continued my questions. Did she call Mr. Stevenson “The Governor,” as Louis Sobol claimed?

“Yes, everyone who knows him well calls him this,” she explained. “He identifies himself with that title. That’s what his secretary calls him. Even his place cards have that on them.”

I pointed out that some columnists even make a point of her going somewhere without Mr. Stevenson, as had Suzy in her item about artist Bouche’s studio-warming party.

For a few seconds she giggled like a schoolgirl, and then she caught herself. “My escort at that party was Borden Stevenson, Governor Stevenson’s son. What a story the columnists could have dreamed up about that!”

For a moment my eyes strayed over to the photograph of Ambassador Stevenson on her desk. But she chose to talk about another picture there, a news shot of the ruins of her Hollywood home that had been completely gutted by the fire last fail.

But there were still a few embers smouldering in the ashes. Memories of the past that she couldn’t stamp out. . . . She talked about them.

Three marriages. Three divorces. But she’s still not bitter and would marry again if a man with an “extraordinary sense of humor” came along.

About her illness—in 1957 she went to Switzerland to ski but “couldn’t make my legs work.” She lost weight, ran a temperature, felt horrible. Doctors could find nothing wrong with her and recommended psychiatric treatment. As she was waiting in the corridor to see her psychiatrist for the tenth time, one of her doctors passed by, saw her, asked how she felt (“lousy”) and took a blood sample.

Then came a long recuperation period during which no one wrote to her and no one visited her. She says of that time: “I was too ill to kill myself, but if I had had the strength, I would have.”

About her daughters—13-year-old Debbie was taken from her by the court in a custody battle, an action she labels “legal kidnapping”; she lost custody of 15-year-old Martita, too, but adopted her back in 1951.

Then the photograph of Adlai Stevenson drew us back from the past, which isn’t quite dead, to the present, which is very much alive.

“Are you in love with Adlai Stevenson?” I asked.

“No,” she answered. “I love intelligent men, but it doesn’t mean I’m in love with them—or they with me.”

“Is Adlai Stevenson in love with you?”

I hinted around it. “I read that Ambassador Stevenson learned The Twist.”

“I see where you won a prize for doing the ‘most dignified’ Twist.”

“It’s a barbaric dance,” she replied. “I dance it once an evening just to be sociable. That’s all.

After an answer like that, how could I ask anything else?

A few days after the interview with Joan I read a column item that surprised me very much. She had assured me that I wouldn’t be seeing any more column mentions linking her with Ambassador Stevenson. Yet here was Elsa Maxwell, society columnist, telling us that at a dinner party Joan Fontaine had confided to her that she’d dined with Adlai Stevenson the night before.

Strange. But I guess a beautiful woman always has the right to change her mind.