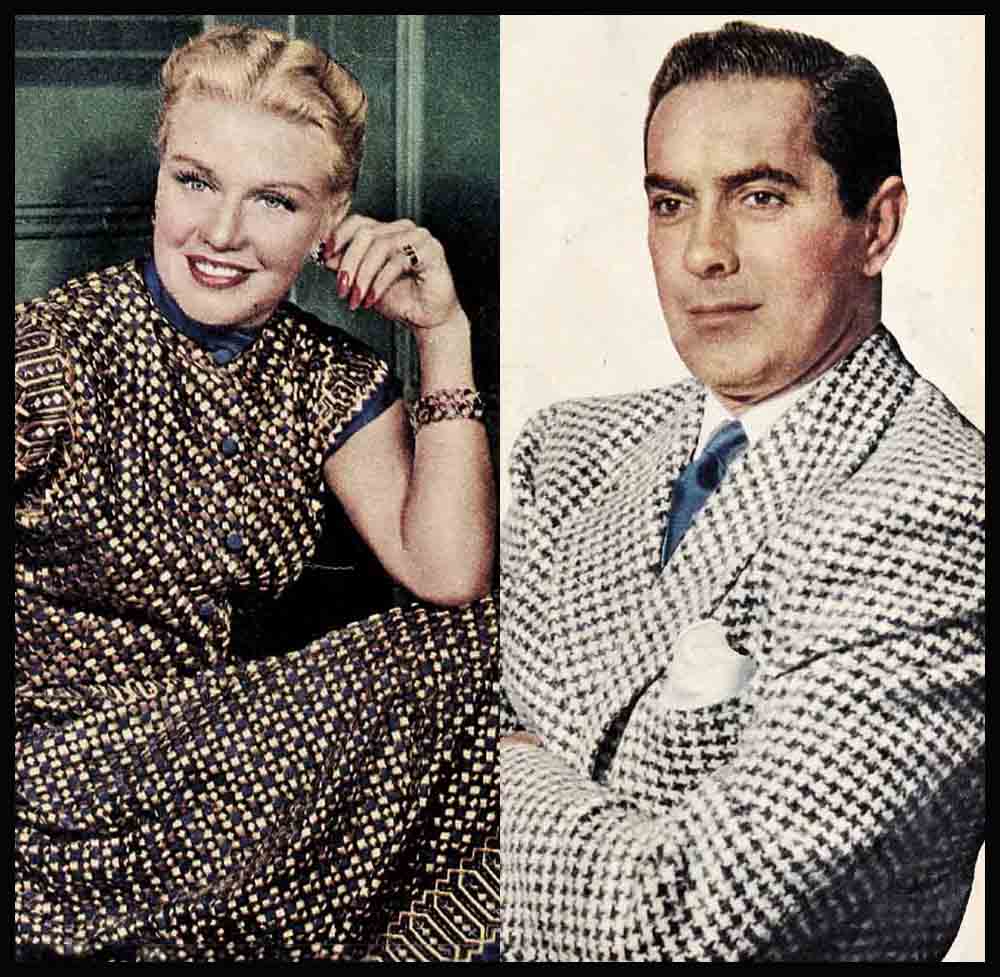 When Burt Lancaster was recently offered a movie with Joan Fontaine, he reportedly said, “I’d rather go back to catching lobsters again.” So I did some checking. Burt’s allergy to Joan, and probably vice versa, goes back to when they co-starred in “Kiss the Blood off My Hands.” Joan, rightly or wrongly, believed that Burt was usurping the privileges of the director. And when she was asked by Norman Foster to re-do a scene, she paused dramatically, then cracked, “Shall I do it the way you want me to do it, or the way Burt Lancaster is directing?” Now, says Burt, washing Miss Fontaine off his hands, “I’d rather take Marjorie Main.”

There are many reasons why you hear stars say, “I’ll never work with her again,” or, “I’ll have to be desperate to make a movie with him.” Some antipathies are personal, some are professional; some are purely petty.

Before Mark Stevens signed a contract at U-I, he said, “Don’t put me in a picture with Shelley Winters.” Next thing I hear Shelley is testing with Mark for “Little Egypt.” But I guess he meant it, because next thing I hear, Shelley is not in the picture. I guess Mark was scared off by reports of Shelley’s temperament. Joel McCrea is one actor who can take Shelley and keep his sense of humor. “I don’t mind working with her,” he told me. Actually the even-tempered movie veteran seems to enjoy it.

Tyrone Power breathed passionately into the pretty pink ear. “I love you, dar—” he started—then suddenly screamed ‘Holy smoke!” Jean Peters, the owner of the ear, jumped “What the—” stormed director Henry King. Ty pointed tragically to the wad of chewing gum nestling behind the lobe of Jean’s ear, parked there by the young lady seconds before the scene. They removed the sticky stuff and continued. But the fire was out, so far as Ty was concerned. He has never made a picture with Jean since.

If Dennis Morgan never makes another movie with Ginger Rogers, you won’t find him crying into his beer exactly. Dennis had his first break with Ginger in “Kitty Foyle.” But in their recent movies, Dennis learned never to underestimate the power of a woman with a director. When it came to the dialogue, Ginger, so I’m told, would put her arm through the director’s, and walk and walk, and whisper and whisper. When she came back to Dennis, she’d be smiling and smiling. And her dialogue would be stronger and stronger.

No one quite knows why Dan Dailey suddenly reneged on co-starring with Betty Grable in “My Blue Heaven.” There were many rumors but no corroboration. And then just as suddenly Dan did make the picture. But from now on both stars will be seen more and more frequently with different dance partners.

When Bette Davis finished “The Old Maid,” she was reported to have said, “I’ll never make another picture with Miriam Hopkins as long as I live.” But when producer Henry Blanke was casting “Old Acquaintance,” Bette called him and said, “Look, the part was written for Miriam. She’s a darned good actress. Get her.” Miriam hadn’t worked in quite a while. At first she was an angel. By the second week she wasn’t an angel. By the seventh week—!!! Came the scene when Bette had to shake, slap and tell her off. Bette shook so hard that Miriam’s earring flew clean across the sound stage! I don’t think that Bette will ever make another movie with Miriam. That, my friends, is understatement.

No top lady star likes to work with a comedian. For the simple reason, she invariably ends up as a stooge. This is the chief reason Virginia Mayo wanted to leave Sam Goldwyn. She was tired of stooging for Danny Kaye. And when Corinne Calvet found herself in the Kaye

“On the Riviera” picture, she told me she planned to save her best tricks for the actual scene—“so he can’t cut them after the rehearsal.” But Eve Arden actually wanted to be in Danny’s “Inspector General” picture because all that mattered to Eve was: “How good an actor is he?” And Danny’s a wonderful actor. So Eve bleached her hair for the role and made ready. But someone changed her mind for her and the part was re-written for Elsa Lanchester.

When Olivia de Havilland began her movie career, she was thrilled to have Errol Flynn for her lover, cinematically of course. But after their third picture, with Flynn reputed to have pulled no punches in the clinches, Livvy pleaded for a change of face. It’s been ten years since Errol came within kissing distance of Miss de Havilland. And it’s safe to assume he never will again.

I’m just as sure that Errol will never again make a movie with director Mike Curtiz. His allergy to Mike occurred during “The Sea Hawk.” Curtiz, a fanatic for realism, offered the galley-master a bonus if he would flick Flynn’s ear with the tip of his lash, in the whipping scene where Errol was a slave chained to the galley. Mike wanted a real reaction from the then not-so-experienced actor. He got his reaction all right Errol jumped from the galley, chains and all, and chased Mike Curtiz off the stage!

You can safely bet anything you have that Clark Gable and Greer Garson will never kiss each other, or anything each other in any movie. “Gable’s Back and Garson’s Got Him!” I remember the ad excitement when Clark returned from the war, and Greer, then Queen of the Metro lot, grabbed him for “Adventure.” A better title might have been “Misadventure.” They never did hit it off. Some say it was because Greer wasn’t ready to work until 10 a.m, Clark Gable stomped on the sidelines, made up and ready to go from 9 a.m. But that I find hard to swallow. Greer is too conscientious an actress to throw a late curve at a fellow emoter. I believe the lack of lovey-doveyness was due to the difference in their personalities You don’t mix oil and water.

Yvonne de Carlo and Howard Duff are philosophical nowadays when cast in the same picture. But when both appeared in “Calamity Jane and Sam Bass,’ they suffered. A month before, Howard had given Yvonne an engagement ring. But the day before their picture started, everything was called off However, the show must go on and all that sort of thing. Funny to see them coming out of a how love scene, then turn on their respective heels and make a bee-line for their respective dressing rooms.

Same thing happened with Lilli Palmer and John Garfield during “Body and Soul.” Passionate love in the picture—just as strong indifference when beyond camera range. Lilli seemed to find John a trifle uncouth. He thought her stuck-up.

It was worse, of course, for Wanda Hendrix and Audie Murphy. They were timing the announcement of their separation for after the finish of their movie “Sierra.” But during a conversation with a reporter on the set, Audie slipped verbally. And the news was out of the bag and into the headlines. It was undiluted misery for Wanda to make love to Audie while her heart was breaking with love for him, plus the knowledge that everyone knew of the impending divorce. I think she was as brave in love as Audie was in war.

Linda Darnell will never make another movie with Cornel Wilde if she can help it. And she can. And on the other side of the man-woman scale, Cornel will never work again with Sonja Henie. Linda’s aversion to Cornel as a co-star began during their “Forever Amber” epic. Because Cornel was forever practical joking. Just before a love scene he’d suddenly appear with a phony mustache, or a carrot in his teeth! Linda was carrying a six-million-dollar production load. She was in no mood for horseplay.

I first met Cornel during his first picture, “Wintertime.” Miss Henie was riding high on top of the box office at the time. Cornel was a scared kid, bruised from a year of kicking around in Hollywood trying to crash the movies. “But the kicking I got from Sonja, brother,” Cornel reminisces. I’m sure Sonja wasn’t deliberately unkind. She just didn’t understand Cornel’s fine brand of sensitivity.

Stars who positively will not work in the same picture—Joan Crawford and Ginger Rogers. For obvious reasons. Joan Fontaine and sister Olivia de Havilland. Also for obvious reasons. Ginger nixes pix with former husband Lew Ayres. She almost relented once, then shelved the movie. But Paulette Goddard doesn’t mind working with any of her previous mates—including Charles Chaplin and Burgess Meredith. You can predict that Shirley Temple will never do another movie with John Agar. Jean Arthur has some pictures to make at Paramount, but no one is begging her to make ’em. Jean has temperament.

When Hedy Lamarr backed Victor Mature into a camera during “Samson and Delilah,” he said later, “I didn’t think I was going to enjoy working with her. But I told her firmly, ‘Let’s not have any more of that.’ And we didn’t. Now I like her. I understand her.”

Spencer Tracy and Katharine Hepburn do like to work together. But they didn’t at first, especially when Katie took a quick look at Spence and said, “Aren’t I too tall for you?” “Yeah,” cracked Mr. Tracy, “but don’t worry—I’ll soon cut you down to my size.”

And when you see it on the screen, it all looks so sweet, doesn’t it?