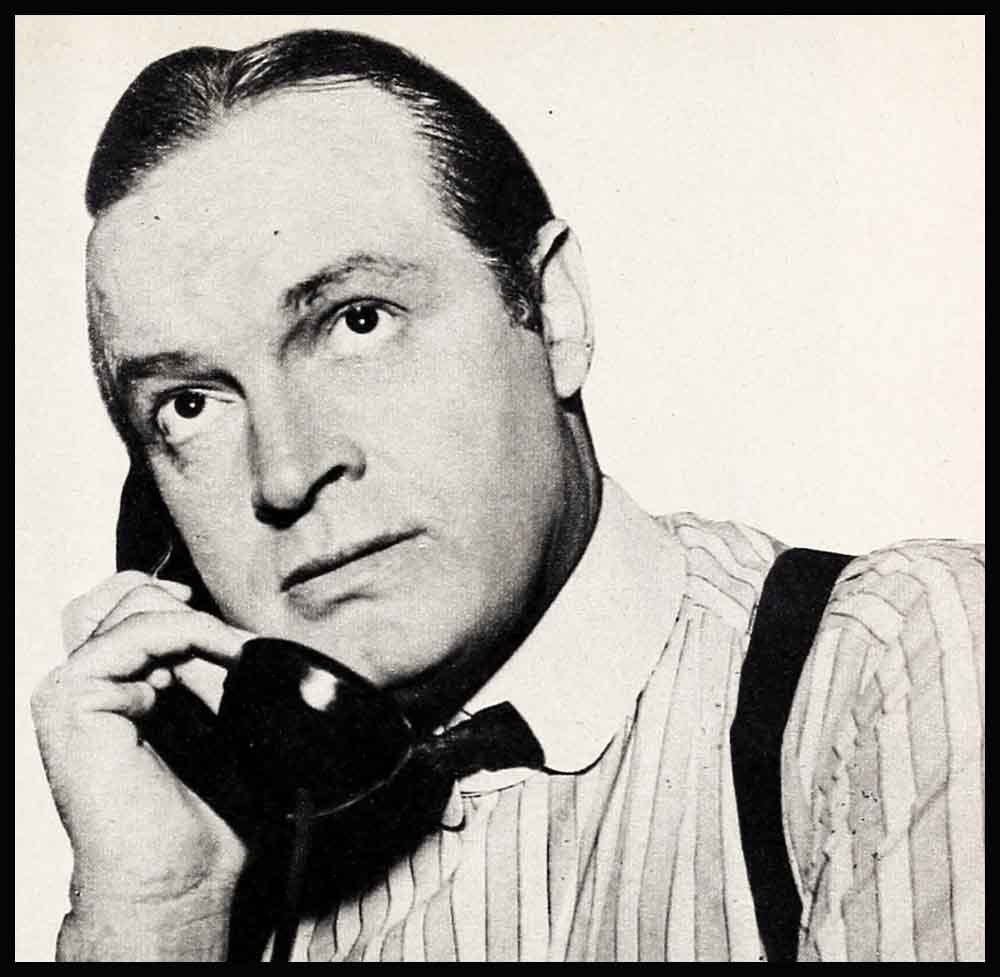 Before Bob Hope appears in the dressing-room door you know the circus is coming to town. You can hear the hubbub in the distance loud as calliopes. He enters jabbering over his shoulder to the parade of chums.

“Hi!” he chirps and goes to work shovelling guests out of mail drifts.

“I can tell where every letter comes from just reading the first line,” he boasts. He picks one at random and reads, “ ‘Will you do me the honor . . . ?’ That’s England. Formal with a heart of gold, good old England!”

He grabs another. His face blanks out and he does a double take. It’s in Finnish, a language in which Prof. Hope is obviously not at his best. He pulls a sleight of hand, takes a peek at the postmark and cries, “Finland, dear little Finland! Pays her debts and helps feed Hope besides, bless her heart.”

All the world feeds Hope and vice versa. It’s not just laughs he feeds them. He gives benefits from pole to pole—to feed blubber to Esquimaux, poi to Polynesians, politicians to starving cannibals. all the time, on and off, he gives. The giving not the gagging makes him Hope of the World. “My first New Year’s resolution,” said Bob piously, “is to quit picking on Crosby. After all, Bing’s getting older. He deserves respect.

“I am going to tell the truth on the golf course even if I play alone.

“I also resolve to drink more milk and give my head a rest. Rest more and give the nation a rest.”

Nation won’t stand for it. 150 visitors were on Bob’s set. He couldn’t get through the mob to confer with his writers. The pressure continues right through lunch hour. Bob eats in his dressing room. The telephone jingles constantly as though it thought it was Santa’s sleigh. Mrs. Hope calls and Jack Hope answers: “Bob is late getting off the set this noon, Dolores. Shall I have him call you?”

“No,” says Dolores. “Just tell him I called to give him his daily kiss and find out if he would be home for dinner.”

She has been married to the cherub fourteen years and still phones a kiss at noon.

Brother Jack takes care of callers and fan mail. They are heaped together on a davenport. You sit on the mail and it sits on you. A machine opens letters with the frantic speed of a buzz saw.

A Hindu emerging from the fan mail said he came to report on “Monsieur Beaucaire.” In Bombay theaters, he said, rows of white turbans rolled back and forth like foamy breakers in hysteric laughter. Basic Bob Hope is replacing Hindustani and ancient Sanskrit.

A Frenchman popped out of the letter-opening machine. Tangled in fan mail he got opened by mistake. “My wife, Meestair Hope, she laughs at you,” the Frenchman exulted. “It is a miracle!”

“Lafayette, we are here at last!” cries Bob. “La belle France, I love you.”

He seizes a photograph and signs it to a French war orphan he has never seen: “To Alain—Please laugh at me in France. I need the business.”

For the past six years Bob has been flying round the earth faster than it could waddle round its axis. This year he required a rest. He scooped up Dolores and the two oldest kids and went skyrocketing around South America.

“What a trip!” he cries, popping onto the arm of your chair with his snapshot album. He pointed out each snap with the eagerness of a Scout just back from the world jamboree. “That’s our reception in Montevideo. They know how to give a reception in Montevideo! This is Chile, wonderful Chile, and our Ambassador Bowers. What a guy. I sat in his office two hours listening to his stories. This is our consul in Buenos Aires, another swell guy. And here’s Rio. ‘Hi Bubby Huppy!’ that’s what they call mt in Rio. Everywhere else folks yell ‘Hi Bob’ but in Rio I’m ‘Bubby Huppy.’ ”

Humor is basic, Bob says. People everywhere laugh at the same things. “Such as politicians,” he adds.

“This is a great country,” he cracks.

“A poor boy can grow up and have his daughter sing in the Hollywood Bowl.”

But Bob succeeds where politicians fail.

He flies about knitting One World together with basic laughter. In South America our Latin chums want no dubbing of Bob into Spanish. They say they are learning American from him. Winston Churchill can go peddle his basic English to dinosaurs. Language of the world of tomorrow will be Basic Bob Hope.

The telephone is tingling. Bob drags it wherever he goes and keeps it under his chair. “They’re off and running,” he cries, picking it up. “Oh, just my brother hunh? Well where do you hide, creep? Why bother phoning me? Come on over and get hold of my ear lobe.”

Bob grew up with five brothers. This may be the reason he is so good at the give and the take. He is philosophic about life’s pressures.

“You have to go along with them,” he says. “If you jerk away, if you try to pull back, you are dead. Not just in this business. That goes for everything.”

How in the world does he stand the pace, old ladies ask. Well, he takes his vitamins, watches his diet, lays off likker and nicotine. Four years ago he quit cigarettes They hurt his throat.

“I have bowling ball tonsils,” he says.

The doctor wanted to cut them out.

“They’re not that bad!” squealed Bubby Huppy, squirming out of the doctor’s grasp. Now he consults the doc by phone.

He worries about his health but only so long as it takes to reach down under for the phone. “Doc, I can’t sleep,” he chatters worriedly. “I wake up two hours before I get to sleep nights. I think I have slow digestion.”

In disgust he slams down the phone.

“You got to be always watching the stomach for health,” he mutters. “And I do love that table. I’d be the fattest man in the world. I can’t afford that. I got a closet full of suits.”

He says that all he gets for lunch is weeds. “They call it chef’s salad.”

At the moment he is choking down a sandwich of turkey, chicken and ham.

“Of course when I have company for lunch I have to eat what they order,” he explains. “Otherwise they’d think I was trying to chop expenses.” He has company for lunch every day. Anyone ordering chef’s salad is not invited again.

“At dinner I go to town,” he exults. “Lamb with mint sauce, mashed potatoes and peas. And I polish off ice cream. I have a deep freeze unit full of Will Wright ice cream. I go for lemon pie too. Ma’s lemon pie drives me out of my mind.”

“Besides starving to death, have you any other cross to bear?” we ask.

“Ya. Seven-fifteen in the morning,” he says glumly. “That bang on the door. I’m an eleven o’clock guy. I can’t get over the New York habit.”

Radio suits him better than pictures because of the hours. Combining the two leaves no time for mike fright.

“It does you good to get scared,” he says. “I used to get the shakes before going on for a show on the stage. It steps you up. Now I rush on before I can think. You have to be in training doing two things at once around this factory. Pretty soon I’m going to lay the big stale body down in Palm Springs in the sun.”

Loafing he likes but it mustn’t be dull. Things got to keep moving, or Hope disintegrates. Bob says it’s malarky about comedians being sad Hamlets in person.

“It’s a wonderful life. all laughs. People liking you.”

He is lighter and fitter than before the war. For this he gives no credit to the abstemious life or regular hours.

He was wearing high yaller shoes with big bump toes in “The Paleface.” Pointing to the toe he said, “That’s where my wealth is stored.

Naw, that ain’t where it is, Bubby Huppy. It’s the heart of gold that gives out all the time. Scripture says you have to lose yourself before finding same. Bob lost himself in the crowd long ago. He and it are one. To each he meets he gives with vitality and cheer.

You meet Bob and you leave full of hope. . . . He’s even got the right name, that right guy. Hope of the World.