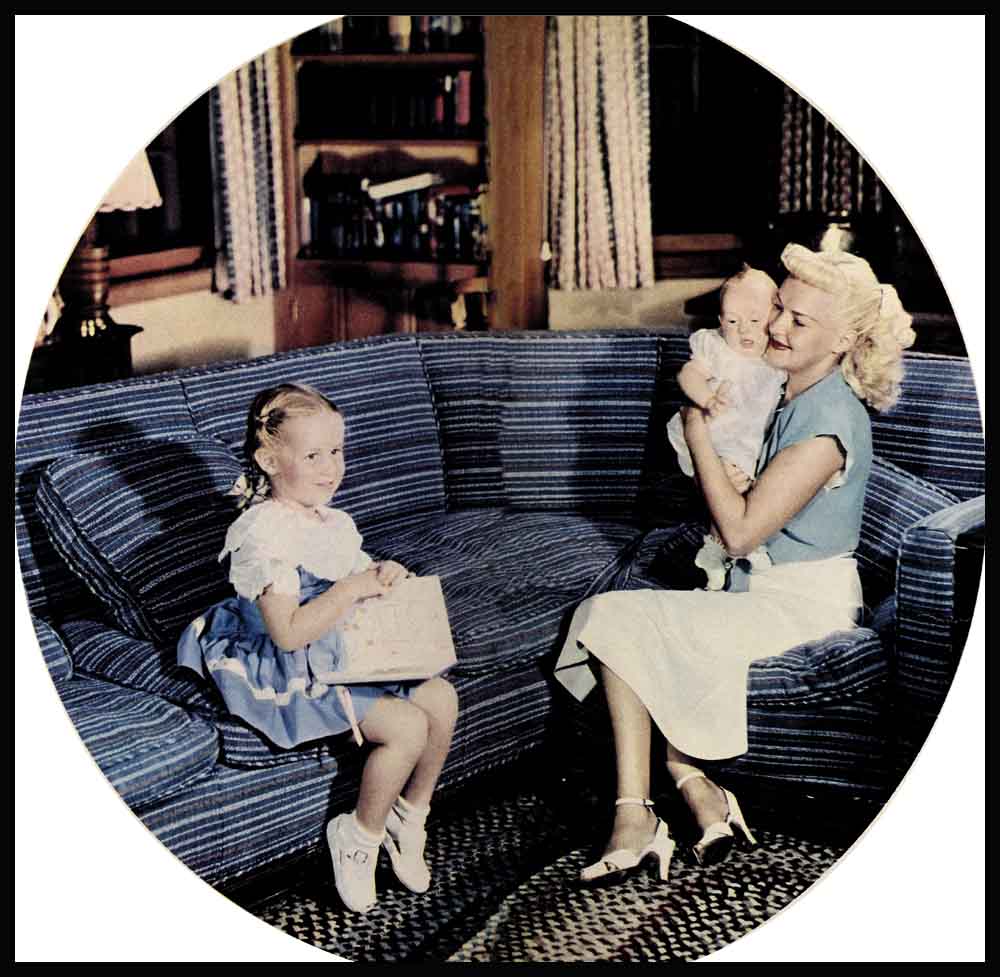 The horses were running at Del Mar. They always do in the autumn. And Betty Grable and Harry James were there to see them. They always are; because it is here, for six weeks every year—for the last four years—that they honeymoon.

Betty looked just as dreamy as a girl on her honeymoon ought to look. Her eyes were shining, her lips were smiling, her suntanned skin was in lovely contrast to her golden hair and a pink print dress wrapped her incredible figure. And Harry James, sitting beside her, had the same glow of happiness and health.

Del Mar, it is necessary to report, is not a place at all. It is a race track and luxury hotel situated about a hundred miles south of Hollywood. That’s all. No shops. No markets. And no toil. Del Mar is strictly for fun. The horses run every day except Sunday, while everybody watches. In between times everybody swims in the ocean or the hotel pool, plays golf on the club course, plays tennis, ditto, or croquet, ditto.

“I love it,” Betty said. “I love the races and I ‘love the people. Harry and I don’t care anything for night life. When evening comes we play cards or go to the movies the hotel runs. They’re from 1812 or thereabouts and they are really something. Otherwise we tum in practically at Vicki’s bedtime.

“She’s a wonderful little girl, Vicki; one of the best little girls I ever encountered. Harry and I can’t stand spoiled children and we’d tear into her if she were. But we never once have had to discipline her. Instead we tell her how good she is, how much better than other children with bad habits, and that makes her love to mind.

“She’s mad for her baby sister. She thinks Jessica is a doll and can’t understand why she cannot take care of her in the way she does her other dolls. Jessica was only twelve weeks old when w e came away on this vacation so the doctor advised us against giving her a change of environment. Vicki misses her nearly as much as I do. Every day when I phone the nurse, Vicki says, ‘Mother, ask Jessica why she doesn’t come down here.’ ”

Harry got to his feet. “Hey, let me out,” he said, grinning. “Shell never stop once she gets started on that subject.”

“My mother always told me I’d wind up with a musician,” she said. “But the break I’ve had in having my musician tum out to be a great man! I’ve so much respect for Harry. He’ll never be referred to as ‘Betty Grable’s husband’ but I’m often pointed out as ‘Harry James’s wife.’ And that’s for me!

“For that’s what I am entirely except for those brief moments I’m on the screen. I make two musicals a year. They’re hard work; take four to five months to shoot. But while Harry’s work continues to separate us for six months a year I won’t retire. The other six months we manage together, even though we’re working. And out of them always we salvage this six-weeks stretch when we don’t do a thing but play.”

A couple of very race-track looking characters came over at that moment demanding that Betty autograph their programs. That, at least, was the excuse. Their greedy eyes traveled up and down her as she signed.

She shrugged as they moved away. “It’s types like that that keep me from going on the road with Harry,” she said. “I wanted to sit quietly out back while he played. But just such people would shout for me to come and give a song. If I refused they said I was snooty. When I didn’t refuse they said I was trying to grab Harry’s act. So now I stay home.

“That’s why I was alone and Harry was across the continent when Jessica was born. She came five weeks ahead of schedule and I was scared stiff. We have a horse named Red Ear in our stable—we’ve got twelve all together—and he’s got the nicest brown face with a white spot on his nose.

“So, all I could think of with Jessica coming so fast was that Harry, who was back East where the horses were, must get to Red Ear and rub his white spot for luck. And that he did. Then I went to the hospital. I had a tough time. I always do. That’s why my doctor tells me I can only have one more baby—and not for an—other three years.

“Harry and I were sure this time we were going to have a boy—we still want one—and Vicki was very puzzled by our talk. She kept asking me what a boy looked like. I told her a boy looked as she did except with a mustache.

“When she heard that the baby was a girl, she asked, ‘Has she got a mustache?’

“When we finally permitted her to see the baby she broke me up, she was so wonderful about it. While I was in the hospital I’d received a lot of presents—little guns in the flowers and such things and I had sent them home to Vicki as presents from Jessica. So Vicki felt fine about her. Still I didn’t expect to see her instinctively lean down and kiss the baby and say, over and over ‘Mommie, she’s beautiful.’

“Jessica is a positively sensational baby. She’s tiny, but she never cries unless her bottle is late. She’s got a ravishing smile too. And she looks exactly like Vicki and not a bit like either of us. The same reddish blonde hair and blue eyes. Harry and I and both his parents and both my parents have curly hair. But Vicki’s is straight as a string and I’m glad. All my life I’ve wanted straight hair. Jessie’s is going to curl though.”

Betty paused and grinned mockingly. “They both have angel dispositions—which they do not inherit from me,” she said. “It’s Harry who is always calm. He gives everyone a chance. He says ‘Wait and they’ll be all right.’ Vicki has this same calmness.

“She has a terrific crush on her father. We put on a record with a trumpet part and she knows immediately whether it’s Harry or not. She loves all music, anyhow, and juke boxes fascinate her. She developed a big yen to play the trumpet, in imitation of Harry, but I talked her out of that. When she’s a little older I’ll let her study the piano if she wants to. For her own pleasure. Not with any idea of a career. Harry and I will let them decide. Plenty of time for that later. . . .

I was twelve when I started out here, doubling for Mary Pickford in ‘Kiki.’ ” She laughed. “And when am I going to quit? Well—I’m very grateful for being in the Top Ten and I’d like to stay around as long as that kind of luck holds out. If I had to depend on singing alone or dancing alone or acting alone I’d be nowhere. But with the three in combination I’ve been lucky in my career.

“Because of so much good fortune I thought I probably wouldn’t get a break with my marriage and children. But that has worked out too. I had a crush on Harry long before I met him. And after Dick Haymes finally introduced us it took me seven years to hook him. But I finally swung it.”

Betty laughed suddenly. “Before we were married,” she said, “I used to wear high pompadours, sensational hats and nail polish and the blackest dresses. Harry thought it was just fine then. But now I wear none of that because now he doesn’t w an t it—on me. He’ll look at some girl with a terrific hat and murmur ‘Doesn’t she look beautiful?’ I’ll ask, ‘Should I get a hat like that?’ ‘No,’ says Harry. So I go out and buy another horse instead.”

Betty pauses again and that warm unaffected charm that you feel from her on screen is twenty times as forceful at close range. The appeal those long legs of hers give her, the potency her natural sense of rhythm exerts, all are obvious.

But the real Betty whom, oddly enough, not many people know well, has much more than the sum of these assets. in a town where too much flattery turns too many heads, Betty has never taken herself as Heaven’s Great Gift to the World. The earthy commonsense she’s always possessed makes her say ‘Maturity is much better than pretending to be an ingenue. Why pretend that I’m not the mother of two children when I’m so very proud of that fact. Maternity has to stand for maturity. I’d much prefer people to say, ‘How young she looks for her age,’ than hear them whisper, ‘She looks a lot older than she claims to be.’ ”

Betty does not need to worry. She’s one of those rare, lucky women whose personal charm is so great that you never consider what the total of their years may be. For she carries with her an inner serenity based on a private life that is more important to her than any public acclaim.

What a girl! And what a Mama for Vicki and Jessica to remember.