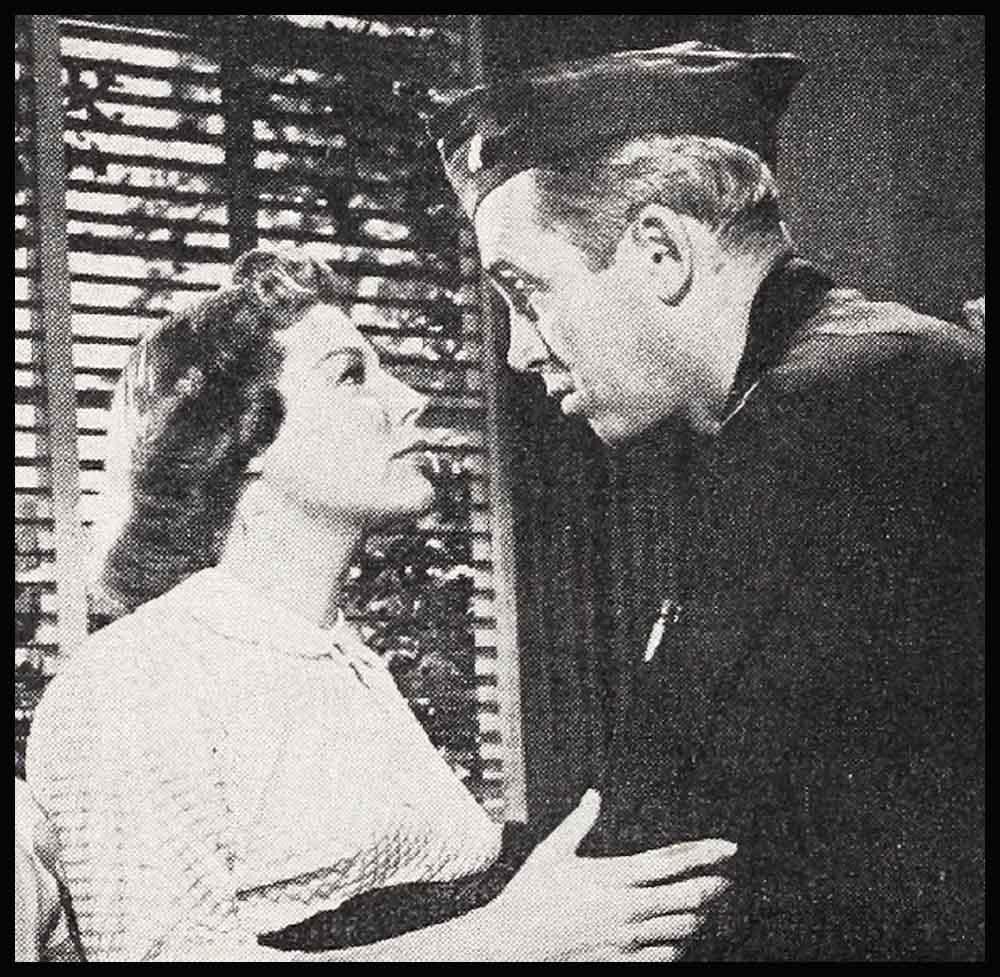 Here’s an offbeat Western, with leisurely charm and an unconventional accent on feminine characters. Greer Garson’s a doctor battling 19th century prejudice against female M.D.’s. Giving up the fight in Boston, she comes to New Mexico to set up a practice. Her skill and her sympathetic manner quickly win the townspeople, but she can’t overcome the antagonism of Dana Andrews, up till now the town’s only doctor. A brusque widower, he obviously regards his redheaded rival with mixed emotions. Lois Smith (the bedraggled slavey in “East of Eden”) gives a winning performance as Dana’s hoydenish daughter. A secondary love story teams her with Cameron Mitchell, as Greer’s younger brother. But Mitchell, it’s revealed, is a scoundrel, and his misdeeds abruptly switch the story onto an actionful tack. FAMILY

On the big Vista Vision screen, the majesty of this country’s air defense practically steals the show from stars James Stewart and June Allyson. As a reserve officer, Jimmy is recalled to active duty just as he is getting firmly established in a baseball career. At first resentful, he is soon overcome by awe and pride, realizing the full might of the bomber forces that stand ready at any moment to strike long-range counter blows if the U. S. is attacked. June, as his wife, waits out each of his trial missions and longs for the day when they can again have a settled home life. Effective portrayals are contributed by Frank Lovejoy, as the commanding general, and Barry Sullivan, as one of Jimmy’s superiors. Throughout, the human element is dwarfed by the huge planes, cloud peaks and endless air vistas. FAMILY

Love Me or Leave Me (M-G-M; CINEMASCOPE, EASTMAN COLOR)

One of the most unusual music dramas ever made gives Doris Day and James Cagney roles as startling as the picture. Doris, typed as a sunny-natured soul, showed real daring in choosing this strongly dramatic part. Suggested by the story of Ruth Etting, popular singer of the Twenties and early Thirties, the movie takes Doris from the hostess line in a cheap night spot to stardom in the Ziegfeld Follies and in Hollywood. It is Cagney, as a petty racketeer, who gives her career its start and becomes her manager. She accepts his sponsorship, but holds him at arm’s length. Pianist Cameron Mitchell, with personal interests in the matter, warns that her dishonesty will catch up with her. And it does. The atmosphere of the Twenties is sharply recreated, thanks in part to Doris’ versatile song-selling. ADULT

A vigorous, richly colorful adventure yarn of 18th century England presents Stewart Granger with a juicy role. He’s a gentleman smuggler, an elegant and thoroughgoing rogue. Towheaded Jon Whiteley, who was the older of “The Little Kidnappers,” is again utterly engaging, as a small boy who trustfully puts himself in Granger’s care. The boy’s “friend” shows no enthusiasm, but that doesn’t shake Jon’s loyalty—nor does the discovery that Granger leads a gang of murderous ruffians. As a titled and totally unscrupulous couple, George Sanders and Joan Greenwood capture the feeling of a cynical age. Equally striking are Viveca Lindfors, as Granger’s unhappy mistress, and Liliane Montevecchi, as a gypsy dancer who takes his fancy. FAMILY

Spectacular visual effects make this science-fiction thriller continuously absorbing, though the plot and characters are hardly subtle. Lofty-browed invaders from another planet, led by Jeff Morrow, draft scientists of earth to help them devise new methods of warfare. The visitors are civilized but dictatorial, so scientists Rex Reason and Faith Domergue attempt escape from the laboratory. But they are captured and whisked off to Morrow’s home planet, where they witness a terrifying space war. FAMILY

Fred Astaire and Leslie Caron make an irresistible dance-romance team in this new version of the beloved story. As a wealthy American, Fred provides a college education in the U.S. for Leslie, an eighteen-year-old French orphan. She isn’t told who her benefactor is and she knows Fred only as the uncle of her roommate (Terry Moore). But the two fail in love, in touching May-October style. It’s a movie happily removed from reality. with Fred Clark and Thelma Ritter arousing chuckles as the sorely tried pair who handle Fred’s business affairs. Dance numbers are plentiful, the liveliest being the “Sluefoot” routine at a college prom. FAMILY

The fascinating streets of Paris, filmed on the spot, come to the rescue of a murder drama that doesn’t make its points too clearly and sometimes strays into doubtful taste. As an American about to begin studying for the priesthood in a French seminary, Steve Forrest answers an appeal from a lady in distress. This is Anne Baxter, an obscure night-club singer with a tarnished past. She says that she has witnessed an underworld killing and is being pursued by gangsters who want to silence her. At first selflessly willing to help an unfortunate, Steve almost becomes emotionally involved. ADULT

Done with admirable simplicity and straightforwardness, this saga of heroism takes its inspiration from the true story of Rear Admiral John M. Hoskins, U.S.N., portrayed here by Sterling Hayden. Hayden loses a leg in World War II action, but stubbornly refuses to be retired from active duty, though he must fight Navy regulations. As his wife, Alexis Smith has the usual role assigned to the heroine in service films. Dean Jagger’s excellent as Hayden’s superior and friend. and Ben Cooper does a nice job in a brief appearance as a young sailor. FAMILY

5 Against the House (COLOMBIA)

Putting the emphasis more on tension than on plausibility, this film will hardly advance the careers of Guy Madison and Kim Novak. As Guy and three fellow college students are returning from vacation, a stop in Reno gives one of them a mad idea. Kerwin Matthews (an able and attractive newcomer) decides to rob a “robbery-proof” gambling house just for laughs—and then return the money. Alvy Moore, a clownish type, and Brian Keith, an unstable war vet, go along with the scheme; Guy and Kim, his singer sweetheart, are drawn in on it only by accident. FAMILY

A carefully planned bank robbery and its impact on the people of a modern Southwestern town are cleverly built into a satisfying suspense film. As Stephen McNally, J. Carrol Naish and Lee Marvin lav the groundwork for their crime, we meet various people whose lives will be affected by it. Richard Egan is the alcoholic heir to the local copper mine; Margaret Hayes, his neurotic wife; Virginia Leith, a nurse who falls in love with Egan. Victor Mature, an executive at the mine, and Ernest Borgnine, a peaceable Amish farmer, are both embroiled in the criminals’ getaway. Sylvia Sidney makes a small role count, playing a pathetic spinster.

A Prize of Gold (COLUMBIA, TECHNICOLOR)

A similar plot doesn’t fare too well on the other side of the Atlantic, either. Shot on location in Germany, this action film stars Richard Widmark as a GI who falls in with the plan of an English soldier (George Cole) to steal a shipment of gold bullion going by air from Berlin to London. Widmark wants the proceeds of the theft to help a group of war orphans cared for by his German sweetheart (Mai Zetterling). Nigel Patrick livens up the picture as a jaunty, homicidal RAF veteran hired to fly robbers and loot to England. Family