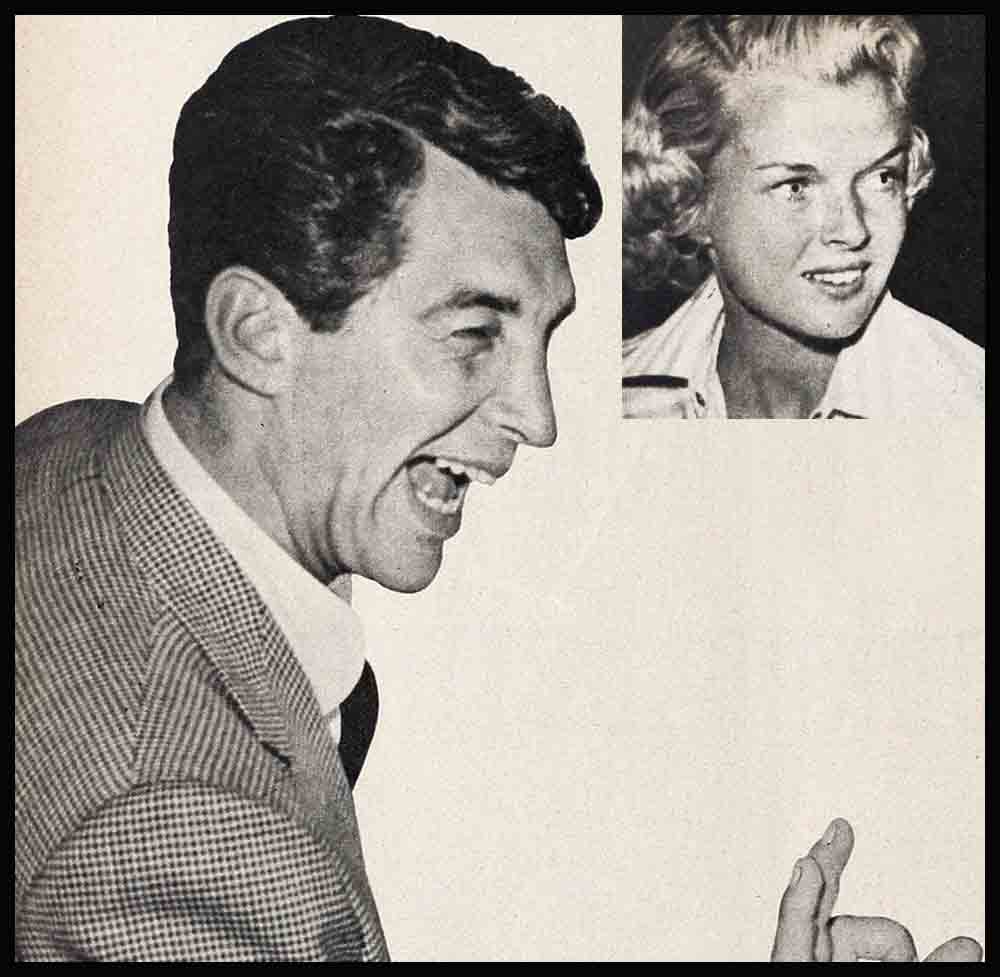 How I Trained My Husband

“But Dean, you can’t just tell your guests to go home because you’re tired! You’ve got to be diplomatic about it.”

“Okay, honey. Next time, I won’t mention a word about their leaving.”

That was several months ago. Dean kept his promise. And how!

Nowadays, when we have a party and he gets tired, he simply excuses himself, and a few minutes later, returns in his pajamas to say good night and to describe where his room is—in case anyone wants to come up and tuck him in. Usually they get the hint. . . .

Getting Dean to do things isn’t al ways as easy as I had hoped for when we were married at Herman Hover’s house in Los Angeles, on September 1, 1949. Just before the wedding, my mother had whispered, “Anytime you want your man to do something, just smile at him sweetly and he’ll melt.” How little mother knew Dean!

For two years I’ve been smiling at him, trying to make him eat more slowly, since I was afraid that if he didn’t, both of us would have ulcers by the time we were forty. Dean would, because of his eating habit; I, trying to keep up with him. But at last I found a solution: Instead of sitting opposite him at the table, I now put the TV set in my old place and switch on his favorite program. So dinner sometimes takes hours.

Reminding Dean of birthdays—including my own—is an everlasting task. Since I don’t believe in obvious hints, I decided on a more subtle technique: three days before my birthday I usually ask Patti Lewis to send me a birthday card, which I open at the dinner table. Unless Dean is too involved in the TV show, he catches on.

Dean is one of the few men who can cook well and likes to do it—when he has to. I am one of the few women who neither know how to cook nor regret that failing in me. Six days out of seven this doesn’t matter. But once a week, on the cook’s night out, it presents a problem. Particularly if Dean has forgotten and invited company for spaghetti.

The first time, I tried very hard to have everything ready by the time he and his friends got home. After cooking spaghetti for two hours instead of twenty minutes or so, it practically disintregated. I did little or better on the sauce which turned rubbery as bubble gum. When Dean came, I had but one alternative—break into tears. Promptly he fixed a delicious meal. I have successfully used that system ever since.

I haven’t always been that fortunate.

A few weeks ago our television set stopped playing, and I suggested Dean fix it. When he looked at me somewhat surprised I reminded him that “. . . any kid can do it these days. And you, a movie and television star . . .”

“Oh, sure, nothing to it.” And so he went to work. He experimented with tubes, wires, knobs and switches. After four hours—with no visible results—he gave up and called an experienced repair man who simply plugged it in!

Another time I managed to kid Dean into painting our house. In the process he splashed paint all over the roof, patio, chimney, window sills, dog and baby. While he was out after he had finished, I had to call the professionals to scrape off the paint, which cost us more than if they had done it in the first place.

There was the time when I thought a father should put up his son’s crib. Instructions that came with it certainly seemed adequate, and Dean set out with more tools than could have been used in constructing the Empire State Building.

First he put it up inside out. After a haughty, complicated reassembly, he had reversed the parts—but the sides kept sliding down. That adjusted, he put the finishing touch to the crib by inserting the mattress—and the whole thing collapsed. Luckily, for dinner we expected my brother, who has better mechanical aptitude. Otherwise the bed and the baby might still be on the floor today.

I haven’t been much more successful in influencing Dean to keep tidy. When we were first married, he dropped his clothes wherever he took them off, and left them. Our bedroom often looked like Macy’s basement after a sale . . . “Dean,” I pleaded, “wouldn’t it be nicer seeing just the pretty bedroom furniture intead of clothes flung ali over the place?” Gallantly he consented to help, and did—in his own way! Nowadays, to keep the room looking neat, he does put his clothes out of view—under the bed, cushions, lounge chair, stuffed into half open drawers, and once in a while, where they belong—in the closet.

Although a star himself, at times Dean gets smitten by a Hollywood actress, like any other movie fan. The latest “case” was on Jean Simmons, whom he’s never met. After seeing her in “Androcles and the Lion,” he acted like a fourteen-year-old high school girl who’s come to Hollywood for the first time and run straight into Tony Curtis. For two weeks, morning, noon and night, it was Jean-this, Jean-that.

How to get him out of it? Well, I started admiring Robert Mitchum. “What a build that guy has!” I would say. After I’d made him see three Mitchum films in one week, Dean stopped talking about Jean Simmons.

But once, my attempts to divert his attention from other females backfired.

When I first met Dean, about four years ago, I decided he had too many girl friends. With the exception of Jerry, his agent and his business manager, he didn’t seem to have another male friend in the world.

To correct that situation—and eliminate competition—I suggested he take up golf, which he did, reluctantly. Four years and several hundred rounds later he has lost all perspective about any subject but golf. All he talks about is putting, driving, teeing-off and so forth. He’s even teaching Dino, our year-old baby, to play with golf balls.

In self defense, I took up golf too. But I didn’t stop there. Today when he insists upon talking about the game, I start in about the outfits worn by the lady golfers. Sometimes it helps.

The secret of inducing Dean to do things, I learned, is to kid him into them.

Arguing will get me nowhere—simply because Dean won’t raise his voice, no matter what I say or do. Once I screamed —just to change his disposition. He just smiled back. “Anything wrong, dear?”

No, there’s nothing wrong with Dean—nothing that can’t be cured by insistent and constant wifely persuasion.