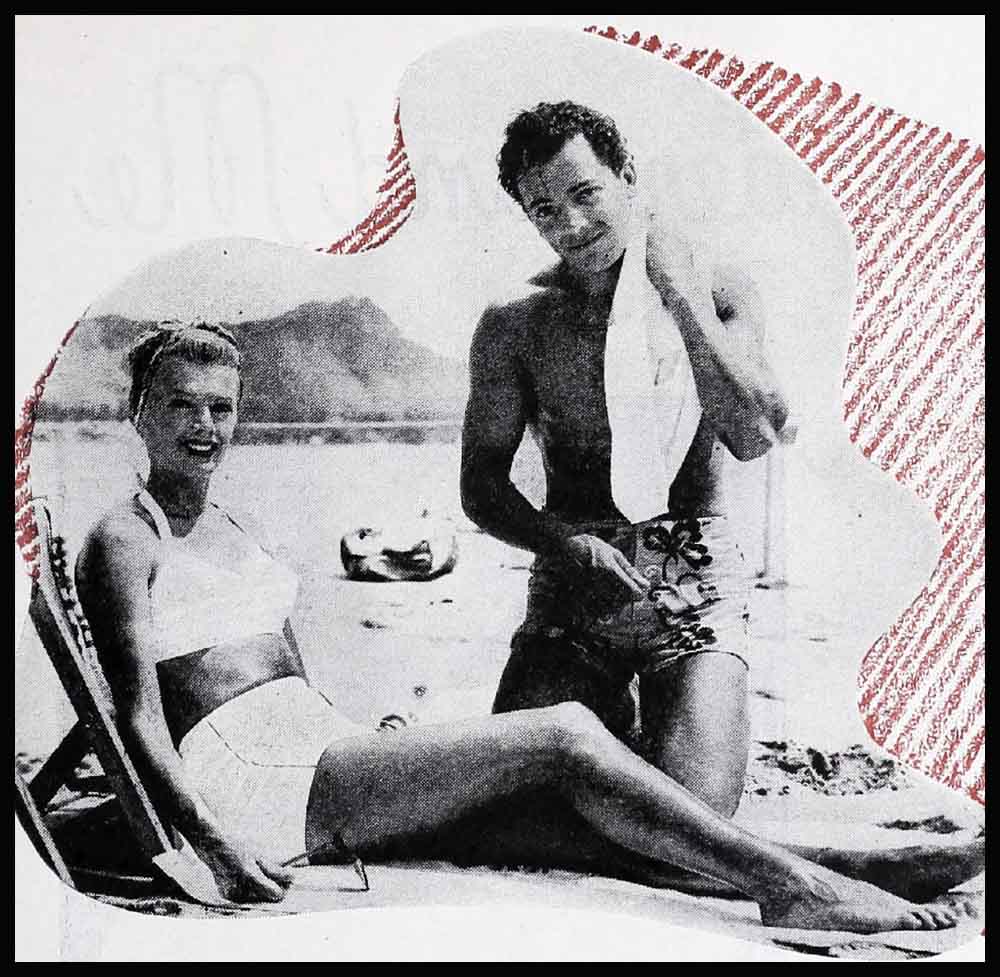 The Case Of Cornel Wilde

What has happened to Cornel Wilde? That there is something wrong is all too evident. Items, some blind, others using his name, paint his difficult temperament. You read that he and Pat Knight Wilde have separated. However, before you have time to digest this news, coming as it does on top of their public declarations of devotion, they have left for Hawaii and a reconciliation honeymoon. You read, too, that Cornel refused to appear in “Walls of Jericho.” And a few editions later it’s announced—but much less conspicuously—that he has curtailed his New York holiday to report at the studio for this very role. It all adds up to this: Items that make spectacular reading are given prominence, while news more favorable to Cornel, but less dramatic, is not played up in the same way. This makes for headlines and confusion and an inaccurate picture of a man suffering from a severe case of chip on the shoulder.

Those who remain Cornel’s friends—personal or professional—are unhappy and confused about him. But they are not, I dare say, nearly as unhappy and confused as Cornel himself. His life went into high speed so fast following “A Song to Remember” that he had no time to shift gears. Consequently, instead of being happy with his good fortune he’s still defensive about Hollywood and producers. He’s still fighting that old world that didn’t understand or appreciate him.

Take for example an incident at a recent party. Cornel was at the top of his persuasive form. His black eyes were shining, his black hair was tossing His voice was irresistible. He and David Selznick were in a corner. And Cornel was trying to sell Selznick the idea of buying his “Lord Byron” story with Cornel of course to star as the romantic poet.

“Can’t you see,” Cornel concluded enthusiastically, “it would be terrific!” Selznick shook his head and said, “Maybe—but I can’t afford it.”

“It isn’t so much the cost of the story,” interrupted the producer. “But I’d have to get you a top woman star and—”

“Oh, no, I could carry the picture myself,” Cornel is reported to have said.

“Look,” said David—he was now getting a little bit irritated—“even if you were Gregory Peck, I’d still have to get a top woman co-star.”

“Look,” said Cornel in turn—he did not like that “even”—“The only difference between Gregory Peck and me is that he started a little before I did.”

Selznick got up and walked away.

Cornel was not always as sure of himself or as cocky as he is today. And to understand and sympathize with the change in him, I go back to the first time I met Cornel, when he was getting his first big chance at a big movie—with Sonja Henie in “Wintertime.”

The year was 1943. Cornel had made only one previous movie—a quickie comedy, “The Perfect Snob” with Lynn Bari. He was fresh from Broadway where he had played Tybalt in “Romeo and Juliet” with Lawrence Olivier and Vivien Leigh. He still walked and talked as though Shakespeare was prodding him at the shoulder. He metaphorically took off his hat with a sweeping bow when he talked to you.

He was very easy to kid and how they kidded him! First Director Archie Mayo, then Cameraman Leon Shamroy. And above ali, when he was making “Wintertime,” Cornel was kidded by his leading lady, Sonja Henie. She was a great star then—Cornel was a beginner. To this day Cornel refers to that movie as “a tragedy for me.” It was—but how much of a tragedy he doesn’t realize. It changed him from a gay, trusting person into someone suspicious, self-centered and difficult.

When Cornel was trying to break into Hollywood no one would have him at any price. “Your head is too small for your body,” they told him at RKO. “You have too much personality!”—from Universal. “You are too dark”—from Metro, Paramount, Warners and Columbia. “You’re a ‘heavy’,” shrieked all the independent companies.

It’s a wonder really that Cornel wasn’t more egotistical when he finally did hit the big time in “A Song to Remember.” Put yourself in his place. Laughed at, pushed around, belittled for years, then bang, the movie-goers of America, particularly the women, shout, “Where have you been all my life?” Everything he told Hollywood about himself in the lean days comes true. He’s a big star.

So it’s Cornel’s turn to do the laughing and the pushing around. And, still defensive about the old days, he’s human enough to push even though it makes people a little sore.

When he and Pat were in Honolulu recently celebrating a reconciliation, for instance, he was difficult with the photographers. When he did pose he made such a to-do about which side of his face he wanted photographed that some of the boys said “Nuts” and went home.

It didn’t help either when Cornel insisted on having Pat in every shot and in every interview. But to us who live in Hollywood that’s an old story. Cornel’s adoration for Pat, and his devotion to her is really beautiful, although it lands him in a lot of scrapes with the press and his own studio. There isn’t anything he won’t do to help Pat and make her happy.

To get Pat into pictures, Cornel wrote her screen test himself and worked with her for three days for the actual test itself. That’s fine and no one minds—in fact they admire Cornel for doing it. But it was the continual thrusting of Pat and her supposed dramatic ability down everyone’s throat that finally made people angry.

Cornel has always been madly jealous of Pat, even before they married. Once when they were engaged they had a date to go to the beach together. Cornel was late, and arrived just in time to see Pat go off with another beau. In a jealous rage Cornel threw the beach bag at his rival.

One thing about Cornel—when he fights with anyone in Hollywood, he takes on the big guys—perhaps that’s why he seems more unpopular than he really is—the big guys usually get their version of the story into the papers.

Like when Cornel first refused to work in “Forever Amber.” It is a woman’s story. So Cornel went on strike—he said he was tired and he was. But the official version said that Cornel had okayed the script, then changed his mind at the last second. Actually Cornel hadn’t wanted to do the movie in the first place.

On the other hand few people know that a few days before he was to start “Forever Amber” a second time—this time with Linda Darnell—Cornel had a nearly tragic accident. He ripped off most of his right eyelid with a steel coat hanger. The doctor wanted to send him to the hospital right away, so he could stitch up the eye in the morning under anesthetic. Stitching up an eyelid cold is just about the most painful thing in the world. But that’s what Cornel made the doctor do. “I’m starting a picture tomorrow and I don’t want to hold them up by going into the hospital,” he said.

More recently it didn’t help Cornel with his studio when he refused to work in “The Walls of Jericho” just before it was about to start. “I need more rest,” said Cornel, just back from two weeks in Honolulu. That alibi seemed even thinner when Cornel, in spite of his supposed ill health, managed a quick ten days to New York with Pat for a hectic round of fun.

Oh yes, he finally agreed to do “The Walls of Jericho.”

It all adds up to this. Cornel is a nice guy, but he’s a little weak where he himself is concerned, and very much more where Pat is concerned. His early experiences in Hollywood have embittered him and given him a chip on his shoulder. But when he gets completely accustomed to his success—which many predict will increase with time—Hollywood feels that Cornel will settle down and allow himself to be himself.

It’s really a very nice self.