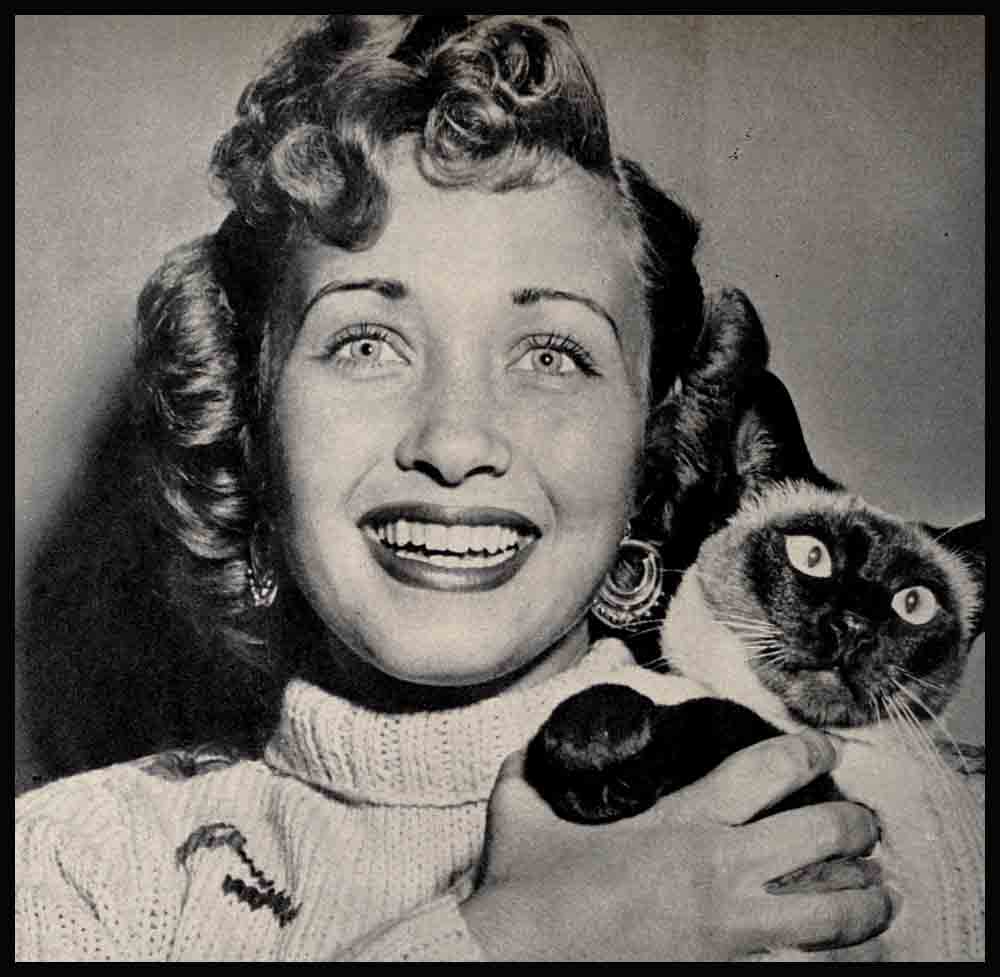 Opinion’s fairly unanimous that Hollywood movie stars are possibly the most pampered creatures in the world. That may or may not be the case. But the stars will tell you that there is one breed of beast who gets more attention, more kowtowing, more special treatment than they could ever hope for. Just ask the star who owns a cat. Or rather, who is owned by one.

In Hollywood, as everywhere else, once a cat takes over, she rules the roost with an iron paw. And anybody who doesn’t want to play the cat’s way might as well throw in the chips. Kitty’s Queen! And that’s that!

The divine right to rule applies to all cats—from the scruffiest stray to the highest-bred Persian. And their human subjects—from a Street urchin to Hollywood’s most glamourous glamour gal—seem to dote on being tyrannized.

The breeds are as varied as their owners. One of Hollywood’s most royally pedigreed pussies is Ramadhipati, who has condescended to move in with Greer Garson. Rama, as Greer calls him, has a penchant for motoring. And no matter how busy Greer is, she takes him out for a daily auto ride. But one day, her schedule was so heavy that she just couldn’t make it. She explained it all very carefully when she went off in the morning. And she apologized humbly.

But when she got back from the studio that night—no Rama. In the midst of a frantic search for him, a small truck pulled into the drive—and out stepped His Highness. The plumbers had been working at Greer’s house that day, and Rama had decided that if Greer wouldn’t give him his daily airing, he’d get it for himself. So he simply stowed away.

Jan Sterling has a Persian whose food tastes are strange even for felines, who are renowned for their finickiness about vittles. She won’t touch milk, and, completely unconcerned about the soaring cost of living, insists on heavy cream—or nothing! She gets it, and she laps it up languidly as a side dish to her two favorite solid foods—spaghetti and beans.

Jane Powell’s Siamese, Demi-Tasse, is a demon for dishevelment. When she can’t find enough confusion ready-made to suit her, she custom-makes it for herself. Her favorite trick is to get into an open drawer and strew the contents with happy abandon all over the house. One day, it may be hair ribbons, the next spools of thread. When Demi-Tasse has finished her little chore, the house looks like the streets of New Orleans the morning after Mardi Gras. And then Demi-Tasse surveys the effect happily, and lies down in the midst of it for a comfortable snooze.

Among the stars who own alley cats and adore them are Debra Paget, whose Turkey Bell lives peaceably with a pair of Siamese called Minx and Chinx; and the Gene Nelsons. who welcome any and all creatures—so long as they mew—and seldom seat less than a half dozen under the kitchen sink at dinner time.

Probably the most audacious of the “no-family-tree; who-cares” crowd is Henry, who rooms with Debbie Reynolds. Debbie speaks to him severely about the rashness of his warlike nature. But deep down inside, she’s very proud of his prowess. “Believe me,” she says, “there’s not even a dog in the neighborhood brave enough to tangle with Henry.”

Henry, a tremendous feline who fights like a tiger, roars like a lion, and at times even scares Debbie, recently conducted a full-scale one-cat war, in which he walloped practically every cat on the black. Debbie read him the riot act. “If you don’t behave,” she told him. “find a new home!”

Henry’s no dope. He knows when he’s well off—and living with Debbie is semething an awful lot of other cats (and people, too) would like. So, for the time being, he’s fulfilling his part of the peace treaty like a well-schooled international diplomat. But, like a diplomat, he’s no doubt treasuring the notion that treaties are made only to be broken.

Another push – em – around pussycat, whose antecedents were in the alley, is Booby Trap, the pride of Peter Lawford. He came into Pete’s life late one stormy night, when Pete found him curled up on his patio, taking shelter from the wind and the rain. “Poor pussycat,” said Pete—or something equally inappropriate. And he reached down to pick him up. But Booby Trap would have none of that. He wasn’t waiting for any cluck-clucking invitation to come in out of the rain. He had picked this house, and now all he was waiting for was the owner, please, to hurry up and open the door.

So Pete did. And Booby Trap made a beeline for the closet in Pete’s bedroom and settled himself in cozily. That’s been his headquarters ever since.

Booby Trap did all right for himself, when he picked the Lawford house as his port in the storm. He’s living the life of Reilly these days. Every night at ten sharp, he demands—and gets—a bedtime snack. Then he climbs into Pete’s bed. To Pete himself, he grudgingly allots a tiny, and carefully measured out area along the very edge of the bed. This is no doubt a dispensation which he makes to Pete for having had the good sense to open the right door at the right time.

Booby Trap has a lot of good reasons to be smug, for he is a creature cf great culture. He has a complete repertoire of tricks—including rolling over and playing dead—a doggy routine that most cats just won’t be bothered with.

Pete says, “Cats are not as difficult to train as people think. If they like you, they’ll do what you ask. But they are proud and self-willed. Cats can never be humiliated. They must be treated with tact, patience and understanding. You must never try to force them to obey you. And, above all, you must never show your temper.”

And cats will tell you that the same thing holds true for people: If you’re patient enough, you can teach them a trick or two, too.

Marge and Gower Champion have picked up some pretty pirouettes, indeed, from their brood, two alley cats—Flower and Clara, and three Siamese—Wicket, Real George and Real Gladys. Marge and Gower study their graceful movements, their leaps and their jumps, and thus get new ideas for their dance routines.

The cats pose one problem, though, that baffles the Champions. Like most cats, they scorn special beds—no matter how be-ribboned or be-catniped—and choose their own little corner to curl up in. It’s the corner this crowd has chosen that gets Marge and Gower—the back seat of an automobile. The Champions own both a Hillman Minx and a Pontiac. But the cats will have nothing to do with these plebian jobs. No indeed! Every night, five strong, they parade to the rose-covered garage down the lane, and settle themselves into the neighbor’s Cadillac. Now the Champions are beginning to wonder whether they should trade in both their cars for one swish model, just to keep their wandering elan at home.

Cat lovers know that you can’t be casual about what you cali a cat. Says June Havoc: “The name is very important. It should suit the cat’s personality. And it should never, never embarrass him.” No Poopsies for her, or Tweedledums, or any other silly frilly monickers. “If you call your cat Shaggy,” she says, “he’ll be stubborn enough to live up to it. And no matter how much you brush him, the maid will still mistake him for the mop and start wiping the kitchen floor with him.” On one point, she’s vehement: “Before you name him Billy, be sure he is a Billy, and not a Nellie.”

In Hollywood, cat names range from the whimsical to the downright dignified. Anne Jeffrey, who is married to Bob Sterling, has named her cats after operatic characters—Madame Butterfly, Tosca, Traviata, Pinkerton.

Ann Blyth calls her nine-year-old Irish Persian Mickey, because, she says, “the fires of Old Erin glow in his emerald green eyes.” And Jane Russell’s pair of Siamese are Ming and Buddha.

Liz Taylor dubbed the kitten a London waiter gave her, Tailspin. “One look at that sweet little mite,” she says, “and that’s what I went into.”

Ruth Roman’s mind took a romantic turn when she settled down to kitten christening. Her triumvirate are known as Marco Polo, Golden Bells and Lord Renfrew.

Gene Tierney calls her Maltese kitten Fifi, “because she’s like a flirtatious French midinette,” and Carleton Carpenter’s sleek black and gray striped beauty is Bugbee. But Carleton isn’t saying why.

Phyllis Kirk says it’s obvious why she calls her half-Persian Aldous Huxley. “He’s the intellectual type. That white mark on his face gives him a raised-eye-brows look.” And Suzan Ball calls her Siamese, Chata, because she thinks she’s a dog, and loves to ride in a car and loves to speed.” Which, if Suzan says so, is probably a lot of good reasons.

Anne Bancroft, who’s haunted by a cat called Dusty, doesn’t know how he got his name. And, in the center of a colony of cat worshippers, she’s audacious enough to admit that she doesn’t care. Dusty isn’t her cat at all. He just likes to pretend he is. He belongs to a neighbor—but this is a fact he prefers to ignore. He’s picked Annie for his very own—has made her home his, curls up on her lap and purrs at her adoringly. “So what can I do about it?” she asks, and she muses: “They“must have grown catnip on my family tree.”

There are always so many cats wandering around the Alan Ladds’ ranch, all mixed up with dogs and horses, that nobody ever can remember what they decided to call them all. Alan’s a softie for a kitten in distress, and distressed kittens always seem to sense it and head his way. Once on a vacation in Arizona, he came heme with a complete litter—because he happened on the scene when their insensitive owner was getting ready to drown them. And another time, he was attending some outdoor graduation exercises, when a tiny little stray limped across the entire field looking lonely and lost—until it get to Alan. Then it purred, and hopped up into his lap. And that was that. But one of his favorite stories is that of his latest feline acquisition:

“I was walking along the street when I saw a small boy with a huge cat. The boy was saying, ‘If you’re a he, I know that Mother will let me keep you.’ And then he sniffled. ‘But if you’re a she, gosh, I’ll just have to put you back out into the Street.’ He sniffled again. ‘And maybe somebody else will take you in.’

“Well, she was a she, all right. But the little boy and I made a deal: I traded him his she for one of a group of brand-new he’s I had at home.”

There’s one Hollywood household where the cat king gets a little competition. And that’s Marlon Brando’s. Marlon knows better than even to whisper the fact when Joe’s around. And he goes so far to conceal it, as to have special cat-food airmailed from New York to Hollywood. But the truth’s the truth. For years, Marlon’s true love has been Russell, his raccoon.

“Maybe Joe does know a trick or two that Russell doesn’t,” says Marlon. “But who else, I ask you, would adopt a raccoon?”

And you can’t deny he’s got something there. Who else, indeed?