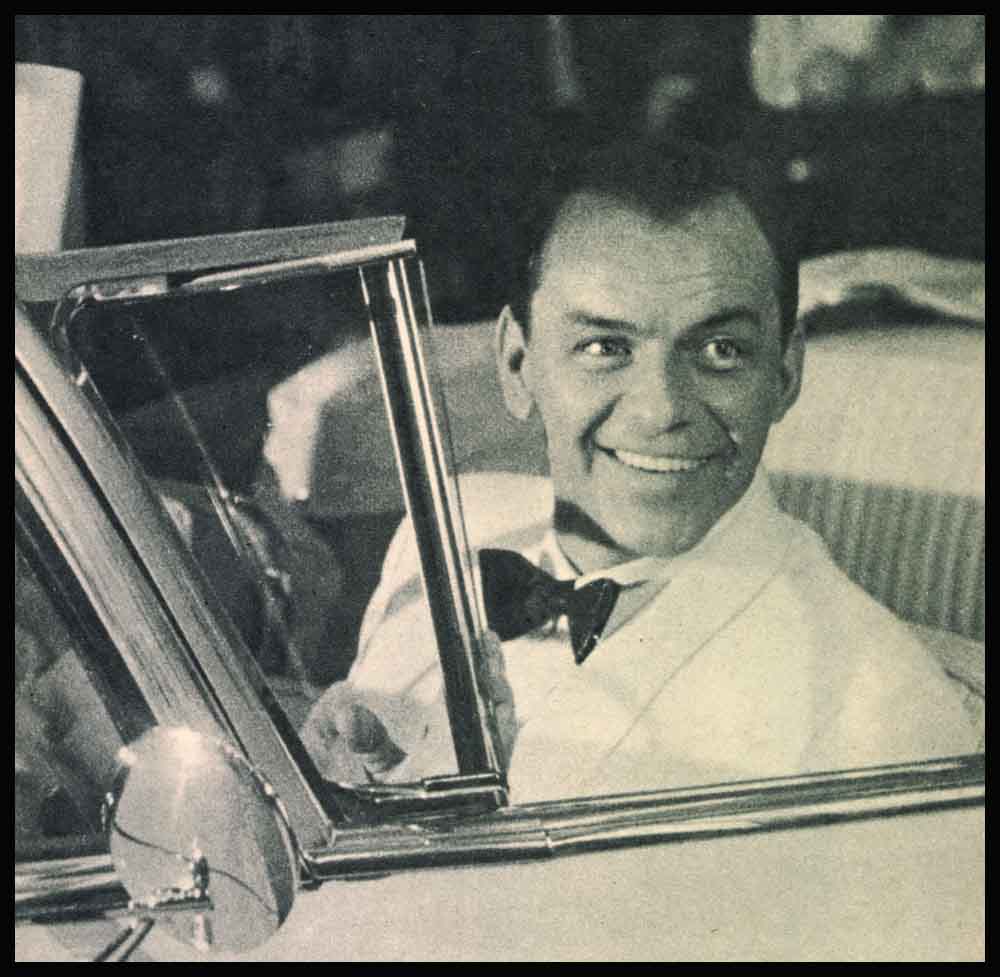 Wolves On The Prowl

THE BIG CAR SCREAMED AROUND THE CORNER, with more than its usual zip. The old gleam was back in its driver’s eye and his brows were arched with interest! Frank Sinatra, one of Hollywood’s most sought-after “wolves,” was on the prowl again. Who was the woman that day? Well, it doesn’t much matter. Tomorrow there will probably be another.

If there’s one thing that Hollywood’s single women can’t complain about it’s a man shortage. Movie-town is chockful of eligible bachelors who come in just about any size, shape, or form, each having his own particular charms. But getting and keeping one of these men- about-town may present real problems, even to an enterprising young starlet.

They all have broken hearts to their credit and the tally keeps climbing higher by the day! Who are these men, what makes them tick, why are they so devastatingly successful with women, and who are the damsels who have fallen the hardest?

At the time that we are writing this the wolves are out howling, but take heart — at any time the tender trap may spring

Another Hollywood male who seems to be particularly allergic to rice and old shoes is Hugh O’Brian. He is far from being allergic to women, however; or they to him. Hugh, without losing his rugged masculinity, knows that the right word at the right moment can go a long way and he is attentive to and appreciative of details from the color of her dress to the sparkle in her eye. Hugh enjoys variety — and his f r e e d o m , but Princess Saroya may have some other ideas on the subject.

Nobody can really predict how Glenn Ford’s “wolf” career will go. Glenn was married to Eleanor Powell from 1943 to 1960. He is most frequently seen with young Hope Lange, but Hollywood, look out! With his combination of boyish charm and suave manner this actor could have the female population at his feet.

WOLVES ON THE PROWL

Elvis Presley has been rocking the female population for the past few years with his looks and talent, but some of you gals may be glad to know that the tables are being turned. Instead of keeping cool it looks as if Elvis has got a problem or two (or three??) on his hands these days.

Just when it looked as if Elvis had really flipped for Juliet Prowse, Tuesday Weld began showing up in the strangest places — and with none other than Elvis! He’s a good catch and a fast runner, but if Juliet puts on her racing shoes there may soon be one less eligible in Movietown.

And speaking of lovely Juliet Prowse, what has Frank Sinatra been up to these days? What makes this man, who is not conventionally handsome or physically rugged, a modern day Casanova? His women, those who have loved him and lost, refuse to talk. He has some strange fascination for women that is not easily described. His magnetism keeps them flocking to his movies while in his personal life even the women he left are still loyal to him.

Loyalty is not one of the most prominent female characteristics, according to Rock Hudson’s experience. When Rock married his manager’s secretary, Phyllis Gates, he thought it was for real, but after a six-month absence (Rock was working on a film) Phyllis handed him his hat. It will take a smart woman to convince Rock Hudson that the fair sex is worth the trouble. Until then he’ll go it alone.

Far from having a playboy attitude towards women and love Edd Byrnes waxes serious and thoughtful when the subject comes up. He takes his acting career very much to heart and though he admits that he is very fond of Asa Maynor, more than any other girl, marriage is not in his immediate future.

These are just a few of Hollywood’s, perhaps the world’s most wanted men. The line-up goes on almost forever. There’s the still “teen-age” actor Sal Mineo, who has that old-world charm and a lively wit. He has flipped over all types at one time or another — tali, cute, and cuddly, sophisticated and chic. But he’s not going to tie himself down.

Hollywood’s blond Adonis Troy Donahue, is unusually intelligent and intense. He earned the reputation of being “Movieville’s Number 1 wolf” and even his kid sister couldn’t help agreeing. He was so definitely out of the marriage market that it was funny even to think of it. If what his ex’s said was true. his women had to watch out! Where there’s smoke there is usually fire and the signals read “fickle and restless” for Troy! But what about Lili Kordell?