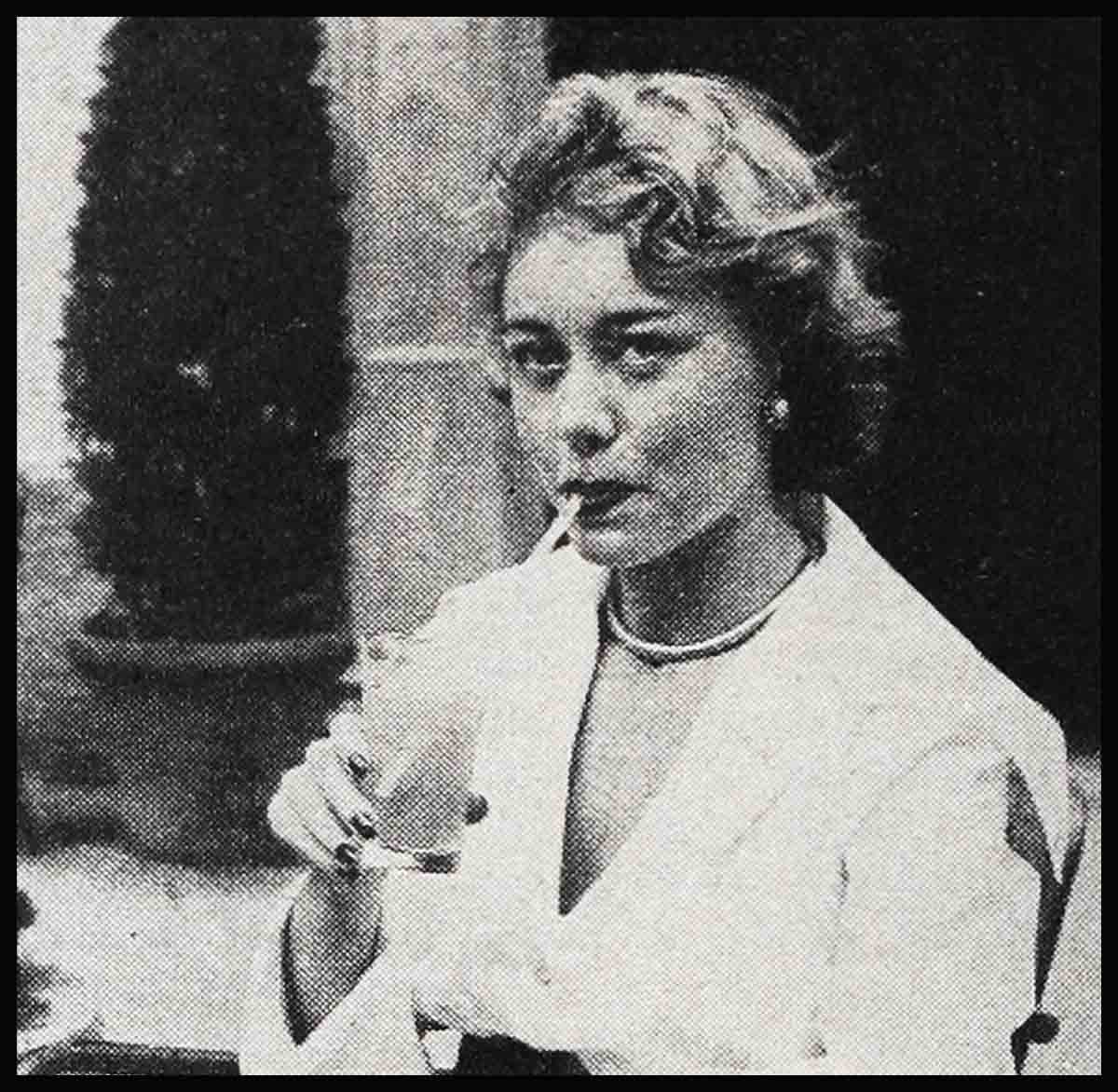 High-pitched, husky, haunting voice . . . eyes that are almost slanted . . . provocative mouth . . . these have made Glynis Johns a distinctive personality to moviegoers. But Glynis takes a disparaging view of her own appearance. “I look like a frog! In fact, Dick calls me Froggie.” “Dick” is Richard Todd, her co-star in “The Sword and the Rose.”

In February of 1952, she acquired an American husband, David Foster, a young businessman. David, too, has a cosmopolitan background. He was born in England of American parents, and brought up mostly in England. His path crossed with hers at least once while they were children. “We went to the same Sunday school,” Glynis says, “but we don’t remember each other. David’s sister remembers me, though—I used to wear a terrible pixie hat that she loathed!”

Glynis’ closest friends, of course, belonged to her own world. Stewart Granger was among them: “I’ll never forget how nice he was to me when I was fourteen, new in pictures. I know his moods; he’s almost a brother.”

Glynis had just graduated to grown-up roles with “The Invaders,” when, at eighteen, she was married to actor Anthony Forwood. Their son, Gareth, was born the following year. But the usual hazards of a youthful marriage were too much for the couple. Wiser now, she can see them in retrospect: “After all, you’re one person at one age—and an entirely different person at another.” Within five years, the Forwoods were divorced.

Briefly, Glynis later found herself attracted to Michael Wilding, while he was sharing a yacht with Granger. Mike, too, is now simply numbered among her old friends; she likes him for his easygoing, even-tempered quality. Jean Simmons joined the circle as Mrs. Granger, and Glynis was the couple’s house guest on a visit to Hollywood. Both girls enjoyed the outdoor life there; they’d put a stack of records on the player and swim to music. “We practically perfected an Esther Williams stroke!” Glynis laughs. More seriously, she makes only one comment on the gossip-haunted Granger marriage: “They love each other very much.”

The next time Glynis herself thought she had fallen in love, she was naturally more cautious. She became engaged to the noted English producer Anthony Darn-borough. It was lucky that they didn’t rush into marriage, for through her dates with Tony real romance entered Glynis’ life. At a party given by a friend of his, she met her forgotten Sunday-school acquaintance, David Foster. About that time Glynis and Tony broke their engagement, but they remained good friends.

Then David, an executive with the Colgate-Palmolive-Peet Company, returned to New York. The new romance might have ended right there, if the Broadway theatre hadn’t played Cupid. Glynis got an offer to star in New York and promptly accepted. “But I wasn’t really planning to get married,” she says. “When I left, Tony cabled David to look after me!”

David followed instructions. Midway in the play’s one-week New York run, Glynis became Mrs. David Foster, and the English actress began turning herself into an American housewife. But both she and David recognized Glynis’ career as an essential part of her; there was no thought of giving it up. Her first good offer was from Walt Disney, for “The Sword and the Rose,” to be shot in England. It was too choice to turn down, and three months after their marriage the Fosters again found an ocean separating them—for part of the time, more than one ocean. As export manager, David was sent on a tour of Central America and the Far East.

Their future looked disheartening—and then, suddenly, everything was fine. This time, it was David’s company that played Cupid. He was transferred to the London office! Glynis insists this was all a coincidence. But David’s father, who is chairman of the board, just might have intervened. Married a year, the Fosters were honeymooners in terms of time spent together. Now they could settle down and get better acquainted.

Happily, movie producers also proved cooperative with true love. Fans were pleased to hear that Glynis would team with Todd again in Disney’s “Rob Roy.” But it was the off-screen teaming that delighted her. British-made, the forthcoming picture didn’t take her away from her husband. “Now we’re together!”