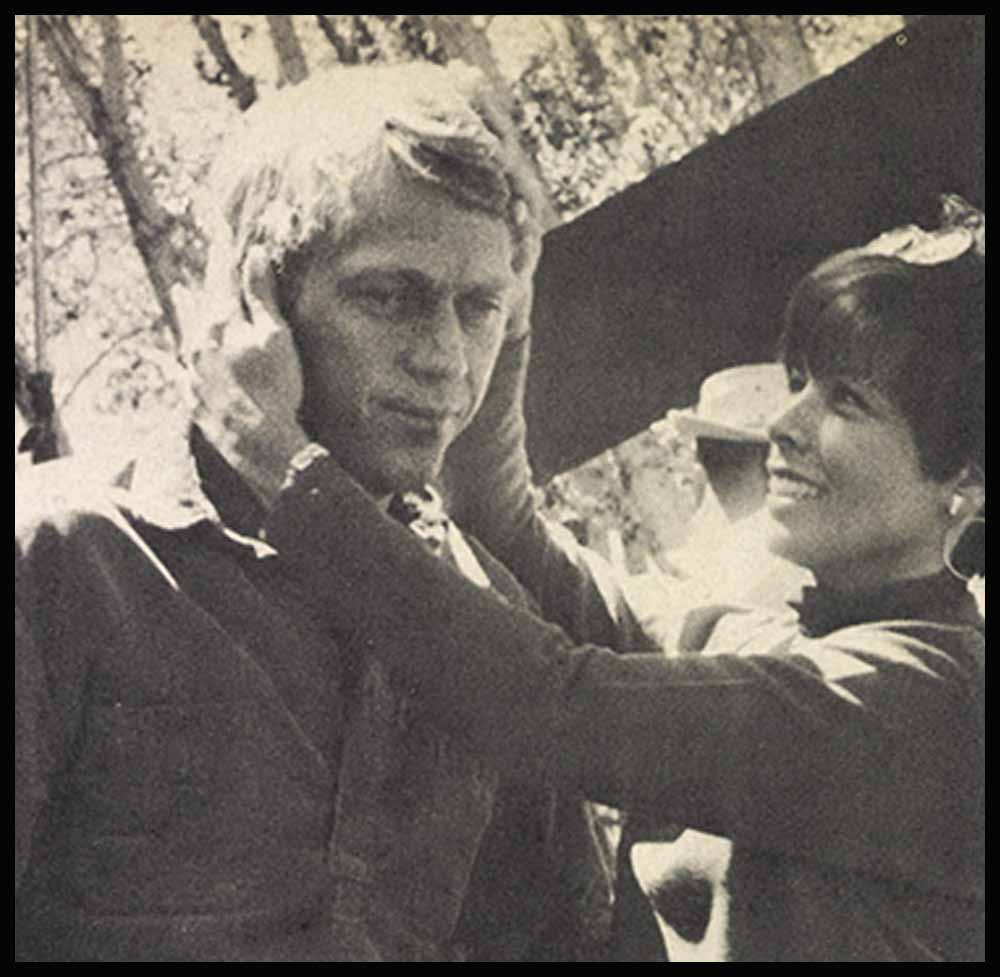 The Most Faithful Lover In Town

Steve McQueen is of a rare breed. Underneath his tough crust, jazzy lingo there’s a man who has more respect for his wedding vows than the more polished Hollywood hero. Steve never veers from the straight and narrow path unless he takes a spill on his motorcycle because, no matter how tantalizing his leading ladies may look, there’s no one he’d rather gaze upon than his pretty, pixy wife, Neile Adams, pictured with Steve left of center. His opinion of her hasn’t changed since the night he first spotted her in Jim Downey’s Steak House. He was there with some other Broadway actors from Hatful of Rain when “the cutest dark-eyed doll l’d ever seen bounced right toward me, laughing right on past.” Steve, being a man of action, knocked over a couple of tables catching up with her. Then he introduced himself and asked if he could ask her out sometime. Neile, who was dancing in Pajama Game at the time, thought why not? Their first date was spent zooming through the streets of New York on Steve’s motorcycle—Neile had never been on one before—and they were a team from then on. He depends on Neile more than one would imagine. “My old lady,” as Steve affectionately calls her, “is the heart of my home.” If he goes away on location Neile always joins him. This spring they’ll be off to the Orient, where Steve will film The Sand Pebbles for 20th.

Only once was there gossip about the McQueen marriage. A famous columnist tried to drum up something between Steve and Natalie Wood when they filmed Love With The Proper Stranger. The spirited actor was so outraged with the ridiculous accusation that he demanded, and got, a prompt retraction. Steve proved how much Neile meant to him when he gave up car racing a few years ago. Seeing the fear written on her face, he knew he’d have to find a less dangerous release for his pent-up emotions. Faithful Steve didn’t look for that release in other women, as many men do, but in racing his motorcycles and doing challenging acting roles.

Steve was a brooding, resentful kid until the superintendent at Boys’ Republic “made me understand what made me the way I was . . . and what I could do about it.” The 5’11” 170-pounder was born in Slater, Mo., March 23, 1930; 2 yrs. later his mother (who died last Oct. 15—Steve rushed to her bed- side) left dad and took him to live with his great-uncle on a farm. Steve knocked himself out doing chores, hating the days at his one-room schoolhouse. At 15 he sailed to foreign lands, then lived the life of a N.Y. beatnik, not really belonging until he took up acting. Gradually, his fans and Neile “made me a regular Beau Brummell.”

THE FAST LIFE OF STEVE McQUEEN

1- When a girl told him he’d make a great actor, he laughed but wound up studying w. Sanford Meisner, then won reputation w. Actors Studio and in ’56 replaced Ben Gazzara in B’way’s Hatful of Rain (w. Vivian Blaine).

2- This racing car was Steve’s baby. After doing competitive racing (winning his share) he gave up sport a yr. ago and races his cycles instead. “I can’t give up the fast life.” He fears old age.

3- In ’63 Steve engaged Bobby Tucker to teach him one note from the other so he could play his guitar and sing in Baby, The Rain Must Fall. His best times, however, are spent w. his family—“fishing, hunting, enjoying peace and quiet”—in Big Sur, where he owns property.

4- Hatful closed; Neile had left for H’wood and Steve was lonely in N.Y. without her. So after one last fling in Cuba he cycled cross-country to marry her—Nov. 2, 1956. The 1st year was rough (2 careers had them separated often) but ’58-’61 saw Steve as bounty hunter Josh Randall in TV’s Wanted—Dead Or Alive (w. Wright King).

5- Before their family began to grow Steve had no objections to Neile’s career. They’d kiss good- bye as they zoomed off on different courses. Now he says, “I don’t want to be selfish, but I don’t know what l’d do to wake up in the morning and find her gone.”

6- Steve visits Chino (Calif.) Boys’ Republic, the reform school his mother sent him to when she remarried (Steve threatened to kill stepdad); he left there when he was 15, but for the past few yrs. returns to talk with the boys when he presents his annual Steve McQueen College Scholarship to lad with highest average.

9- Since this pic was taken in 1963 by Life photographer John Dominis, Steve has refused to allow pictures taken of his two children—dtr. Terry, 4 here, son Chad, 5. He absolutely adores them and makes a point to give them the love he lacked as a child. He hates to put on tux or tie but often gives in.

10- Steve, who says he lives “the off-beat character but not the way-out,” must be living right these days, for his Nevada Smith director, Henry Hathaway, says, “Steve’s the greatest of the young crop.” He’s even taking extra pains to make this Steve’s best picture.

14- The Honeymoon Machine, ’61, an MGM hilarious comedy about sailors on a spree with two girls (Paula Prentiss, Brigid Bazlen) and a machine.

17- The Great Escape, ’63. McQueen, center, starred with James Garner, left, in this thriller about a mass breakout from a German compound.

19- Love With The Proper Stranger, 1963. Was one of Steve’s best parts. He and Natalie Wood won acclaim for their often touching performances.

22- Nevada Smith, 1966, Paramount. Wasn’t all smooth going for Steve. While shooting it out, Steve escaped—bruised—the onslaught of 300 head of stampeding cattle by jumping onto a nearby fence post.