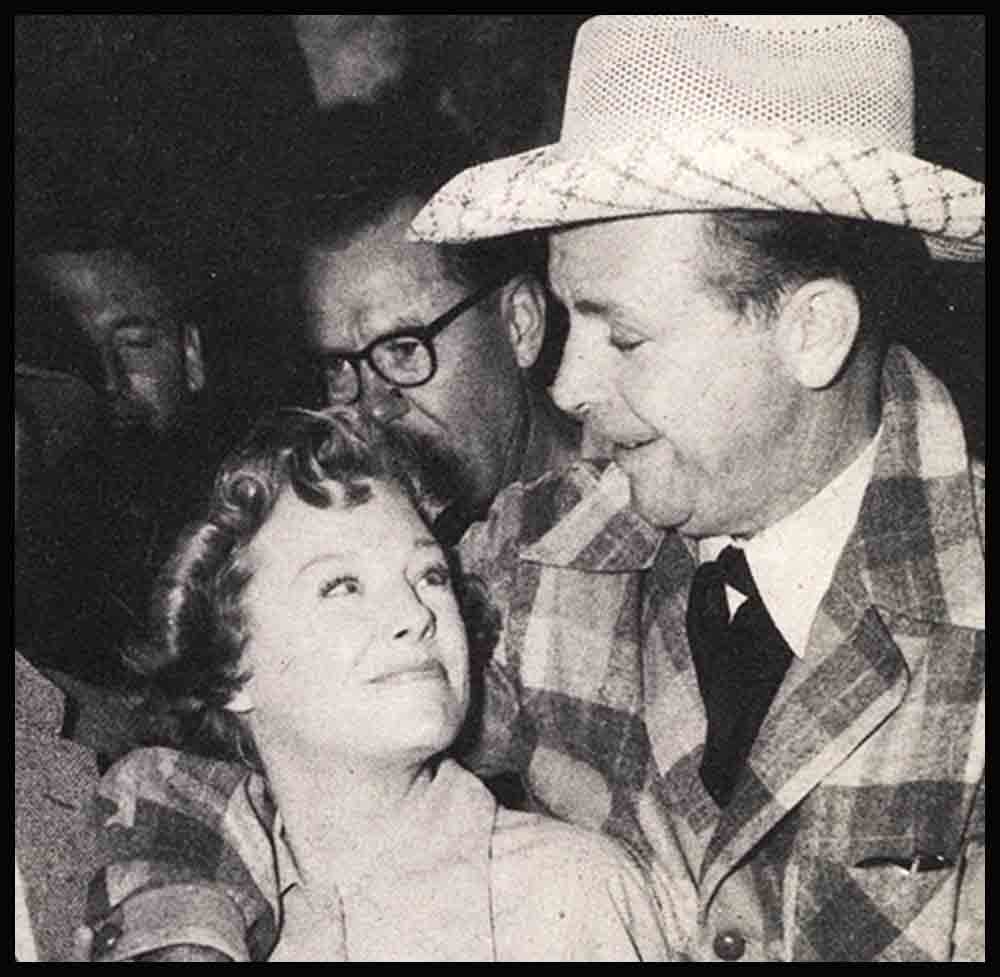 “Did he (Dick Powell) ever hit you?” asked the judge trying to get to the root of the trouble.

“Never!” snapped June. “He could never do a thing like that. It was just that he was always too busy.” (She didn’t say what he was too busy for.)

On January 31, 1961, she won an interlocutory decree which, in California, means that if hubby and wife cease and desist living under the same roof for one year, they are, at the termination of said period, kaput!

The decision made June very happy. And that evening, by way of celebration, she and a date really did the town. After a whirlwind round of many of cinema city’s favorite eating and watering spots the wee hours of the ayem found them at Junie’s front door.

Two minutes later they were inside.

Neither was seen until the morning.

And who was the guy that June celebrated her divorce with? None other than Dick Powell, the hubby she had jettisoned that very afternoon. But the minute they set foot in the same house the ex-hubby became the ever-present hubby once again.

The public first got wind of the fact that all was not well at the house that Allyson and Powell built about seven years ago.

It was the night of the Photoplay Awards and the banquet room at the Beverly Hills Hotel was jammed to capacity with the greats, the near greats and the ingrates of Hollywood.

Some had come to receive awards, others had come just to be seen and still others were there for no other reason but to gawk.

Dick Powell was there too. And, as a Hollywood star of long and good standing, he was asked to say a few words. The one-time musical comedy favorite made the usual thank-you comments and then snapped the big room to attention with a remark no one had anticipated.

“For those of you who were worried,” said he, “everything’s okay again at the Dick Powells.”

IT CAME out of the blue. Some of the people who were retrieving their jaws from the vinicity of their knees had no idea there was or ever had been anything wrong with the Allyson-Powell merger. Others, however, knew that Dick had a problem with his petite, five-foot-nothing, goodie-goodie blonde mate. They knew too, that Dick had been getting her out of tangles with other men for the better part of their married life. But this was the first time they had ever heard Dick even hint that the marital knot wasn’t as tight as it could have been.

But then, what could he have said? He was stuck with the image of June Allyson that the Hollywood press agents had created. She was typed as “the girl next door,” “cute as a button,” “too nice to be naughty,” all sweetness and light.” Why, if he had even hinted that sweet little Junie was a man-chaser from way back, her fans—and they number in the millions—would have howled their heads off at the charge and, in the end, made him the “heavy”.

But what those fans—and a lot of the hipsters in Hollywood—didn’t know was that June had, long ago, pushed the sugar bowl aside and reached for the spice shelf.

It even reached the stage where she was admitting it. (Sitting at a cocktail table with a few other Hollywood beauties, she flipped a pretty finger at the little-girl frock her bosses like her to wear and declared: “I’ve had enough of all this. I’d like to land in the middle of a nice juicy scandal—just to prove I’ve graduated into a woman) but no one was believing her.

BUT just so no one would think she was a doll given to idle chatter she set out to prove there was a lot more to June than a goodie-goodie personality and a Peter Pan collar.

And the first guy she proved it with was the old swinger himself, Dean Martin. Rumor has it that he was even sober at the time.

Junie first met Dean when he and his zany ex-sidekick, Jerry Lewis, were appearing at Slapsie Maxie Rosenbloom’s in Hollywood.

After the meeting, June became a regular ringsider at the club night after night. And she finally capped the caper by going right along with Dean when he moved from Hollywood to a nightery in Las Vegas. The citizens of that so-called sin-suburb are supposedly used to anything, but their raised eyebrows, as they watched June and Dean rocket around the town, proved that the Las Vegas natives weren’t as blase as they were cracked up to be.

As one gossip columnist itemed it, “Dean Martin and June Allyson are having a ball in Vegas where they’re spinning faster than the roulette wheels.”

Mr. Powell did a lot of hollering about this secret romance that the tabloids made public, and the betting around Hollywood was two to one that Junie would be given her walking papers. But it never happened. Dick may have been sore but he wasn’t sore enough to call the whole thing off. Just what he had to say to Junie when she returned from her Vegas adventure isn’t known but whatever is was she couldn’t have paid much attention to it because it wasn’t long until she strayed from the reservation, without reservations, again.

Tapped to star in The McConnell Story June took one look at her handsome leading man, Alan Ladd, and was off to the races.

NOW there’s no denying that when an actor and an actress are making a movie they have to spend a lot of time together. But usually when the movie is finished so is the relationship. But that was not the case Where June and Alan were concerned.

And to prove that Dean Martin wasn’t the only guy June would leave town for when Alan took off for New York Allyson was close behind.

During this Gotham safari a friend met Dick Powell outside Hollywood’s Brown Derby.

“You mean Stupid?” Powell snapped. “I don’t know how Stupid is. Ask me another.”

This was all Dick said publicly about the affair.

Sue Ladd, Alan’s wife of 13 years, however, took a more active stand. She walked out.

For weeks the gossip columns hinted at all sorts of explosions but once again June came through unscathed. What saved her was when the Ladd’s patched things up, for perhaps the oddest reason any marriage was ever rescued. Alan came down with a case of chicken pox and called his ever – faithful, but estranged wife, to help him. Sue not only got rid of Alan’s pox, she got rid of the chick too.

About that chapter in her life, June recently had this to say, “About five or six years ago there were many items in the columns linking me with Alan Ladd. What actually happened was that he was having problems, and I was sympathetic. Because of the nonsense in the columns Dick and I stopped seeing Ladd. Funny thing, he was Dick’s friend, not mine.”

By this reasoning Jack Lemmon must have been Dick’s bosom buddy.

After the Ladd affair, Dick decided that a short leash on June was in order. And he figured the way to keep that leash tight was to spend more time with her. And how best to do that but to direct her pictures.

So he got himself the job of director on A Night To Remember starring June Allyson and Jack Lemmon.

He soon found out, however, that his presence on the set didn’t slow Junie down even a little bit when halfway through the shooting she decided Lemmon was her favorite flavor.

“When they (June and Jack) were on the set, the phonograph in her dressing room would play for hours while the two of them were in there,” one of the co-workers recalls. “They must have been talking, because that dressing room was too small for dancing.”

Treating Dick like the little man who wasn’t there, June and Jack openly held hands, sat together and gazed into each other’s eyes like love-sick teenagers. Dick held his temper as long as he could but finally, when Jack flubbed his lines, he blew up and told him what he thought of his acting.

June leaped from her chair and flew at her husband, screaming, “Don’t you dare talk to him like that!”

The movie making ended on a note that was becoming familiar to the Powells in general and June’s playmates in particular. Lemmon and his wife got a divorce. They didn’t say why, which left the matter open for the gossips to have a field day.

Once again, however, the Powells weathered the storm.

And maybe this is because June’s man-chasing comes as no surprise to Dick. After all, didn’t she actually chase him. Wasn’t it she who insisted that they put their smooching on a legal basis.

But though Junie has been a bit of a gad-about she is not the only one who contributed to the plights and plagues of the Powells.

Dick, too, has done his share to keep the marriage on the rocks.

And though his straying has not manifested itself in another woman his way of life has, nonetheless, been pretty hard on June.

In the Powell household Dick is the dominant figure.

He chose the house they live in.

He hires the domestic help.

He even plans the meals.

An example of Dick’s utter disregard for June’s opinions came when he purchased their sixty-three-foot cruiser. The boat cost $103,000. “I must have looked at a hundred and fifty boats with Richard,” says June, “yet he wound up buying one I’d never even seen.”

His work keeps him away from home more than is good for any marriage. When June calls to ask what time she can expect him, she’s usually told, “I’ll be there when I get through.”

“Once,” she told a reporter, “I said to our houseman, Frank, “I haven’t heard from Mr. Powell this afternoon. I guess he’ll be home for dinner.’ Frank said, ‘Oh, we’re having fifty people for dinner tonight. Mr. Powell called and told me what to serve.’ ”

Out of the fifty June knew exactly two.

Dick is a man not given to emotional outburst. He is never too sad or too happy. He rides a middle course.

This is the direct opposite of June’s extremely sad or extremely happy personality.

When June informed Dick that she had to undergo surgery on her throat, he said, “Why wory about that, newsboys have that operation and then go back to work in the afternoon.”

This remark made Junie pretty mad but as she was under doctor’s orders not to talk, she said nothing.

But despite the weaknesses on both sides, the Powells plod on. They’ve had their differences, their separations and even a divorce, but they’re still together.

It could be for any, or all, of the above reasons.

It could also be because they dig each other.