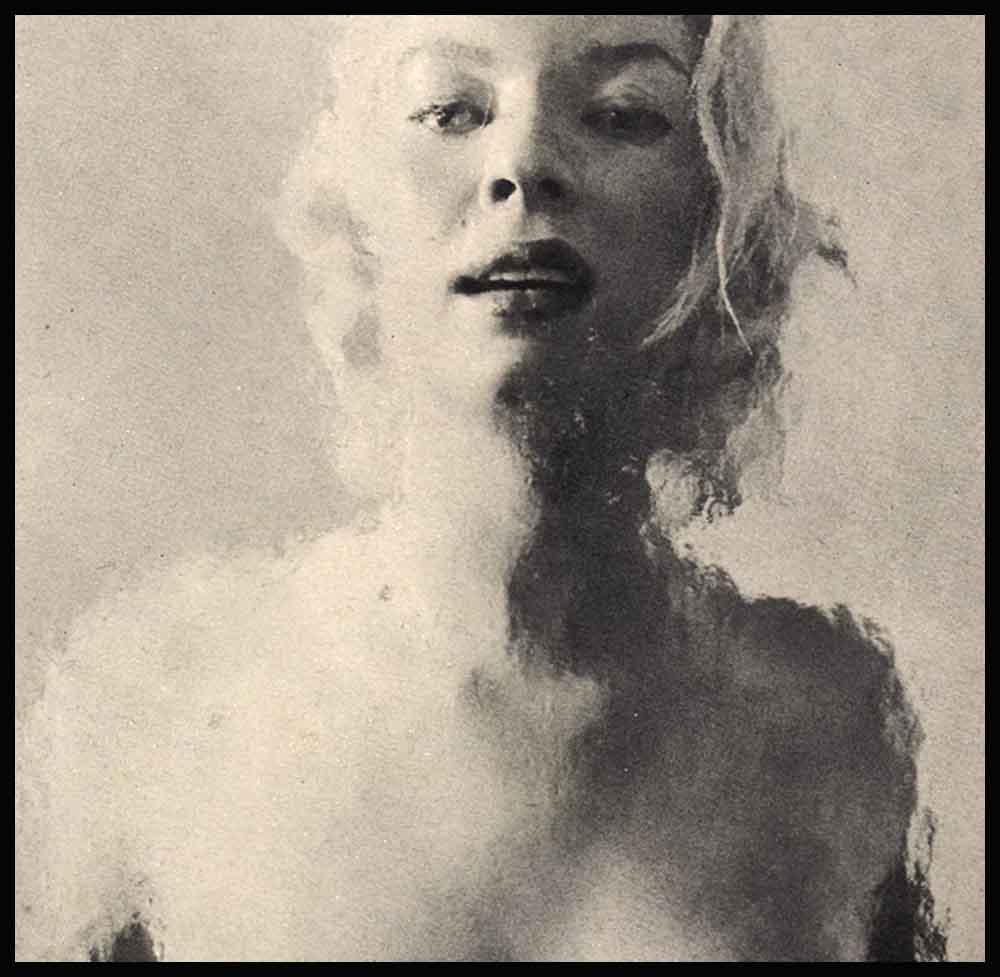 Ever wonder why Polaroid stock is so higt—read this and get the answer!

IN 1837 Daguerre invented the camera.

In 1893 Edison came up with motion pictures.

In 1947 The Polaroid Land Corporation marketed a box that took instant pix.

Since then The Polaroid Land Camera—which to-days enables you to snap and develop a picture inside of ten seconds—has been put to many novel uses.

But it took the smart set—with an assist from a Hollywood star whose initials are R.C.—to pioneer what is undoubtedly the most novel use of all. One which, when the secret is out, will have hotels renting a Polaroid with every bedroom, and will make the camera a must for the kind of people who like to get their jollies and develop them too.

It was the wee hours of the ayem when the police in this California seaside resort received several calls from residents in the most fashionable part of town.

They all complained of a wild, boisterous party.

When the police drove up to the sprawling ranch-type house they were surprised to find the place in darkness. Every so often, however, a small flash would light up one of the windows.

Reluctant to go busting into what easily may have wound up as an invasion of privacy case, the police decided to look things over first. And, peeping into the window from which the flashes were emanating, these two policemen were probably the first non-partakers to witness a Polaroid Party.

Later, when depositions were taken at headquarters, the whole story of just what Polaroid Parties are and how they work, came out.

There are several versions. One of them goes something like this:

The requisites are one good Polaroid Camera, lots of film, a wink light and an even number of males and females. They can be husbands and wives, boy-friends and girl-friends or, for that matter, even strangers. They must, however, have on thing in common. That is, loose morals and an exhibitionist complex.

The gals, stripped to the buff, are herded into one room, where they line up from wall to wall, and the lights are doused. The men, in a similar state of undress, remain in another room—they too are in darkness. With them is the Polaroid.

The girls and the guys are numbered from one to however many there are.

When man number one enters the room where the girls are, he points the camera straight ahead. Girl number one is, at this point, in the center of the room.

He snaps the pic.

Man number two enters, and likewise until all the numbers have been exhausted. At the end of this time the pics are matched to the chicks and things become pretty quiet for a little while.

Another version is to have an uneven number of males and females. Whether the extra is a gal or a guy doesn’t matter. The game progresses like the first but, as there is always one who winds up without a partner, it is his or her job to take shots in the dark of the couples who, at this point, are doing what comes naturally.

Needlessly to say, the highlights, low lights and angles of these pics could win prizes anywhere in the world.

One of the first Polaroid Parties ever thrown, however, took place back around 1955. Only two people were involved in this one. One was the aforementioned movie star with the initials R, C., the other a real pretty little pigeon.

They were holed up at the Madison Hotel in New York City and, after getting bored with the usual kind of fun and games two people can play in a hotel room, the actor, who had starred in many a Hollywood production, decided to make a few pics of his own.

So, renting a Polaroid he and the doll went back to the hotel and this time recorded the usual fun and games for posterity.

Every night they snapped close to a half-hundred pix of themselves in the most intersting poses imaginable. And, considering the fact that they did other things too, this was no mean feat.

THE camera soon had seen more of the star and his lady than the doctor who brought them into the world.

All night long the shutter banged away, the flash bulbs popped and photographs the likes of which they would positively refuse to print at the corner drug store, were peeled, still smoking from the heat, off the back of the accommodating camera.

As the ads say, “There’s no end to the advantages of owning a Polaroid Land Camera. You can do things with it that are downright impossible with any other camera!”

Or: “Moments like this come only once in a life- time—and only with a Polaroid Land Camera can you be sure of capturing them forever!”

The acrobatic actor and his co-star held out for seven sensational, thrill packed nights. And during that time he and she got almost as many kicks out of their pictures as they did out of each other…

But if you’re thinking of ever feasting your eyes on some of these sexy stills—perish the thought. Though the Polaroid ad says, “Photographs produced by a Polaroid don’t fade away,” we can assure them that they fade away very rapidly when flushed down a hotel room johnny — which is what happened to everyone of those passionate pics.

But though the pics were gotten rid of, the idea hung on and today Polaroid parties are popping up all over the country.

They are handled discreetly and, after all, unless things get out of hand as they did in California, who is going to suspect that married couples or unmarried couples aren’t getting together for bridge or dinner or just some social drinking.

The participants have learned to keep their mouths shut and, since everyone gets paired off with everyone else during the course of the picture taking, there is little chance that some jealous wife or hubby is going to blow the whistle.

CERTAINLY wife swapping parties are not new to this country. Way back in June of 1954 when the police of Amesbury, Mass., were investigating the murder of one Melvin Clark, a hard-working citizen of that community, they brought to light one of the most fantastic stories of “wide swapping parties” ever to hit the tabloids.

Melvin Clark, the murdered man, however, had nothing to do with the parties. As a matter of fact he never attended one. He was too busy working nights to provide a good home for his beautiful wife, Lorraine.

But while Melvin was out making bread, Lorraine was at home making hay.

A more than attractive gal, Lorraine Clark fell for a character named Arthur Jackson like a ton of bricks. Since her hubby was never around to take her to parties she appointed Arthur her official escort. And where did she want to be escorted. To the wife swapping soirees, of course.

Arthur really dug the sinful sessions, though he had to share Lorraine with other men, he didn’t much care as he was getting a little extra loving on the side from the wives of the men he shared Lorraine with. It was all in the game, which consisted of men tossing their house keys into a hat. At a signal the wives pulled them out, belonging for the night to the man whose key she had drawn. It was all fair, exciting and anything but good clean fun.

“It’s a moral stain on the face of New England,” a prominent clergyman snapped when word of the parties got out. “We’ll never be able to eradicate it. Everyone should be sent to jail.”

Everyone wasn’t but two people were. Lorraine Clark got life imprisonment for the murder of her husband and Arthur Jackson drew three years for adultery. And considering all the women he adultered with, this was a pretty light sentence, indeed.

Needless to say this stopped the wife swapping parties in Amesbury, Mass.

But it didn’t stop them all over the country. And it didn’t stop the citizenry from thinking up the newest wrinkle, Polaroid Parties. And perhaps one of the wildest games under that heading is a little innovation called Polaroid Roulette.

At his point everyone starts snapping pics. Wink lights and flash bulbs expose more naked flesh than a nudist magazine. And, since the Polaroid people have added the “one, two, three buttons” the camera has become so simple to operate that a whole roll of film can be shot in the dark.

At the end of a given amount of time the lights are flashed on and the shots are examined.

If party A has more than one shot of party B, party A winds up as party B’s bed partner. And the reason this is called Polaroid roulette is because party A and party B could both be boys or both be girls. And there just ain’t no weasling out.

It’s a real queer way of playing the game.

Once again, when all members are cozily ensconced in some corner of the room with their partners, be they of the opposite or of the same sex, the lights are turned off and the flashes start popping again.

The pics that come to light after one of these parties could blackmail a man or a woman for life. And that’s the reason for the rule that all pictures must be destroyed before the premises are vacated.

Now there’s no way of determining whether anyone is holding out but since they’re all in the thing together it’s a pretty good bet that all pics wind up in the sewers of the town.

These sex frolics are all very cozy —until the sheriff or the troopers get wind of them. Thus far, however, except for the isolated case in California, they haven’t—simply because the passionate Polaroid playboys and playgirls keep their parties moving around like floating crap games.

“After all,” said one of the California group, “who gets hurt. If we want to play the game, it’s nobody’s business but our own.”

Meanwhile the Polaroid stock keeps going up and Up and UP!