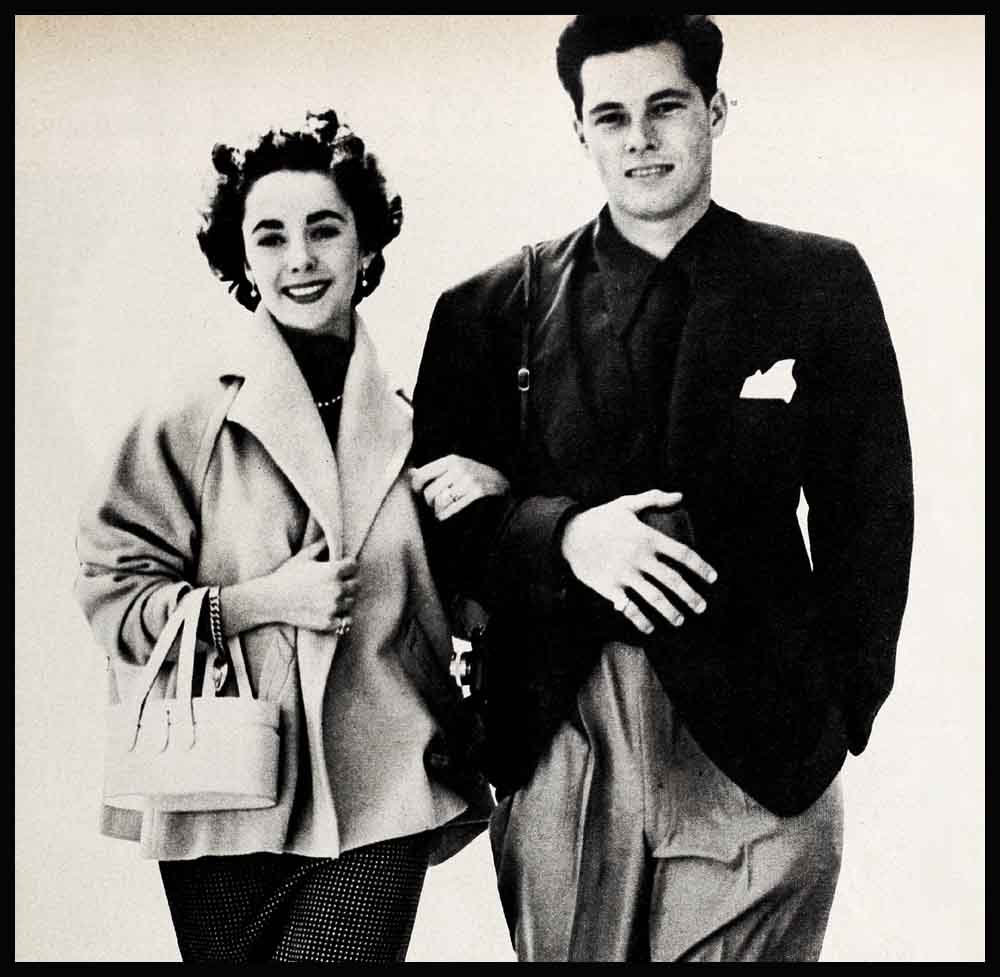 Elizabeth And Nicky Speak For Themselves

I’m going on record right here and say in spite of all that has been printed and hinted I believe the marriage of Elizabeth Taylor and Nicky Hilton will last!

Six weeks ago I wouldn’t have given you a North Korean nickel for their chances.

And I am not being gullible nor easily taken in by the fact that these two youngsters have just left my house after talking two hours with me and telling me straight from the shoulder the problems they have weathered—and are still weathering.

I realize very clearly that Nick came to see me with Elizabeth because she asked him to come with her. In the beginning, I am sure he was reluctant to beard the lioness (me) in her den for he obviously had a chip on his shoulder when he first walked into the room.

The reason? I had given him a pitiless dressing down the week previous, on my radio show, for his treatment of Elizabeth at two Hollywood parties. On both occasions she had spent the evening in the powder room, crying.

I also knew this for sure: Two hours after Elizabeth and Nicky arrived in New York from their three-and-a-half months’ European honeymoon, the distraught bride had called her studio.

“Send someone to bring me home,” she sobbed over 3,000 miles of telephone wire, “I can’t take any more of this.” A few hours later she checked out of the Plaza Hotel and flew to Chicago alone.

A representative from M-G-M (a young press agent and close friend of Elizabeth’s) was to meet her and fly back to the Coast with her after making the official announcement that Liz had left Nicky.

But, meanwhile, Nicky who was driving their car from New York to Chicago, arrived before the studio guardian. He went immediately to his bride’s suite.

“Elizabeth, darling!” he said with a catch in his voice.

And that ended that narrow escape as their marriage skidded so close to wreckage.

With this knowledge of their troubles as a basis, I felt I had good and just reason to try to snap Nicky to his senses before it was too late.

On Nicky’s side—I had heard he considered me a cruel and hardened newspaper woman who had aired his troubles to millions of listeners just for a story.

That’s the way we stood when the young Hiltons arrived at my house. An initial strain between us was natural, at first. An hour later, I think both Nicky and I had changed our minds.

What innate charm and sweetness he has! Not a “fake” charm, mind you, put on for my benefit to get me off his neck. But his sincerity and straightforwardness is even more important a part of his personality than his good looks, his youth (he is twenty-four) and the background of his wealth. I have known his father, Conrad Hilton Sr., hotel magnate, for many years. But I had never had a chance to really know Nicky Jr, until this day.

He put his cards on the table from the very moment we started to talk seriously.

“Elizabeth and I are going through a period of adjustment faced by every young married couple,” he said. “Most couples have the privilege of working out their problems in privacy. We don’t. We can’t close our blinds and have our misunderstandings in private. The whole world knows every lime we quarrel and gets in the ring with us like a referee at a prize fight!”

I wondered if that was a crack. But I couldn’t restrain a smile. Nicky looked at me quizzically—and then broke into a boyish smile.

“The next time you let fly at me, tell me—not millions!” he said—and then we both laughed. That broke the ice.

While Nicky and I had been squaring off, Elizabeth, looking like a sub-deb in her pretty Ceil Chapman dress and coat (they were going on to a night football game later) had been sitting quietly by, a little on the nervous side. Now she turned to her handsome young husband and said quickly:

“See? I told you to wait until you knew her—even if she did scold you on the radio.” It was the first time I had been so openly discussed to my face—but it made my heart warm toward these youngsters who live so pitilessly in the glare of the spotlight.

Nicky reached over and patted her hand. The look she turned on him was shining with love. Don’t anybody tell me she isn’t very much in love with him!

“Elizabeth and I are going to be happy for the best reason in the world,” this boy said to me. “I love her—and she loves me.” There was no attempt at dramatization in his voice. He meant it. Straight from the heart.

I thought back over the gossip of all the spats they had had in Europe and suddenly many things were clear to me. How could it be otherwise? They are so young and inexperienced—and yet we have expected them to act with the wisdom of people of great worldly experience.

Admittedly, they are both a little spoiled. Elizabeth, at eighteen, is the darling of a great studio. Her every whim has been anticipated and gratified. Nicky is the scion of an enormously wealthy family. He, too, has usually had his way, indulged by both a doting father and his mother (remarried and living in Texas).

And yet, we wiser heads expected them to take the center of the spotlight—and make no mistakes? Maybe Cinderella and Prince Charming could live happily—with no jolts—ever after. But they are fiction people. Elizabeth and Nicky are very human—and more lovable for it, I think.

As though she felt she had been out of the conversation too long, Elizabeth suddenly spoke up. “Of course, we have had quarrels,” she said spunkily. “But I have said just as many horrid things to Nicky as he has to me!”

Believe me, I could hardly keep my face straight at this wifely defense of a spouse under fire. Once underway, she put in another thrust.

“You said I was so thin and had lost so much weight,” she piped up. “Well, Nicky lost eight pounds in Europe, too!”

Now we all had to laugh. I waved my white handkerchief in surrender and noticed that Nicky very tactfully changed the subject.

“I am going to buy a house for Elizabeth,” he said, smiling. “She cooked dinner for me last night. We had lamb chops, peas and salad—not bad,” he appraised, honestly.

The idea of this dainty girl doing household chores was a little too much—and Nick met the twinkle in my eye with an answering one.

“I did the dishes,” he answered my unspoken query. ‘We have a cook now so Liz won’t have to go into the kitchen unless she wants to.”

Elizabeth took over the conversation here, full of talk about how she is redecorating the bridal suite at Nick’s Bel Air Hotel until their new house is bought.

“Nicky and his brother Tom turned the whole redecorating job over to me and told me to do it any way I liked,” she said.

The young Hiltons have just bought a dog—a tiny French poodle. I realized how young Elizabeth is when she told of how the poodle dragged one of her nightgowns across the living room when they were having guests—and how she almost died of embarrassment. “The dog is a retriever,” she said solemnly. At that Nicky let out a howl.

“Her dog,” he explained, “is just two months old and just a baby.”

Just then my cocker spaniel, Jimmie, came in and made a bee-line for Nicky, licked his hand and stayed right by his side until he left. “I love cockers,” young Hilton said.

They both love animals so much they told me a ridiculous story of catching a tiny field mouse in their suite and of feeding it crackers and cheese and keeping it for several days before they turned it loose. They couldn’t bear to kill it.

This Nick is such a swell kid I wondered how he almost got in the spot of “the heavy” with the public. When he told me that he had been on a battleship for ten months during the war and was anchored just off Japan when peace broke—I think I understood that answer, too.

Although the problem of getting back his job or financial worries were not Nicky’s—he was still imbued with that desire for independence and privacy, and the right to live his own life free of being bossed.

When he met and fell in love with Hollywood’s beautiful Cinderella girl—millions of fans had their own idea of how he should conduct himself. As I see it now, I believe Nick’s sulkiness during the early stages of their marriage to be the direct result of what he thought to be “prying” into their private life. That—and too much idleness during their long honeymoon.

And, perhaps, too much money to spend. And too few real responsibilities.

Now—all this is changed.

Elizabeth’s bridegroom is up at seven-thirty every morning. “You have to be when you are in the hotel business,” he explained. “My father has worked hard all his life and he expects my brothers and me to do the same.

“I go over all the figures of the daily receipts—my special job being the Bel Air Hotel in which I have bought part interest,” he said. “This makes me particularly anxious to keep an eye on everything and active in the management,” he smiled.

“With Nick working most of the day,” Liz interjected, “I’m going to be glad to get back to the studio again. I have had six months off—and that is a long time to be idle. Besides, a honeymoon can’t last forever,” she nodded her head sagely. “We’re just plain married people now.”

Nick gave her an affectionate peck on the cheek. You can tell that Elizabeth’s marital ideas sometimes amuse him under the deep affection he has for her.

This new maturity in Nick is one of the best reasons I believe they will be happy. It is good for a husband to feel protective and indulgent toward his wife.

Before they took off for that all important football game, they asked me if they might make a tour of my house. So we went upstairs to look at my bedroom (also newly redecorated) and Dr. Martin’s new quarters.

When we came back downstairs and I walked with them to the door, Nicky impulsively grabbed my hand.

“I like you,” he said. “You’re different from what I expected. Remember—the next time I get out of line—you’ll tell me, and not the world!”

My money says these kids will work it out.

Not that there won’t be other hurdles— and yes, other battles. But even with the world “spying” on a stubborn young bridegroom and a world-famous bride—I’ll bet these two young people have the fundamental strength and character and sweetness and humor for a fine marriage.