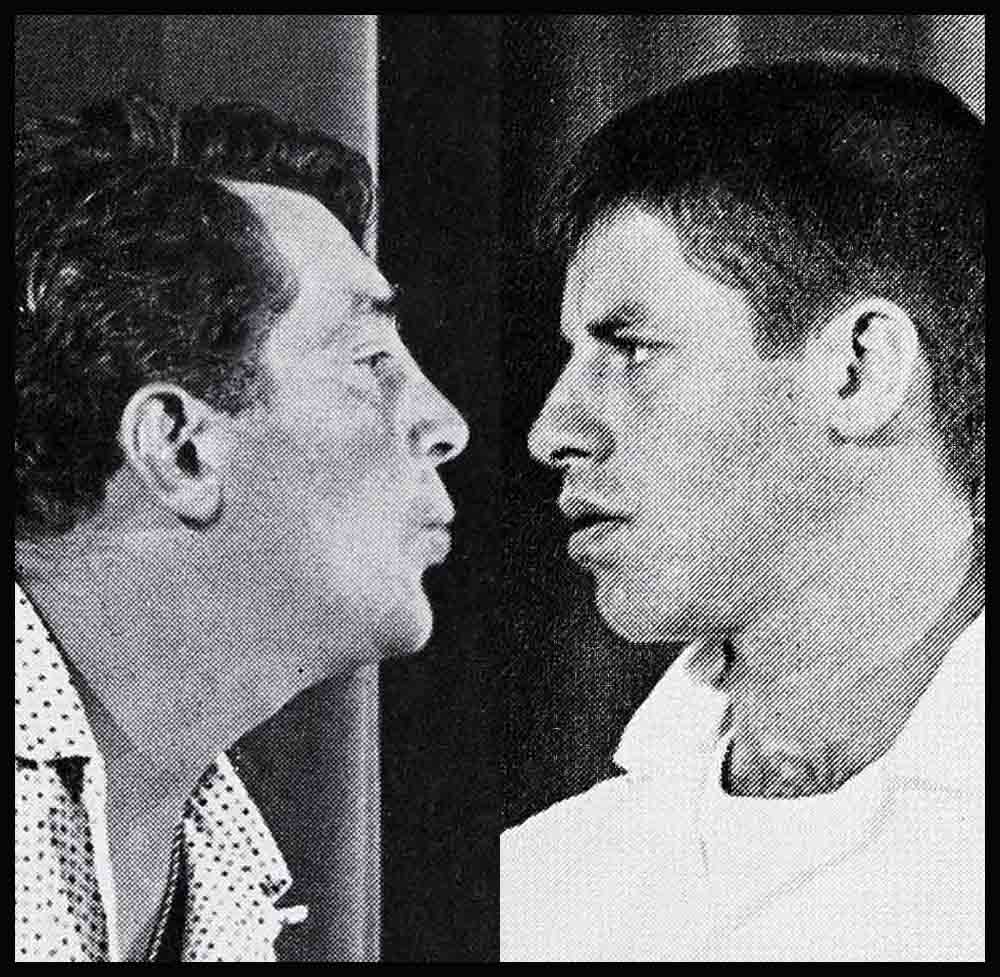 DEAN MARTIN AND JERRY LEWIS have the reputation onstage and backstage of being the world’s zaniest characters.

Having suffered, dodged. cajoled and bribed my way through four pictures with them—“The Stooge,” “Jumping Jacks,” “The Caddy” and “Living It Up”—I wouldn’t dream of questioning the boys’ distinction.

There are no lengths to which they won’t go in pursuit of a gag. As their director. I have been the recipient of phony telegrams, horrible shirts I never ordered; and had Jerry follow me around doing his chimpanzee act.

Once they complained they couldn’t get me on my office phone. I said, after all, I only had one phone. The next morning I went into my office and found twenty-four telephones (prop, I found out later) installed—on my desk, on the chair, on the window sill.

I discovered long ago that these two can drive you almost crazy. But I discovered something else, too. They are a couple of very sentimental guys, and—underneath the veneer of insanity—very solid citizens.

A real tip-off to this came when one of the stunt men at the studio became seriously ill. He was working in “Jumping Jacks” at the time, and the whole crew was shocked to learn that he needed an exceedingly expensive operation immediately.

A collection was taken up around the studio. Between the modest amounts given by the grips, hairdressers and prop men, and the larger sums managed by those of us who could better afford it, we made up the necessary fund to guarantee the operation.

The stunt man had it, and it was successful. While he was convalescing, I visited him in the hospital. His wife was with him when I came into his room—a private one, to my surprise.

When I commented on how nice the room was, the wife said, “It’s because of Dean and Jerry. We can never thank them enough.”

You mean they paid for it?”

“They did a lot more than that. They contributed to the fund you wonderful guys made up, and then matched it with the same amount on their own.”

That’s how it is with Martin and Lewis—they’ll torture you, exasperate you, hound you to distraction with their horseplay, and then when the chips are down, show themselves as the great fellows they really are.

But when they’re on the studio set, the boys never have a serious moment. I do, however; I remember that I had a terrific toothache once, which bothered me for a couple of days before I could find time to go to the dentist. Finally I had it treated.

It still was sore next morning when I came on the set. Jerry Lewis, holding a paper bag, rushed up and assisted me into a chair.

“Norman,” he crooned. “Dean and I are desolate because you have a sore tooth. It hurts us worse than it does you. Please accept this as a small token of our sympathy and esteem.”

He bowed, shoved the paper sack into my hand, and galloped off. I opened the bag warily; it could have held anything from a bull-frog to lighted firecrackers. But it didn’t.

It was a sackful of jawbreakers.