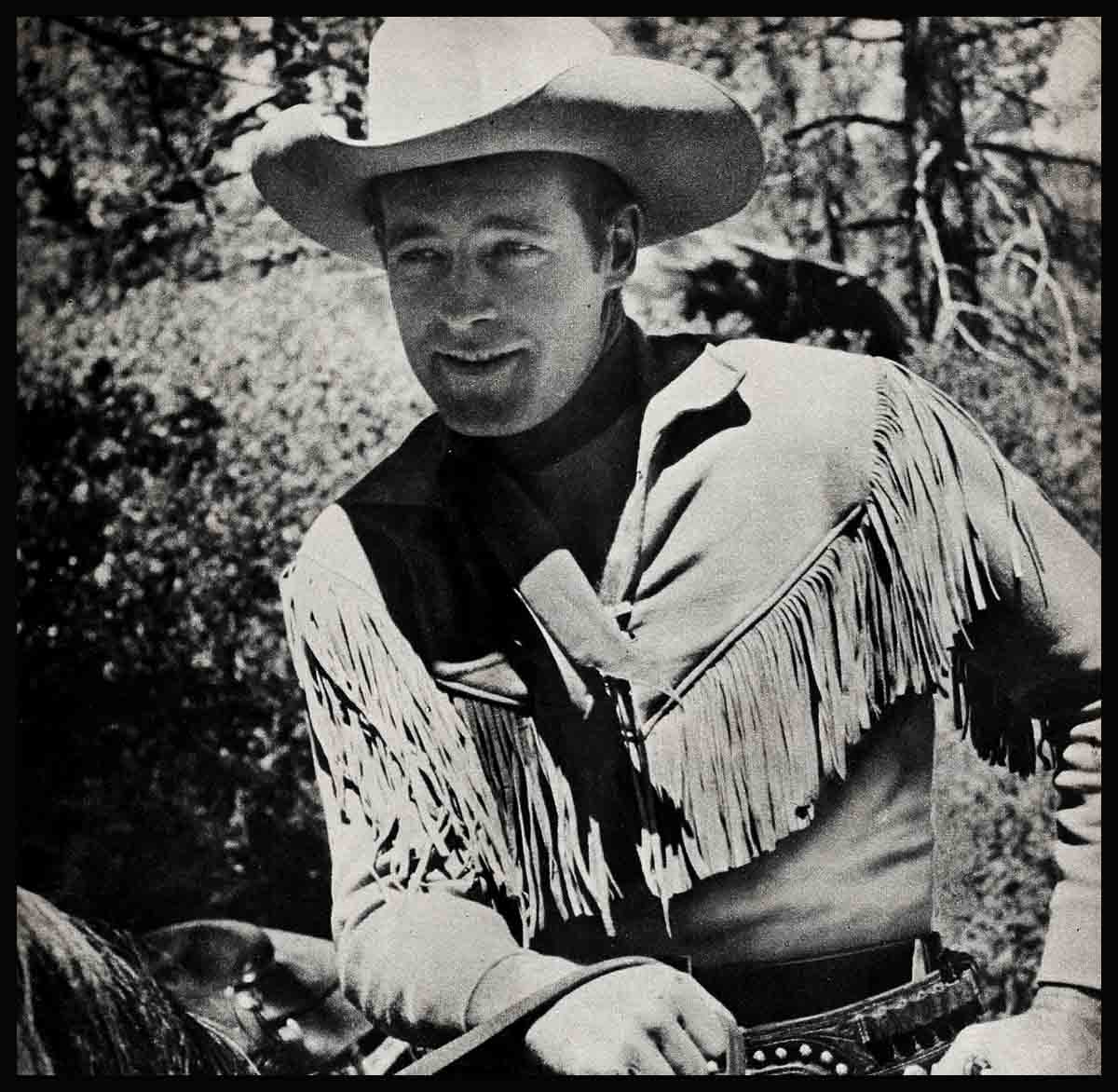 The best way to find out something, I figure, is to go right to the source and ask a lot of direct questions. And since I wanted to know what Guy Madison—the new Guy Madison—was like now that he’s back in the movie business again, I decided to find out from Guy himself. I tracked him down while he was at work on Warners’ “Rear Guard,” and put my questions to him point-blank. He gave me his answers the same way—straight from the shoulder.

Here’s what our interview (there were moments when Guy thought of it as an inquisition) sounded like, as we lolled under a big, shady tree during a lunch break and made our way through a couple of man-sized chicken-fried steaks:

A. Wow! I thought this was supposed to be a friendly interview. What do you mean by that?

Q. Nothing unfriendly, you can be sure. But, in the first place, your name isn’t even Guy Madison.

Q. And, in the second place, although you’re in Hollywood, you’re not really of it.

A. Well, I’m not much of a party boy, if that’s what you mean. I never was one for running around town. I have some chums that I see frequently—Lita and Rory Calhoun, Andy and Doagie Devine—pals with whom I have common interests.

Q. But as far as the rest of Hollywood’s concerned, you’ve been pretty much a male Garbo. I never see you in Romanoff’s or Ciro’s or the Mocambo. How come?

A. I was put all through that routine when I first started in pictures. You know—going to a party or a night club merely on the chance that I’d be standing within focus, talking to somebody I didn’t know or didn’t care to know, when the flashbulbs popped.

A. Now I guess you could call me the solitary type. Or maybe just a hick, I don’t know. I just know I’m happier hunting or fishing than I am mixed up in the big-city stuff. Whenever I get the chance, I like to head for the Colorado River and hunt quail or jackrabbits or duck.

A. Just like that! I keep my car stocked with camping gear so I can take off whenever the mood strikes me. And that’s likely to happen while I’m driving along Sunset Boulevard or having dinner or getting my hair cut.

Q. And how does Gail—your wife, Gail Russell—fit into this solitary picture? What does she think of your just taking off that way?

Q. Well then, how did she react to your moving into a separate apartment while you were making this picture? You said it was so you “could concentrate better on your work,” I think, didn’t you? But you know, a fellow can’t help thinking that all this solitary stuff might have something to do with the break between you and Gail that we’ve been hearing about. Did it?”

A. That’s a subject that’s personal to me. Just as your life is personal to you. I know that everybody feels that whatever an actor does—or thinks—is public property. But I can’t agree. And I think your readers are adult enough to go along with my attitude.

Q. Fair enough. And I remember that when you and Gail were first married, four years ago, you had the same attitude. Everybody was speculating wildly—wondering whether you were married or not. And you and Gail didn’t announce it until you were good and ready.

A. Gail has always felt exactly the same way that I do about privacy. So I’m afraid that what you choose to call the “big problem” in our marriage is going to stay the big mystery.

Q. Well then, let me ask you a general question. Do you believe in marriage?

Q. What ideas do you have about marriage?

A. I’m sure if you think it over, you’ll agree that there’s no one set formula for a happy marriage.

Q. What’s your definition of love?

A. Love is when you think only in terms of giving to the person you love, without expecting any return other than the happiness you can provide for that person. If you get your kicks out of doing and giving and making someone happy, that’s the greatest.

Q. Should a wife follow her husband wherever he wants to go?

A. That all depends. I’ve been on a couple of hunting trips in the Rockies where I wouldn’t think of taking a woman. I wouldn’t even dream of asking her.

Q. But doesn’t she have any say in the matter? Shouldn’t she be asked along, even though you know it’s going to be a rough trip?

A. Well, if a man really wants his wife with him, he’ll ask her to come along. And I guess she ought to go, because, after all, she married him, didn’t she? But in the case of a really rough hunting trip, he ought to leave her at home because she might get hurt and she’d only slow him down. And she shouldn’t get upset, knowing all that, if he doesn’t ask her.

Q. What qualities do you admire most in a woman?

A. Honesty, beauty, brains and a sense of humor.

Q. Which do you prefer, the gadabout or the stay-at-home type of mate?

A. I like a wife to be interested in the home, of course. But I also think she ought to be ready, willing and able to take a trip to the moon with me if I ever decide to build a rocket ship.

Q. Well, that seems to sum it up, so let’s get on to another subject. Why do your friends call you Bink?

A. Andy Devine dubbed me that because I kept mispronouncing the word “bank” in a “Wild Bill Hickok” TV script. The line was supposed to be, “Let’s lay low here and surprise those bank robbers.” I kept calling them “bink robbers.” Why, I’ll never know. And Andy picked it up.

Q. Do you actually come from a place called Pumpkin Center, California?

A. I was born in Bakersfield. There’s a suburb—I doubt whether the people of Bakersfield would really call it a suburb, it’s just part of the town—anyway they call it Pumpkin Center. I usually say I hail from Bakersfield except when Andy Devine’s around. And then I say I come from Pumpkin Center. Andy gets a big kick out of it because it makes me sound like a hick. Which I am.

Q. For a hick, what do you think of yourself as an actor?

A. Not too much. I’ve never once pretended to be a good actor. You know I just happened into this business by accident in the first place.

Q. Now let me get that story straight again, just for the record. You were in the Coast Guard when you got your film break, weren’t you?

A. Yes. It was back in ’42, and there I was, a sailor down in San Diego. A buddy sent a picture of me that was in a Navy magazine to a talent agent named Helen Ainsworth. Helen invited me to Hollywood and introduced me to David Selznick. He gave me a part in “Since You Went Away” the very afternoon I met him. And he signed me to a contract for when I got out of Service. I didn’t know the first thing about acting, but wouldn’t anybody be a fool to turn down a nice, fat motion picture contract with the fabulous Mr. Selznick?

Q. There was a fantastic amount of publicity that broke about you when you made such a hit in “Since You Went Away.” How do you explain it?

A. It was fantastic all right. The only way I figure it is there was a sort of famine in publicity about leading men at that time. It seemed as though the studios felt they had to apologize for actors who weren’t in uniform. Then I came along while I was still in the Navy and did my part in “Since You Went Away” on a seventy-two-hour pass. So they went all out.

Q. You’ve been in pictures eleven years and have made only eight pictures—besides this one, “Rear Guard,” that you’re at work on now, right?

Q. What were they?

A. “Since You Went Away,” “Till the End of Time,” “Honeymoon,” “Massacre River,” “Drums in the Deep South,” “Texas, Brooklyn and Heaven,” “Red Snow,” and the one that’s playing around the country now, “The Charge at Feather River.”

A. I guess my favorite, so far, is “The Charge at Feather River.” It’s in color and in three dimensions. Gordon Douglas is a great director, and the cast’s terrific—Frank Lovejoy, Helen Westcott, Steve Brodie, Vera Miles and all the rest. But “Rear Guard” may turn out to be even more exciting. It’s 3-D too, and it has another swell cast—Joan Weldon, Harvey Lembeck and James Whitmore.

Q. For a hick, as you like to call yourself, you seem to be doing okay, huh?

A. Now, yes. But it was rough sledding for a while, you know.

Q. Why do you think that was?

A. You know how it is with quick overnight successes. I guess I just wasn’t quite ready. The fact that I was more at home on a horse than in front of a camera must have showed through.

Q. But you’ve been doing just fine in TV, haven’t you?

A. I can’t complain about the “Wild Bill Hickok” pitch at all.

Q. No, and neither can anybody else. Despite what you’ve said about not having too great an opinion of yourself as an actor, everybody who’s anybody says your TV work has turned you into a really topnotch performer. And your rave notices for your last movie, “The Charge at Feather River” prove that.

A. They’re being too generous. All I’ve ever hoped is that I can come across with a likeable personality. And that when I speak my lines I can keep the hick out of them enough so people will understand what I’m saying.

Q. Got any particular movie actresses in mind that you’d like to be saying those lines to? Who would you like to work with most—Rosemary Clooney, Lana Turner, Betty Grable, Jane Russell, Marilyn Monroe—

A. Hey, I can’t answer that! I might get a chance to work with the very one I didn’t pick.

Q. All right then, how about this one: Five years from now, do you think you’ll have made your greatest success as a movie star or a television star?

A. Ask me five years from now!

Q. What did you do during your long stay away from movies, before TV brought you back into the public eye as a star?

A. It wasn’t as grim as people think. I toured for a time with a few stage plays—“John Loves Mary” and “Light Up the Sky.” And for the past two and a half years, I’ve been up to my ears, making TV films at a mad pace, so there’d be a half-hour of material ready for the “Wild Bill Hickok” series every week. And Andy and I record three “Wild Bill” radio shows a week for the Mutual Broadcasting System. So there hasn’t been much time for loafing!

Q. Do you find it’s much different being a star for TV and a star for the films?

A. I sure do. Working in movies, I get to pay as much attention to my leading lady as I do on TV to my horse!