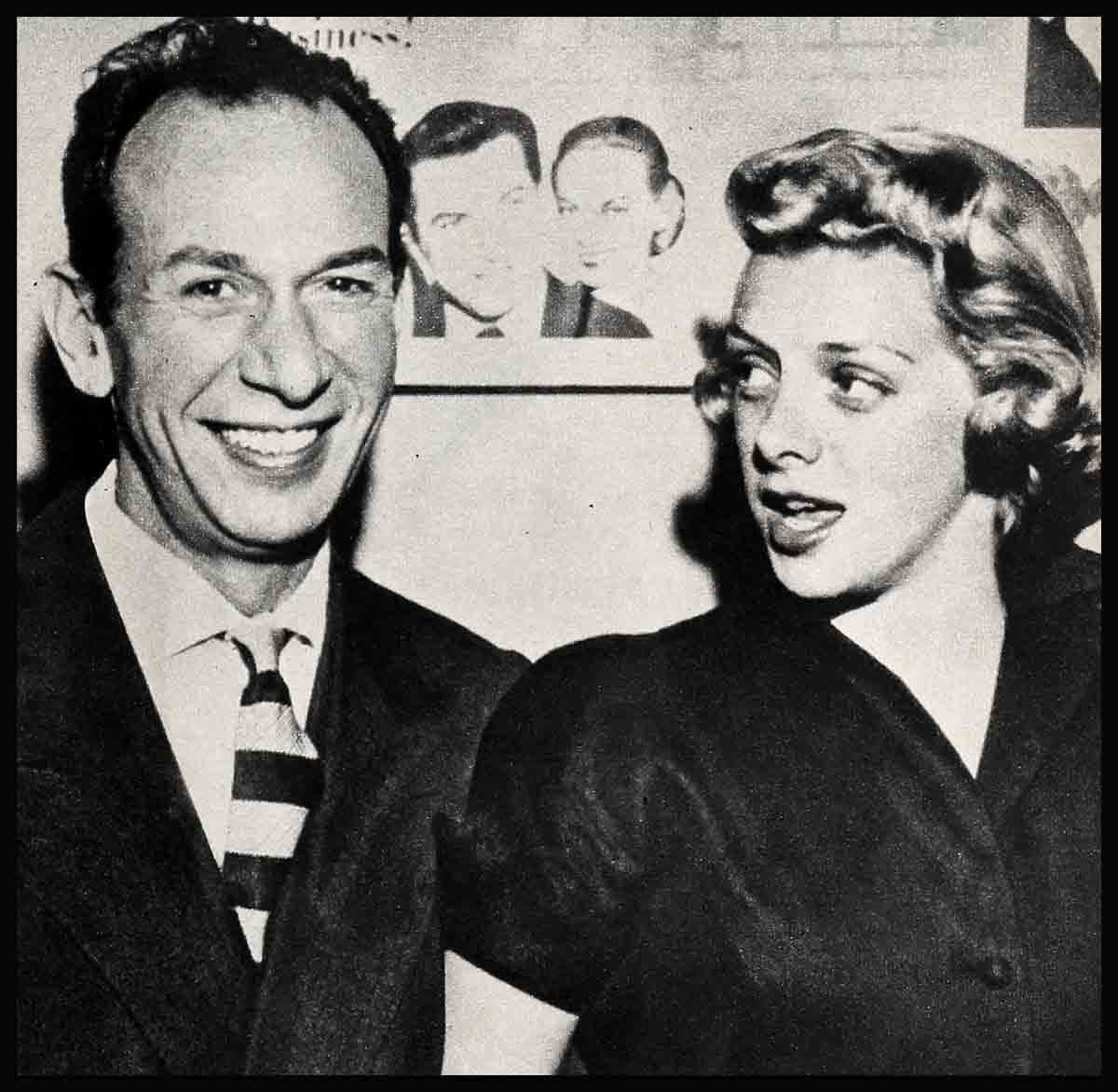 And then suddenly—whammo!—Rosie and José were married. And nobody had to speculate any more.

On July 13, just a week after José’s second wife, Phyllis Hill, divorced him in Juarez, Mexico, he and Rosemary said their “I do’s” in a judge’s chambers in Durant, Oklahoma.

Like everything else these two do, their marriage had to be crammed into an already over-crammed schedule. José was singing the lead in the musical, “Kiss Me Kate,” in Dallas, Texas, and Rosie had rushed down from Hollywood to see his opening after having finished work on Paramount’s “Red Garters.” They made up their minds, drove the ninety-six miles from Dallas to Durant, and that was all there was in the way of a wedding trip.

Honeymoon? No time for that! They had to hurry back to Dallas in time for José’s curtain. And they had other obligations. Their first as Mr. and Mrs.—on their own wedding day was to act as host and hostess at a cocktail party in honor of Olivia de Havilland, who will be appearing in Ferrer’s next Broadway production, “The Dazzling Hour.”

How did it happen? Here is the inside story of the Clooney-Ferrer wedding with the events beginning Saturday, July 11, in Dallas, Texas.

“Would you like to get married this afternoon?” asked José Ferrer.

“Gee!” wailed Rosemary, “I don’t think there’s time. It’s already afternoon and you have a matinee plus an evening performance today.”

After a year-and-a-half of transcontinental friendship José was free to pop the question. “How about Monday then?” he pursued. “We’ll drive up to Durant, Oklahoma, and get the judge to marry us. It’s only a couple of hours away. We can be back in time for the evening performance.”

Sunday came and went. During the entire day Rosemary felt as if she were sitting on a keg of atom bombs waiting for the explosion. She was in a daze—whenever she came out of it, she found herself holding her breath. She was dying to tell the news to someone, but she didn’t manage to get out of the fog long enough to say anything coherent.

And, Monday morning, July 13, at 7:00 A.M. Rosemary and Jose, accompanied by Kurt and Ketti Frings, drove to Durant, Oklahoma, for the wedding.

Sixty hours later, Rosemary, now Mrs. José Ferrer, was sitting beside the pool in the back yard of her recently-leased Beverly Hills home. “I’m still in a daze,” she said, “and I still haven’t been able to catch my breath to say anything to anybody.”

“Why didn’t you tell us you were going to get married . . . ?” asked a close friend of Rosie’s who happened to be at her home. “And why Durant, Oklahoma!”

“We picked Durant because we didn’t have to wait,” said Rosie. “And I didn’t tell you or anyone else because we honestly didn’t know!”

“Were you scared?” asked her friend.

“Sure. I was about to drop my teeth. But not because of the wedding—I don’t think. I knew that when we got to the County Seat we’d have to take our blood tests. I took along some smelling salts because I didn’t want Joe to know I was scared of needles. He was urging me on, but when I looked over his shoulder and caught sight of the needle it looked like one of the Bengal lances! Then it was my turn. That’s when I was scared! I felt faint. But Joe smiled and I didn’t seem to need the smelling salts.”

An hour later, Rosie related, they were in the Court House standing in front of the Judge. Seth Shoemaker, was his name, and he and the clerk, Dewey “Red Pap” Currin, plus the Frings and Joe Schreibman (Rosie’s agent) were the only ones present.

“I felt detached,” said Rosemary, “like a goldfish floating around on the outside of the fishbowl looking in at the people. Then the Judge said, ‘I pronounce you man and wife,’ and Joe kissed me. That woke me out of my daze!”

Rosemary recalls she was still a bit bewildered when they started back for Texas. “I fell asleep as soon as we got in the ear,’ she said. “At Denison, Texas, we stopped for something to eat. I was kind of dizzy so I don’t remember what we ate. I do remember that Joe looked at me across the table and I started to giggle. I giggled the rest of the day!”

As soon as Rosie and Joe arrived at the hotel in Dallas, Rosie went straight to her rooms to change and José went up to the press party that had been previously arranged. Though the party was Miss de Havilland’s, the reporters were after José like eager hounds after a rabbit.

“When’d you get married?”

“I’ll bet you’re too excited to remember what she wore,” said a female reporter.

“Excited I am,” said José, “but I remember. She wore a suit, made from material I bought in England a year ago!”

“One glass of champagne later,” Rosie says, “the party was over and it was time for Joe to go to the theatre to make up for the night’s performance of ‘Kiss Me Kate.’

“Joe was supposed to make his entrance to straight music, but word of the marriage was out, and as he stepped through the wings, the orchestra started playing ‘Here Comes the Bride,’ Dum, Dum, Ti Dum. I’ve never seen Joe embarrassed—but that night he blushed. He had a prop in his hand, a bock I think, and he covered his face with it as he walked on stage. The audience cheered and laughed so long he had to exit and make another entrance.

“In fact,” said Rosemary, “Joe realized for the first time that the entire play is all about marriage! The audience laughed all night long to the lines because now they had special meaning. It also broke up the cast because they laughed in all the wrong places!”

After the performance that Monday night (their wedding night) Rosemary and José, with the cast who had come down for “The Dazzling Hour” rehearsal, finally got together at the hotel for a champagne party to celebrate the wedding.

The very next morning Rosemary hurriedly flew back to Hollywood to attend the premiere of Paramount’s “Stalag 17” and to move into her newly-leased house—the one she rented for herself just before the marriage. “I’ve never had so much happen to me in such a short period of time,” said Rosie. “I haven’t even unpacked yet—and this week we’re moving around the corner to Joe’s new place. He just bought a home for us two blocks away.”

The phone beside the pool rang. It was Mr. Ferrer calling from Dallas, the operator said.

“The afternoon check-in,” explained Rosie. “Hi, sweetheart,” she sighed into the phone, “I dreamt about you last night . . .”

“I dreamt we were both on the road with Stan Kenton!”

Brief silence, then, “What was I doing, turning the pages for Kenton?”

After the phone conversation, Rosie said, “We’re going to have a much smaller telephone bill now that we’re married. Of course we still talk about three times a day but last summer it was from London and Paris to Hollywood!

“With Joe calling every day from abroad I got to know the transcontinental operators real well. Whenever Joe couldn’t get through to me, they’d say, ‘Sorry, Miss Clooney, but the lines are down!’ You’d think they had nothing but hurricanes over there!”

Forty-eight hours after her arrival back in Hollywood, Rosemary had not yet found time to send out thank-you notes for all the wonderful messages of happiness her well-wishing friends had sent; telegrams, flowers, cases of champagne, letters, notes, and phone-call messages had piled up on the dining-room table and overflowed onto the floor. But Rosie was sure she’d find time to get them all sent off before José arrived next Saturday.

In the two days before his arrival, all she had to do was tape two shows Thursday, two shows Friday, and do four publicity layouts. Saturday morning, of course, she wanted to take in the baseball game on the Paramount lot after seeing her picture, “Red Garters.”

“But I’ve got to see that game,” said Rosie. “It’s my team vs. the writers. Since my trip to Texas they’ve pulled in some ringers on us and I’ve got to go down and check up on their references. Those writers! You just can’t trust ’em. They’d steal home plate and actually take it home with them if you’d let ’em. Besides, my team has won two out of three of the past round robins and if we win this one we get to keep the cup!”

In between radio, television, baseball and motion pictures, Rosie hopes to start a family and have a honeymoon! “Joe will be here in a few days and we’ll have four days together at La Jolla. That’s not the honeymoon, of course, ’cause he’ll be working. But we’ll have two days in Canada next month—no work, no nothing! That’s going to be our honeymoon!

“As for children, well I want a family—six will keep us busy enough, I think.”