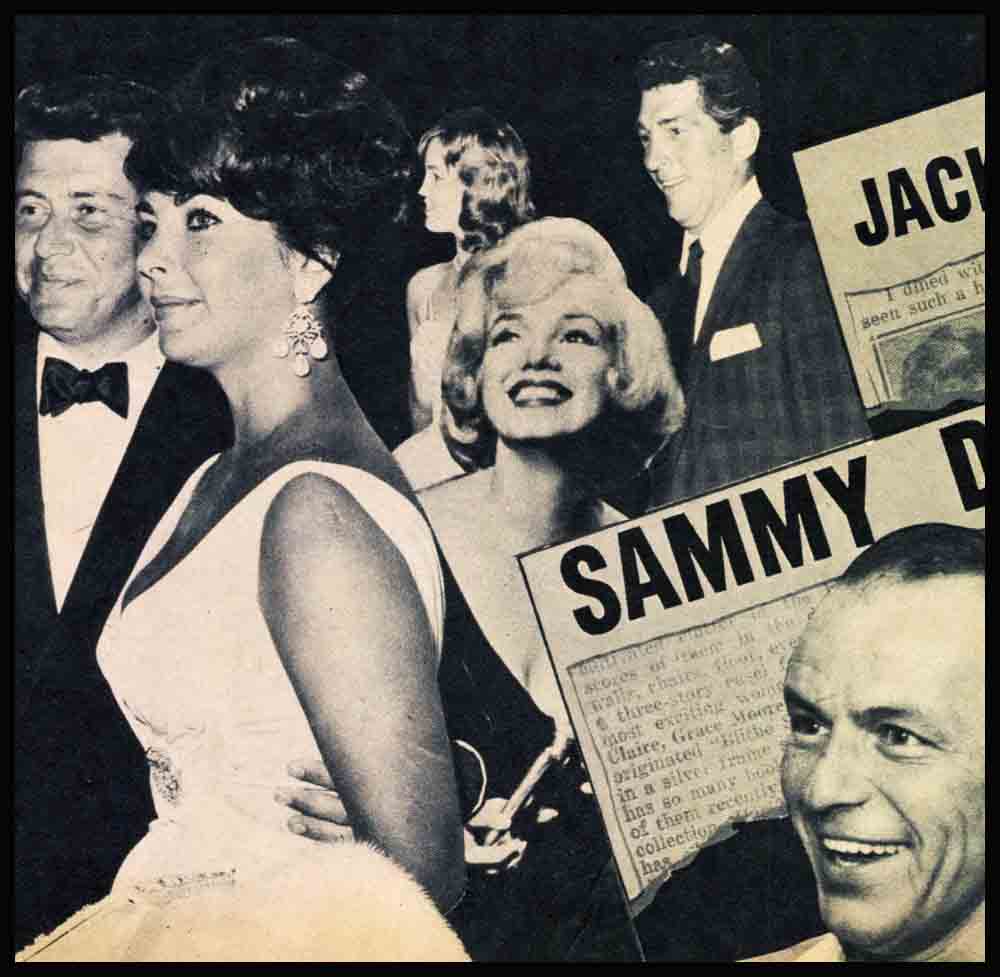 Stars That He At Up The Headlines

This is the marriage that stirred up national and world-wide controversy!

ALTHOUGH MIXED MARRIAGES, both religious and racial, are becoming more and more common in this country they still are newsworthy events, particularly when one of the parties involved is a celebrity. When, as in the case of Swedish born actress May Britt and Sammy Davis Jr., both bride and groom are constantly in the public eye the marriage is almost sure to stir a great deal of interest.

May and Sammy are more fortunate than some. They seem to have the support and well wishes of their many friends in Hollywood and throughout the world in addition to the stolid approval of the marriage by May’s parents. As Miss Britt pointed out when she was interviewed by Mike Wallace, interracial marriages are accepted quite readily in Europe and especially in Sweden where there is nothing out of the ordinary. It is only in America, she added, that eyebrows are automatically raised.

May was “given away” at her wedding by her father (her parents flew in from Stockholm for the marriage), who in halting English made it quite clear that he was happy to see his daughter married to the man she loved.

Sammy and May became very proud parents recently. Miss Britt will continue to act if she is able to find parts that please her . . . but there is no doubt about her being quite happy with her role as Mrs. Sammy Davis Jr.

TV COMEDIAN JACK PAAR could have a twenty volume scrapbook of clippings describing his various bouts with networks, writers, newspaper columnists, and other entertainment personalities.

One of the biggest flare-ups between entertainers ever to be recorded by the press were the battles between Ed Sullivan and Jack Paar. Sullivan declared war when he challenged Paar’s right to pay guests a mere $320 when Sullivan, on CBS, was forced to pay the same people thousands! Sullivan maintained that if if a star wanted to appear on the Paar show just to chat that was one thing. If he did the same routine for the lower fee on NBC that he did on CBS for six or ten times as much loot, Ed would have nothing to do with him in the future.

Debates were scheduled and broken . . . Jack said that Sullivan backed down and Sullivan said the same of Paar. The differences between them seemed insoluble and in the meantime show business split into two camps. As a consequence there are Sullivan ties and Paar-ites (or as Walter Winchell puts it, “Paar-isites”) and at least for the time being it looks as if the twain never shall meet.

IN THE FİNAL ANALYSIS A marriage, even it it entails special difficulties, is a happy occasion. To many people, and justifiably so, it is the happiest occasion of their lives. A wedding marks the beginning of a hope-filled optimistic time, a time for plans and dreams of present and future. The story we are about to reveal is just the opposite. It is a tale of despair and fatalism… for these are the feelings that precipitate a suicide attempt, at least they did in this case.

Brigitte Bardot, Frances “Sex Kitten,’’ left Paris for a rest .One reason for her going was low blood pressure and the advice of her doctor. The other, say her intimates, was the difficulty she was having with her second husband and fourth great love, Jacques Charrier.

Jacques’ jealous fits made headlines before, but this time they ended in violence. Jacques saw Brigitte emerging from a Left Bank – night spot with her current leading man and the brawl began.

Later the actress went to visit friends in another part of the country and seemed, during lunch at least, to be in fairly good spirits. She then disappeared for an hour or so and her hostess, Miss Simon, became concerned. Aided by the gardener, Miss Simon found Miss Bardot stretched out near a well on their property. Her wrists were superficially slashed and she had swallowed a vial of sleeping pills.

A local doctor administered first aid and tried to revive the actress who was then rushed to a hospital. After caring for her through the night her doctor released a statement saying that she was in fair physical condition but that he was terribly fearful for her mind. He reported her to be in a State of depression that was disturbing to behold, particularly in one so young and beautiful.

On her way to the hospital the star repeatedly entreated those who were transporting her to just let her die. She also referred to her child, the off- spring of her marriage to Charrier, saying that her mother could care for him if she didn’t pull through.

Miss Bardot comes from a wealthy respected French family. Her parents live in the fashionable I6th. arrondissement of Paris.

It looked like a swinging love triangle but turned out to be square!

IF BRIGITTE’S TITLE TO THE CROWN of “Sex Kitten Of The World” can be challenged by anyone, the gal for the job is Hollywood’s Marilyn Monroe. And indeed M.M. has been heating up her own share of headline on this side of the Atlantic. Her story belongs to herself and others, for she has also been linked in recent news with the new acting rage Yves Montand.

Ever since Marilyn and Yves co-starred in “Let’s Make Love” the rumors began to fly. And when the public heard of Marilyn’s divorce from Arthur Miller the whispers of a love affair between Marilyn and Yves really fanned the already roaring flame.

But reporters were unsuccessful in their search for the real story behind all the talk. They interviewed Simone Signoret and Yves to find out if there was any connection between the so-called affair and Marilyn’s divorce. At one time the actor had said that Marilyn had a schoolgirl crush on him but later denied it. In regard to Marilyn and Arthur, Yves expressed sympathy that “such nice people” were breaking up and maintained that he was sure he had nothing to do with it.

Having exhausted this source, reporters contacted Simone Signoret Yves’ wife in France. She said that if Marilyn was in love with Yves she ”showed very good taste”. Simon asserted that she too was in love with the Frenchman. She refused to comment when reporters asked if the friendship between Marilyn and Yves and the resulting publicity had placed a strain on her relationship with her husband.

NOT ONLY THE STARS THEM-SELVES, but sometimes their children, make headlines. This was true in the instance of Lana Turner’s daughter Cheryl Crane. Cheryl’s ‘problems” first came to the public eye in 1958 when the press covered her fatal stabbing of underworld character Johnny Stompanato, one of her mother, Lana Turner’s, lovers. Cheryl, then sixteen, stabbed Stompanato to death with a kitchen knife because he was “going to hurt” her mother, she told police.

Her crime was termed justifiable homicide by the courts but ever since Cheryl Crane has been making headlines from time to time. First when she was sent away to El Retiro, a school for delinquent girls, later when she ran away from the school, and still another time when Cheryl and two other girls from the school were arrested for drinking while they were on probation.

Not a day goes by without a mention in leading papers of Fisher, Taylor, and Reynolds.

ACTRESS DEBBIE REYNOLDS has provided movie writers with many a juicy tidbit. The actress first made headlines when as “the girl next door” she married the handsome and popular singing star, Eddie Fisher. The marriage was considered ideal and consequently, when their divorce plans were announced, movie goers went wild. Debbie, who claimed that she still loved her husband became a tremendously sympathetic figure and Eddie came in for some hard knocks. Liz Taylor also was the recipient of much bad publicity.

Once again Debbie came into the limelight, this time for marrying shoe tycoon Harry Karl. In the meantime Liz and Eddie’s doings were very closely covered. Their marriage might well have taken place in a fishbowl for all the privacy they received. Predictions as to whether or not they would be happy circulated like hot cakes . . . and still are. Liz’ near fatal illness kept this triangle in the spotlight, and now Eddie Fisher’s spectacular singing comeback is making news.

Read This Puzzling Story: How a Record Changed Dana’s Life!

CAR VER DANA ANDREWS HAS HAD A LİFE marked with tragedy and triumph. His drinking bouts have hit headlines for quite a few years, as have his various differences with studios. The one he’ll never for- get happened when a $159,769 damage suit was slapped against him by his bosses who asserted he was too intoxicated to work during the filming of one of their movies.

When Andrews heard about it, he told reporters, “I deny all charges. It’s ridiculous and childish. It’s a conflict of personalities”

The studio went on to claim they had to stop shooting the flicker at least 20 times on Mexican locations because Dana was too looped to work. They asked the court to free them from his contract of $100,000 for ten weeks of work.

The son of a minister, Andrew’s behavior has always been somewhat less than quiet. His taste for the grape landed him behind bars several times, the last when he was cited for drunk driving and fined $250.

Dana wasn’t always the boozer he became for a while, . . . in the thirties when he skyrocketed to stardom, he was a hard worker. When his first wife died in 1935 things changed. But now things have changed again—he no longer needs the alcoholic crutch. He is the old Andrews. No one knows why. If you ask him, he simply smiles.

We’ve investigated, back to the time he gave up the juice, and we have established a connection with another story— Dana, out of the blue, approached the Epic Record Company with an idea and they gave him the green light to record the Bible in a dramatic record called, “And God Said.” In the album he recounts tales of faith, provides narration for gospel singing, and generally simplifies beautifully the Biblical parables.

Is it possible that this record (a best seller, by the way) brought back memories of his early life with his Baptist minister father and the religious atmosphere he was weaned in and made him see .the error of his ways?

There is the evidence; he stopped when he began the record . . . you be the judge!

Headlines scream daily with news of the all-powerful ”Sinatra Clan..”

IN THE REAL “GASSER” or blockbuster category no one stands out more than Frank Sinatra. The power of his famed “Clan,” a tight in-group of Hollywood personalities, can not be exaggerated. Not a day goes by when the Clan activities aren’t in the leading papers. And their sphere of influence is not limited to Hollywood. Frank’s activities as elan leader run from organizing a benefit gala performance for Jack Kennedy and the Democratic Party which was expected to gross over a million dollars to being lord high protector for his friends.