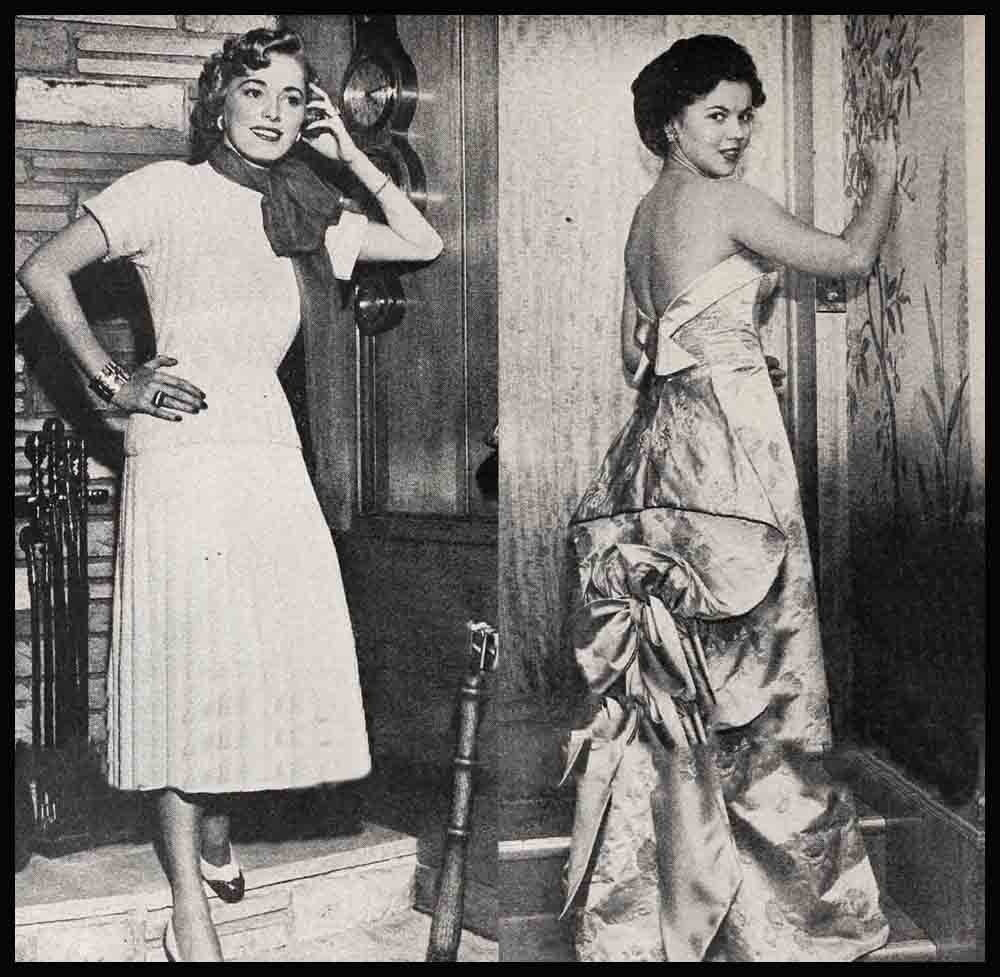 Well, kids! This has been one month when fashion shows and fashion parties far overshadowed and outnumbered the usual Hollywood soirees. Stars and starlets galore and “just plain people” turned out in droves to view the collections—some in shops—some staged with all the eclat of a court ball.

Probably the most glamorous party fashion show this season was Adrian’s. Once more he invited not only the gals but their sweethearts and husbands to see his lovely clothes and then served a hundred or more of the swank set a lavish buffet dinner at midnight in the plush foyer of his emporium. We noted Ronald Colman, Kay Kyser, Jeffrey Lynn, Clark Gable, Gary Cooper and Van Johnson, getting just as big an eyeful and enjoying it all just as much as their spouses.

Adrian showed everything from the straightest of short cocktail or evening gowns (trimmed with rows of short fringe top to bottom) to the fullest of floor-length dresses. Like Howard Greer’s recent collection, he, too, put much accent on various shades of gray; and used many sheath skirts topped by the filmiest of black lace blouses with daring bra-effects.

As always, the originals by Sophie had their predominating air of simplicity, elegance and femininity. One black chiffon dress had a few million yards in its three floor-length skirts, and was topped by a long-waisted, skintight, heart-shaped strapless, very decollete bodice. A very wide scarf of black chiffon started just below the bustline—from both sides—and was drawn up over the bust and shoulders, crossing in the back, then draped softly over the bend of the arms and hung to almost floor length if the wearer dropped her arms. This same graceful effect can be added to almost any simple, tight-waisted gown you own—whether the scarf be of chiffon, tulle or net.

Fine wool serge showed up in many of Sophie’s suits, most of which had short, form-fitting jackets, straight tight skirts

Nancy Davis is a gal who knows that the right slant on the new fashions is, by all means, slant! Saw her at Irene’s fashion show wearing a figure-flattering dress of sheer black wool, simply tailored and featuring a rather high but very obliquely slanted, shoulder-to-shoulder collar (about two inches wide) of bright lemon yellow silk faille. The skirt, rather short, was straight, trimmed only with narrow, slanting tucks of the sheer black wool and we don’t have to tell you that it was Christian Dior who “delivered” those slanting tucks.

Irene’s silhouettes went from the soft rounded look to even softer rounded looks in the matter of all suits and gowns. She showed colors and fabrics of every imaginable kind and even dresses—day or nighttime—with big puffy sleeves! Irene’s dresses featured tiers in curved, petal-like lines instead of the usual straight kind.

Good idea of Janet Leigh’s. She blew herself to a wonderful, voluminous coat of deep garnet velvet—the kind that doesn’t crush. This sort of “luxury item” really isn’t just luxury at all because with its tiny collar, baggy sleeves, calf length, hanging straight in front and flaring in the back, it looks equally well over daytime dresses of almost any color and even some “dining out” suits.

Nobody’s closet should be minus a rather elegant skirt of black Lyons velvet this season. Whether the skirt be gored and full, or tight-fitting, its uses are so many! Whether topped by a tailored crepe or satin shirtwaist” for lunch or daytime doings; or whether it goes dancing or dinner-ing beneath a lacy or nakedy blouse of luxurious material, such a skirt is the perfect wardrobe asset.

Jeanne Crain grabbed herself one cut very full around the bottom but snug at the hips. She wears it with a low-cut tight-fitting bodice of pink satin, around the shoulders of which goes a soft scarf of black lace that ties in front. For evenings, of course. But Jeanne even strolls the studio lot in this same skirt, topped by bright red or green velveteen cardigans.

So the clothes line goes this season—with so many varieties of style that no smart gal can fail to pick a winner.