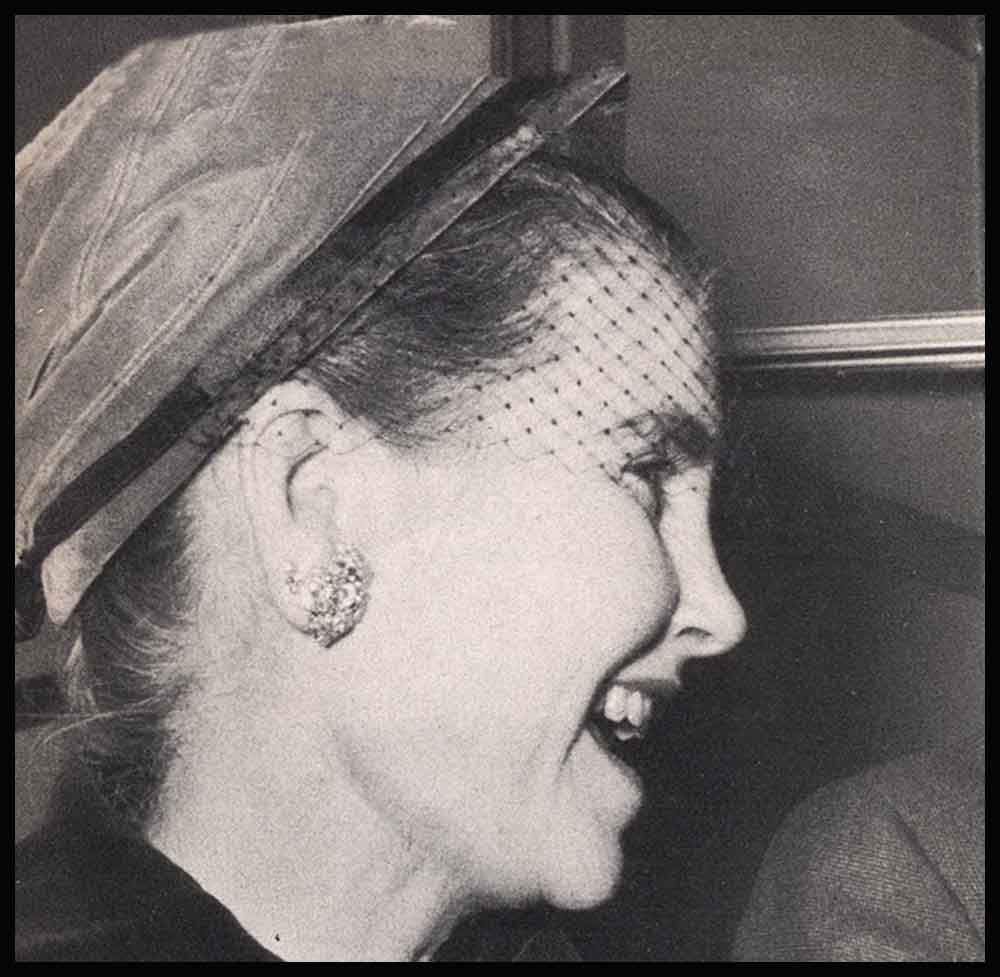 What Barbara Hutton And Doris Duke Learned From Their Music Teachers?

In CASE Porfirio Rubirosa, retired Dominican diplomat and playboy champ, is wondering whatever happened to his second and third wives, here’s the answer:

And Barbara Hutton is learning to strum a guitar.

This information may surprise you, Rubi, because YOU know Doris has been an accomplished pianist for years—so good she once tickled the ivories in a Paris bistro. You also know Babs isn’t exactly the beatnik or hillbilly type usually associated with guitar-plunking.

But every girl has to have a hobby. And though Doris and Babs aren’t as young as they used to be, they’re still young enough to want to learn. Especially when their teachers are handsome young men.

When Doris visits her estates in New Jersey, California, Hawaii and France, she takes Arthur along to make sure her keyboard doesn’t gather any dust.

And when Barbara goes gadding about Europe and the East—Near, Far and Middle—Lloyd strings along with his trusty guitar. He also plays polo, tennis and golf.

Between them, Doris and Babs are worth roughly $500 million. Doris, who inherited a $300 million tobacco fortune and added several millions to it through investments, is the richest woman in the world.

Though she is out in front of Barbara financially by $100 million or so, she is far behind in the matrimonial sweepstakes. Doris has had only two husbands — society playboy H. R. “Jimmy” Cromwell, who sought $7 million alimony, but settled for $1 million cash, and the aforementioned Porfirio.

Barbara, of the Woolworth dime-store millions, has been married six times.

BESIDES Rubi, the Playboy Prince, her mates have included a Russian Prince, a Danish Count, a German Baron, and movie king Cary Grant.

Her last husband was Baron Gottfried von Cramm, a Champion tennis player and convicted homosexual. Though “Gottsie” preferred boys, Babs once said she had “loved him for 17 years.”

Married in 1955, they separated in 1957 and were quietly divorced last year without a whisper of publicity.

“We had been friends for such a long time that we decided it would be right for us to marry,” Gottsie said recently. “Well, we did marry and it was a terrible mish-mash. We could not coincide our ideas.

“The tragedy is that the marriage ended our friendship. All those years we were friends. Now we don’t even see one another.”

According to mutual acquaintances, Barbara tried to persuade Gottsie to consult a psychiatrist about his lavendar love life. But the Baron was perfectly happy with his gay existence and queer outlook. Be- sides, he felt he was too old to switch to females.

Certainly she had no illusions about the ball-chasing tennis star. But after such handsome and debonair hubbies as Rubi, Cary Grant and Count Haugwitz von Reventlow, she wanted a mate who would be impervious to the enticements of other women.

She certainly remembered how Zsa Zsa Gabor stole Rubi from her on their honeymoon and broke up her brief but costly marriage to the dusky Dominican. Or how matinee idol Grant was mobbed by his female fans whenever they went out in public.

Certainly Babs wouldn’t have to worry about Gottsie taking off after another woman.

For a while, the Baron and Baronees lived blissfully in his castle on the Rhine and her palaces in Tangier, Switzerland and the French Riviera. Then their mutual hobby—collecting attractive young men—interfered with both the marriage and their 20- year friendship.

When Babs netted an exciting specimen, she didn’t dare bring it home to show it off to Gottsie. Von Cramm, in turn, was equally careful not to display his butterfly boys where Barbara could get at them.

So he stayed in Germany while she went traipsing off around the world with a parade of tali, tweedy travelling companions.

ONE of the first of these global escourts was Philip Van Rennselaer, a good-looking youth who was born around the time Barbara was taking her first trip to the altar. A member of one of America’s oldest and most socially prominent families, Philip toured the Continent, the Orient and North Africa with bubbly Babs.

When they returned to New York, he informed his Cafe Society pals that he and Barbara planned to marry.

But when society columnists asked her about this rumor, Babs said she already had a perfectly good husband in Germany and had no intention of trading him in on a new model.

Philip’s last trip with the Woolworth heiress was a flight to Acapulco. But it was a foursome, not a twosome. Without Consulting Phil, Barbara had invited two other young men along—Jimmy Douglas, son of the former Air Force Secretary, and a lad named Roderick Coop.

A few weeks later, Philip returned to New York alone. And Jimmy and Rod joined Babs on a trip around the world—an arrangement that must have made her limp-wrist spouse turn green with envy.

PERHAPS because he had musical talent, Jimmy became the new young man in busy Barbara’s life. Coop eventually came back to the States, leaving Jim and Babs to continue their journeys without him. For a while, they settled down in her fortress-like mansion in the Casbah of Tangier, where she composed poetry and he accompanied her verses on the piano.

It was all so refined and romantic.

“Barbara has led a very unusual and extraordinary life,” said Jimmy at the time, with gentlemanly understatement, “a life in which she has experienced a great deal of sorrow and has been ill for some time. But now I think she is better than she has ever been before.

“She sometimes reads poetry to me, and I play the piano for her, mostly Chopin.”

They had a cozy little idyl while it lasted, but Babs soon tired of their poetry-and-piano duets. Seeking new inspiration for her verses, she switched from piano to guitar.

But if he plays his guitar right, who knows? He might hit the million-dollar jackpot on the dime machine.

At the mid-century mark, Doris Duke also is working hard at her music lessons and her collection of upstanding young fellows.

As we mentioned before, youthful Arthur Simmons is her latest piano tutor.

He succeeded Joe Castro, a baby-faced, wavy-haired jazzman who accompanied the world’s richest music student on a baby grand tour of Europe a few years ago.

ON THE FLİGHT over, Doris traveled under the name of Dolly Strayhorn. Castro’s jive combo found work in a third-rate Paris nitery and Doris regularly sat in on the piano, wearing a black wig and dark glasses. She was known to the cool, cool customers simply as “Katherine” or “Castro’s friend.”

In Geneva, Switzerland, a photographer spotted Doris boarding a plan for Rome with Castro and a saxophone player in his band. When the lensman tried to snap a picture of the incognito heiress, one of her escorts hurled a full bottle of cognac at him.

Doris and Joey made beautiful music together all over the Continent before she got bored with being his kitten on the keys.

Besides her interest in music and musicians, Doris has been an ardent student of such varied subjects as art, ballet, hypnotism and yoga.

A few years ago, she installed an Indian fakir in her Hollywood mansion, a hilltop hideaway called Falcon’s Lair by its original owner, Rudolph Valentino. This fakir apparently was no faker, for he taught Doris the inside tricks of yoga, cured her sinus condition and relaxed her nerves so thoroughly that she was able to sleep without tranquilizing pills for the first time in years.

WHEN he finally left her employ, she handed him a typical DD going-away present—three blank checks, containing only her signature. Nobody but Doris, the yoga and her bankers know if he ever cashed them— or, if he did, what amounts he wrote in.

Of course, no one knows either, just what sort of a balance Doris maintained in the particular account on which the checks were drawn. But, considering the kind of money this chick keeps around, it could easily have turned out to be a handsome gift indeed. two-month marriage were a few little wedding pres-

A blank check from Doris was something none of her husbands or lovers ever received. But her first spouse got a tidy $1 million settlement. And Rubi, her second, received a modest “pin money” allowance of $25,000 a year from their 1948 divorce until he married Babs Hutton.

Rubi boasts that he “never took a çent” from Babs, never even tried for alimony. Ali he got out of their or, if he did, what amounts he wrote in. ents—an airplane, a string of polo ponies and other trinkets worth an estimated $2 million.

And he didn’t even have to play piano or guitar.