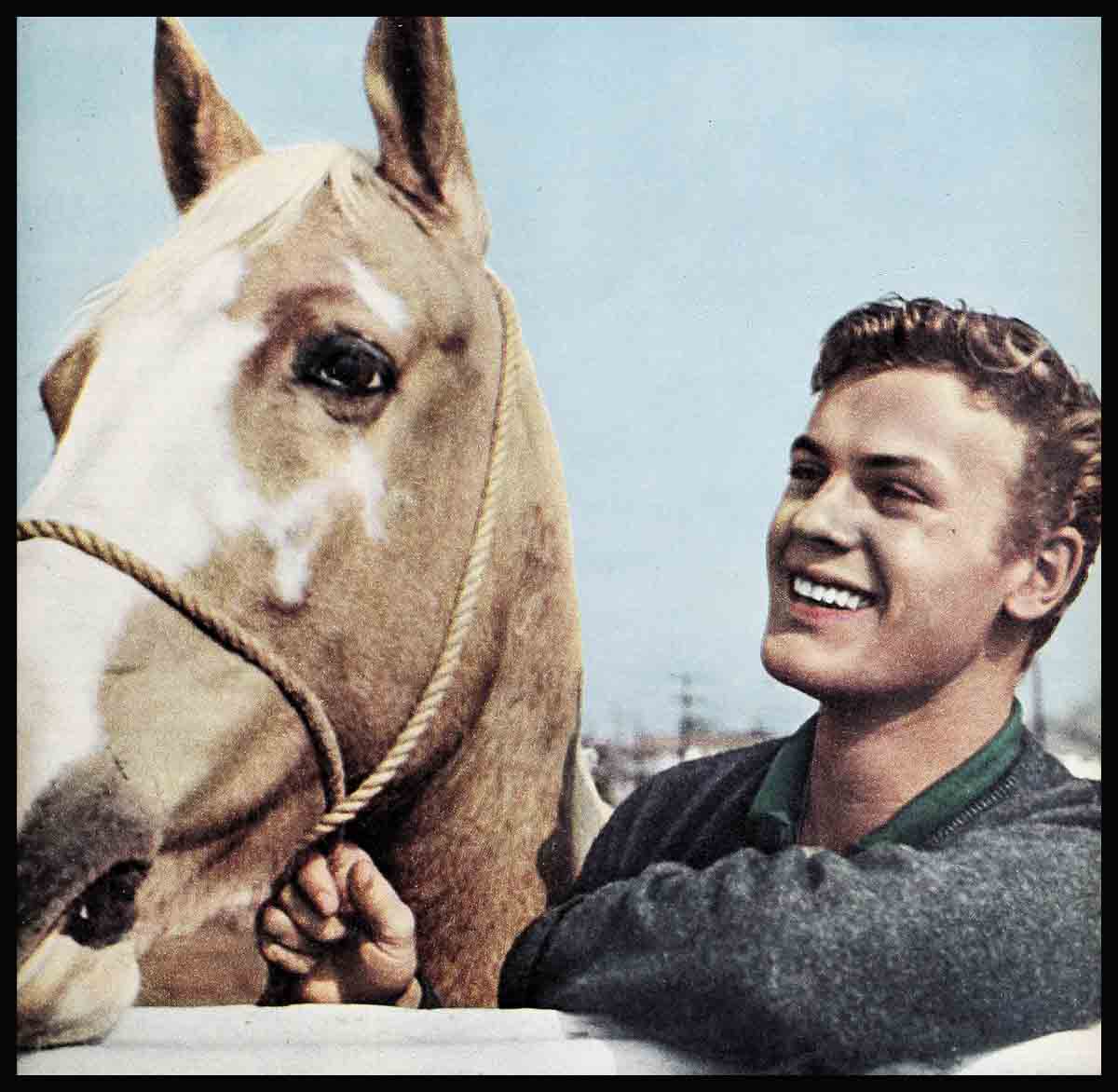 So your steady hasn’t called for days and your heart is broken. How can you be sure it’s broken? When you’re fifteen or eighteen, do you know what your own heart is? I didn’t when I was that age. And I’m not so certain that I do now. I’m still busy finding out.

You see, the first date a fellow and a girl have is sort of an experiment—on both sides. The second date is a check-up on pleasant impressions you got the first time. After that, some men will ring a girl constantly, date her every night. Sometimes this leads to marriage. My own brother, Walt, who’s eleven months older than I am, met a wonderful girl, dated her once, began going steady right away and married her three months later. And they’re living happily ever after.

But it doesn’t always work out that smoothly. Suppose a man has been rushing you for a week or a month, calling you every hour on the hour—and then, suddenly, not a word from him. You think it’s something you’ve done, or (more bitterly and falsely) something you haven’t done. You feel as if your world’s come to an end.

At fourteen, when I first began dating, I didn’t have the slightest idea what sort of a girl I wanted. But I got a big-time crush on a girl anyhow. She loved horses. I loved horses too. So we dated and we talked horses. Nothing but horses.

The year after that, I lied my way into the Coast Guard. When I came out, I guess I was a different guy. I took up ice skating in a big way. There was a girl at the rink who was as crazy about skating as I was. So I dated her, and we talked skating. Nothing but skating.

And the process of change went on. I got interested in acting and began taking drama lessons, and finally I was discovered for pictures. Now I talk pictures. When I’m with Debbie Reynolds, we talk pictures and acting and picture-making. When I’m dating Lori Nelson, we talk Hollywood and diction and how to handle our next roles.

Is that the end of it? Have my interests stopped shifting around? Have I finished growing up? I don’t think so. When I went on the road in “Our Town” with Marilyn Erskine, I found myself talking about Life. Yes, Life, like that—capital-L stuff. I know older people smile when you say that. It’s supposed to be sophomoric—but, unless you’re ‘way ahead of your age, what else are you when you’re twenty-two? I don’t believe I’m ready to get my diploma in this school yet. I’m still learning.

So your ex-steady has dropped one mirror and gone looking for another. What do you do about it? If I were a girl in that situation, I certainly wouldn’t sit around home, feeling sorry for myself, waiting for the phone to ring. You might try calling him—once. Suppose his family tells you he isn’t home. Or, if he has a job where he can take a call, you get that old “He’s out” bit. And he doesn’t call you back. Then let him go!

Let him go, and don’t brood about him. Instead, do some useful thinking. If you can recognize mistakes you made last time, you can profit by them next time. Believe me, there will be a next time. Look ahead, and keep in mind several things that make a fellow run fast—either away from you or after you. I’ll give you my own viewpoint, but remember that men aren’t all alike, no matter what the old saying says.

Don’t show that you’re serious before he’s sure that he is. I don’t mean it’s wrong to phone a guy. I don’t mean it isn’t wise to let him know you like him very much. But never let him get the impression you think he’s hooked. Then he’ll have to prove that he isn’t.

For instance, if I’m taking a girl home, I don’t like to hear her say as we part, “Now you call me tomorrow. Now you be sure.” I’ll call her—if I want to enough. But if she orders me to, I won’t.

As for a girl doing the phoning, this I don’t mind—if she has something to say, even something as simple as: “Joe Smith is giving a party next week. Would you like to go with me?” It’s nice to know you’re wanted. But the girl who telephones and says, “Oh, Helloooo,” all gurgly, wanting me to guess who this is, and how am I and when is she going to see me—she’s had it!

Lori has often phoned me and said, “Oh, Tab, there’s a picture playing downtown, and it’s so beautifully directed. I think you ought to see it. And there are a couple of performances . . . really—” With that, we’re off on our favorite topic, and usually finish by setting up a date to see the picture together.

Too many mothers have told too many daughters that any friendly advance toward a boy is too much. Actually, just sitting around and being a girl is likely to get you nowhere. That’s often a failing of especially pretty girls who do nothing but wait to be admired. You’ve heard about Hollywood beauties who stay home, night after night, alone. I know why—in a couple of cases, at least. Once, I made a date with a real glamour girl. I was looking forward to a wonderful evening. Then I found that after I said “Hello” she was stuck for an answer. The second time, I was the young man who wasn’t there. On a date like that, you can’t learn anything about the girl you’re with—or about yourself.

Is it enough just to be a good listener? Of course, a girl should listen when a fellow’s saying something worth listening to. Of course, she ought to keep her mind on him and not on the boy at the next table. But who, except a goon that no girl would enjoy dating, wants to conduct a monologue? If I were a girl and I had to listen to a man talking uninterruptedly about himself, I wouldn’t just sit, I’d tell him to go cut a record.

Marilyn Erskine’s likely to come right out with whatever she’s thinking, and often she doesn’t agree with me. We’ve had plenty of discussions—not quarrels, but real talks—considering a subject from both sides. This I find very stimulating. I don’t believe modern men like dumb girls. Not that you have to be a great brain to talk well; it’s enough to show genuine interest in what you’re saying and what he says in reply. An exchange of ideas and opinions is half the fun of a date. Right now, you can look forward to meeting another boy whose thinking will be different, whose talk will take you a little further along in your growing-up stage.

I guess I like honesty all ’round. For instance, I think it’s just good manners for a girl to be ready to leave when I call for her. If you’re held up for any reason, there’s always the phone. You can say, “Please pick me up ten minutes later than we agreed”—or an hour later, or whatever it is. In Hollywood, because of our work schedules, we often have to do that. Everybody understands, so everybody has the manners to phone. Don’t let your date sit around, making artificial conversation with your parents. He’ll be thinking how comfortable he could have been at home—or out with another girl.

It’s all a question of taste and circumstances. Maybe you think you couldn’t hold onto your steady just because you didn’t have the right clothes. You had the wrong boy—for you. That’s all.

Me, I like a girl who dresses very simply. I’d rather see a girl wearing a plain black dress with a little string of pearls than almost anything else. I hate fussy formals. But this doesn’t mean every other guy does. Watch how a boy dresses, and you’ll have a pretty good idea how he’d like to see you dress. I love to see a girl in good sports clothes, because that’s what I like for myself.

I’m a great believer in sports. You don’t need a date to go swimming or golfing or skating. If you don’t know how to do any of these things, why not learn? Any sport takes your mind off your troubles. It makes you feel great—and when you feel great, you glow, and when you glow, some new man is going to look your way. This I guarantee.

But follow your own tastes. I think the big thing every girl should learn is how to be her most vivid, individualized self. This is one reason why I enjoy being with Debbie Reynolds. She’s always herself.

You have to be yourself. But you can learn just who you are only by growing mentally and socially. Once you realize that, you won’t give up just because one certain boy kissed you goodbye. Consider he did you a favor by making you grow wiser. And the smarter you are, the bigger guy you can land because you’ll have more to share with him.

Me, I think life is terrific. I want to live it up every minute, and the only way I can is to be as wide open to learning and growing as possible. This should go double for a girl because a man is actually the greater dreamer. He wants a girl to inspire him. For the girl who does, he’ll perform miracles.

So forget the one that got away—and—your sights. That’s all you’ve got to do.