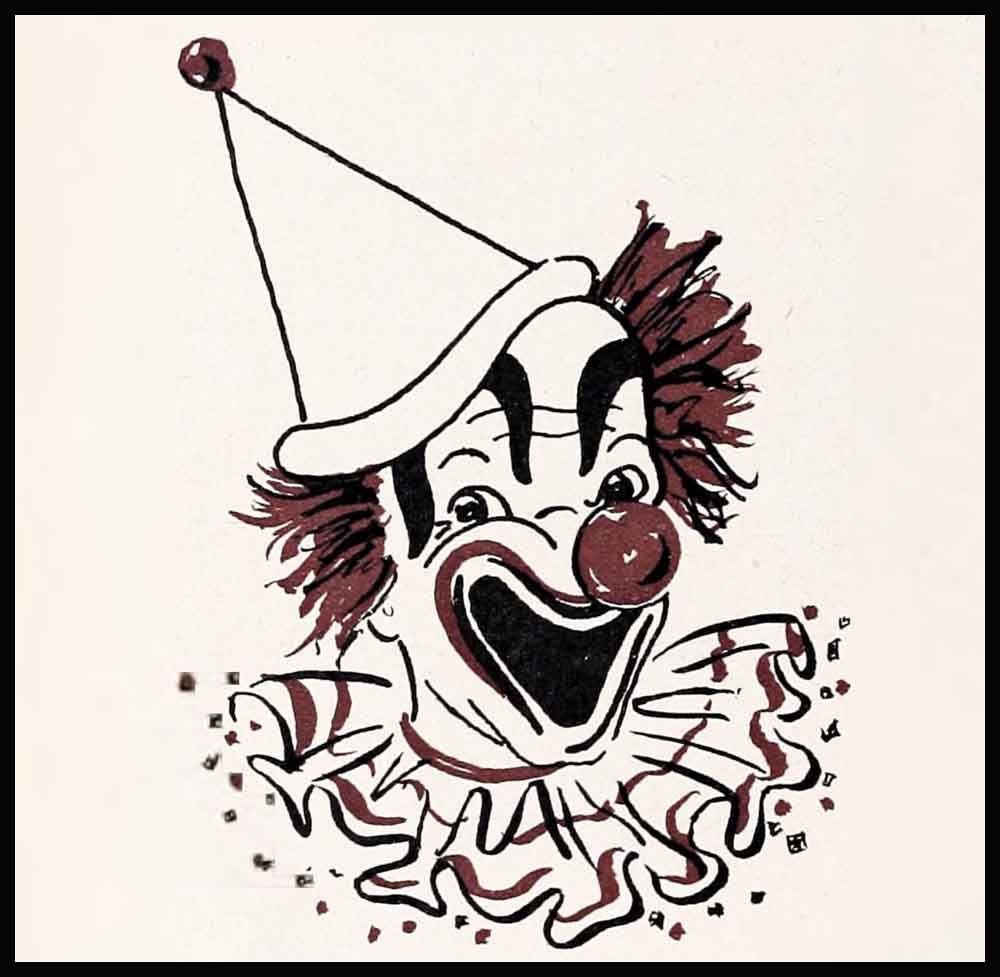 Dear Sheila, Guy and you too, Bridget. We Calhouns—Rory and I, and Cindy, too-—thank you! Since you’re the folks we love the most, we’re glad you had such a good time at our birthday party for Bridget. But we bet you didn’t have half so much fun as we had. Or our Cindy! Kory says to tell Guy he still aches from parking cars and carrying kids piggyback. How’s Guy’s bruised shin? Better. we hope.

Yvonne (De Carlo) called this morning to tell me about the blooming romance between her little Bruce and our Cindy. Sheila, you and I missed the whole thing—we never did get out of the kitchen! (I’ll never look at another plate of chicken salad again—how ’bout you?) Remember Cindy’s little red leather purse—the one you gave her at Christmas? (She takes it everywhere.) Well, Brucie took a fancy to it and made a barter deal. Seems he wanted to take it off her hands in exchange for a red apple, and Cindy let the male rule. (She loves red. “So she hasn’t any business sense,” I said to myself. “At least she’s beautiful.”)

But maybe Cindy wasn’t so dumb, after all. For later in the afternoon, Yvonne discovered Bruce shaking the purse, playing bean bag with it and throwing it around like mad. Even though the catch didn’t work and Brucie couldn’t open it, he got the biggest charge out of listening to those few coins jingling! A financier, maybe? At one point Cindy asked for her beret, which was in the purse. And when Yvonne told her where it was, her lower lip began to quiver a little. So Yvonne started to look for Bruce but by now he had vanished into thin air. (Are you sure there were no magicians at the party?) She finally found her pint-size purse-snatcher in the cedar grove, riding one of those pinto ponies you people imported for the occasion, and waving Cindy’s purse above his head, yelling, “Yippee!!” And did Yvonne ever have a time getting it away from him. She told me he wouldn’t give it up until yesterday. So she’s dropping it off this afternoon on the way to the hairdresser’s. By now, Cindy’s probably forgotten the whole episode! What a life.

Another call from Ann (Jeffreys) Sterling. She loved Bridget’s little white eyelet embroidery dress. Also the idea of having the table favors as the only gifts. She says, and I’m inclined to agree with her, that too many presents spoil the party—and the kids. How nice—no battles over who got the nicest gift, like last time. I told Ann the swan favors with the gold coronets were made of real feathers. That’s right, isn’t it? (She’s interested in getting some for a card party she’s having.)

By the way, we now have the answer to our party puzzle—why little Perry Damone was so terrified when your wonderful clown greeted him at the door. Pier (Angeli) says it goes back to one afternoon when Vic took Perry to a rehearsal at the Moulin Rouge to see the place where Daddy works. As Vic sat Perry down at a ringside table, and the rehearsal was about to start, a clown from the chorus came up to Perry and tickled him under the chin, with a long feather, laughing loudly at the same time. And you’ve never heard such screams! Poor Perry had never seen a clown before and was terrified.

But I think the best idea of the day was yours. Sheila. Not organizing games for the kids really worked. There never was any need for them, was there? Rory and I are reminded of this almost every day, too, it seems. The morning after the party. he had to get up bright and early to report at the studio. It was so early the sun hadn’t come up yet, and as Rory groped his w av around the pitch black upstairs hail, POP!!—he accidentally stepped right on a stray balloon, dead center, scaring the sleeping daylights out of Cindy and me. Needless to say, we both woke up instantly, and after Rory and I had a good laugh, we had some picnic stopping Cindy’s tears. She was really frightened.

Then, the following weekend, while Rory was out back puttering around the yard, I hear, “Lita, come ’ere. Something from outer space has invaded the premises!”

I came outside, and did we laugh when Rory pointed to a high-up branch of our favorite hickory tree. There, sitting calmly, big as life, was one of Cindy’s toy stuffed animals—a monkey! One of the guests must have had the strong arm of a discus thrower or been some climber to get it up there. I loved Rory’s blase comment: “Let’s leave it there for the next shindig.”

The ponies haven’t recovered yet, either. So we’re sure you agree that us “old” fogies with our “square” games would have been strictly for the birds—at this occasion, at least!

Guy, has Sheila had time to tell you about all the fun you missed while you and Rory were off loading the movie cameras? As you know, your little Dolly’s only used to sitting in high chairs, but since this was such an important party we decided to let her sit at the regular table with all the other kids. So Dolly was seated next to our Cindy and everyone was eating nicely—Dolly, content at first with her bottle of milk. Then Sheila and I made the big mistake of leaving the room for a minute and when one of us returned, we discovered Dolly had snitched ice cream from four other children’s plates!

Then, when peace was restored, and everyone was eating ice cream and birthday cake, all of a sudden I noticed three or four of the swan favors were missing. Sheila and I had set the tables and we knew we had put down enough of everything.

Then, I happened to look under table! There, on the floor, right at the spot where Dolly was sitting with Cindy and Bruce Morgan, were all the missing favors! While no one was looking, it seems Dolly had been taking the swans and one by one, hiding them under the table. Some sleight-of-hand artist, your youngest!

And Guy, thanks for being so wonderful about rounding up the fathers, and for taking movies of everything that happened—Rory tells me he appointed you chief camera operator while he lined up the shots. You know, I can vaguely remember Rory shouting, “Okay there, buddy, make sure you get plenty of light there. Don’t forget, I’m buying half the prints!” That’s our boy, always giving directions, I thought to myself, but was too busy to hush him. (Rory has just yelled at me, quote, “Ask that so-and-so where are my prints!” !!)

Well, you nice people, I guess this is a rather long thank you note to answer your thank you note. But we wanted you to know what fun we all had! I’ll phone Saturday, Sheila. Maybe the four of us can get together for a grown-up party—we still have a few unused balloons and slightly used swans lying around.

Love from us all, Lita

P.S. Next time, Sheila, let’s not have paper table cloths. Let’s try something the children can’t tear to shreds. A nice sturdy linen, or better still, maybe Sears and Roebuck has cast iron ones!