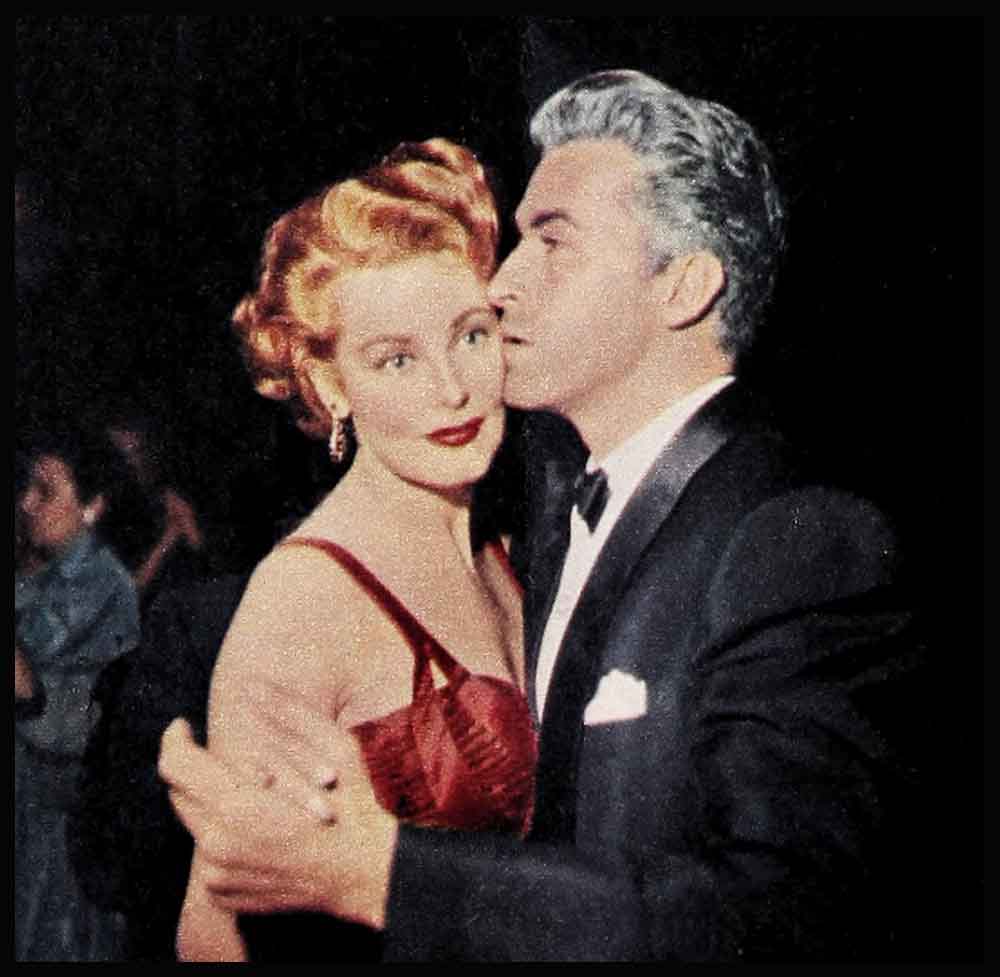 Guys and Dolls: Although there wasn’t a romance between Barbara Stanwyck and Ralph Meeker, he called her first when the New York Theatre Guild signed him for an important play. Incidentally, Barbara is working harder than ever before in her career. After finishing the story of the Titanic sinking, she is scheduled to do two more pictures in quick succession and nary a moment for rest . . . The oh-so-beautiful Lana Turner and Lex Barker are now dating openly. However, local skeptics are of the opinion that they aren’t serious, not Miss T. anyway. She has confided to intimates that she tried harder than ever before to make her marriage stick with Bob Topping. She doesn’t want to lead with her vulnerable heart all over again . . . Fernando Lamas and Arlene Dahl are doing a picture together; bets are even they’ll end up as Mr. and Mrs. . . . When Zsa Zsa Gabor was in England there were rumors she’d lost her heart to a titled Londoner. But Zsa Zsa’s telling everyone now she Ioves only her husband, George Sanders.

Undressing Rooms: Doris Day is taking her slow sweet time deciding whether she’ll remain with Warner Brothers. With final option time practically around the corner, the anxious studio is proffering tempting goodies, current one being an elegant new dressing room complete with ceramic doves cooing on the roof! . . . Marilyn Monroe now has the number one dressing room on her lot and while the local ladies of the contract ensemble are holding their tongues, what goes on in those pretty heads is something else again! Jeanne Crain for one, Waited years before she finally rated a place in the star dressing-room building.

It’s True That: Filmtown is distressed over the Anne Baxter-John Hodiak marriage breakup. Their joint statement that the decision to separate “is a painful one,” gave this sad news added poignancy . . . Steve Cochran has a new name for the house he lives in. After his own self he whimsically calls it—“Cock Run” . . . Robert Wagner’s public won’t be having those intimate peeks into his new apartment. Because he will share it with his parents when they’re in town, Bobby boy’s issued a no-photographs edict . . . Before he left Hollywood, Marlon Brando braved the cold Pacific and taught himself to surfboard ride by practising with an old-fashioned ironing board! . . . When Shelley Winters called Vittorio Gassman in Italy to tell him the doctor had definitely named the day the baby would be born, her excited husband exclaimed: “What time?”

Embarrassing Moments: Ann Blyth asked Cal to print this story and hopes Martin and Lewis read it. Appearing with the famous comedians on their radio show, the beautiful one lost an earring. She was so upset Dean and Jerry got on their hands and knees and hopelessly combed the studio. When gentle Annie got home and opened her purse—there was the missing bauble! That’s when she remembered she took it off in the phone booth. Brave gal that she is, Ann still can’t face the ribbing she knows she’ll get if she calls up those magnificent madmen.

Shorties: Marilyn Monroe has the answer for those who criticize her best undressed pictures. “What about girls in Bikini bathing suits on the public beaches? At least my reasons are professional!” . . . Debbie Reynolds won’t fail the boys in Korea. She sewed lace ruffles on the dungarees she has to wear while strutting her talented stuff . . . Poor Tab Hunter had to let his hair grow for “Johnny Ringo,” then waited four weeks until the picture started! . . . Mutual friends are rejoicing that Olivia de Havilland and Joan Fontaine are burying their hatchets.

Odd Man Out: The many who are fond of John Wayne feel very sorry tor him. Some say his estranged wife (Esperanza) is having him followed day and night by detectives. One report had him dining out with his four children he worships, when little Melinda suddenly threw her arms around his neck and exclaimed: “Oh Daddy, I do love you!” The big fellow supposedly whispered back: ‘I’m glad. I need love right now.” Speaking of the Wayne children, Michael, the oldest, turned military age recently. They’re great kids and their mother (Josephine) has done a fine job raising them.

Production Palaver: On the coldest day of the year Jeff Chandler had to wear shorts in a jungle scene for “East of Sumatra.” Because the goose bumps on his hare legs photographed like golf halls, they had to re-shoot the scene when it turned warmer!

One Man’s Opinion: Faces were rather red at Denise Darcel’s small dinner party. Esther Williams’ nice husband, who was castigating foreign actors in Hollywood. seemed unaware that the James Masons were amongst those present . . . In John Payne’s book, he informed pals at a party, there are exactly three male stars with virile acting ability. Clark Gable and John Wayne are the other two! . . . According to Jack Benny: ‘I’m a big star in England—unless my good friend Danny Kaye happens to be in town.”

No Love Lost: Not a word leaked out, but it seems they’re not too happy with Ginger Rogers over Paramount way. Inside sources insist she wouldn’t stick to the script of “Forever Female,” which she okayed. True or false, ’tis said the smart Miss R. has a contract clause stipulating she must never be photographed minus lipstick or eye make-up. Since she was supposed to look like an aging actress in the final scenes, they were forced to write a new ending!

Love Talo: Just how presumptuous can local columnists get in announcing Frank Sinatra will go back to Nancy? In the first place he’s married to Ava Gardner and despite discord, mad about the girl. It was torture for him to leave her in Africa but he had to fly back and test for “From Here to Eternity.” When Ava was flown to London and hospitalized with an African germ. Frank nearly blew his top. To get back to Nancy: Did it ever occur to these columnists that she might not care as she once did? So typical of her forthright quality, at a party recently she saw Ava in person for the first time. Nancy took a good long look and said. “I can’t see a single thing wrong with her!”

Wishful Thinking: Garbo confided to intimates that two requisites could bring her back to the screen. The first (natch) is a good script. The second? Montgomery Clift as her leading man! . . . If the “King” leaves M-G-M. as rumored. Clark Gable and Joan Crawford, who were one of the greatest box-office teams, may reunite in an independent Western.

Inside Hollywood: It’s these untold stories that give Cal his biggest kick. When Judy Garland attempted self-destruction during the darkest period of her life, Bing Crosby came forward and insisted she sing on his show. Yes, it was a break for him, but it also helped take Judy’s unhappy mind away from her problems. She never forgot Bing’s kindness. Recently, when Dixie Crosby passed away, practically the first message to reach Bing was an offer from the great Garland to substitute for him on the air. She did and how!

Bunny Tale: So you can’t afford a mink coat? Well, you can still look like the most glamorous star in Hollywood. thanks to Al Teitelbaum, who is the most famous furrier in filmland. At popular prices yet. Al’s created colored rabbit-fur coats that have the town in a tizzy. Mrs. Gene Kelly took a green one to Paris and dazzled the boulevardiers on the Champs Elysees. Tony Curtis surprised Janet Leigh with a led one which New Yorkers loved when they saw it and promptly sent orders to Teitelbaum’s Beverly Hills salon.

News and Views: Poor M-G-M was just beginning to relax from the Mario Lanza headache, when Red Skelton hit headlines by announcing he’d left home and was planning a divorce. Red, suffering from a painful ailment, was rushed to the hospital and at this writing all’s quiet on the Skelton marital front . . . Now that they have a six-pound son, Ruth Roman’s husband, Morty Hall, wishes she’d give her movie career back to the Warner brothers. But his talented wife says, “The ham is still smoking!” . . . He’s thirty-two, Elaine Mahnken is twenty-two and she’s wife number four for Mickey Rooney. He met the tall model (he did it again) just two months before he married her . . . Just when everyone was convinced there was smooth sailing for the Sterling Haydens, she sued him for separate maintenance and custody ot their four young children . . . Johnnie Ray is still cryin’ “No, no” to those divorce and separation rumors. Illness kept his wife in the hospital when he road-toured . . . ’Tis said the will of Dixie Lee Crosby will dispose of an estimated $10.000.000, representing halt of the fortune amassed by her husband . . . Only surprised that she waited so long, Teresa Wright’s friends are noncommittal about her divorce from husband-writer Niven Busch . . . The entire U-l lot, where she grew u, is in mourning because Ann Blyth is leaving them. At M-G-M, where she signed a fabulous new deal, they’re dusting off the red carpet.