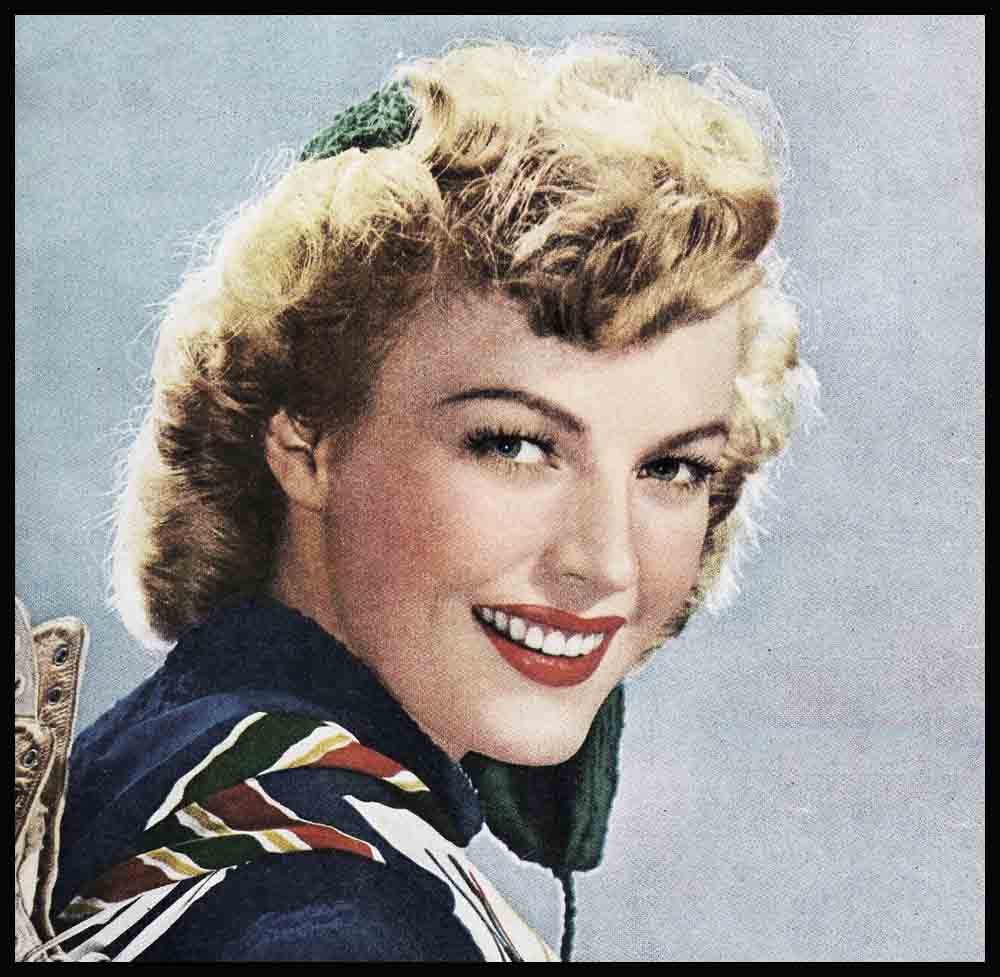 June Haver: “The Biggest Mistake Of My Life”

For two hours I have been listening to this pretty blonde girl telling me her side of her short and sad marriage to Jimmy Zito. Sometimes she laughed nervously. More often she dissolved in tears that shook her thin body. Looking back on it, ours was an interview in sunshine and showers, with June supplying all the moods.

Until I talked with her, I had been as surprised as anyone over June’s behavior. It has certainly been difficult to read her mind or to know what she meant by a sudden elopement to Las Vegas, a marriage in her Church two weeks later, then—out of the blue in two months—a separation, a quick reconciliation and finally a suit for divorce.

It was the conduct of an erratic and immature person. I was sufficiently irritated, I remember, to use June as an “example” on one of my radio broadcasts of young girls ruining their lives through impulsiveness. Marry in haste—and repent in ridicule.

Frankly, I was a little fed up with the antics of June. She was down in my book as a silly girl who had thrown away her chance for happiness, possibly for a lifetime, in a fit of infatuation.

But I am a reporter. And when I was told that June would talk to me, the first time she had opened her mouth about her troubles, I could no more resist seeing her than the well-known fire horse can resist the cliche.

So, I was ready, if slightly unsympathetic, when June arrived—and the first surprise was her appearance. I had remembered her as plump and blue-eyed. The girl who came in and took a chair near the fire was slender to the point of painful thinness and she wore suffering and unhappiness as obviously as she wore her simple blue sports suit. If she had lost a lot of her musical-comedy glitter, she had certainly gained in character. She must have lost fifteen pounds or more since I last saw her—and I said so.

“All of that,” she nodded. “It’s because I can’t sleep. I can neither eat nor sleep.”

Apparently, we were out of the pleasantries in the opening round so without waiting for further preliminaries, I said:

“How did you happen to marry Jimmy Zito in the first place? Ever since you have been a star you’ve been giving out interviews that you would think a long time before you married, that your career deserved the next five years of your time and effort, that when you married you would stay married because that is your religious belief. And then you elope with a man you haven’t seen in years.”

Maybe that was a little blunt. But it was my point and I made it.

No doubt about it, she was nervous, but she must have known it was coming and she was prepared. Even so, her voice shook a little when she replied, “I’ve asked myself those same things a million times.

“It’s true I hadn’t seen Jimmy in years. But during all that time, I carried around an ideal of him. Do you know what I mean? When I was first starting out in show business and he was new in the game, too, we seemed to be the same kind of people. We were young and ambitious and we both wanted the same thing—success. We were in the same band, you know—I, the singer, and he a musician.

“I loved his family. They seemed to have the same warm family elan feeling we Havers have. When we were separated by our work and I came to Hollywood, I still remembered what wonderful times we used to have together. Most of the men I went around with here seemed to be typical bachelor types. Foot-loose and fancy free. Night clubs and premieres. There was none of that party-at-home, spaghetti-dinner affairs that Jimmy and I used to enjoy.”

Tears were there now, almost ready to spill over. But she went on.

“And then,” she said, “last year I went back home to Rock Island. I saw all the girls I had gone to school with happily married and with babies so cute and fat you could bite them. I’ve always wanted a baby. All of a sudden it seemed that all the things I really wanted in life were slipping by. Frankly, I wanted to get married. And, it was right at this time—”

“The psychological moment?” I prompted.

“The psychological moment,” she repeated, “Jimmy came back again. A reality this time—my ideal walking back into my life and my thoughts.”

She fell silent as though she had reached a place in her recital where she couldn’t go on. And I felt, for the first time, that June was being honest and sincere.

“And he wasn’t like that ideal?” I tried to help her.

She almost hurled herself out of the chair and started walking up and down the room.

“Oh, I can’t talk about it,” she sobbed. “It was awful. I want to forget as soon as possible.

“We hadn’t been married hours before I realized I had never really known Jimmy. He was a stranger. He was either down in the dumps or up on high. I never knew from one moment to the next how he would be. Sometimes he would sit for hours and not talk, just stare at me—never saying a word.

“I wanted so much to make a success of my marriage even when I knew in my heart it was no go. I returned to him because I thought it was the right thing to do. It was my religious belief that I should stay with the man I had married.

“Even my studio did not know what I am about to tell you now. They thought we were definitely parted. But, without saying a word to anyone I joined Jimmy and his orchestra at Grand Pass, Oregon, and for ten days I traveled with them. Oh, those one night stands! What a dreary, awful time.

“Night after night, I drove Jimmy from place to place. One night we had a 440 mile jump. All that way, he never said a word—just sat there. I tried to talk on any subject. But he wouldn’t answer. Mile after mile of silence—I thought I was going to have hysterics.”

She had sat down again and seemed to have better hold of herself.

“But I stuck along—and finally we came home. We moved into an obscure place in a Santa Monica motel.”

Once again, she had reached one of those places where she couldn’t go on. I would have been stone if I hadn’t been affected by what she was telling me.

“You see,” she said, “most musicians live at great tension and Jimmy is unusually temperamental—like a taut string about to snap any minute. But I want to say his family was always wonderful to me—always. They worried about me—not about him. They worried when I said I was going to marry him. I should have realized then what a mistake I was making.”

I said, “June—why, why, why did you go through with a second religious ceremony?” I knew she is earnestly trying to get an annulment in the Catholic Church.

“I didn’t want to cheat. If I was sincere in trying to make a go of my marriage, I knew I had to be sincere in my faith. My priest thought I should give my marriage every chance.”

“And, now,” I said, “you may never marry again. What a bitter lesson this has been to you.”

She nodded. “As salty bitter as all those tears I weep into my pillow at night. But I’ve got to try to put it all behind me and pick up the pieces.

“I have put in an application to adopt a child, because the most important reason for marriage is children. And, although I have made a grave mistake, I don’t want to be deprived of a child to love. I adore my little niece, Kathleen June, who is just seven months old, and being around her has made me want one of my own more than anything else in the world. I have asked for a boy.”

“But will they let you take a child?” I asked.

“Well, I think they could look at my record. The only two things against me are my age and my unhappy marriage. I could give a child a great deal—a home, security and, above everything else, love.”

There was little sense in beating our heads against the stone wall of her marriage any longer. I wanted June to be happier. So I mentioned the great break that had fallen to her—being borrowed from Twentieth to play the life of Marilyn Miller on the Warner lot.

Suddenly, the shadows gave way to sunshine. June’s face brightened and she smiled like the kid she is.

“Isn’t it wonderful—the life of Marilyn Miller? What musical comedy actress wouldn’t jump at the chance? She was the greatest of all, wasn’t she?”

She was that—and while June hadn’t been my first choice, I can see now how she could be very good. Her sadness has given her a sweetness and mellowness that Marilyn had.

“Ernst Lubitsch told me,” she said as though she was aware of this personal change, “that no woman has lived until she has cried bitterly into her pillow.

“All my thoughts and efforts are in my work now,” she went on. “I should have stuck to what I said—that my career deserved the next five years of my life.”

“Just one more thing, on that subject, June,” I interrupted. “Do you think your career had anything to do with your trouble with Jimmy?”

She laughed outright at this. “No indeed,” she said. “He loved it. I think the thing about me that attracted him most was that I was in the glamorous movies—a recognized part of it.”

Some way I cannot feel that those miserable days with Jimmy Zito are going to ruin June’s life. She is a sunny-tempered girl. She’s living with her mother now until she gets back her health and strength.

“My mother cooks the most enormous meals to see if she can tempt my appetite,” she laughed. “I’m helping her along by playing golf—and,” she smiled, “I’m getting good.”

In a year, June will be legally free of Jimmy Zito. Whether or not she will ever be free to love and marry again remains to be seen. Certainly there are no more worries about her career. She is getting bigger and better opportunities.

And all of a sudden, I didn’t feel irritated or unsympathetic to June Haver any more.

I thought, after she had left me, “She’s paid a bitter price for one great mistake.” She seemed little and lonely getting into her car and driving away.