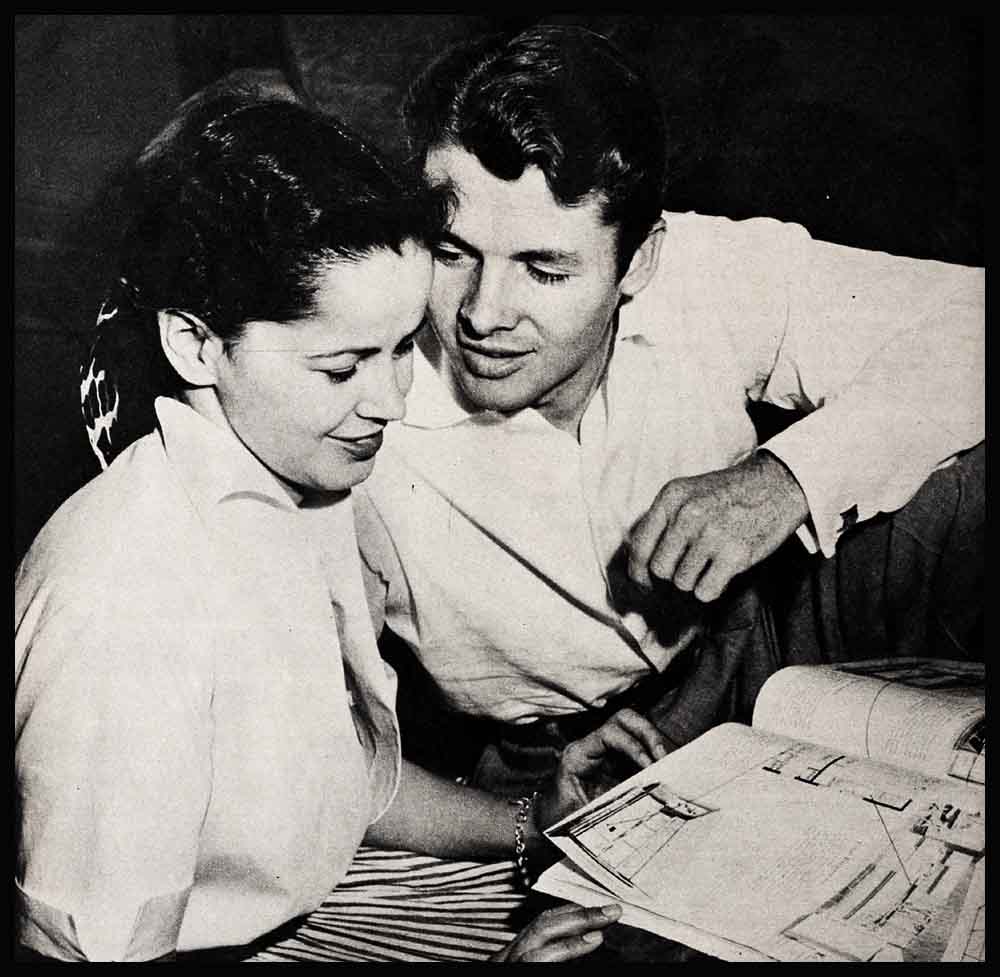 Any day now, when Audie Murphy’s divorce becomes final, you’ll read of his engagement to a girl who should have met him even before he married Wanda Hendrix—and who almost did . . .

Dark-eyed, soft-spoken, petite, Pamela Archer is an air hostess supervisor in Dallas for Braniff Airways. She has raven hair, olive skin, and quiet wisdom which bespeak her Cherokee (one-eighth) heritage. She’s a girl whose undivided heart may well provide for this restless, lonely star-soldier such happiness as has long escaped him.

And if you think the story of Audie and Pam could only happen in Hollywood—then you’ve never been to Texas.

Back in 1945, Pam Archer fell a little in love with a Life Magazine picture of the nation’s most decorated soldier. A handsome young man with dark curly hair and a round babyish face, but with eyes that had seen too much for his twenty years. “That was when I first ‘met’ Audie,” Pam drawls softly. “After that I read every line printed about him, and admired him so very much.” For two years she followed Audie’s life and career via clippings, film gossip columns, and newspapers. all the pilots and other air hostesses teased her about him. “They couldn’t help knowing how I felt—I talked about him all the time,” she laughs now.

So when Pam read one day that Audie would be guest of honor at a big square dance, to be held at his friend Ray Woods’ dude ranch, she made excited plans to attend. “And one of the pilots who knew Audie, and knew how much I wanted to meet him” promised to introduce her. She was supposed to work that night until twelve, but she left early and, still wearing her hostess uniform, drove fifteen miles out to the Woods’ place.

“And I saw him,” she said. “He looked so handsome, standing on the sidelines, quietly watching the dancing.”

Pamela, of course, looked frantically for the pal who’d promised to introduce her, but, having a gay time, he forgot. “Say, there’s a girl, an airline hostess fan of yours—wants to meet you,” he’d told Audie. But when he never mentioned it again, Audie thought he’d been kidding.

The pilot who failed Pam that night used to tease her about Audie in the three years that followed. He’d brief her on news about Audie and Wanda. They were engaged. They were married. They were rowing. They were back together. Then came the report of their divorce.

Back in Texas at this time Pam and another hostess, Gloria Knight, were making plans to vacation in California. “I’m going to meet Audie Murphy,” Pam would say. And Gloria, a fan of Farley Granger’s, insisted she was going to see him. “We were kidding,” Pam explained. “I didn’t dream I really would—”

It was a week before they were to leave that another air hostess, Marjorie McMahon, called Pam one morning at 8:30. “Guess who’s coming over,” she asked. Pam, having worked the night before until midnight, was in no mood for guessing games. “I don’t know—who?” she said drowsily. “Audie Murphy!” said Marjorie. Pam laughingly admits she came awake in a hurry, especially when Marjorie called her grandfather, Dr. W. C. Browne, to the phone and he assured Pamela it was true.

Dr. Browne had looked after Audie and the other Murphys since they were kids. Audie was coming to see him. “Tell him Gloria and I are coming out to California,” Pam said to Marjorie. “Ask him if we may contact him.” Marjorie did that and Audie left a phone number and said to give him a ring when they arrived. He would get them into a studio.

But when Pam and Gloria checked into the Miramar Hotel and called Audie, he wasn’t in. His apartment manager was French. She couldn’t understand their drawl. “Two girls phoned from Texas,” she told Audie. And he thought they were still back home.

Finally, a week of their vacation was gone, only four days remaining—and still no word from Audie. How humiliating it would be when they got back to Dallas and had to admit they hadn’t even set eyes on Audie Murphy. “We knew everybody back home would howl,” she said.

A little desperate, she put in another call. Again he was out, but this time the landlady seemed to. understand her better. And late that afternoon Audie called and made a date to take them to Universal-International for lunch.

He was just as Pam always had pictured him. “Youthful, and so modest and friendly—I felt I’d known him always.”

When he telephoned later asking them to have dinner with him at the Malibu Inn, Pam was starry-eyed, “We didn’t expect him to do anything else for us.” It was next evening, their last, that they drove along the coast to Newport. There, dining in the romantic island atmosphere of “Christian’s Hut,” Pamela told Audie she had been supposed to meet him at a square dance three years before.

“So you’re the one,” he laughed. “Why didn’t you say something?” Then, not laughing, he added, “You might have changed my whole life—”

Audie Murphy’s whole life was about to be changed even then—and he was beginning to realize it. The eyes of this Texan sight straight and fast, and he’d sized her up as his kind of girl. Quiet, a little shy, but intelligently alert, so sincere “and the most honest human being in the whole world,” he says.

Two days after Pam and Gloria returned to Dallas—with autographed copies of Audie’s book, “To Hell and Back,” to prove it was all true—Audie phoned Pam. She was alone in the house she shares with five other hostesses, and doing her scheduled domestic chore—“We each have rooms to do every week—and whoever feels like it cooks—” Because she was so excited and couldn’t think of anything sensational to say, she talked at random about everything, his book, the weather in Dallas, visibility—Audie managed to get in the suggestion that Pam drop in on the Ray Woods’s and their children—and also say ‘hello’ to his horses, “Snuffy” and “Bazooka” pastured there.

Pamela kept her long distance romance to herself. Only her housemates knew. She was always reading in gossip columns that Audie had been seen with first one and then another, “and I was afraid nobody would believe me,” she says.

Later, when he spent three months in Texas inspecting National Guard units and supervising training programs, they were together a great deal. And when Pam arrived recently for another vacation in Hollywood—it was as Audie’s girl— his one and only. She still can’t realize how much she means to him. But in that respect she’s alone. For that new look in Audie Murphy’s hazel eyes says it in spades. Even as he himself says slowly, “I can’t help havin’ a feelin’ there’s something awfully right about this.”

Pam’s open adoration would melt a stronger fighting heart than Audie’s. Actually her entire attitude toward him is exactly what any doctor would order for his inner conflicts—his orphaned boyhood, his feeling of age beyond his years, his disappointment in people he’s put on pedestals, his loneliness. “I’d rather be married than to be out on the town,” Audie himself says. “I want a family.”

Pam’s is a “Whither-thou-goest” kind of love, unquestioning, undemanding, and absolute. It’s in her face and her dark shining eyes. She will be happy in Hollywood, she says, in answer to your question. Then she adds honestly, “I’d be happy anywhere that Audie is.”

Audie’s pride in Pamela, and his happiness and contentment in her calm presence, are evident. Words are superfluous with them, which Audie, in his quiet moods, will welcome. “We don’t have to talk,” he says. In his charming bungalow, which he refers to as an “Irish apartment,” because of its green walls and wallpaper and furnishings, there are planter lamps and various homey items arranged by Pam. Audie and Pam enjoy an evening playing canasta or reading—the quiet broken only by the crackling of his fireplace and soft strains of Strauss waltzes on his record-player. They spend afternoons wandering happily through the stalls of the Farmers Market. They go skeet shooting, take long drives along the coast.

Teasingly, Audie comments, “Pamela Archer sounds too stagey—like one of the tea-drinkin’ set. Maybe we’d better change it. You’re cute, anyway. Think I’ll marry up with you one of these days—”

Their engagement will be announced on April 18 when his divorce is final but wedding plans are still a little nebulous. They will probably be married in Texas, but their plans are dependent in part too on the international situation.

Audie’s a captain in the 36th Division of the Texas National Guard, and if ever they’re ordered into active service and overseas: “We wouldn’t want to rush into things,” “We” means strictly himself. For before him is the still too vivid memory of another war, of the Army Hospital in Southern France, and the tortured thoughts of his buddy in the bed next to him, a paraplegic, Perry Pitt. How he’d worried about how to break the news to his pretty blonde wife, Theda, whom he’d married just before shoving off. And how Audie and the others talked to him, building him up to coming back to her.

But you can’t help having the feeling that because they’re so “awfully right” for each other, come May—love will once more find a way.